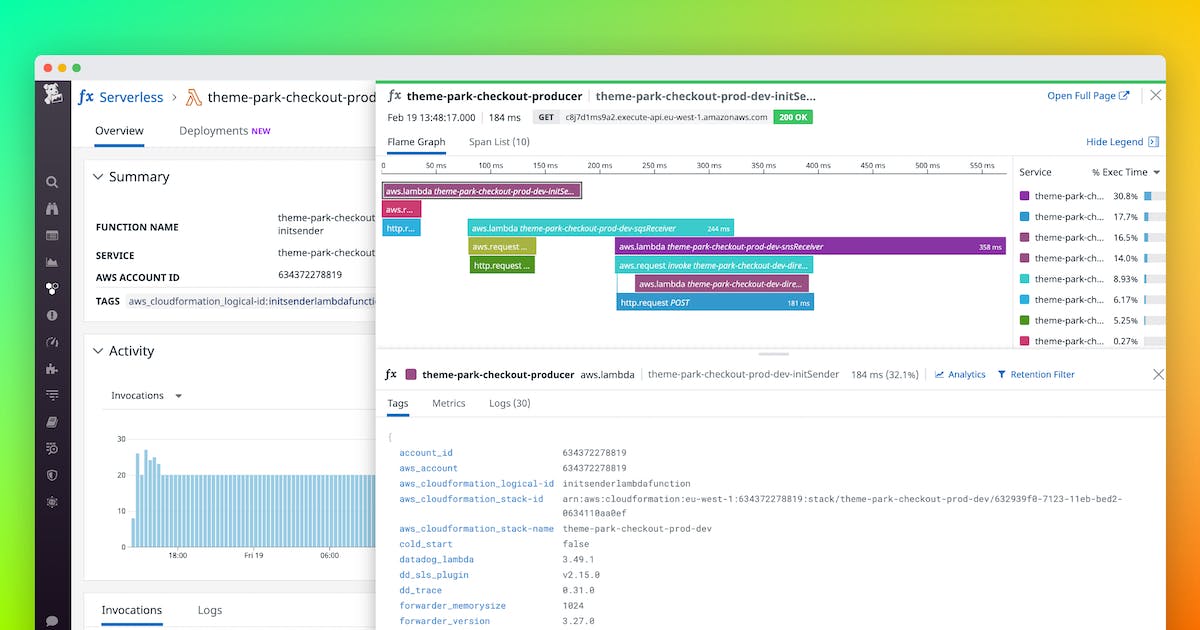 Last year, we released  native tracing for AWS Lambda through Datadog APM to provide deep visibility into serverless functions and surface performance issues such as cold starts and errors, without any added latency. But Lambda functions are only one piece of the puzzle in a rapidly growing serverless ecosystem, which includes message queues, data streams, notification services, and more. Developers often find themselves managing hundreds of  loosely coupled components that power event-driven workloads, making it difficult to trace which components were involved in any given request.

To effectively debug event-driven serverless applications, you need to understand where an issue occurred—and how upstream and downstream services were involved. That’s why today, we’re excited to announce that Datadog APM now connects Python and Node.js Lambda functions to AWS managed services all in one trace. Datadog also now tags your function spans with additional information about incoming events, which you can use to quickly search, filter, and aggregate your data when troubleshooting issues.

See Lambda functions and their triggers in a single trace

With our latest enhancements to APM, even if a request triggers multiple functions and services such as Amazon SQS and Amazon Kinesis in an event-driven architecture, Datadog will follow the entire request from end to end and tie all the components together in a single trace. This way, if you notice a spike in Lambda errors or latency, you can easily identify the root cause (e.g., malformed requests) from the exact service that triggered the function. If the triggering resource is Amazon API Gateway, Datadog also captures the incoming endpoint’s URL path, request method, and status code.