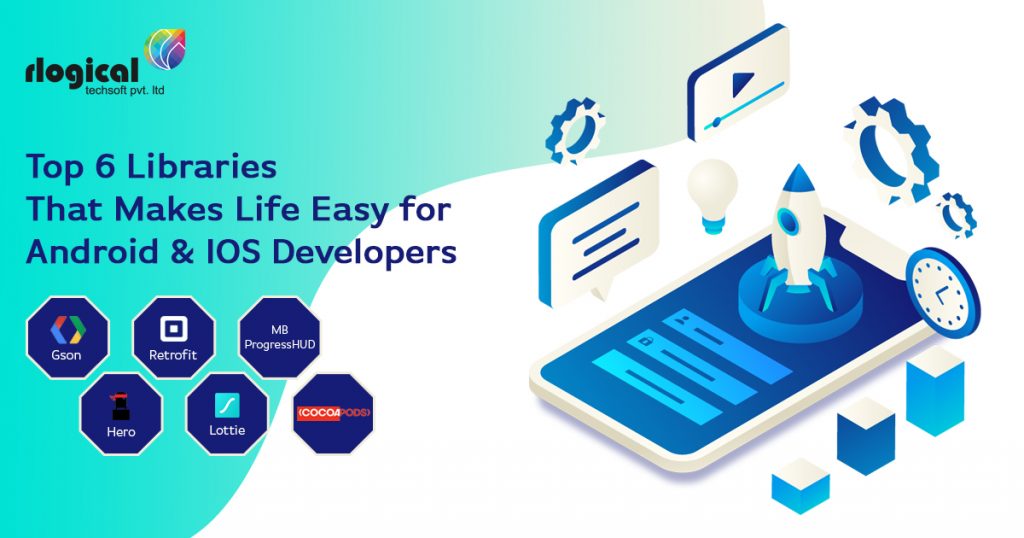 In this blog explained top 6 Android & iOS Libraries which make mobile app developer's work simple while implementing the application for iOS and Android.

As 2020 started our company made a decision to share our experience we gain on mobile app development. We have done so much work on the Android app development and iOS app development in the last couple of years. And as we can see easily, mobile phones are counted in the basic need of humans these days.

Let’s start with the libraries our developers used while they were creating the mobile apps and these libraries make the work effort almost half.

Gson is a Java library that can be used to convert Java Objects into their JSON representation. Gson can work with arbitrary Java objects including pre-existing objects that you do not have source-code of.

Gson tries to map all fields in the Java object to the JSON file it creates and vice versa. Gson allows to exclude certain fields for serialization and deserialization.

Retrofit is a type-safe HTTP client for Android and Java. Retrofit makes it easy to retrieve and upload JSON (or other structured data) via a REST based web service..

Developing your own type-safe HTTP library to interface with a REST API can be a big problem.: you have to handle many functionalities such as making connections, caching, retrying failed requests, threading, response parsing, error handling, and more. Retrofit is very well planned, documented, and tested that will save you a lot of precious time and headaches.

The good thing about treating API calls as Java methods is that you only need to define the target URLs and parameters as Java classes, which makes the process clearer and simpler. It can handle asynchronous and synchronous requests with automatic JSON parsing. Retrofit performs better according to some benchmarks.

MBProgressHUD displays a translucent HUD with an indicator and/or labels while work is being done in a background thread. The HUD is meant as a replacement for the undocumented, private UIKit UIProgressHUD with some extra features.

MBProgressHUD works on any iOS version and is compatible with both ARC and non-ARC projects.

Hero is a great transition library for the ios. With the help of this library developer can keep the control over the ios view. It creates a specific layer on the top of the UIKits heavy transition APIs By which creating the custom transitions becomes an easy task to the developers. It checks the heroID property on all source and destination views and when property matched then the view pair is automatically transformed from old state to its new state.

Transitions can be easily controlled by the user gestures.

By default, Hero provides the dynamic duration based on the Material Design Motion Guide. Duration is automatically specified by changes to distance and size—saving you the hassle, while providing consistent and beautiful animations.

Lottie is a mobile library for Android and iOS that provides the animations and art in the realtime with minimal code. Here animations based on the vectors.

Lottie loads and supports animations and vectors exported in the bodymovin JSON format.

For the first time, designers can create and ship beautiful animations without a conscientious engineer recreating it by hand.

Animations can be played, resized, looped, sped up, slowed down, reversed, interactively scrubbed, even changed at runtime like color, position or any keyframable value.

CocoaPods is a dependency manager for Swift and Objective-C Cocoa projects. It has over 30 thousand libraries.

It simplifies the effort of adding,importing and handling the third party libraries and it handles the dependencies of third party as well in the application.

Must Read: Flutter Vs Ionic : Which is better for your App?

Conclusion Above are the libraries which make our developer’s work uncomplicated while implementing the application for iOS and android.

Anyone can use the above libraries in their android iOS application and acquaintance the effortless and effective outcomes.

We will add some more libraries to this list which reduce the pain of our developers in future and will do the same for you as well.