Quincy Interviews Open Source Legends The Changelog for their 10 Year 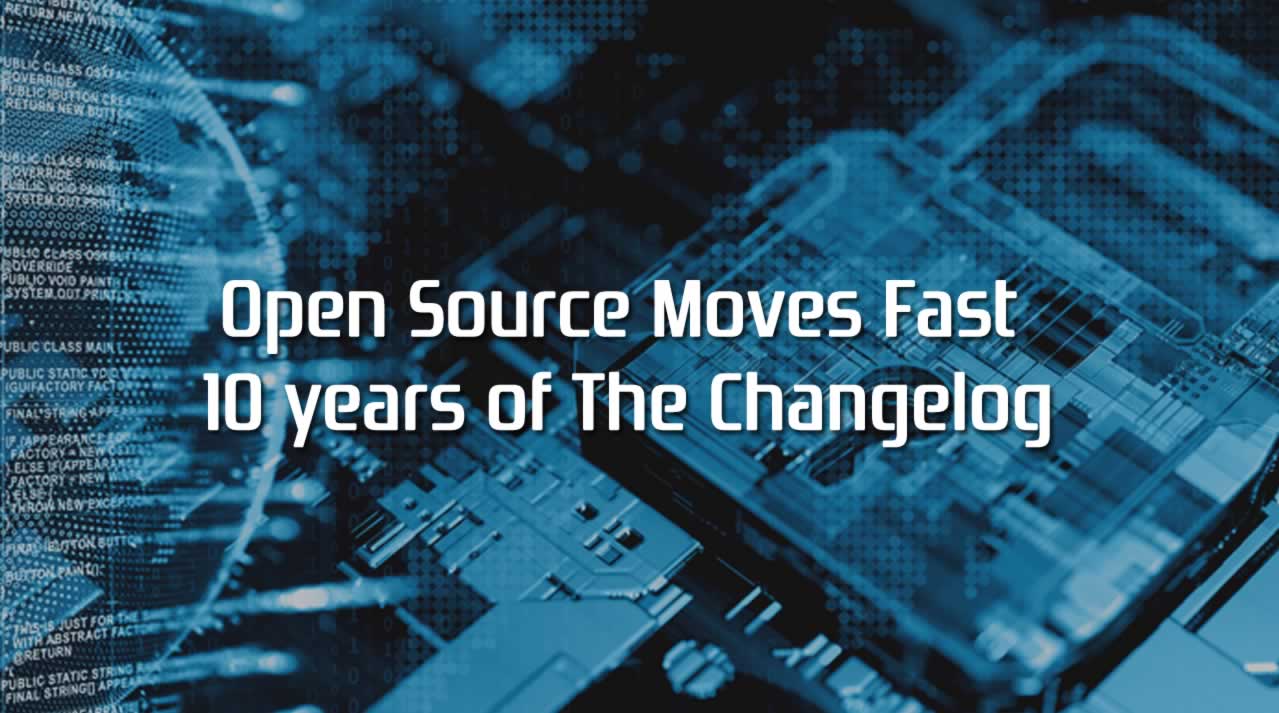 10 fateful years ago, Adam Stacoviak published the first-ever episode of The Changelog podcast. In the time since, he's interviewed hundreds of project maintainers. And The Changelog has risen to legendary status within the developer community.Quincy Interviews Open Source Legends The Changelog for their 10 Year

10 fateful years ago, Adam Stacoviak published the first-ever episode of The Changelog podcast. In the time since, he's interviewed hundreds of project maintainers. And The Changelog has risen to legendary status within the developer community.

I started listening to The Changelog back in 2011, when I first started learning to code. In between coding sessions, I would throw on my headphones and absorb as much of their back-catalogue as I could. This gave me a birds-eye view of the growing open source world.

I still listen to The Changelog to this day. And they have grown a lot. They now have lots of shows, including one focused on JavaScript, and one focused on Go.

The Changelog currently has 8 podcasts focused on different software-related topics. Each has its own symmetric logo.

As of writing this, The Changelog has published 370 episodes. People have listened to these podcast episodes more than 14 million times.

I was a guest on The Changelog back in 2016, when freeCodeCamp was still a fledgling project that I was funding out of my personal savings. I distinctly remember playing the interview for my parents. I was so proud to have "made it" and been on The Changelog.

Fast forward to early 2019. I talked with Adam about doing something special for their 10 year anniversary. I was living in China at the time, and assumed I would have to interview him over a video conference.

But as fate would have it, I moved my family to Dallas. Which just happened to be a 4-hour drive from Adam's studio in Houston.

So I said: You know what - let's just do this in person.

Adam's co-host for the past 7 years, Jerod Santo, booked a flight from his home town of Omaha, Nebraska. And we all met for 4 solid hours of interviews.

Before we get to the resulting interviews (and yes - you can hear them right here in this article, in either audio or video form), let me tell you a bit more about The Changelog.

Adam founded The Changelog with the catch phrase: "Open Source moves fast. Keep up." This was during the early days of the GitHub era.

In fact, Adam and his cohost, Wynn Netherland, interviewed former GitHub CEO Chris Wanstrath on episode 10, before GitHub became the break out success we all know today.

GitHub featured The Changelog in its "Explore" page, which lead to rapid growth in listenership.

Their relationship was so close that Wynn himself ultimately took a job at GitHub in 2012, and left The Changelog behind.

For a while Adam continued to run the podcast by himself. But Adam had a family and a full-time job. And The Changelog was in danger of becoming discontinued.

Luckily, The Changelog had one particularly devoted listener - an Omaha-based developer named Jerod Santo. Jerod noticed the episodes were getting more and more infrequent. So in 2013, he reached out to Adam and asked what he could do to help. And that sparked a Changelog renaissance.

Adam decided he needed to turn The Changelog from a part-time passion project into a profitable endeavor. He quit his job and focused all his effort on finding advertisers for The Changelog so he could make it sustainable.

They formed key partnerships with long-running sponsors who helped out with funding, servers, and bandwidth.

Soon The Changelog started launching additional shows. They built a lightning-fast website using emerging tools like the Elixir Phoenix framework. They open-sourced everything.

And there's a lot more to their story. During the interview, I ask them about:

Yes - I am a very thorough interviewer. 😉

And then, after I finished interviewing them, they turned around and interviewed me about the future of freeCodeCamp.

In total, this is a solid 4 hours of interviews about two big open source projects with interconnected communities and a shared goal of educating people.

I think you'll dig it.

You can watch both interviews - filmed in Adam's Houston studio - in the video embeded below.

If you want to use less of your data, you can listen to the interview in podcast form below, or in your favorite podcast app (just search "The freeCodeCamp Podcast").

If you have an Amazon Echo you can say "Alexa, play The freeCodeCamp Podcast."

Description
Students will be able to know various commands include: