Docker Interview Questions - Top 16 Questions You Must Know In 2019 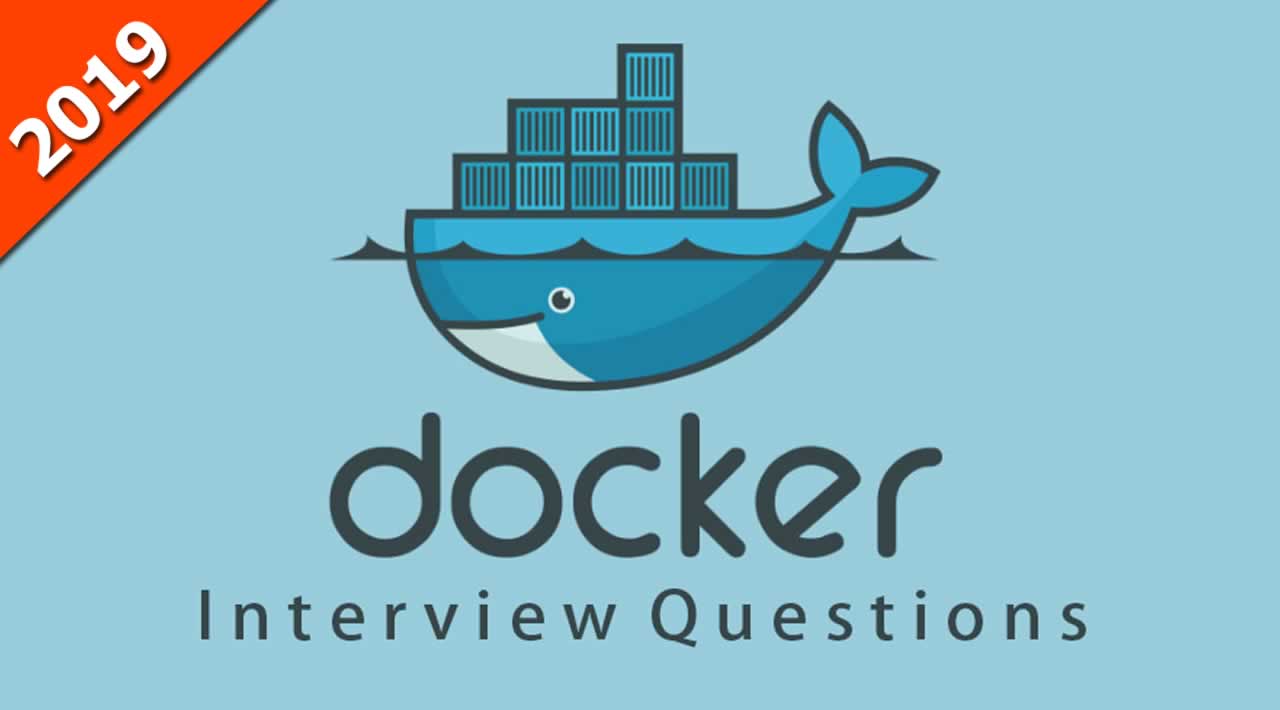 In this article, you'll see top 16 Docker interview questions from beginners to advanced that you must know in 2019

Docker containers can be considered as the new era of virtualization. Docker containers are replacing Virtual Machines, this is a well known fact now. So be prepared to answer few questions on Docker in your next interview. If you aspire to outshine yourself in your upcoming DevOps interview, going through these top Docker interview questions is a must. These questions are very carefully handpicked after discussing with many interviewers and DevOps Training experts.

The first question in this blog on Docker Interview Questions has to be:

Q1. What are the differences between Docker and Hypervisors? 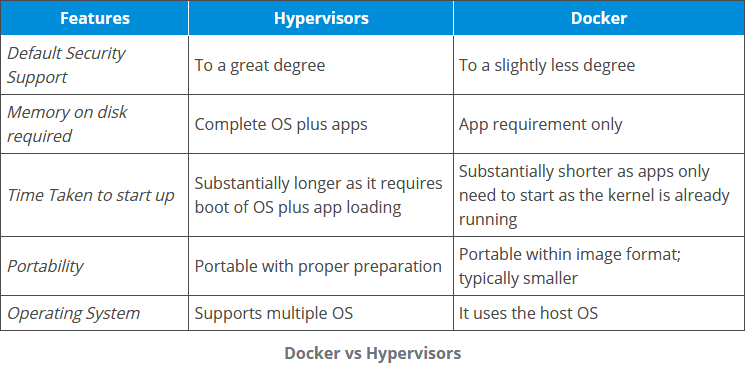 I will suggest you to start with a small definition of Docker. Docker is a containerization platform which packages your application and all its dependencies together in the form of containers so as to ensure that your application works seamlessly in any environment be it development or test or production.Docker containers, wrap a piece of software in a complete filesystem that contains everything needed to run: code, runtime, system tools, system libraries etc. anything that can be installed on a server.This guarantees that the software will always run the same, regardless of its environment. You can refer the diagram shown below, as you can see that containers run on a single machine share the same operating system kernel, they start instantly as only apps need to start as the kernel is already running and uses less RAM.

Note: Unlike Virtual Machines which has its own OS Docker containers uses the host OS 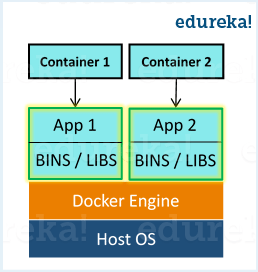 Next set of Docker interview questions will focus on various components of Docker.

Q3. What is Docker image?

I will suggest you to go with the below mentioned flow:

Docker image is the source of Docker container. In other words, Docker images are used to create containers. Images are created with the build command, and they’ll produce a container when started with run. Images are stored in a Docker registry such as registry.hub.docker.com because they can become quite large, images are designed to be composed of layers of other images, allowing a minimal amount of data to be sent when transferring images over the network.

Tip: Be aware of Dockerhub in order to answer questions on pre-available images.

Q4. What is Docker container?

This is a very important question so just make sure you don’t deviate from the topic and I will advise you to follow the below mentioned format:

Q5 What is Docker hub?

Answer to this question is pretty direct.

Docker hub is a cloud-based registry service which allows you to link to code repositories, build your images and test them, stores manually pushed images, and links to Docker cloud so you can deploy images to your hosts. It provides a centralized resource for container image discovery, distribution and change management, user and team collaboration, and workflow automation throughout the development pipeline.

Q6. How is Docker different from other container technologies?

According to me, below, points should be there in your answer:

Docker containers are easy to deploy in a cloud. It can get more applications running on the same hardware than other technologies, it makes it easy for developers to quickly create, ready-to-run containerized applications and it makes managing and deploying applications much easier. You can even share containers with your applications.

If you have some more points to add you can do that but make sure the above the above explanation is there in your answer.

Q7. What is Docker Swarm?

You should start this answer by explaining Docker Swarn.

Docker Swarm is native clustering for Docker. It turns a pool of Docker hosts into a single, virtual Docker host. Docker Swarm serves the standard Docker API, any tool that already communicates with a Docker daemon can use Swarm to transparently scale to multiple hosts.

I will also suggest you to include some supported tools: DokkuDocker ComposeDocker MachineJenkins## Q8. What is Dockerfile used for?

This answer, according to me should begin by explaining the use of Dockerfile.

Docker can build images automatically by reading the instructions from a Dockerfile.

Now I will suggest you to give a small definition of Dockerfle.

A Dockerfile is a text document that contains all the commands a user could call on the command line to assemble an image. Using docker build users can create an automated build that executes several command-line instructions in succession.

Now, the next set of Docker interview questions will test your experience with Docker.

Q9. Can I use json instead of yaml for my compose file in Docker?

You can use json instead of yaml for your compose file, to use json file with compose, specify the filename to use for eg:

Q10. Tell us how you have used Docker in your past position?

If you have no past practical experience in Docker and have past experience with other tools in a similar space, be honest and explain the same. In this case, it makes sense if you can compare other tools to Docker in terms of functionality.

Q11. How to create Docker container?

I will suggest you to give a direct answer to this.

We can use Docker image to create Docker container by using the below command:

This command will create and start a container.

You should also add, If you want to check the list of all running container with the status on a host use the below command:

Q12. How to stop and restart the Docker container?

In order to stop the Docker container you can use the below command:

Now to restart the Docker container you can use:

Large web deployments like Google and Twitter, and platform providers such as Heroku and dotCloud all run on container technology, at a scale of hundreds of thousands or even millions of containers running in parallel.

Q14. What platforms does Docker run on?

I will start this answer by saying Docker runs on only Linux and Cloud platforms and then I will mention the below vendors of Linux: Ubuntu 12.04, 13.04 et alFedora 19/20+RHEL 6.5+CentOS 6+GentooArchLinuxopenSUSE 12.3+CRUX 3.0+ Cloud: Amazon EC2Google Compute EngineMicrosoft AzureRackspace Note that Docker does not run on Windows or Mac.

Q15. Do I lose my data when the Docker container exits?

You can answer this by saying, no I won’t lose my data when Docker container exits, any data that your application writes to disk gets preserved in its container until you explicitly delete the container. The file system for the container persists even after the container halts.

Below are some commonly used Docker commands: 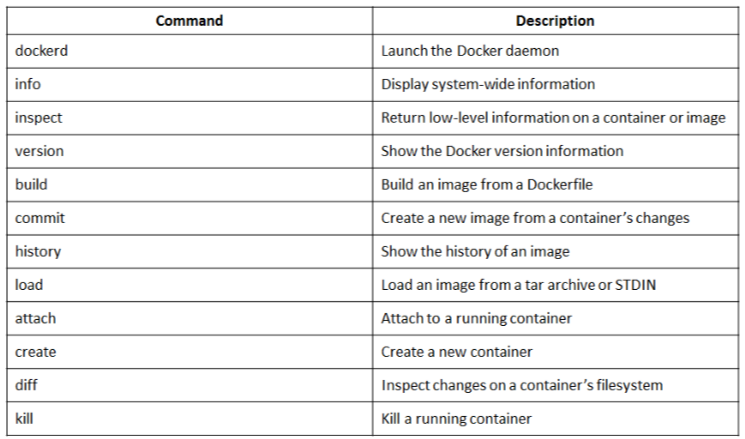 I have included the frequently asked Docker interview questions. If you have more questions in your mind just type it in the comment box below and we will reply you ASAP.

Docker Interview Questions And Answers, we have compiled the most important Docker interview questions that you might face in a Docker or DevOps interview. Docker is a popular DevOps tool used to automate the deployment of applications in lightweight containers so that applications can work efficiently in different environments. Docker was initially released in 2013 and since then has become the go-to solution for containerization.

Here we have compiled the most probable DevOps interview questions asked in the industry. You will learn about software version control, Git repository, reverting a commit in Git, Vagrant, continuous testing elements, and the importance of...