Discussion of reflections on Golang 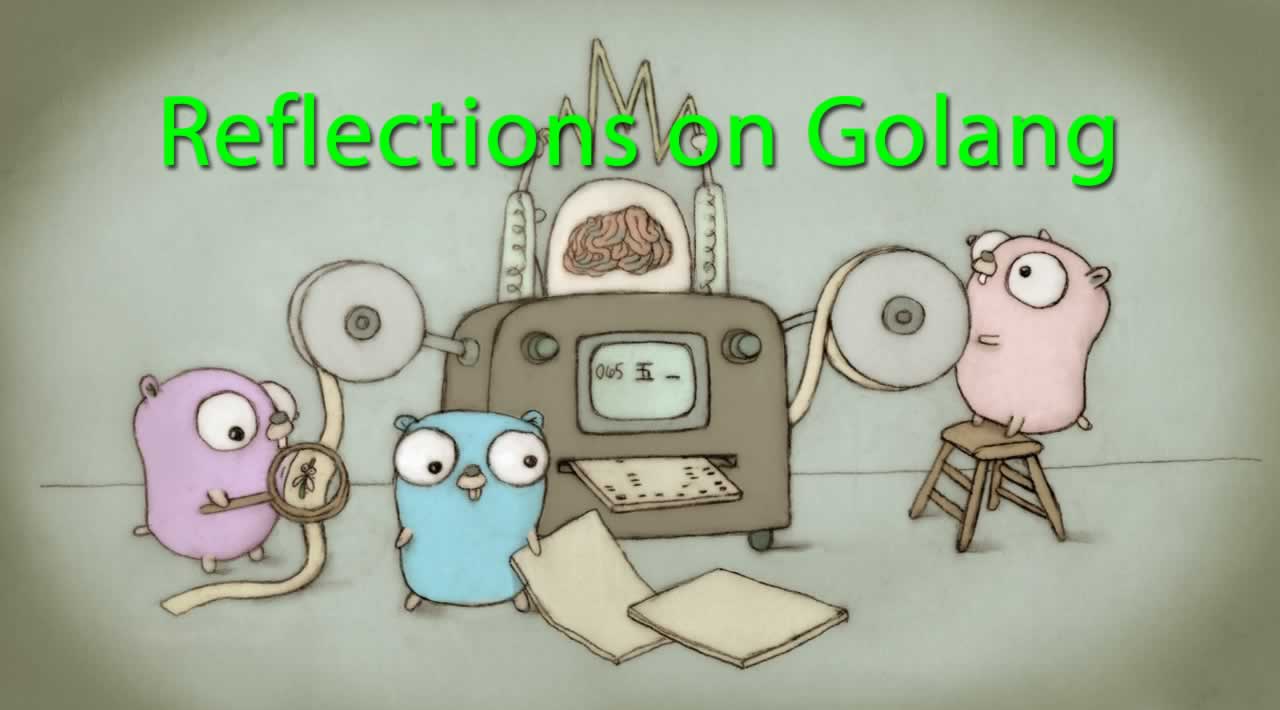 I like Go for what it is but like every other programming language, it is always a love-hate relationship. No programming language is perfect and all of them have their own merits and use cases. In this article, we discussion of reflections on Golang

I like Go for what it is but like every other programming language, it is always a love-hate relationship. No programming language is perfect and all of them have their own merits and use cases. In this article, we discussion of reflections on Golang

Do I like Go? Yes. Would I use it for every use case I have? Definitely not.

Go is the latest language I learned and worked with, I have worked on a CLI project built with Go for over 9 months now, building a powerful scaffolding engine with my team(Yes, pretty much like JHipster) that uses Go templates where you could create what we call blueprints at XebiaLabs. So yes I have done much more than a hello world app with Go.

Without wasting more time on unrelated things here is what I like about Go and what I don't like.

I like the fact that Go is a simple language(Going through the entire language features on the tour page literally takes 15 minutes unless you do the exercises) and unlike Scala, Rust or even JavaScript Go doesn't have many ways of doing the same thing which is extremely valuable for people working in teams and companies wanting to write maintainable code where even a newly joined employee can read and understand the code without needing much help. I think this is one of the biggest reason that is driving Go adoption. If you have worked on large scale projects you know how difficult it is when the code is unreadable and every new team member have to spend so much time trying to understand what a piece of code does. So I was really happy when I saw that Go doesn't have features that rely heavily on implicit and such. The language features and concepts are easy to grasp and you can start being productive in Go quite soon. The only concepts that might seem bit complex are the concurrency part and even that is simpler compared to other languages.

This is such a time saver. IMO every language should just do this so that you don't waste time debating code style and setting up lint rules. Go provides opinionated formatting, linting & vet tool as part of the package and the Go compiler even enforces things like unused variable and stuff. Most of the IDE/Editor plugins also use these tools for formatting and linting and hence helps to keep consistent code style across Go projects which again adds to readability and maintenance.

This is one of the biggest strength of Go. The native support for concurrency and parallelism. This makes Go an ideal candidate for applications that require heavy concurrent and/or parallel processing, networking and so on. Goroutines makes it so easy to start lightweight threads and channels provide a way to communicate between these threads acting like a message bus.

If you have used JavaScript you would know how useful closures and callbacks are. Go like JavaScript treats functions as objects and hence can be assigned to variables, stored in maps, passed as function parameters and returned from functions. It also supports creating nested closures and anonymous functions which helps to encapsulate context. The behavior is pretty much similar to JavaScript. So you can apply some functional programming concepts in Go as well.

Go provides a nice way of asserting types and can be used with a switch statement which makes it easier to do reflection and such.

This is quite a handy feature like in Python, we are used to deconstructing objects/arrays to achieve this in JavaScript and using Tuples and such in some languages. The returns can also be named which is nice for readability. 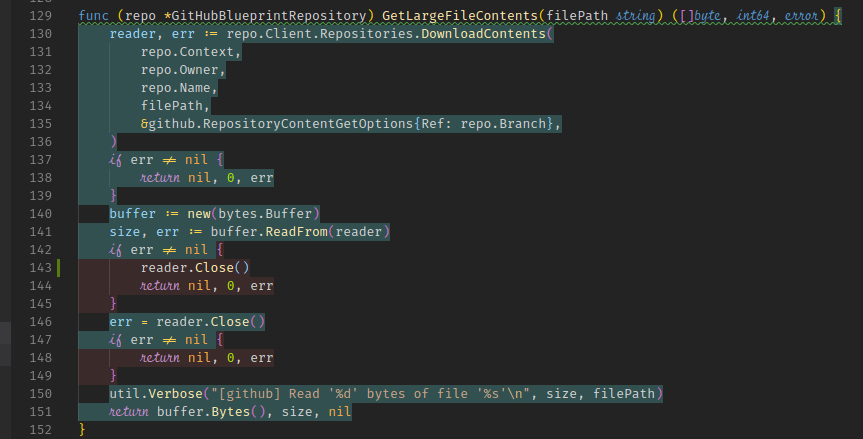 As mentioned earlier Go provides standard tooling for formatting, linting and so on and the language design makes it easy to build tooling for Go and hence editors/IDE has nice features like test generation, code coverage and so on. For example, the VSCode integration for Go provides the below options which helps with consistency and less boilerplate to write by hand. 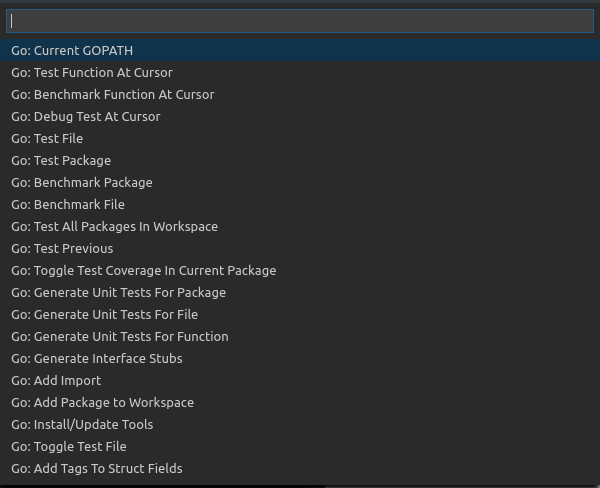 Go doesn't need a runtime like JVM or NodeJS, Go applications can be compiled into an executable cross-platform binary using the standard Go tooling. This makes Go applications portable and platform independent.

This is where the love-hate relationship starts, Go is a simple language which is nice but at times it feels too simple & verbose and coming from Java/JavaScript ecosystem you are spoiled with some nice features & syntax sugars which IMO makes the code more expressive and helps to keep it DRY. The things that I miss the most are

Go being too simple means you would have to write a lot of code as the language doesn't offer constructs like map, reduce, and so on, and add the lack of generic on top means you would end up writing a lot of utility code and a lot of that will be repeated to accommodate different types. Imagine writing a map function in Go, you would have to write one for every combination of Map that can be used. These factors don't make it easy to do DRY programming in Go.

The dependency management in the Go ecosystem feels immature and too basic compared to other mainstream languages. Importing packages from Git is nice but it also makes it more fragile. What can go wrong when you are depending on a Git branch on your production application right! There is no way to use relative dependencies(Can't beat NPM link!).

These problems are similar to the issues with dependency range in Node package managers. Glide seems to be a popular choice but still is not as mature as solutions in other languages. In the project, I work on we used Gradle along with Gogradle and though it works fine the developer experience is not as good as using Gradle/Maven for Java project or using NPM on a NodeJS project.

Go recommends you to create your Go projects under the GOPATH. Maybe it is just me, but I hate this as I would normally like to organize my code. For example, I have a ~/workspace/ folder where I organize my projects by the organization. If I follow the Go recommendation I have to put the project under /home/deepu/go/src along with all the library source code that is downloaded. If you don't follow this then most of the Go tooling just doesn't work. Currently, I have a specific Gradle task that copies over all vendor libs to my local Gopath inside ~/workspace/XL/<project> to workaround this.

Go has pretty good pointer support and the default behavior is to pass an object by value. If you want to pass something by reference you have to mark it specifically. But this behavior is not very consistent as the content of Maps and Slices by default are passed by reference and hence this could be a bit surprising to beginners.

This is more of a nitpick. Structs are what you would use to create data structures in Go. It might look like an object but they are not exactly objects. While structs are fine functionally, in many cases you will end up with structs that look like the ugly brother of JSON. In real-world projects, you always will end up creating complex structs, especially if the application is doing some generic json or yaml parsing and soon your code will start to look like this. This is not that big of a concern but it just hurts my eyes every time I debug something or write tests.

The interface concept in Go is weird. These are the only implicit construct in Go. If you come from other languages that have interfaces then this will feel weird. The fact that they are implicit means its really easy to mess things up. Refactoring is messy unless you have a smart IDE, and you can accidentally implement someone's interface by just naming your method a certain way. While implicit interfaces certainly help with polymorphism and decoupling code I personally would still prefer interfaces that are explicit.

Another interface Gotcha is nil value checks, in Go, an interface is made up of two parts a type and a value, so an interface is nil only when both type and value are nil, this means you can't just simply do nil checks on interfaces. This is so confusing the Go has a specific FAQ for this. Below article explains this in more detail

Go implements a concurrent tri-color mark-sweep collector as its garbage collector. This specific GC implementation is optimized for better pause times while ignoring program throughput, pause frequency and many other parameters that are considered during GC. Some people in the Go community claims this as the best ever GC. Having some Java background I would have to disagree as most JVM implementations provide multiple GC algorithms you can choose from which includes a concurrent mark-sweep collector as well and most of these are balanced to take care of many more parameters than just pause times. This articles analyses this in detail. So some use cases that produce a high amount of garbage might actually be slower in Go compared to another language due to frequent GC.

This is purely based on personal experience and hence will vary from others. Being a polyglot developer who has worked with many languages, the developer experience from Go is not the best I have experienced. The DX of the JavaScript ecosystem is the best I have experienced so far. It feels like there are things missing in the Go ecosystem. Dependency management and toolchains need improvement. A bit more sensible language features and some syntax sugar wouldn't hurt as well.

So where would I use Go?

I do hope Go evolves into a general purpose language over time and many of these concerns are solved.

From where should I hire offshore OpenCart developers?