The Complete Guide to Javascript Variables

What is a variable?

A variable is a named location for storing a value. That way an unpredictable value can be accessed through a predetermined name. — MDN

Think of it as a placeholder.

When you say to yourself, “I need to remember all this information later, but I only want to remember one word”…that’s a variable!

JS is a dynamically typed language, so we generally don’t have to worry about assigning the type of data that is being stored in that variable. However, knowing the types makes debugging a lot easier.

Variables don’t have types, but the values in them do. These types define intrinsic behavior of the values. — Kyle Simpson

Note: All of these types except object are called “primitives”.

In JavaScript, a primitive (primitive value, primitive data type) is data that is not an object and has no methods. — MDN

Represents the intentional absence of any object value — MDN

null is something you (the human) use to purposefully say, this variable has no value.

Consistent way of returning from a function that doesn’t yield results:

If we didn’t tell it to return null, it would return undefined.

Defines a variable that does not have a value. In other words, the JS Engine is aware that a variable exists, but it has no value. This may seem similar to null but they are different. The main difference is that null is a defined value, whereas undefined is not. For a great article about this specific topic, check this out.

The number in JS differs from other programming languages that define what type of number, e.g. float, integer, etc. Instead, JS uses the double-precision 64-bit floating point format (IEEE 754). That means you don’t have to worry about the type of number when declaring it. Just declare away!

A value you expect to do something computational with, e.g. math.

A sequence of characters. For example, this sentence.

Storing information to display to the user.

An object initializer is a comma-delimited list of zero or more pairs of property names and associated values of an object, enclosed in curly braces ({}). — MDN

Everything. Which, is only partially a joke. I use JS objects to pass data around in an application.

A note about the Array

Technically speaking, an Array is an object. If you don’t believe me run this in the console:

However, as Kyle Simpson notes:

It’s most appropriate to think of them (arrays) also as a “subtype” of object (see Chapter 3), in this case with the additional characteristics of being numerically indexed (as opposed to just being string-keyed like plain objects) and maintaining an automatically updated .length property.

Unique Identifiers. No two symbols will ever be the same. Useful as object keys, in large data structures.

Gotta be honest, I haven’t used this in the real world, so maybe someone has a good example to share! However, I found a really good overview of symbols here.

Undeclared means that the variable you are trying to access is not available in the scope, which we’ll talk about in length in a minute. The error you will see is ReferenceError: x is not defined .

There are three different ways to declare a variable in Javascript. We’re going to talk about all three: var , let and const .

var vs const vs let

It’s been a minute since const and let were standardized into the JS Spec (2295360 as of the minute I’m writing this).

Old school way of defining a variable in JS. It was king of the block for a long time, until it’s much more specific brothers came long.

when to use let vs const

There are two camps about how to approach when to use what.

This method says, use const first for every variable. If the need comes along that you need to change a variable after it’s been declared, change it to let.

This method says, use let for everything. If the need comes along that you need to make sure a variable can’t be changed, change it to const.

Moral of the story here:

What if I told you that you could change the past.

If we do this, you’d expect it to throw an error:

But it doesn’t! JS “coerces” threeString into a number so it can do math. Thanks JS…I think? In this scenario, it’s probably fine. However, you can run into issues if you are trying to evalute an expressions “truthy-ness”. Check out this article for an even DEEPER dive.

Scope in Javascript refers to:

The current context of execution. — MDN

This means different things depending on whether we are talking about the old school var or the new school const / let . Scope comes in two flavors: local and global.

Global scope is anything at the top level of the file.

The definition of local scope changes slightly, depending on whether you are talking about var or let/const.

A var statement when called within a function, is available anywhere in that function. For example:

As long as it’s within that function, it’s available to be called.

The new kids on the block let and const are BLOCK scoped, which means they are only available within the block they are in.

Examples of blocks are: if/switch statements, for/while loops. Or, as described expertly in this article:

Generally speaking, whenever you see {curly brackets}, it is a block.

Per the MDN docs:

all declarations, both variables and functions, are processed first, before any part of your code is executed. — Kyle Simpson

When a var statement is hoisted to the top of the context, it is assigned a value of undefined .

What better way to understand it than using Tyler McGinnis’ amazing Javascript Visualizer! As you can see, both variables are given a value of undefined as soon the Creation phase starts. This allows the compiler to assign the value of “I’ve been Hoisted” to the value when it parses through the code during execution.

let and const are not hoisted in the same way that var is. var is initialized as undefined when they are hoisted. let and const remain uninitialized until the statement is evaluated by the compiler. Thanks, Bergi, for the insight.

When you declare variables, there’s a bunch of different options. The style is up to you, but just keep it consistent.

This is used for common variables throughout my applications.

I use Pascal casing for Classes or Components.

This method is pretty common in PhP, for whatever reason, but I haven’t seen it much in JS land. I don’t really like it anyways, so I don’t use it anymore.

According to StackOverflow, this convention is known colloquially as kebab-case. While this method can’t be used by JS, it is a common convention in HTML. I try to avoid it for reasons mentioned below.

I typically use camel casing, for everything (CSS, JS, HTML). For one, it seems to be pretty standard about the JS world, but also because it makes writing out selectors a little cleaner/consistent.

Consider the example below:

I think this makes for cleaner code, but I’ll leave that up to you to debate.

What do I call this variable?

Now that you know where you’re going to be able to access it, and whether you can change it or not, it’s time to name it! If you’re like me, it takes a good five minutes to settle on a variable name. Over the years, I’ve come across some helpful tips to avoid that wasted time. The most important one:

Name it what it is.

Wow, what great advice.
I know it sounds simple, but just think about what exact information is going to be held in this variable and what you’re going to do with it. Try to avoid using single character variables like i, e or p. Use whole words. If your text editor is any good, it’ll autocomplete those for you anyways.

Just a note, there are a bunch of reserved words in JS. For instance: abstract, var and boolean. You can check them all out here.

Wow, we made it to the end. Congratulations! Honestly, there is a lot of information here. We talked all about types, hoisting, coercion, and threw in some ES6 for flavor. There’s no way we covered it all.

Did I miss anything? What other topics should we explore together? 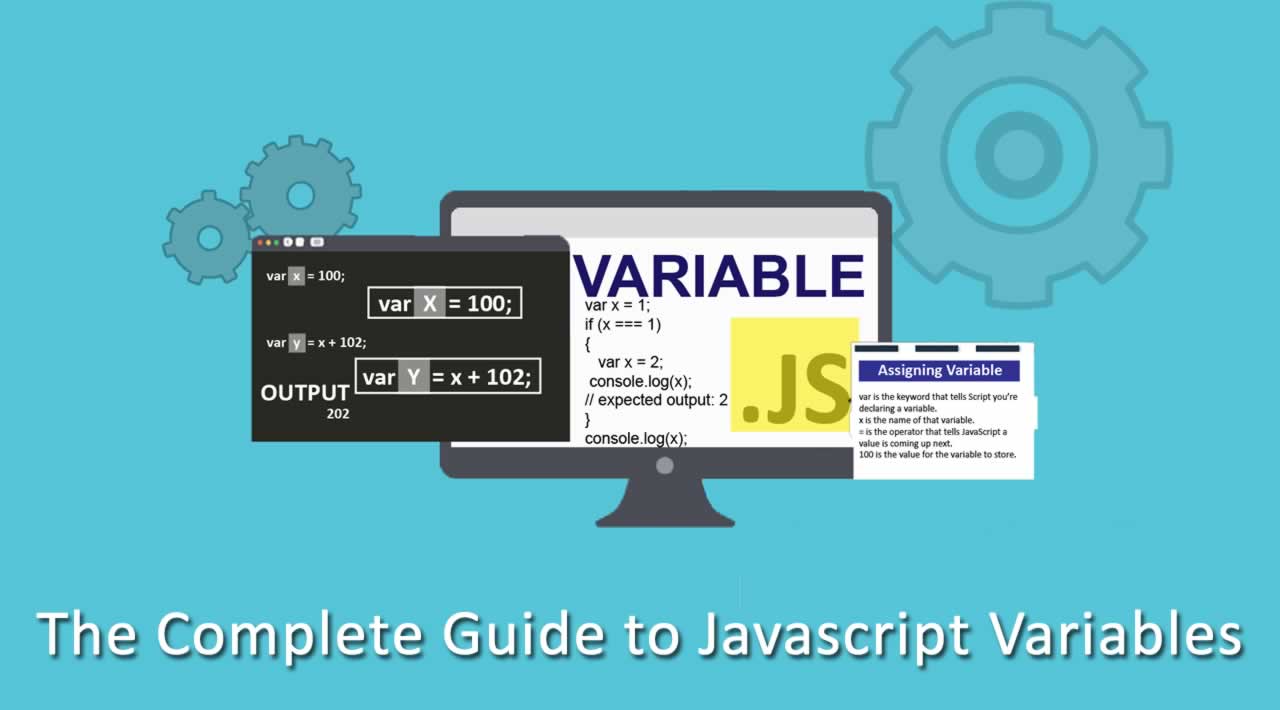