JavaScript ranks among the top programming languages worldwide, and as per the 2019 Stack Overflow Report, it gets used by 67.8% of developers.

It mustn't be a surprise if you are a tech enthusiast. However, if you aren't, the stunning fact you just read is bound to boost your confidence over JS.

Although intended for front-end development, the high-level programming language has now encroached and successfully captured server-side programming too.

Significant credit for this is given to Node.js, which is a runtime environment provider.

Coming to the Main Topic: You may find it interesting to learn that the American digital payment provider PayPal successfully decreased average response time by 35% by deploying Node.js on its page.

Before you proceed to learn the advantages and not so desirable disadvantages of Node.js web app development-

Have a look at some more interesting Node.js stats as follows:

Well, you will find many more insightful stats as you read further.

So, do you know what Node.js is?

Well, Node.js is an open-source (means zero charges for accessing and using it), cross-platform (it supports Linux, macOS, Windows, etc.), JS runtime environment. It is based on Chrome's V8 JavaScript engine.

By runtime environment, it means that Node.js offers all the tools required for executing the program software.

Got released 11 years ago, its development gets credited to Microsoft Corporation, Ryan Dahl, OpenJS Foundation, and Bryan Cantrill.

That was a concise definition of Node.js. Let us now focus upon its benefits. 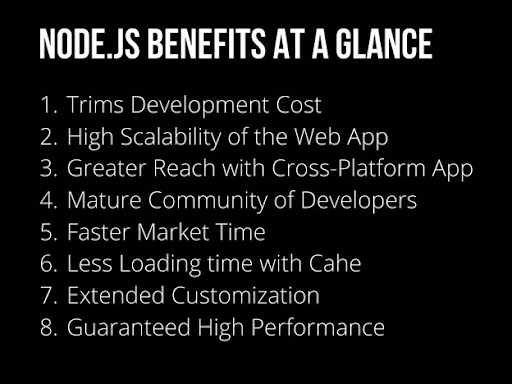 The very definition that states that Node.js is open-source indicates that it's an affordable option to go for. Well, that's not all; Node.js also proves cost-effective as you only need to hire JavaScript developers.

Hiring a single team for both the front-end and backend of the web app proves more reasonable than hiring a panel of diverse tech experts.

Case Study: PayPal switched from Java to JS & Node.js- It helped the American digital payment company develop a unified team that proved both cost-effective and helped the firm offer advanced solutions to clients.

Developing a web app that caters to your business today and doesn't become obsolete with the growing number of consumers depends on scalability. Fortunately, Node.js supports both horizontal and vertical scaling.

With the availability of both types of scaling, you can trust Node.js for a growing business.

Case Study: Uber, the taxi booking app, intensively relies upon Node.js along with the latest technology to tackle the ever-growing number of riders.

Node.js is itself compatible with Linux, macOS, Windows, etc. Furthermore, it can be combined with other frameworks like React, Vue, Angular, etc., to develop cross-platform apps.

Some of the popular technology stacks like MEAN, MERN, MEVN, etc. relies on the combination of Node.js with Express.js to develop high-performing web apps.

Case Study: Mozilla Firefox & Uber are some popular cross-platform apps that use Node.js in their technology stack.

Availability of a mature community of developers 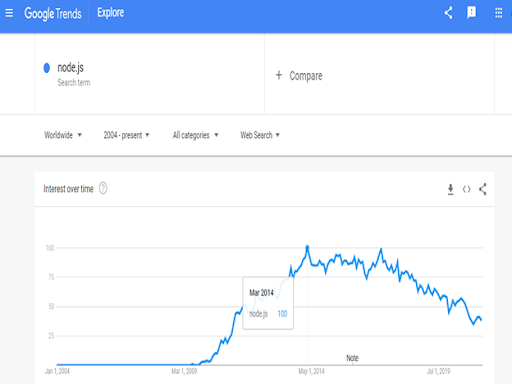 Node.js was introduced in 2009 and gained momentum within a few years of Introduction. The runtime environment saw a significant spike in the user's interest with five years, as per Google Trends.

You can easily hire Node.js developers from reputable resources, as multiple companies and freelance developers have gained experience in it.

Ensures faster time to market of the web-app

Node.js is compatible with tons of libraries and frameworks. It allows the developer's team to use ready-made and avoid coding from scratch, which facilitates rapid development of the web app.

As both the front-end coding and backend get done in a single language, it saves time otherwise necessary to ensure the two ends' code compatibility.

All of it together makes Node.js ideal for developing a web app in comparatively fewer man-hours.

Once a user visits the web app, the loading data gets saved on the user's device's cache memory. This allows fast data retrieval and effectively reduces the loading time of web app over the device.

Although the effect is only a few microseconds, it plays a pivotal role in enhancing the overall UX of the web app.

With speed being a prime concern for Generation X and Generation Y, caching memory action of Node.js boosts the performance of the app.

When trying new industry verticals, you need not say goodbye to your old web app as Node.js supports extended customization. The developer's team can rely on the** application program interface** for developing new comprehensive servers over the web app.

It makes a significant level of customization feasible for the existing web app.

Having Node.js ensures the optimum level of performance of the web app in the following ways:

Node.js has multiple poor-quality libraries that lack documentation. Using them over the app can lead to poor coding standards and may affect the app's performance.

Clearly, the pros of Node.js development outweigh the cons. With an experienced node.js development company in India, you can surely avoid the downside of investing in this runtime environment. Original source

PHP vs. Node.JS : Which Is Better For Backend Development?