The Updated Guide to Unicode, UTF-8 and Strings on Python 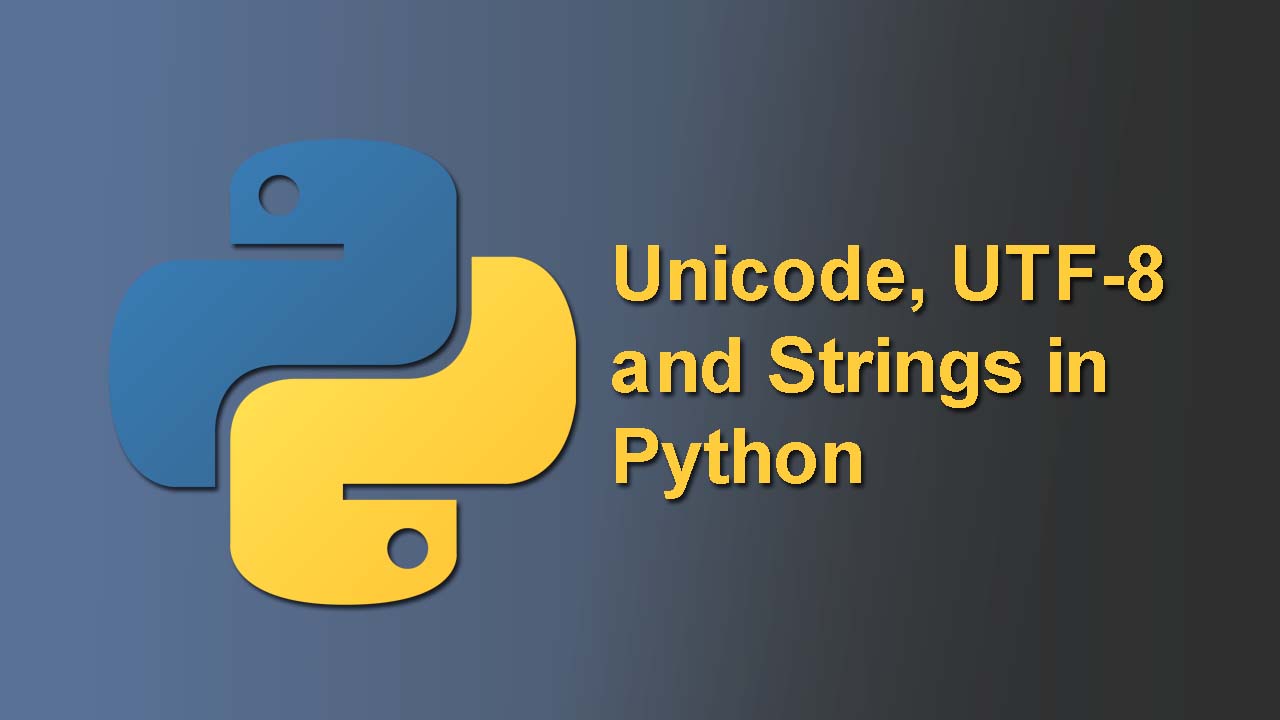 A Guide to Unicode, UTF-8 and Strings in Python. In Python (2 or 3), strings can either be represented in bytes or unicode code points. Unicode is international standard where a mapping of individual characters and a unique number is maintained. UTF-8:

Strings are one of the most common data types in Python. They are used to deal with text data of any kind. The field of Natural Language Processing is built on top of text and string processing of some kind. It is important to know about how strings work in Python. Strings are usually easy to deal with when they are made up of English ASCII characters, but “problems” appear when we enter into non-ASCII characters — which are becoming increasingly common in the world today esp. with advent of emojis etc.

For the longest time, I had the confusion about dealing with them, and like many programmers, threw encode and decode at strings in hopes of removing the dreaded UnicodeDecodeError — hopefully, this blog will help you overcome the dread about dealing with strings. Below I am going to take a Q and A format to really get to the answers to the questions you might have, and which I also had before I started learning about strings.

1. What are strings made of?

In Python (2 or 3), strings can either be represented in bytes or unicode code points.
Byte is a unit of information that is built of 8 bits — bytes are used to store all files in a hard disk. So all of the CSVs and JSON files on your computer are built of bytes. We can all agree that we need bytes, but then what about unicode code points? We will get to them in the next question.

2. What is Unicode, and unicode code points?

While reading bytes from a file, a reader needs to know what those bytes mean. So if you write a JSON file and send it over to your friend, your friend would need to know how to deal with the bytes in your JSON file. For the first 20 years or so of computing, upper and lower case English characters, some punctuations and digits were enough. These were all encoded into a 127 symbol list called ASCII. 7 bits of information or 1 byte is enough to encode every English character. You could tell your friend to decode your JSON file in ASCII encoding, and voila — she would be able to read what you sent her.

This was cool for the initial few decades or so, but slowly we realized that there are way more number of characters than just English characters. We tried extending 127 characters to 256 characters (via Latin-1 or ISO-8859–1) to fully utilize the 8 bit space — but that was not enough. We needed an international standard that we all agreed on to deal with hundreds and thousands of non-English characters.

3 of the most popular encoding standards defined by Unicode are UTF-8, UTF-16 and UTF-32.

We now know that Unicode is an international standard that encodes every known character to a unique number. Then the next question is how do we move these unique numbers around the internet? You already know the answer! Using bytes of information.

UTF-8: It uses 1, 2, 3 or 4 bytes to encode every code point. It is backwards compatible with ASCII. All English characters just need 1 byte — which is quite efficient. We only need more bytes if we are sending non-English characters.
It is the most popular form of encoding, and is by default the encoding in Python 3. In Python 2, the default encoding is ASCII (unfortunately).

UTF-16 is variable 2 or 4 bytes. This encoding is great for Asian text as most of it can be encoded in 2 bytes each. It’s bad for English as all English characters also need 2 bytes here.

UTF-32 is fixed 4 bytes. All characters are encoded in 4 bytes so it needs a lot of memory. It is not used very often.
[You can read more in this StackOverflow post.]

Why are encode and decode methods needed?

As we discussed earlier, in Python, strings can either be represented in bytes or unicode code points.
The main takeaways in Python are:
1. Python 2 uses **str** type to store bytes and **unicode** type to store unicode code points. All strings by default are str type — which is bytes~ And Default encoding is ASCII. So if an incoming file is Cyrillic characters, Python 2 might fail because ASCII will not be able to handle those Cyrillic Characters. In this case, we need to remember to use decode("utf-8") during reading of files. This is inconvenient.
2. Python 3 came and fixed this. Strings are still**str** type by default but they now mean unicode code points instead — we carry what we see. If we want to store these str type strings in files we use **bytes** type instead. Default encoding is UTF-8 instead of ASCII. Perfect!

5. Any code examples to compare the different data types?

Yes, let’s look at “你好” which is Chinese for hello. It takes 6 bytes to store this string made of 2 unicode code points. Let’s take the example of popularlen function to see how things might differ in Python 2 and 3 — and things you need to keep note of.

So, prefixing a u in Python 2 can make a complete difference to your code functioning correctly or not — which can be confusing! Python 3 fixed this by using unicode code points by default — so len will work as you would expect giving length of 2 in the example above.

Let’s look at more examples in Python 3 for dealing with strings:

6. It’s a lot of information! Can you summarize?

Sure! Let’s see all we have covered so far visually.
By default in Python 3, we are on the left side in the world of Unicode code points for strings. We only need to go back and forth with bytes while writing or reading the data. Default encoding during this conversion is UTF-8, but other encodings can also be used. We need to know what encoder was used during the decoding process, otherwise we might get errors or get gibberish!

Visual diagram of how encoding and decoding works for strings

This diagram holds true for both Python 2 and Python 3! We might be gettingUnicodeDecodeErrors due to:

A good practice is to decode your bytes in UTF-8 (or an encoder that was used to create those bytes) as soon as they are loaded from a file. Run your processing on unicode code points through your Python code, and then write back into bytes into a file using UTF-8 encoder in the end. This is called Unicode Sandwich. Read/watch the excellent talk by Ned Batchelder (@nedbat) about this.

If you want to add more information about strings in Python, please mention in the comments below as it will help others. This concludes my blog on the guide to Unicode, UTF-8 and strings. Good luck in your own explorations with text!