The Best Programming Languages for Mobile App Development in 2020

Mobile apps are growing and so is the demand for mobile app developers. There are billions of app downloads every year. The following chart shows the number of worldwide app downloads from 2012 to 2017. 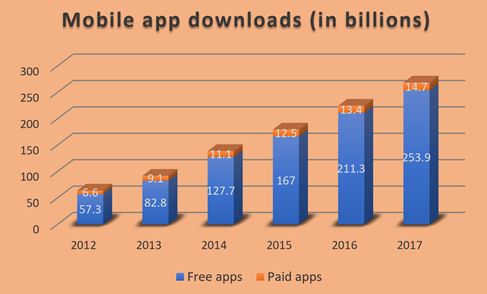 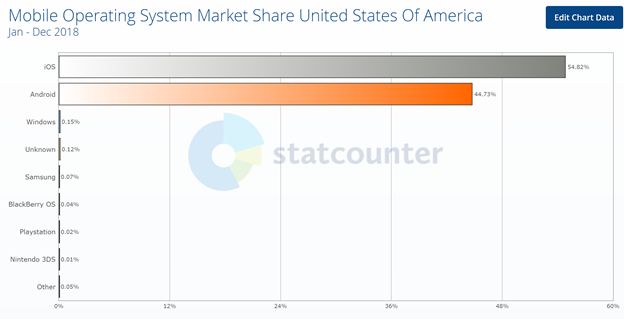 There are dozens of programming languages to build mobiles apps for both of these platforms. I’m not even going to mention other operating systems.

The following is a list of the top 10 mobile app development programming languages.

In this article, I will discuss the top 5 programming languages only.

Kotlin is a modern, concise, safe, object-oriented, and cross-platform programming language that was created by a software product company, JetBrains, in 2011. Kotlin is used to build JVM, Android, Browser, and Native apps. Currently, Kotlin is supported by Google under the Kotlin Foundation.

Since the release of Android Studio 3.0 in Oct 2017, Kotlin has been announced as the official programming language of Android.

For your next Android mobile app, I highly recommend using Kotlin.

To learn Kotlin, here is a complete training course on Kotlin.

Prior to Swift, Objective-C was the primary language for iOS development. Objective C being 30 years old, the language did not support modern needs. Swift is a modern programming language that provides modern language features such as dynamic, safe, late binding, and extensibility.

Earlier in 2018, Swift surpassed Objective-C in popularity and became the #1 programming language for iOS and other Apple operating systems. Swift is the most highly recommend language for building your new iOS, tvOS, and watchOS platforms.

To learn Swift, here is a complete training course on Swift.

Unlike Swift, Kotlin, and C#, Java may not be a modern programming language and does not upgrade frequently. Java however, offers a starting point for new developers. Java is much easier to learn compared to Kotlin. If you’re a new developer who wants to learn Android development, Java may be one of the easiest ways to begin.

Today, Swift has taken over Objective-C in popularity and usefulness.

Objective-C is a superset of the C programming language and provides object-oriented capabilities and a dynamic runtime. Objective-C inherits the syntax, primitive types, and flow control statements of C and adds syntax for defining classes and methods. It also adds language-level support for object graph management and object literals while providing dynamic typing and binding, deferring many responsibilities until runtime.

Besides Kotlin, Java, Objective-C, Swift, and C#, there are other language that provides an alternate for mobile app development. HTML 5, JavaScript, and CSS is one of the most popular ways to build hybrid (non native) mobile apps. Hybrid apps use a browser control to render HTML and CSS inside a shell of a mobile app. There are several tools to build hybrid apps.

There are several other options are out there including React Native and NativeScript. React Native.

Native Script is another framework that is used to build iOS and Android apps. 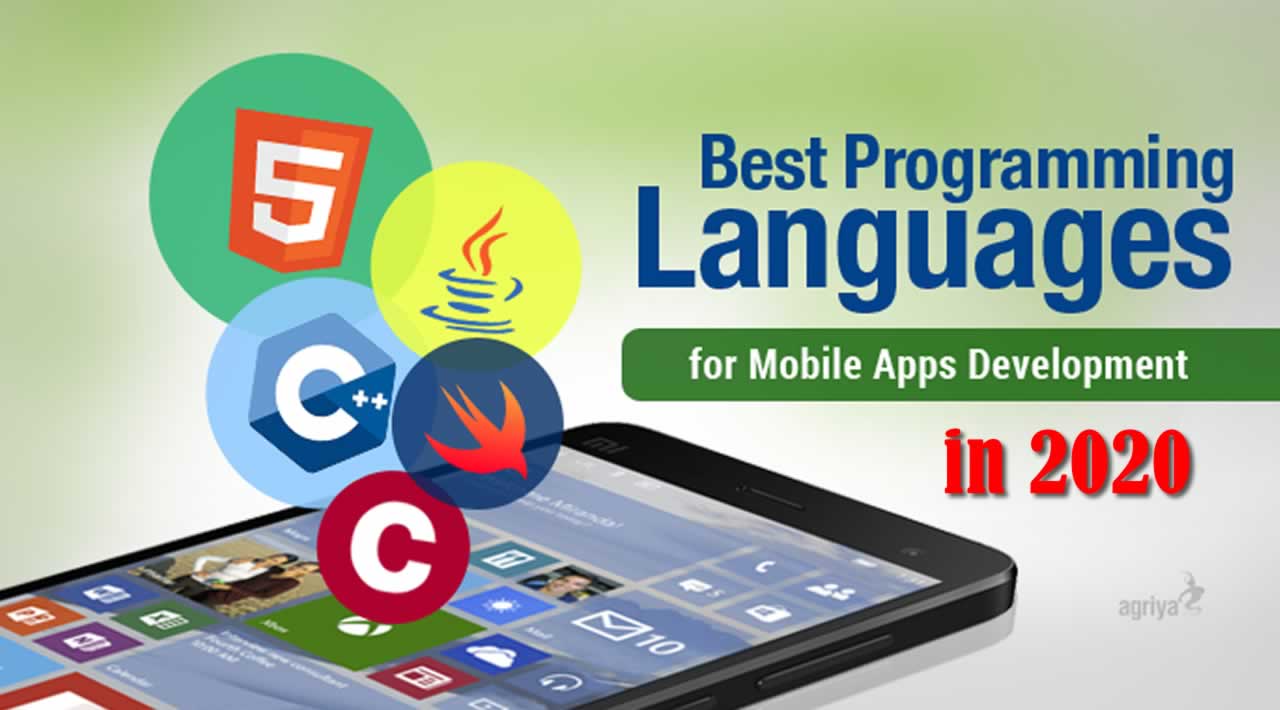 The electric scooter revolution has caught on super-fast taking many cities across the globe by storm. eScooters, a renovated version of old-school scooters now turned into electric vehicles are an environmentally friendly solution to current on-demand commute problems. They work on engines, like cars, enabling short traveling distances without hassle. The result is that these groundbreaking electric machines can now provide faster transport for less — cheaper than Uber and faster than Metro.

Since they are durable, fast, easy to operate and maintain, and are more convenient to park compared to four-wheelers, the eScooters trend has and continues to spike interest as a promising growth area. Several companies and universities are increasingly setting up shop to provide eScooter services realizing a would-be profitable business model and a ready customer base that is university students or residents in need of faster and cheap travel going about their business in school, town, and other surrounding areas.

In many countries including the U.S., Canada, Mexico, U.K., Germany, France, China, Japan, India, Brazil and Mexico and more, a growing number of eScooter users both locals and tourists can now be seen effortlessly passing lines of drivers stuck in the endless and unmoving traffic.

A recent report by McKinsey revealed that the E-Scooter industry will be worth― $200 billion to $300 billion in the United States, $100 billion to $150 billion in Europe, and $30 billion to $50 billion in China in 2030. The e-Scooter revenue model will also spike and is projected to rise by more than 20% amounting to approximately $5 billion.

And, with a necessity to move people away from high carbon prints, traffic and congestion issues brought about by car-centric transport systems in cities, more and more city planners are developing more bike/scooter lanes and adopting zero-emission plans. This is the force behind the booming electric scooter market and the numbers will only go higher and higher.

Companies that have taken advantage of the growing eScooter trend develop an appthat allows them to provide efficient eScooter services. Such an app enables them to be able to locate bike pick-up and drop points through fully integrated google maps.

It’s clear that e scooters will increasingly become more common and the e-scooter business model will continue to grab the attention of manufacturers, investors, entrepreneurs. All this should go ahead with a quest to know what are some of the best electric bikes in the market especially for anyone who would want to get started in the electric bikes/scooters rental business.

We have done a comprehensive list of the best electric bikes! Each bike has been reviewed in depth and includes a full list of specs and a photo. 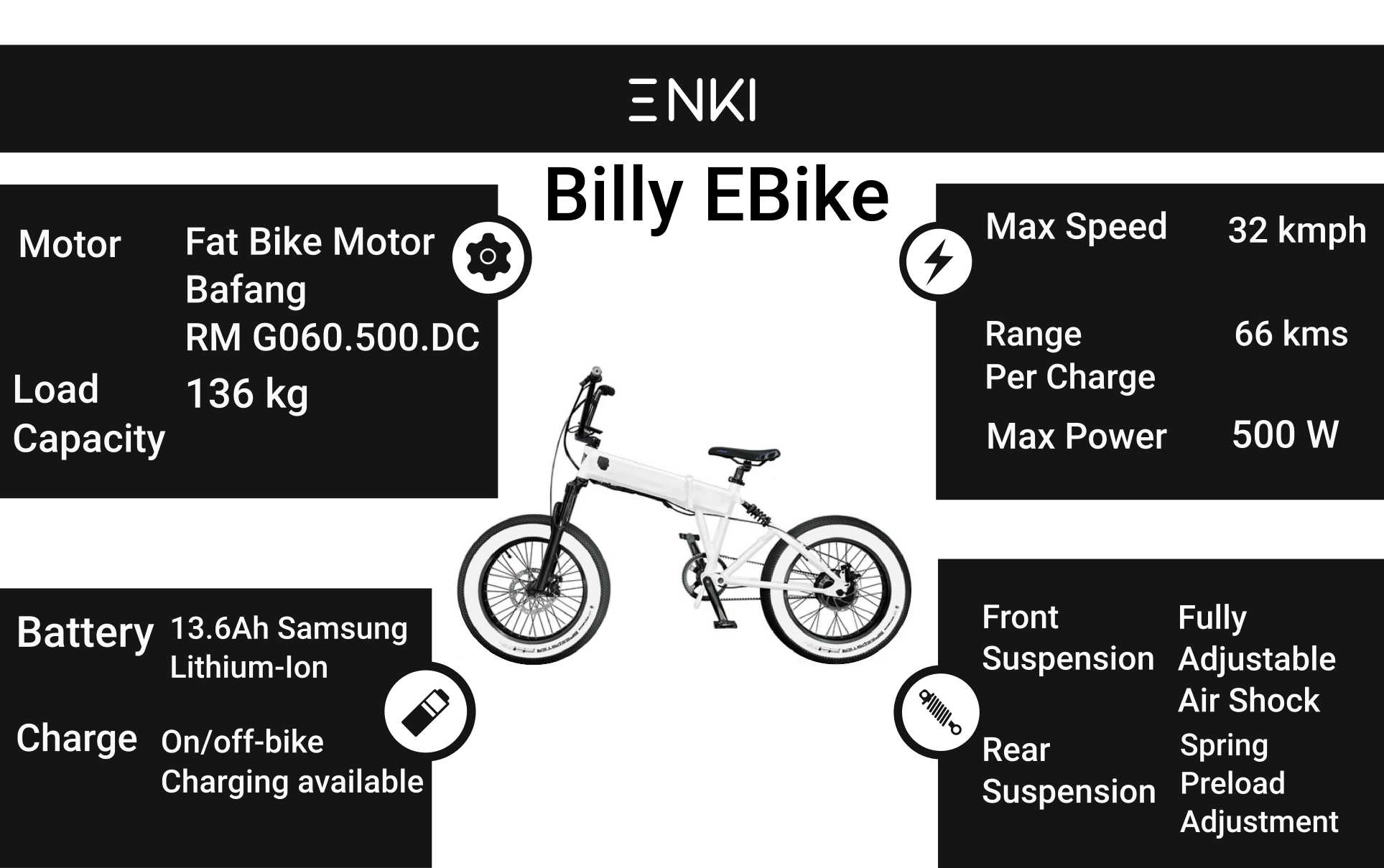 To start us off is the Billy eBike, a powerful go-anywhere urban electric bike that’s specially designed to offer an exciting ride like no other whether you want to ride to the grocery store, cafe, work or school. The Billy eBike comes in 4 color options – Billy Blue, Polished aluminium, Artic white, and Stealth black.

Available in the USA, Europe, Asia, South Africa and Australia.This item ships from the USA. Buyers are therefore responsible for any taxes and/or customs duties incurred once it arrives in your country.

Why Should You Buy This?

Both new and experienced riders

**Where to Buy? **Local distributors or ships from the USA. 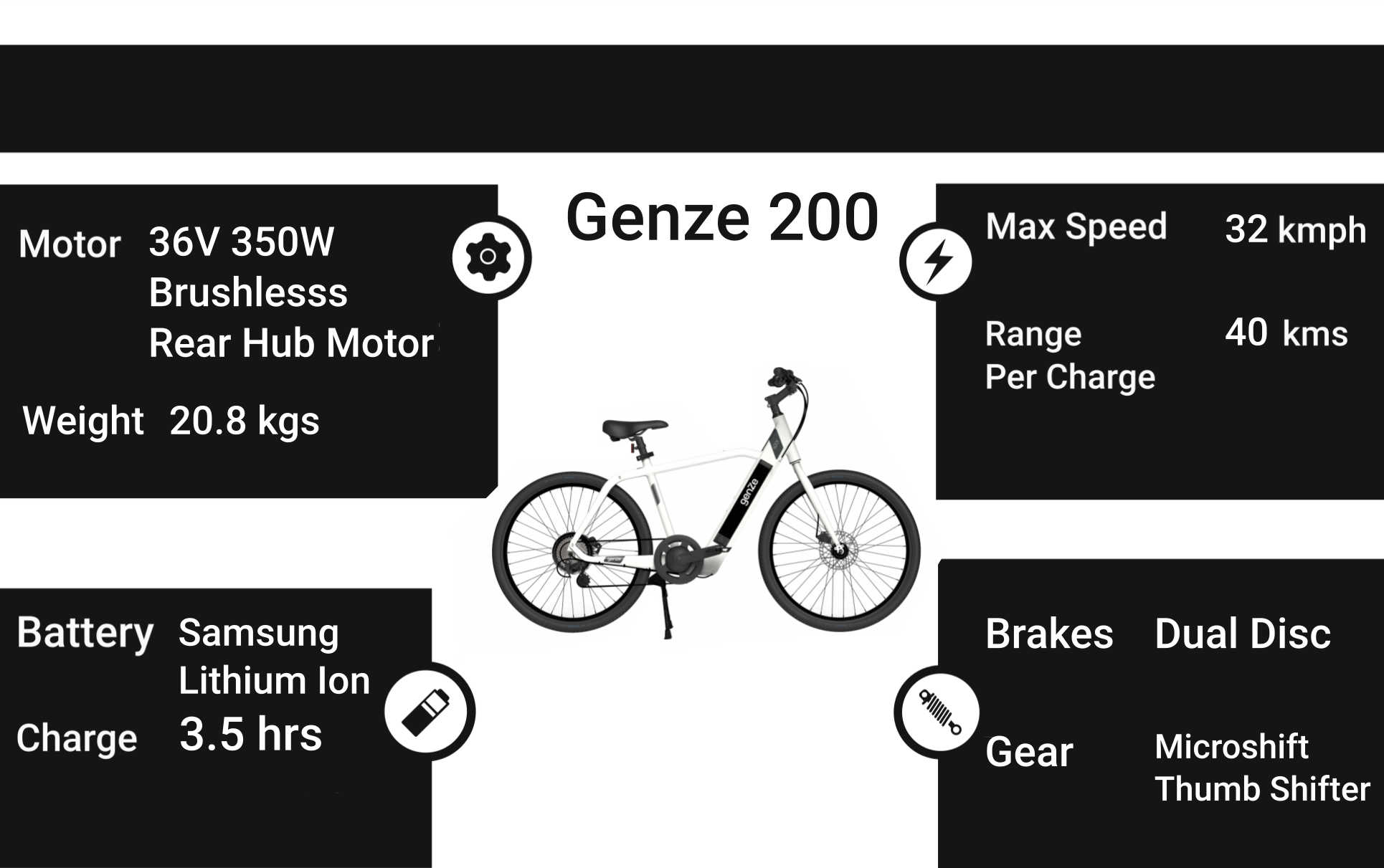 Featuring a sleek and lightweight aluminum frame design, the 200-Series ebike takes your riding experience to greater heights. Available in both black and white this ebike comes with a connected app, which allows you to plan activities, map distances and routes while also allowing connections with fellow riders.

The Genze 200 series e-Bike is available at GenZe retail locations across the U.S or online via GenZe.com website. Customers from outside the US can ship the product while incurring the relevant charges. 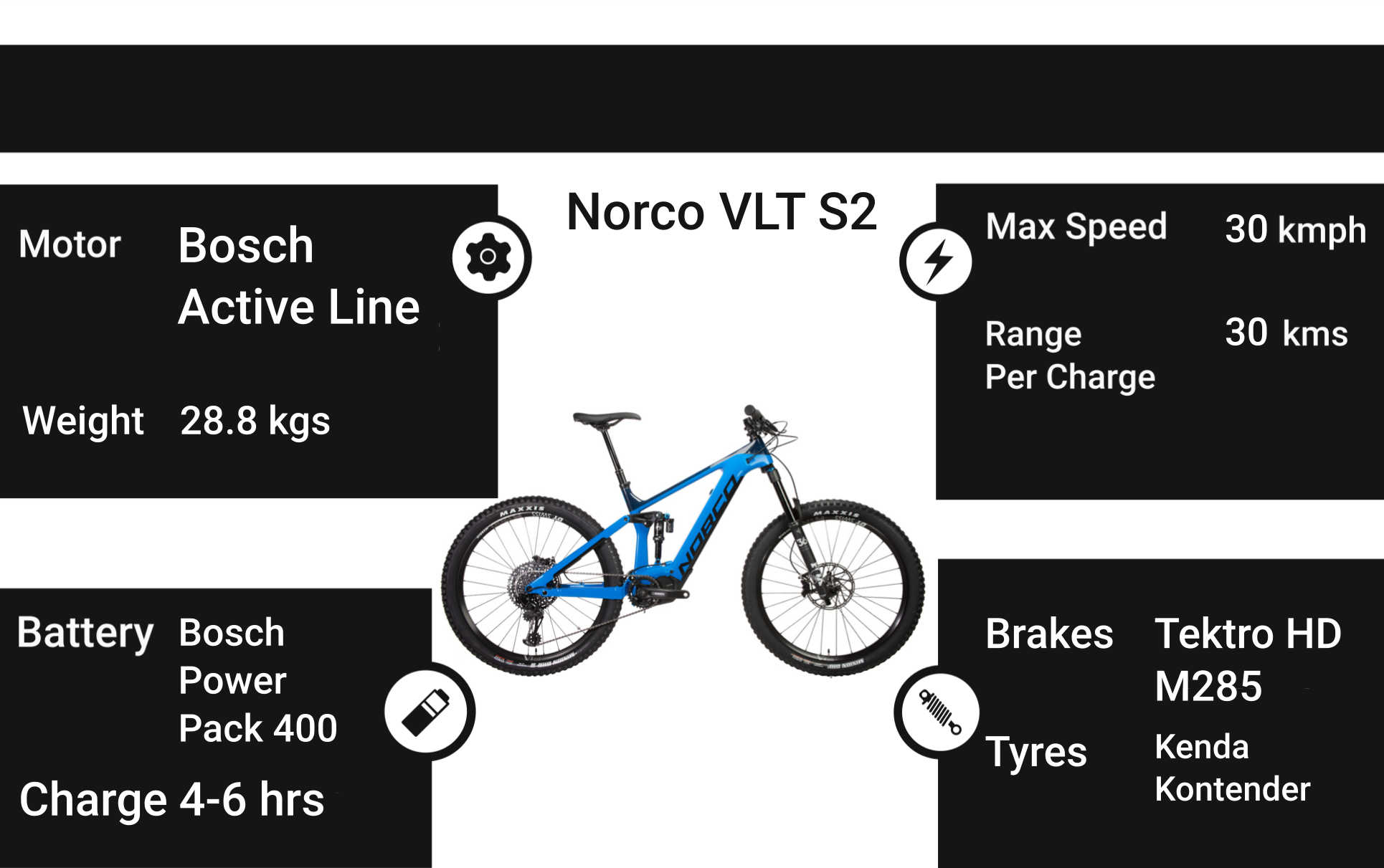 The Norco VLT S2 is a front suspension e-Bike with solid components alongside the reliable Bosch Performance Line Power systems that offer precise pedal assistance during any riding situation.

This item is available via the various Norco bikes international distributors. 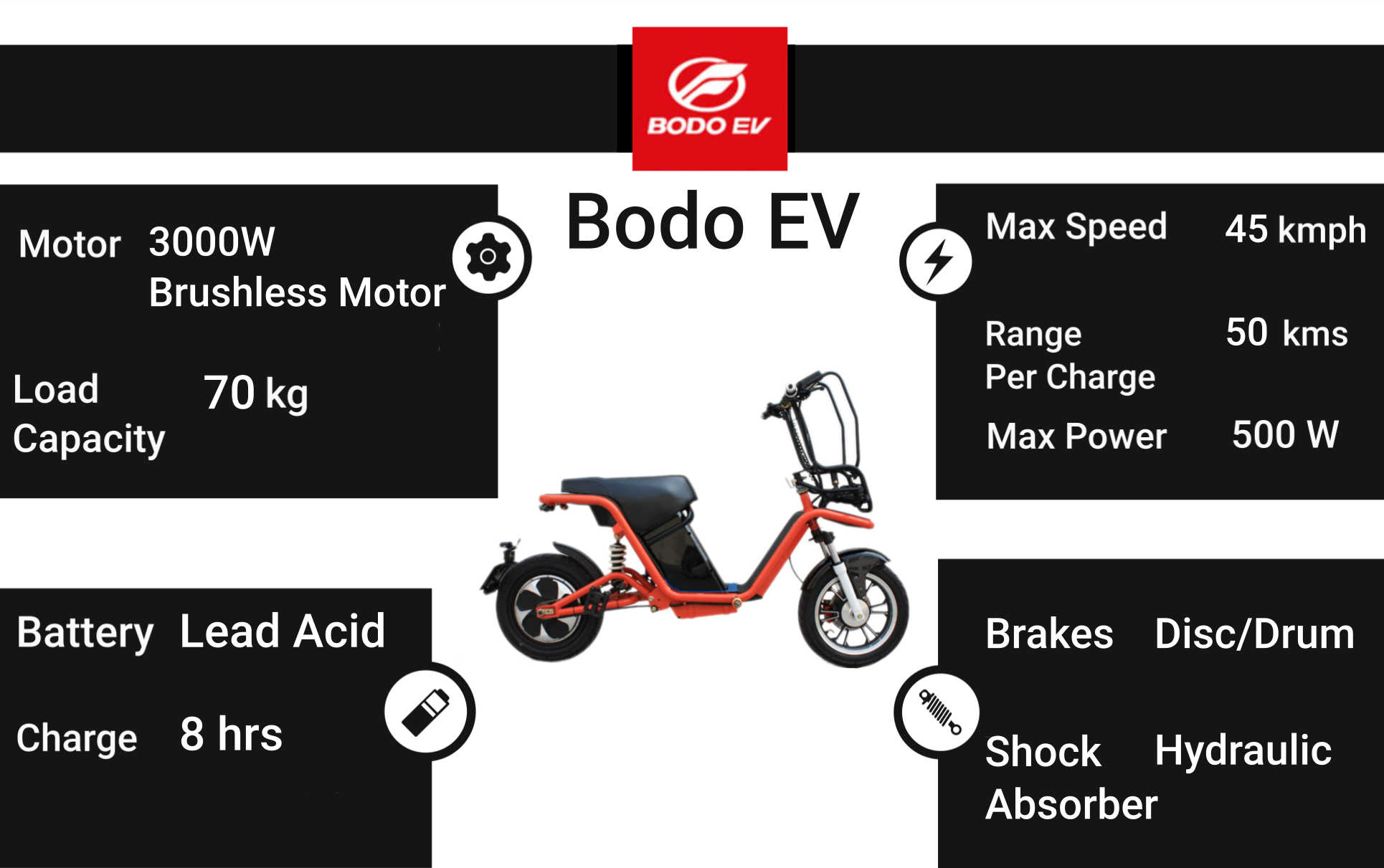 Manufactured by Bodo Vehicle Group Limited, the Bodo EV is specially designed for strong power and extraordinary long service to facilitate super amazing rides. The Bodo Vehicle Company is a striking top in electric vehicles brand field in China and across the globe. Their Bodo EV will no doubt provide your riders with high-level riding satisfaction owing to its high-quality design, strength, breaking stability and speed.

This item ships from China with buyers bearing the shipping costs and other variables prior to delivery.

We have a well-experienced & highly skilled team of designers & developers who can build high-performance mobile apps as per your specific business needs.

We have a well-experienced & highly skilled team of designers & developers who can build high-performance mobile apps as per your specific business needs. Hire best mobile app Designers & Developers from AppClues Infotech for your app development project.

Looking for a Top Mobile App Development Company in Chicago? Then AppClues Infotech is one of the best & most reliable mobile app development company in Chicago with expertise in iOS, Android & Cross-Platform mobile app development. We provide high-quality and best mobile technology solutions to our clients worldwide with advanced technology & functionalities at an affordable cost.