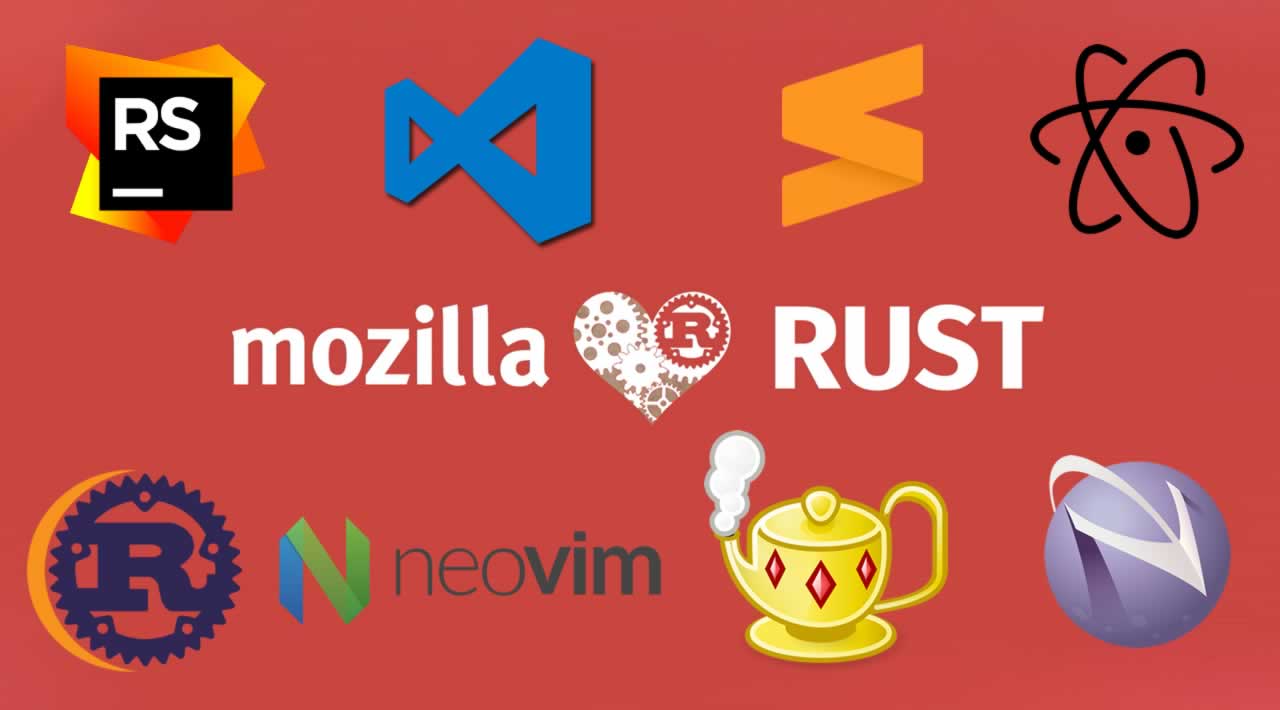 Apparently, a good Rust IDE & text editor must do two things very well: syntax highlighting (coloration of the code) and auto-completion. Best choice of Rust IDE & editors can easily configure the working environment, leading to better productivity. let’s highlight 8 best Rust IDE & text editors for web developers and take a bird’s eye view of how each one of them can assist us when developing Rust applications.

IntelliJ Rust is one of the most widely used Rust IDE. IntelliJ makes possible to link more then one project, even if you don’t use workspaces. There’s also a dedicated toolbar, which shows projects status. It provides all the mainly expected features including native code completion, broad navigation, intentions, formatting and much more.There’s also a preliminary debugger support.

RustDT is an Eclipse IDE for the Rust programming language. It contains a base workspace and an extensible plug-in system for customizing the environment. It’s a free and open source and provides Rich Client Platform (RCP) for development of general purpose applications.

Developed by GitHub, the highly customizable environment and ease of installation of new packages has turned Atom into the IDE of choice for a lot of people. It is worth mentioning that the code examples provided in this dunebook were actually coded using Atom only. you can easily add Rust Programming language support using Rust Atom package.

Sublime Text is a sophisticated text editor for code, markup, and prose. you’ll love the slick user interface, extraordinary features, and amazing performance. This is probably one of the most widespread code editors nowadays, some cool features of the sublime text. you can easily add Rust Programming language support to Sublime text using Rust Sublime text package.

Visual Studio Code is a source code editor developed by Microsoft for Windows, Linux, and macOS. It possesses basic features such as highlighting errors (and sometimes apply suggestions for fixing them), jump to definitions, show you the types of expressions, offer code completion, and more. It also includes advanced features such as support for debugging, embedded Git control, syntax highlighting, intelligent code completion, snippets, and code refactoring. Thus, it makes app development easier on any platform and has been supporting a range of major languages. Rust extension adds advanced language support for the Rust to Vs code.

Neovim is a pretty cool version and successor of Vim IDE. It is one of the best IDE for Rust to work with. Apart from all the basic features provided by most of the other IDE’s, it contains several other powerful features such as key-bindings and modes, editing documents exactly where you intend to, complete customization and modularity with plugins. It also contains different plugins used to enhance or change the behavior of core vim and get better results; the most important ones are Nerdtree, Tagbar, FZF, Neo-complete etc.

Geany is a light weighted and modern in design GUI based text editor, that supports almost all major programming languages. It offers all the common features that you expect for any modern text editors, such as syntax highlighting, Auto-completion, Multiple document support, Simple project management, Syntax highlighting, Code folding (partially), Symbol lists, Code navigation and line numbering. As soon as you’ll open it up, you will find a lot of clean white space area to work in.

Spacemacs in yet another text editor used for programming in Rust. It does provide the developers with all the basic features such as Auto-completion, Error detection, and correction, but apart from it, it has other major features such as community-driven configurations, Maintaining two completely separate keybinding systems and community maintained layers.It is an extensible and customizable text editor, which basically combines both Emacs and Vim editor, taking the best features of both of them and providing it together as one.Thus, you need to install Emacs first to operate Spacemacs.

Apparently, all these IDE’s possess their own advantages and the developer needs to see what he/she needs the most and should make choice accordingly. There are various other IDEs also that can be relied on for programming in RUST, apart from the mentioned ones, as per the user needs. All the best for your choices!