How to integrate Munq IOC Container Version 3 in ASP.NET MVC 3 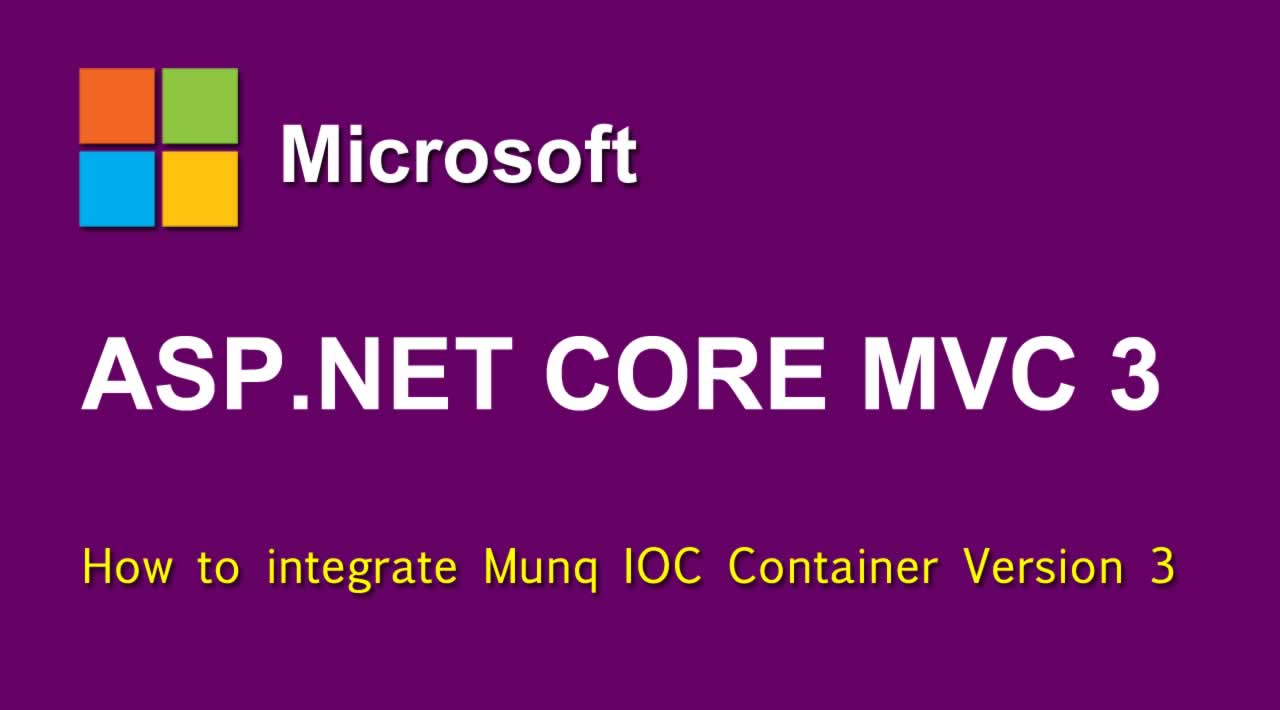 Munq IOC Container Version 3 has been released on CodePlex and as a NuGet package. This article demonstrates how to integrate the IOC Container into an ASP.NET MVC3 project.

For my example, I will refactor the AccountController to use Dependency Injection and the Munq IOC Container. At the end, I will have:

The final solution will allow you to easily replace the IFormsAuthenticationService and IMembershipService implementations through the IOC Container configuration. As an added bonus, you can replace the instance of the MembershipProvider used by the AccountMembershipService.

As a result of the feedback and suggestion I have received, and the need to use the IOC Container with ASP.NET MVC3, I have released an updated version of Munq. In addition to the core IOC Container, there is an implementation of the ASP.NET MVC3 IDependencyResolver and the Common Service Locator. All three are available as NuGet packages.

Probably, the most important additions to the Munq IOC container are:

Show Me the Code

The first thing to do is to create a MVC3 project, selecting the Internet Application option. Also select ASP.NET as the view engine, and check the box for unit tests. This creates a simple starting point that includes a Home page, an About page, and Form based authentication using SQL Express.

Build and run the application, just so we know it works. Also, run the unit test to verify they pass.

If we take a look at the AccountController.cs file, we see that the dependencies for this controller are wired up in the Initialize method:

We want to change this to use Dependency Injection so we will remove this method and add a constructor which has the authentication and membership services as parameters. Also, the FormsService and MembershipService properties expose implementation details that should not be needed by users of the controller. We won't fix that right now, as it will break a number of the unit tests, and isn't important in showing how to get the Dependency Injection working.

A quick refactoring and we end up with:

Build the solution and we get an error in the unit test stating that AccountController does not have a constructor with no parameters.

Also, the AccountMembershipService class, defined in Models/AccountModels.cs has a parameterless constructor. Remove it. Also change the other constructor as shown below:

We now have a successful build and all the tests still pass, but when we run it, we get an error when we click on the logon link. The error...

...which as the stack trace explains is caused by the AccountController.

Now, we need to add the IOC Container. Fortunately, I have created a NuGet package for using the Munq IOC Container in MVC3. I am assuming that you have NuGet installed in your copy of Visual Studio. Right click on the MuncMvc3Sample project and select Add Library Package Reference .... This will bring up the NuGet dialog. Search for Munq in the online packages. You will see three choices. Install the Munq.MVC3 package. 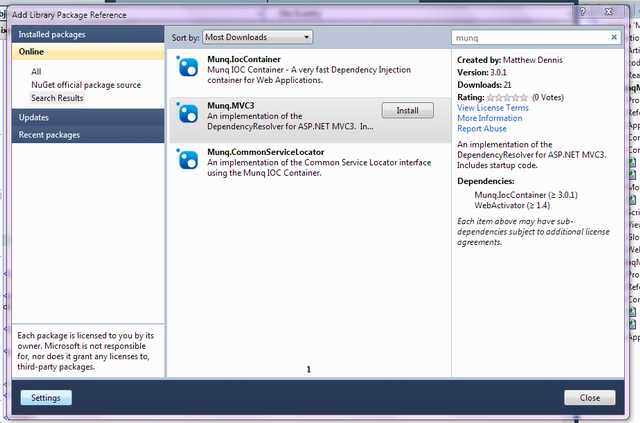 This installs and adds references to:

Additionally, a directory App_Start is created and contains one file, MunqMvc3Startup.cs. This file contains the code to configure MVC3 to use the Munq IOC Container for its dependency resolution tasks.

Make sure the Development Web Server is stopped, so the startup code is executed. Now try and build and run. We still get the error. This is because we haven't Registered the implementations for IFormsService and IMembershipService. Because of this, MVC falls back to attempting to create the AccountController with the parameterless constructor, which does not exist. In MunqMvc3Startup.cs, register the services.

Again, stop the Development Server and then build and run. Now, when you click run, the login form is displayed. MvC3 is now using Munq to resolve the dependencies. Notice that we did not have to register the AccountController class itself. For classes, Munq will attempt to resolve using the constructor with the most parameters. This is exactly what MVC3 requires, and why the feature was added to Munq.

This means, if you add or delete parameters (dependencies) to a Controller's constructor, it will still be resolved as long as the dependencies are Registered or are classes.

Next, I want to refactor out FormsService and MembershipService properties from the AccountController class. I'm using CodeRush, so the refactoring is pretty easy.

Building now results in a number of errors in the unit test that were using this property. I will not detail the changes here, but you can see them in the source files included.

The result of this example is a Visual Studio project that can be used as a template for future development with ASP.NET MVC3 and the Munq IOC Container.

8 Reasons Why PHP and .NET Rule the World of Web Development

Building a website is the first step in the path of a successful business. For web development, PHP and .Net are the foremost languages. If any company wants to succeed in the market, it needs to strengthen its digital presence. Though social media provides a place to gain some attention, it is impossible to create a brand without an official web page. This is why businesses hire firms offering web development services to get their website designed, which would enable them to get as much traction as possible.