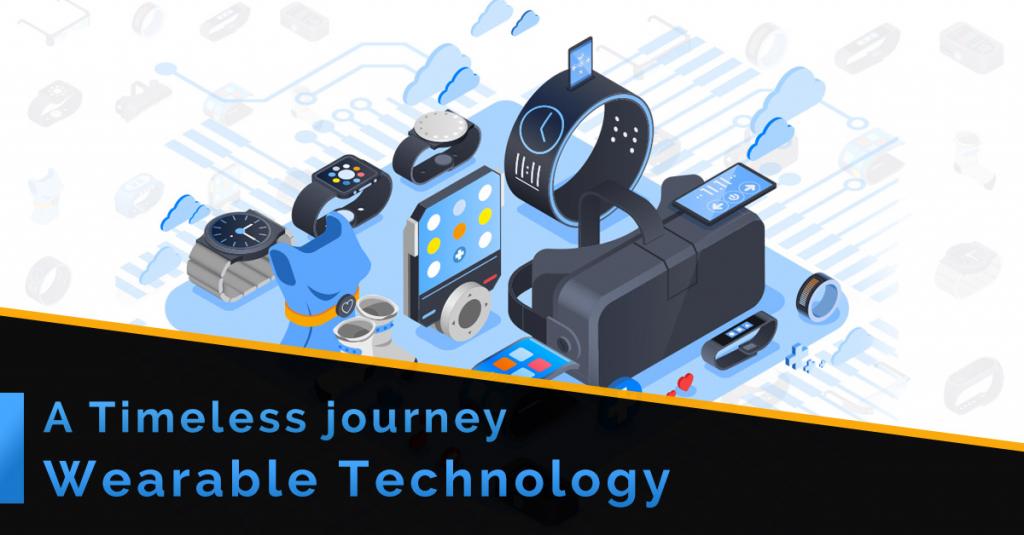 If you think that the emergence of wearable technology is after the proliferation of mobile technology and Smartphones, you are wrong. Humans have been using Wearables since the last 5 centuries when small watches were worn as a necklace in Germany in the 1500s. Before the pocket watches came into fashion, men carried watches in their pockets in the waistcoat in the 1600s, proving time and again the relationship of wearable and humans.As time passed, wristwatches became smaller, precise, and accurate, and people started using them for various purposes other than keeping time in check. In the modern-day, wearables find use in multiple sectors such as fitness, wellness, pharmaceuticals, fashion industries, and many more.Through all these years, the technology developers have designed Wearables such that people can use it as a stylish accessory, and users can inculcate it without any hassle.Since wearable technology is easier to use, a large number of people couple it up with their Smartphones or use them separately to monitor their health and other things.Wearables have proved to be a boon for many industries such as retail, manufacturing, and many more. Wearables are crucial as they can aid and speed up all the vital processes in the industries to increase production.Thus, it sets us up correctly to take a look at the journey of Wearable Technology from scratch and see what it has in store for us in the future.A Peek into the pastAt the turn of the new millennium, companies started extensively using wearables in clothing and accessories. There were shirts designed in 2004, which had tele-transmitting touches, thus allowing the users to operate them over a distance. This experiment with the wearable technology was unique because it was the first time that the garment sector used the technology Four years later, companies started using wearables as a hearing device coupled with the Bluetooth technology. This design replaced the heavy over the head look of the earphones, thus curbing down the weight and adding a style statement. The idea behind designing the wearable technology was to make the device multipurpose, to make the device suitable for listening songs as well as answering calls on the go.The varied usages are the reason why over 27 million devices are sold all over the world in the last four years.Reading the presentWith the proliferation of technology, we can see a plethora of wearable devices around us in the present times. Be it fitness, healthcare, or automobile; wearable technology has made its presence felt as it has made access to important data very easy.  With an increase in popularity, companies began to create wearables for mass consumption and not only focusing on superficial futuristic concepts.In 2015, the mobile OS giant Apple launched Apple watch, and it became the best selling wearable device in history, with 4.2 million sold in the second quarter of 2015. Before Apple Watch, the initial offering of smartwatches to the world was given by Samsung when the company launched the Samsung galaxy gear in 2013. The doctors use wearable devices as implants under the skin to track the insulin level beneath the skin. Doctors surgically implant the devices to make sure that the doctors get regular updates about the health of the patient in concern. A lot of impetus is given to wearables in the healthcare industry.Believing in the FutureWearables are all set to take the healthcare sector to a new level with their prolific technology in the future. The doctors and nurses will have various options to use wearables in checking heart rate, blood pressure, the release of a certain kind of biochemicals.Moreover, as common users can deploy wearables easily in their daily life, they can keep their calories burned and time spent exercising in check.In addition to this, in future wearable technology can be used in forecasting changes in stress and mood apart from measuring the blood alcohol content.Moreover, the athletes can use it to track their performance and be better at the time of the event. Doctors can monitor the patients suffering from heart-related problems for a long time as the wearable device will give concrete analysis for better treatment.Apart from the healthcare, wearable technology will rise to an unprecedented level in clothing accessories. There will be clothes that could have touch-sensitive areas, and you can control your smartphone through them.Wearable technology will play a huge part in sports accessory. There will be a 3D printed carbon fiber dress that will change its color, measuring the adrenaline levels of the user. Moreover, smart sports innerwear will respond to the changes in the body as the athlete advances in their sport. Challenges for the wearablesThe challenge that the wearable technology will face is to create a user base that is sustainable and has a lot of engagement. Wearable electronics die as they don't have a larger rate of user engagement. Moreover, miserable battery life, awful design, and UX problems are some of the other functional reasons why users refrain from using wearables for a longer period. But the new age wearable devices have remarkably overcome all the shortcomings, and wearables are all ready to be one of the technologies of the future. Final WordsWearable technology is going to be one of the pillars of future technology expansion along with AI, AR, and Big Data. Apart from health medicine and fitness, the wearable app development companies aim to include wearables in the field of education, finance, gaming, music, and many more. The hands-free nature of the technology makes wearables exciting and appealing to the general audience. There will be easy access to data on the go. Wearables will help people to finish the task in businesses and also in their daily lives.

Wearable technology is going to be one of the pillars of future technology expansion along with AI, AR, and Big Data. Apart from health medicine and fitness, the wearable app development companies aim to include wearables in the field of education, finance, gaming, music, and many more. The hands-free nature of the technology makes wearables exciting and appealing to the general audience. There will be easy access to data on the go. Wearables will help people to finish the task in businesses and also in their daily lives.

Read More: The Journey of Wearable Technology and what it will look like in the future

Want to develop a solution for logistics business? The list of Top Logistics App Development Companies can help hire the best app developers to build your logistic & transport app.