Microservices on Knative with Spring Boot and GraalVM

In this article, you will learn how to run Spring Boot microservices that communicate with each other on Knative. I also show you how to prepare a native image of the Spring Boot application with GraalVM. Then we will run it on Kubernetes using Skaffold and the Jib Maven Plugin.

This article is the second in a series of my article about Knative. After publishing the first of them, Spring Boot on Knative, you were asking me about a long application startup time after scaling to zero. That’s why I resolved this Spring Boot issue by compiling it to a native image with GraalVM. The problem with startup time seems to be an important thing in a serverless approach.

On Knative you can run any type of application – not only a function. In this article, when I’m writing “microservices”, in fact, I’m thinking about service to service communication.

If you would like to try it by yourself, you may always take a look at my source code. In order to do that you need to clone my GitHub repository. Then you should just follow my instructions

On Kubernetes, both these applications will be deployed as Knative services in multiple revisions. We will also distribute traffic across those revisions using Knative routes. The picture visible below illustrates the architecture of our sample system.

5. Communication between microservices on Knative 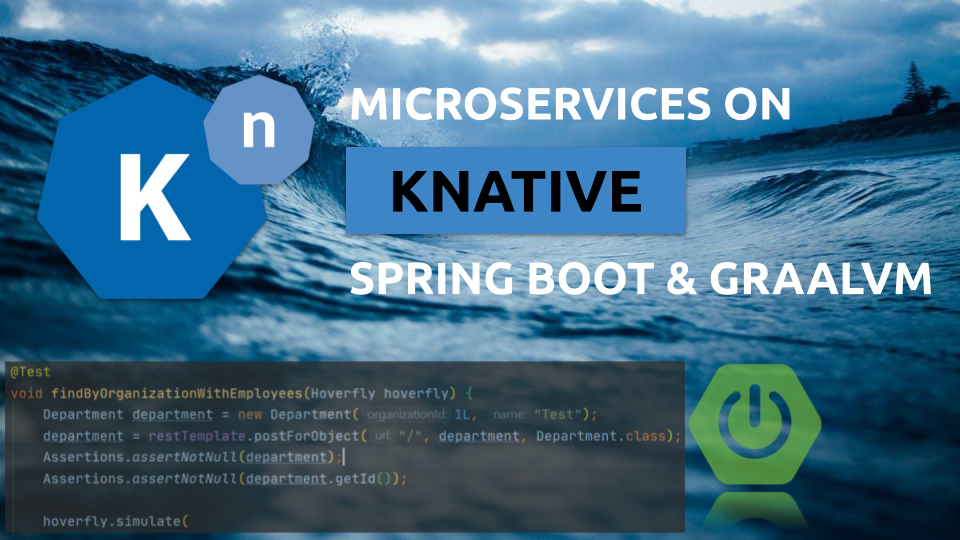 The producer is a service that exposes an API (e.g. rest endpoint) or sends a message (e.g. Kafka Producer which publishes the message to Kafka Topic)

The contract is an agreement between the producer and consumer how the API/message will look like.

Consumer-driven contract (CDD) is an approach where the consumer drives the changes in the API of the producer.

Consumer-driven contract testing is an approach to formalize above mentioned expectations into a contract between each consumer-provider pair. Once the contract is established between Provider and Consumer, this ensures that the contract will not break suddenly.

To understand the concept of the Spring Cloud Contract, I have implemented two simple microservices. The code for these applications can be found on Github account.

Request and response between the consumer and the producer

It is the first microservice responsible for creating an employee’s profile based on the given details. We are only passing the FirstName, LastName, and Identification Number (e.g. National ID) of the employee. This microservice is calling another microservice to first check, based on the Identity Number, whether the profile has already been created for the employee.

This is the second microservice service that is just checking if an employee profile already exists. If the employee profile is matching with the Identification Number provided in the database, it will return the profile else return an empty profile with the EMPLOYEE_NOT_FOUND status.

How to Configure the Interceptor With Spring Boot Application

In the video in this article, we take a closer look at how to configure the interceptor with the Spring Boot application! Let’s take a look!

Spring vs Spring BooDifference Between Spring and Spring Boot

As an extension of the Spring Framework, Spring Boot is widely used to make development on Spring faster, more efficient and convenient. In this article, we will look at some of the parameters were using Spring Boot can drastically reduce the time and effort required in application development.

Difference between Spring and Spring Boot

Advantages of Spring Boot over Spring Learn how to update config values in your microservices at runtime without having to restart them. Learn how to use Actuator endpoints to trigger refresh and use the RefreshScope annotation to have the values refresh in the microservices.