14 most popular Angular interview questions in 2020 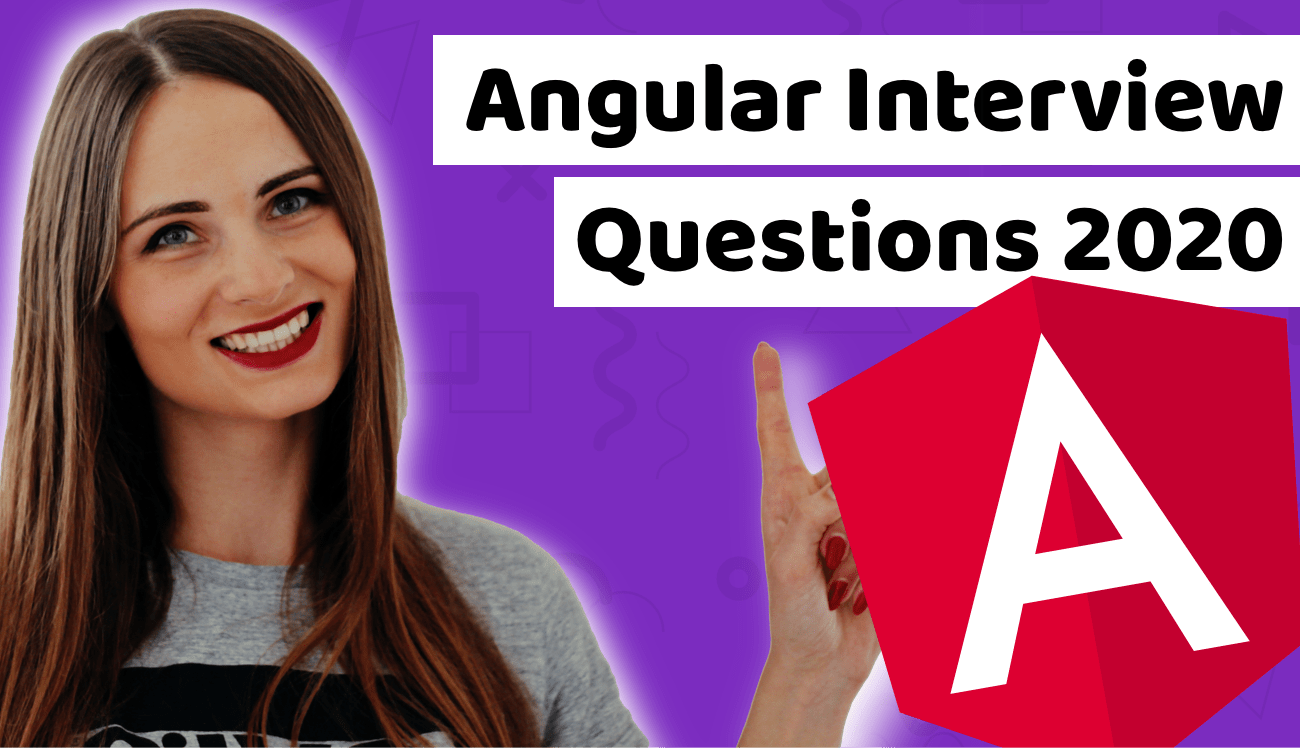 In this article, I decided to create a list of 14 questions about Angular which can be very helpful in your next interview for the position...

This article was originally published at https://www.blog.duomly.com/angular-interview-questions/

Some time ago, we started a series about Javascript interview questions, we've gone throng some questions about React.js, CSS, and backend.

But still, we didn't cover all the technologies that are important for front-end developers; that's why today, I decided to create a list of 14 questions about Angular, which can be very helpful in your next interview for the position with Angular.

I'm going to start with the fundamental information that can be useful for junior developers, and then I'll also cover some more advanced aspects of this framework.

Of course, you must remember about preparing from other programming aspects like Javascript, HTML, and CSS. But I hope you'll find this list of questions and answers useful before the next interview.

As always, I have a video for those who prefer watching and listening to the explanation rather than just reading.

1. What’s the difference between AngularJS and Angular?

A. Components are the most basic building blocks of the Angular framework. They consist of three parts: view, class, and styles. View element loads and renders the template, styles element takes care about loading the styles, and class part are responsible for the logic of the component. Components can be created using Angular CLI command: ng generate component <name>. Here’s the example of the empty component:

B. Modules refer to places where we can group components, directives, and services in an Angular app. There can be two types of modules: root and feature. Each application can have one root module and many feature modules. To define a module, we have to use NgModule decorator, and each application has one module created with the application at the beginning. Here’s the code example of the app.module.ts.

3. What are directives in Angular?

Directive is a very important concept in Angular. It’s used to extend the HTML and giving it a new syntax. Directives can be predefined or custom.

4. How does Dependency Injection work in Angular?

To make a service or class injectable, we need to use @Injectable decorator.

Let’s take a look at the image when I tried to illustrate the dependency injection in Angular application. 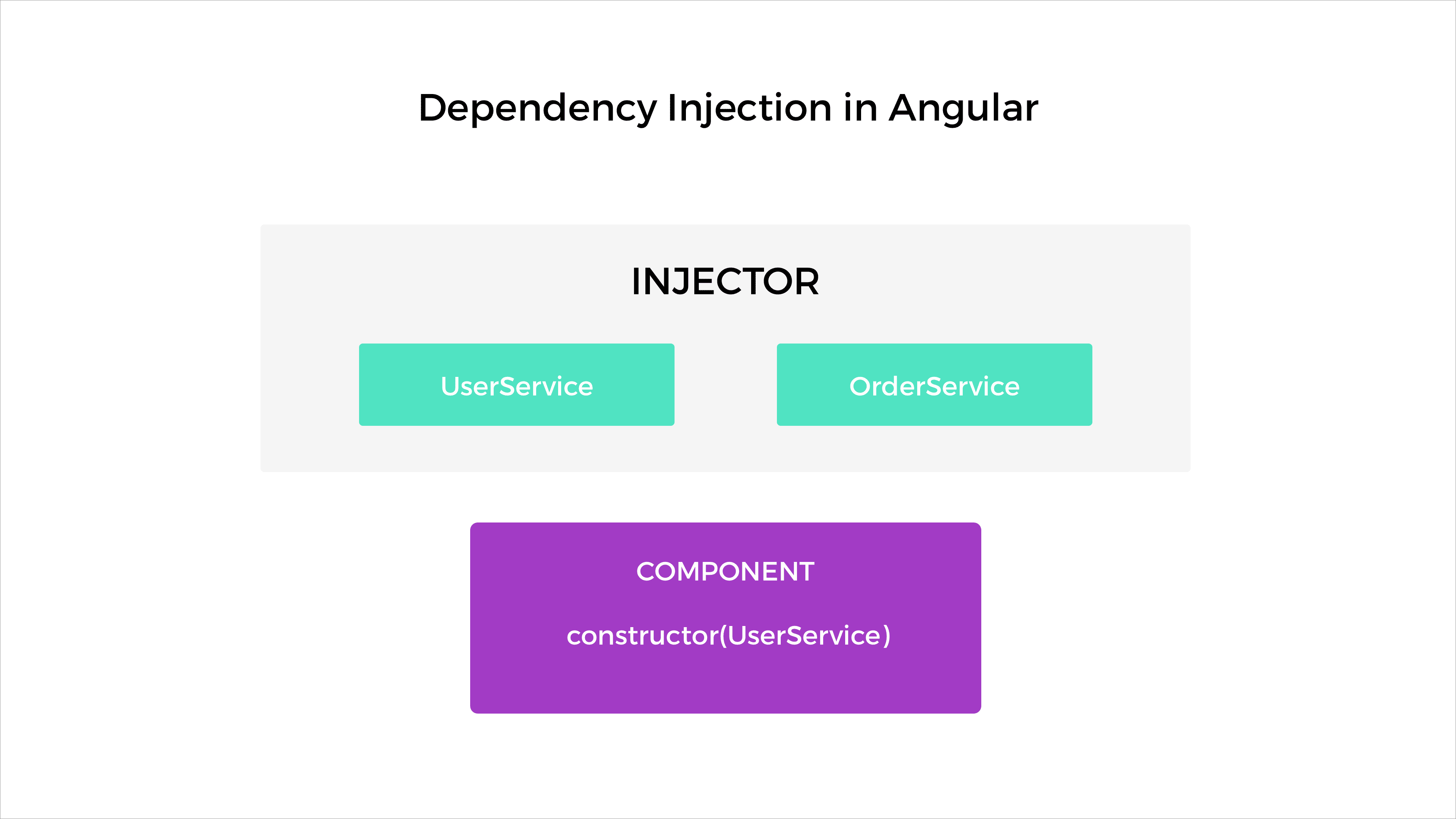 5. What’s the difference between Angular expressions and Javascript expressions?

The one-way data binding (unidirectional) allows us to bind data only from component to the view or from the view to the component. In Angular, it can be handled in a few ways.

Interpolation: {{data}} - it passes the data from the component to the template.

Property binding: [property]= "data" - it passes a value from the component to the specific property of the HTML element, such as the value to the input element. It can be used for classes and styles as well.

Event binding: (event)= "function" - it passes data from the DOM object to the component. If any event happened, the component gets the information and can perform an action.

Those methods are one-way data binding, but as I mentioned before, it's also possible to use two-way data binding in Angular and pass data in both ways. For that, we use the ngModel (Angular's directive for binding value of HTML elements to the application) and [()] syntax. It's a great idea to use it, for example, in the inputs.

7. What’s AOT and JIT, and what’s the difference?

Angular application has to be compiled before the browser can understand it and run. There are two methods of compilation provided by Angular framework: 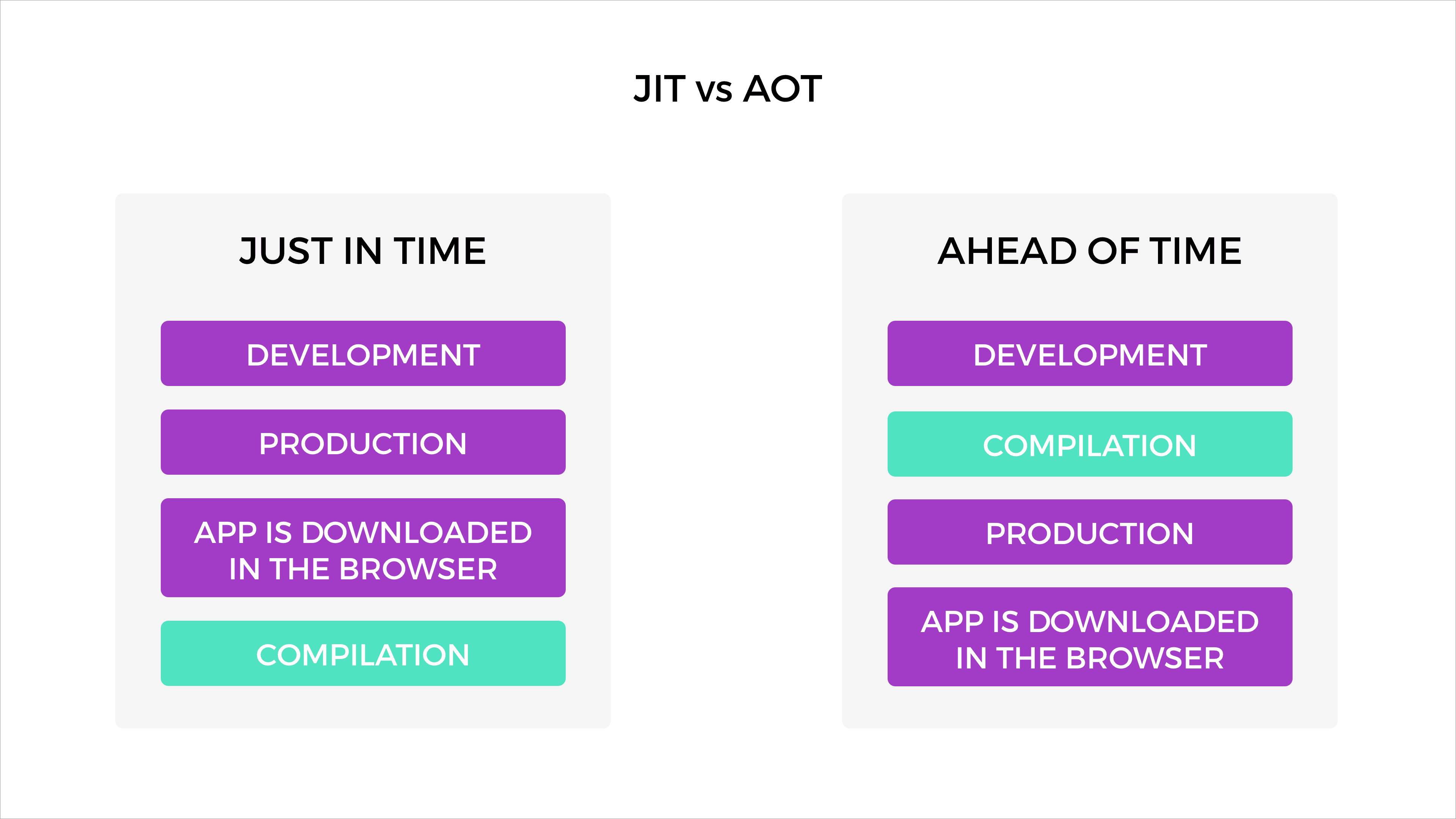 In the image above, you can see the stages that the application is going through before seeing it on the screen.

The main advantage of AOT is the faster rendering of the application because the code is ready to be shown when the browser downloads it. It also minimizes errors because they are detected and handled during the building phase. It also provides better security.

By default, Angular apps are compiled with the JIT method. To compile with AOT, it’s enough to use —aot flag after ng build or ng serve.

Let’s take a look at the image and let’s got through the steps that the Router does to display the page. 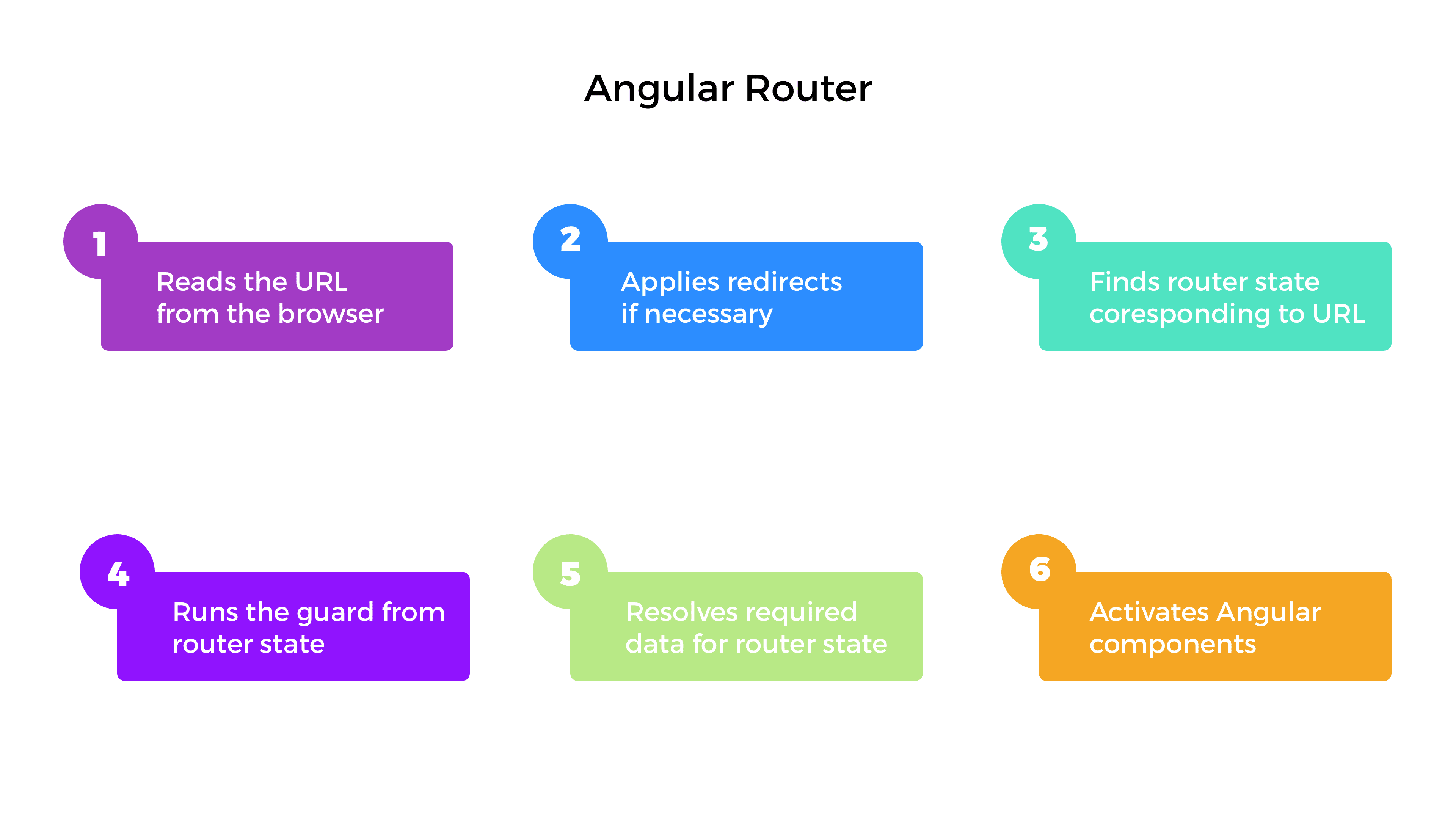 In the image above, you can see the six steps that Angular Router does from taking the URL from the browser to display the component.

Every component in Angular has its lifecycle and different stages of the lifecycles. Each lifecycle has hooks that allow us to interact with the component on the specific phases.

Let’s take a look at the hooks of Angular components.

ngOnChanges() - it’s the method that is called once when the component is created, and later every time, any input properties of the component will change. It takes a SimpleChanges object as a parameter. It gives and the current and previous value of the input if that exists.

ngDoCheck() - it’s used to detect changes that are not detected by Angular itself. It’s called on every change detection, after two first methods. This hook is not good for performance as it’s invoked very frequently, so it should be used carefully.

ngAfterContentInit() - this method is called only once, after first ngDoCheck() and it gives us access to ElementRef of the ContentChild.

ngAfterViewChecked() - this hook responds when Angular checks the component’s view and component’s child views. It’s called after ngAfterViewInit() and after every ngAfterContentCheck().

ngOnDestroy() - it’s the last method of the Angular’s component lifecycle. It’s the place where we should clean up our component before destroying it, which means we should unsubscribe observables or events. It’s called just before Angular destroys the component.

Rxjs is a library, commonly used with Angular framework. It supports reactive programming, which is the asynchronous programming paradigm focused on data streams and change propagation.

Rxjs use Observables, which make it easier to create asynchronous code; it also provides some utility function to help us use work with Observables.

11. What’s the difference between observables and promises?

Subject is similar to Observable, it can be subscribed and unsubscribed. It also have the same set of methods like .next(), .error(), .complete().

The Subject is multicast, and Observable is unicast.

There are three types of subjects:

Behavior Subject - they store the current value, and because of that, we can always directly get the last emitted value from the Behavior Subject. It can be done using .value property or by subscribing to the Subject.

The Behavior Subject can be created with the initial value, which isn’t very easy with Observables.

Replay Subject - this kind of Subject is similar to the Behavior Subject in case of passing current value to the new subscribers.

But Reply Subject goes even further. It gives us the possibility to define how many values we want to „remember” and for how long. Then the amount of values is sent to the new subscriber.

Async Subject - in this case, only the last value of the Observable execution is sent to the subscriber, and it’s sent only when the execution completes, so the .complete() method needs to be called.

13. How components interact with each other in Angular?

Passing data between Angular components can be done in a few different ways, depending on the relation between the components.

In the case of Parent to Child relationship, we can use @Input decorator. Let’s take a look at the code example.

From Child to Parent, we can use @ViewChild decorator. Let’s also take a look at the code example.

Another example of passing data from child to parent component is with @Output and EventEmitter.

In this example, we used @Output and EventEmitter for passing the data from the child component to the parent component.

We can also pass data through the services if the components are not connected with each other directly.

14. What are Angular pipes?

Pipes in Angular are classes with @Pipe decoration, which transform data input to required data output according to the logic in the pipe.

In this article, I went through the most popular questions asked during the interview for front-end developers with Angular.

I’ll start by covering basic information like the difference between AngularJS and Angular or which are models and directives. Also, I covered some more advanced concepts like Observables and Subjects.

I hope you’ll find this article useful, but keep in mind that preparation from different technologies is necessary as well. Please take a look at the list of the Javascript interview questions we’ve prepared.

Thank you for reading and good luck on your next interview, Anna