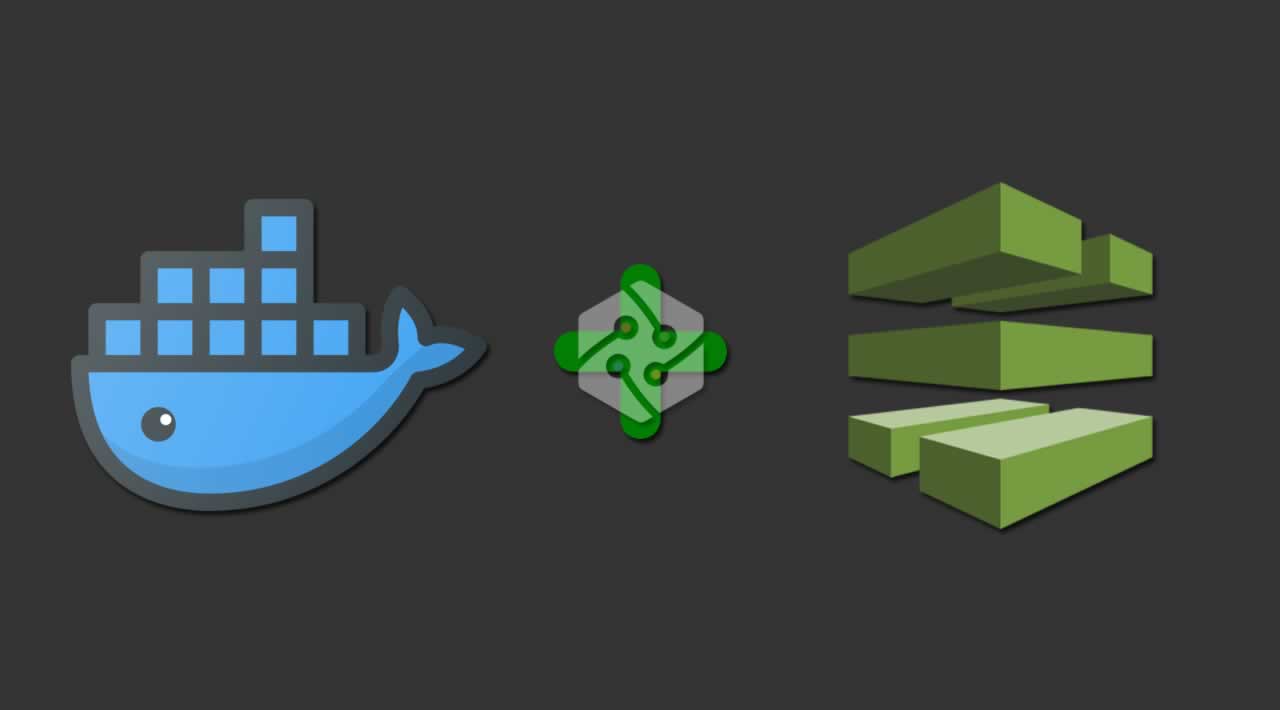 Docker containers may be deployed using one of the several cloud platforms, Amazon Elastic Container Service (ECS) being. AWS CodePipeline is a DevOps service for Continuous Integration, Continuous Delivery and Continuous Deployment of applications hosted on various AWS platforms.

Docker containers may be deployed using one of the several cloud platforms, Amazon Elastic Container Service (ECS) being. AWS CodePipeline is a DevOps service for Continuous Integration, Continuous Delivery and Continuous Deployment of applications hosted on various AWS platforms.

For the example application deployed to ECS an AWS CodePipelineconsists of a source code repository such as a GitHub repo, AWS CodeBuild for Build and a AWS ECS (Fargate) service for Staging.

The benefit of using an AWS CodePipeline for an AWS ECS service is that the ECS service continues to run while a new Docker image is built and deployed.

A Docker container deployment may need to be updated or modified due to changes in the Docker image source code or code build. Any modifications in the source code for a Docker image would require that a Docker image be rebuilt and the Docker service be redeployed. Without a mechanism to integrate, build, deliver and deploy source code while an AWS ECS deployment is running, it would involve stopping the ECS service tasks and as a result, incurring downtime for an ECS service. High availability of an ECS service being a priority, stopping tasks to redeploy an application is not a suitable option.

Creating and deploying a CodePipeline application to ECS Fargate involves the following procedure:

Creating and Testing the Container Service

Next, create an ECS container service in the default cluster as shown in Figure 3.

With Fargate launch type an Elastic Network Interface (ENI) is provisioned for each task. Copy the Public IP of the task, which is the same as the Public IP of the Elastic Network Interface, from either the task Details page Network section or the ENI Console. Open the URL :8080 in a browser to invoke the Node Service application. The Node Server returns a message as shown in Figure 4.

Creating or Configuring an S3 Bucket

The CodePipeline to build the Source code for the Node server application and deploy a Docker image to an ECS service requires that the CodeBuild project generate “Output Artifacts”. The Output artifacts are stored in an S3 bucket, which is selected when creating a CodePipeline. Create a new S3 Bucket in the S3 Console, or alternatively select a S3 bucket that may be created from an earlier run of CodePipeline.

The Create project wizard gets started. In Configure project specify a Project name (node-server). In Source>Source Provider select GitHub. For Repository select Use a repository in my account and Choose a repository as the _dvohra/docker-node-server _ repo. Keep the default setting for Git clone depth as 1.

Select the options for Webhook, Insecure SSL and Build Badge. Selecting Webhook makes the code get rebuilt every time a code update is made in the GitHub repo. The Insecure SSL option makes the code build SSL warnings when connecting to project source. The Build Badge option makes the project’s status visible and embeddable. In Environment: How to build select Environment image as Use an image managed by AWS CodeBuild. Select Operating System as Ubuntu. For Runtime, select Docker as shown in Figure 6. 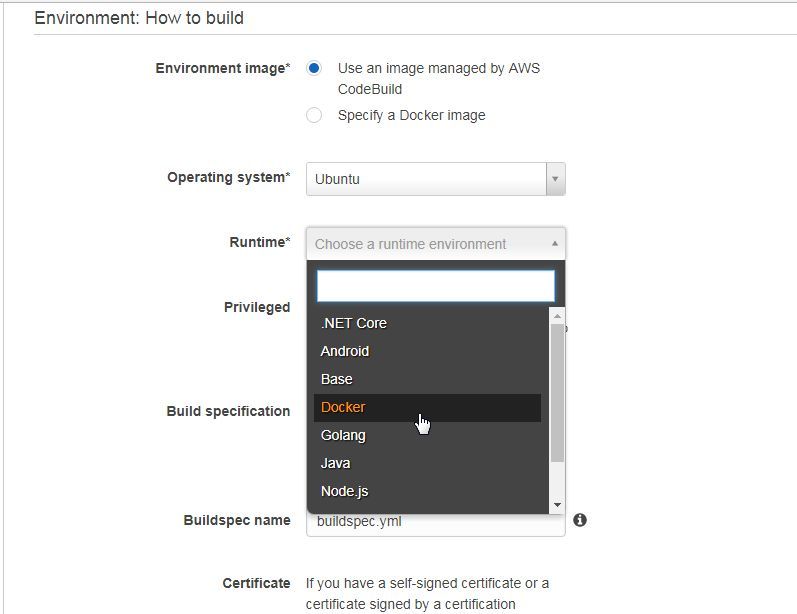 For Runtime version, select aws:codebuild/docker:17.09.0, which represents the Docker version 17.9. If a later version is available select the later version. The Privileged option gets selected automatically for Docker runtime as it is required to build a Docker image. For Build specification select Use the buildspec.yml in the source code root directory as shown in Figure 7. The Buildspec name is buildspec.yml by default. 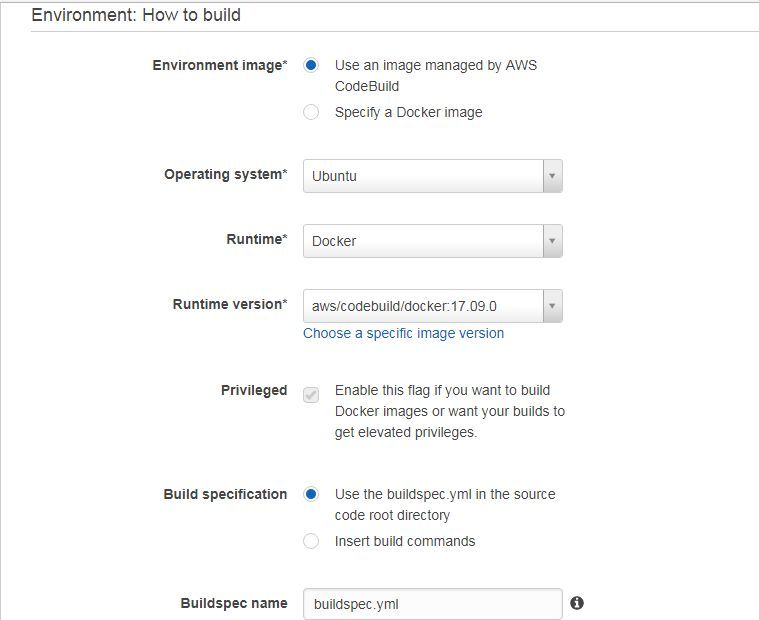 Figure 7. Configuring Environment: How to build

For Certificate select Do not install any certificate. A certificate is not required by CodePipeline, but for a more secure CodeBuild a self-signed certificate could be installed from S3. Next, configure the output artifacts in the Artifacts. Output artifacts are required by CodePipeline Select Type as Amazon S3. Specify a S3 bucket folder name to use. Set the Path as “/”, which creates the folder at the bucket root. Select Namespace type as Node. Select a Bucket name as the Bucket configured earlier as shown in Figure 8. Select Cache as No cache. 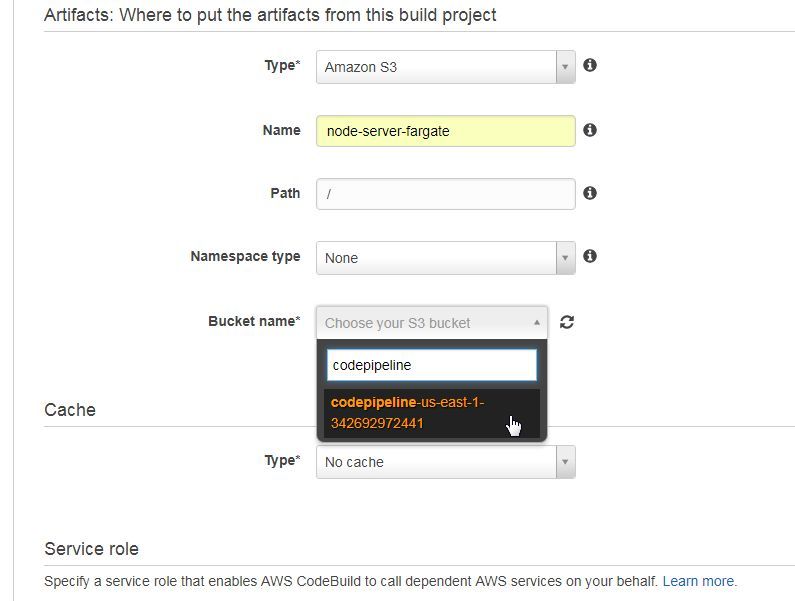 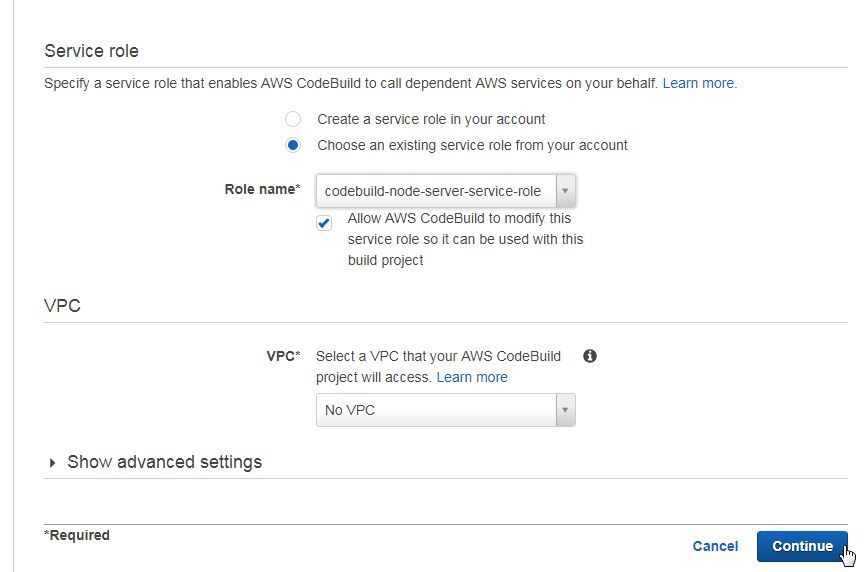 Test the CodeBuild project before creating and configuring the CodeBuild in a CodePipeline so that if any errors exist they may be fixed. Click on Start build to start the build as shown in Figure 11. 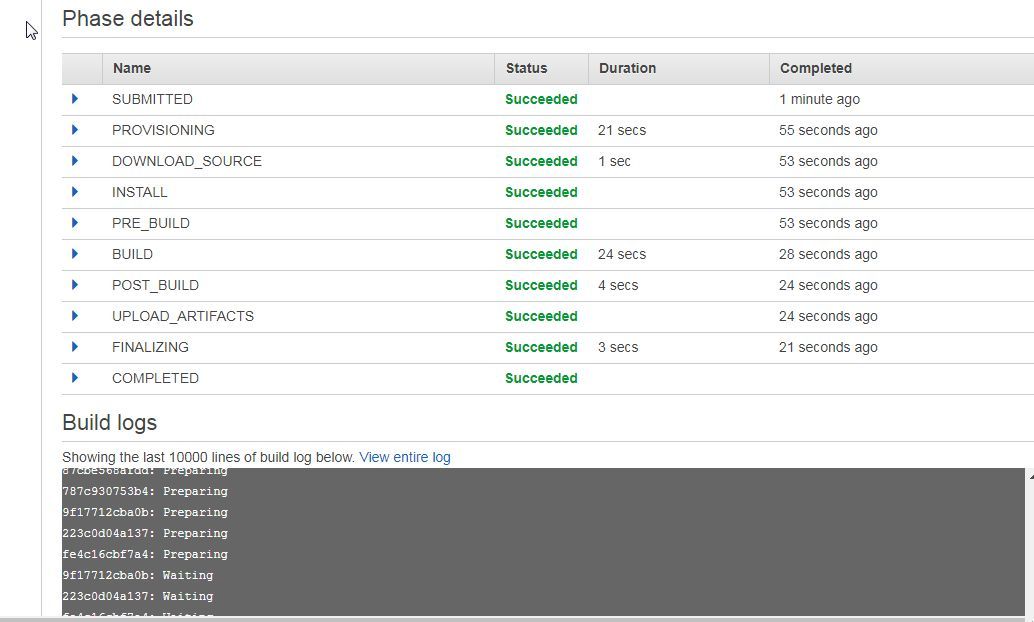 Figure 12. Phase details and Build logs indicate that the CodeBuild has completed

The Docker image dvohra/node-server generated and updated by the CodeBuild project to Docker Hub is shown in Figure 13.

Having created projects for each of the CodePipeline stages; GitHub code repository for Source, CodeBuild for Build and ECS Fargate service for Staging, next we shall create a CodePipeline. Open CodePipeline Console with URL and click on Get started as shown in Figure 14.

The Create pipeline wizard gets started as shown in Figure 15. First, specify a Pipeline name (node-server-fargate) and click on Next step.

Next, configure the Source location. For Source provider select GitHub as shown in Figure 16.

Next, connect to the GitHub with Connect to GitHub as shown in Figure 17. 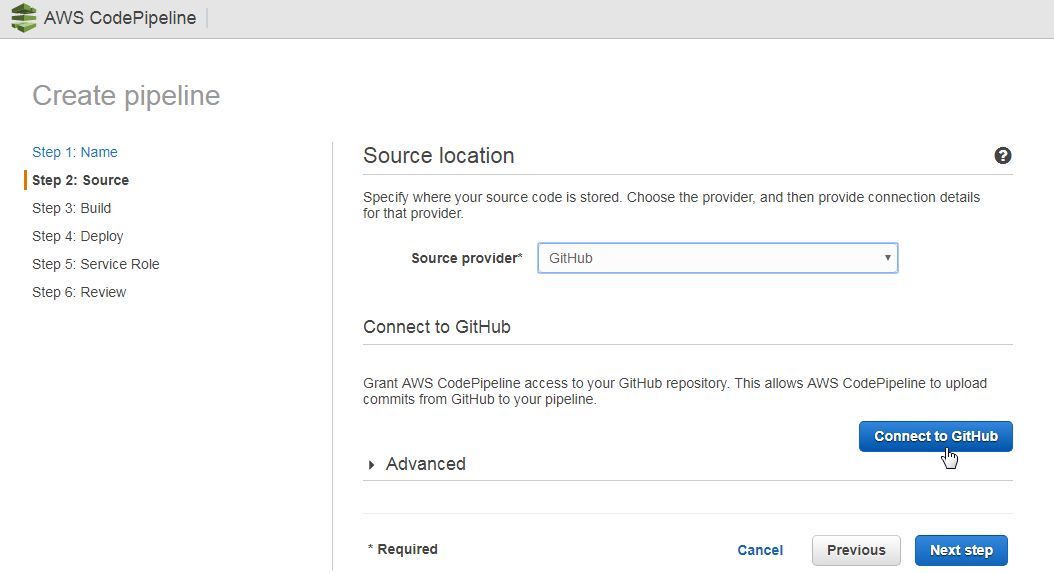 Select the GitHub Repository as shown in Figure 18.

Select the repo Branch as shown in Figure 19. Click on Next step. 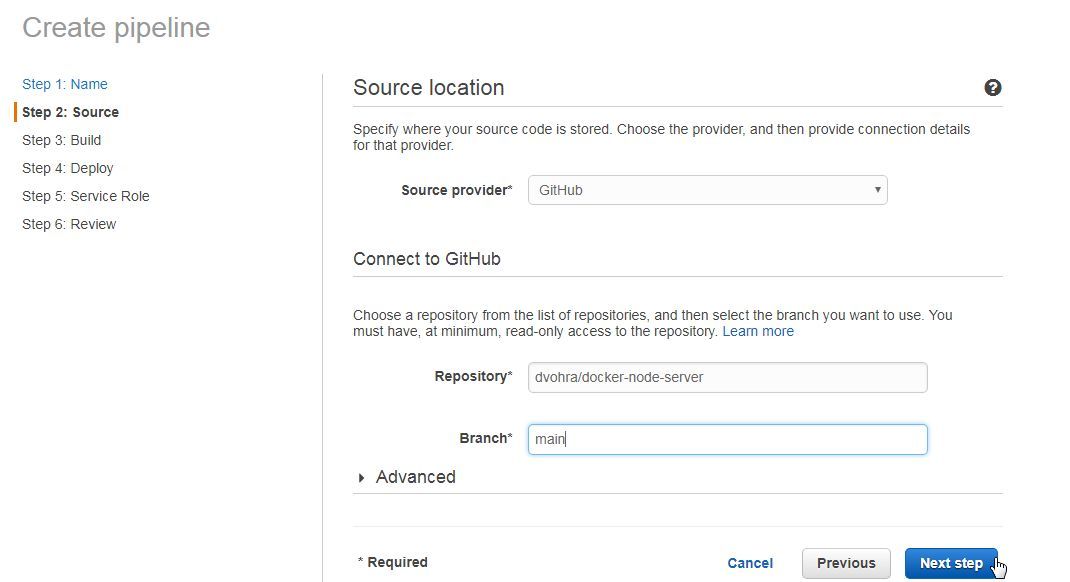 Next, configure the Build. Select Build provider as AWS CodeBuild as shown in Figure 20.

The subsequent section displayed is based on the Build provider selected. For AWS CodeBuild, a section to provide details about the CodeBuild gets displayed. For Configure your project select Select an existing project as shown in Figure 21. Select Project name as the CodeBuild project node-server created earlier. 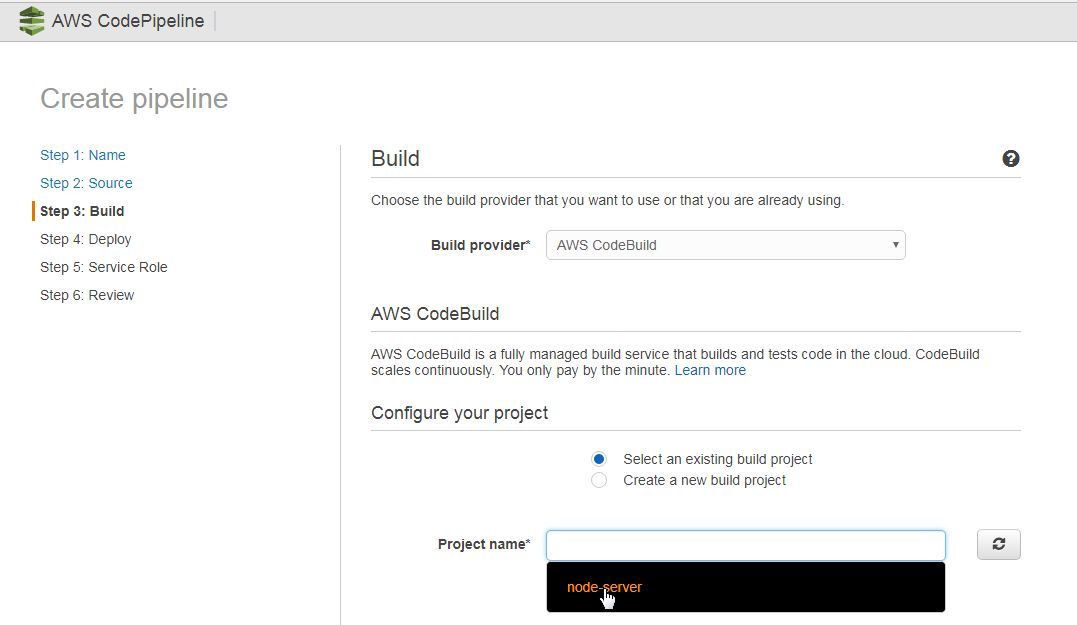 Click on Next step. Next, configure the Deploy stage of the CodePipeline as shown in Figure 22. Select Deployment provider as Amazon ECS. 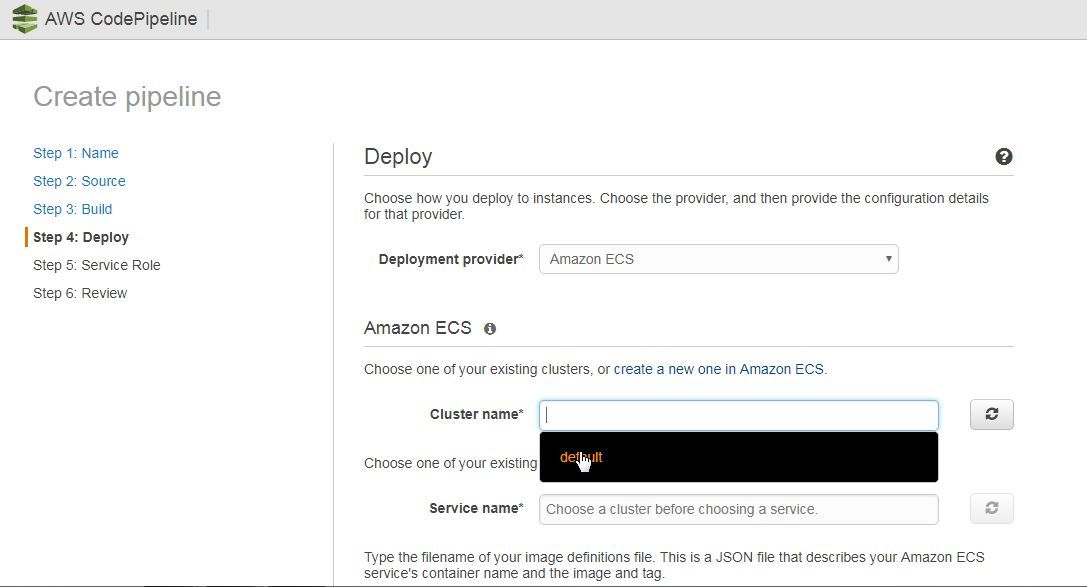 Select the Service name as the ECS service to deploy to, which is node-server-service, as shown in Figure 24. 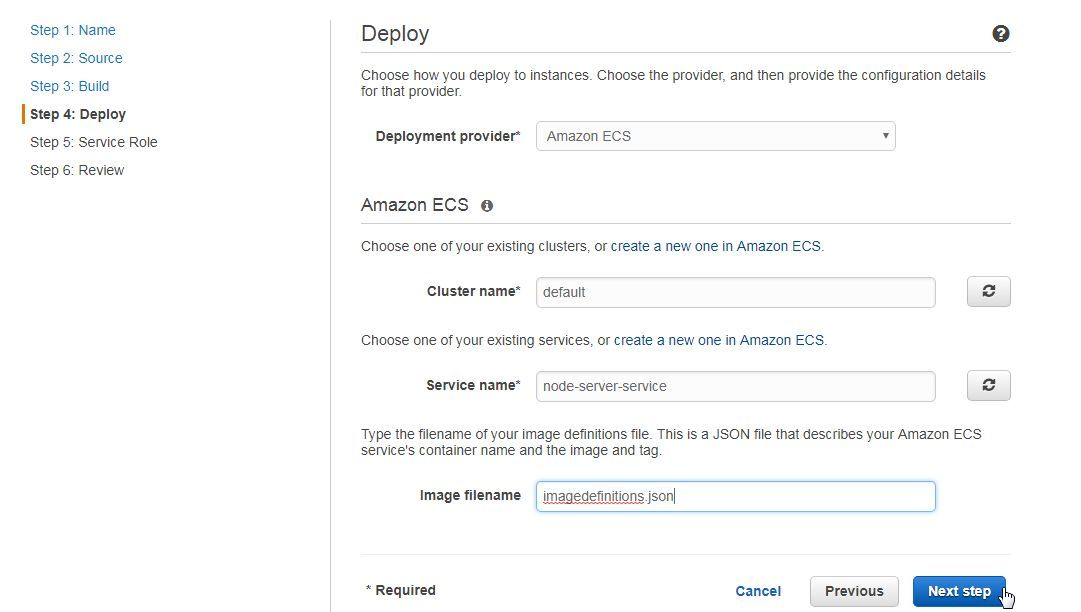 Next, select the Service Role name as shown in Figure 26. A new service role is created in IAM automatically the first time a CodePipeline is created. Subsequently, the Service role gets listed to be selected. 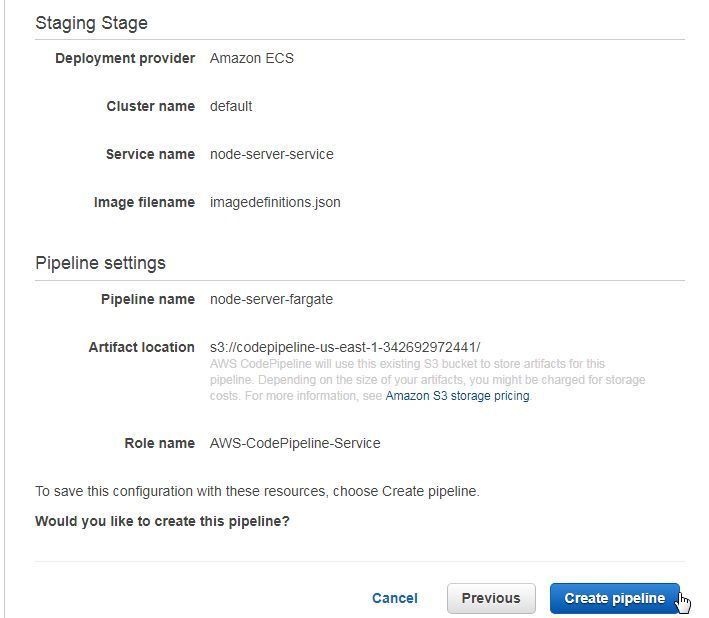 A CodePipeline gets created as shown in Figure 28. After getting created the CodePipeline starts to run automatically as shown by In Progress status for Source stage. 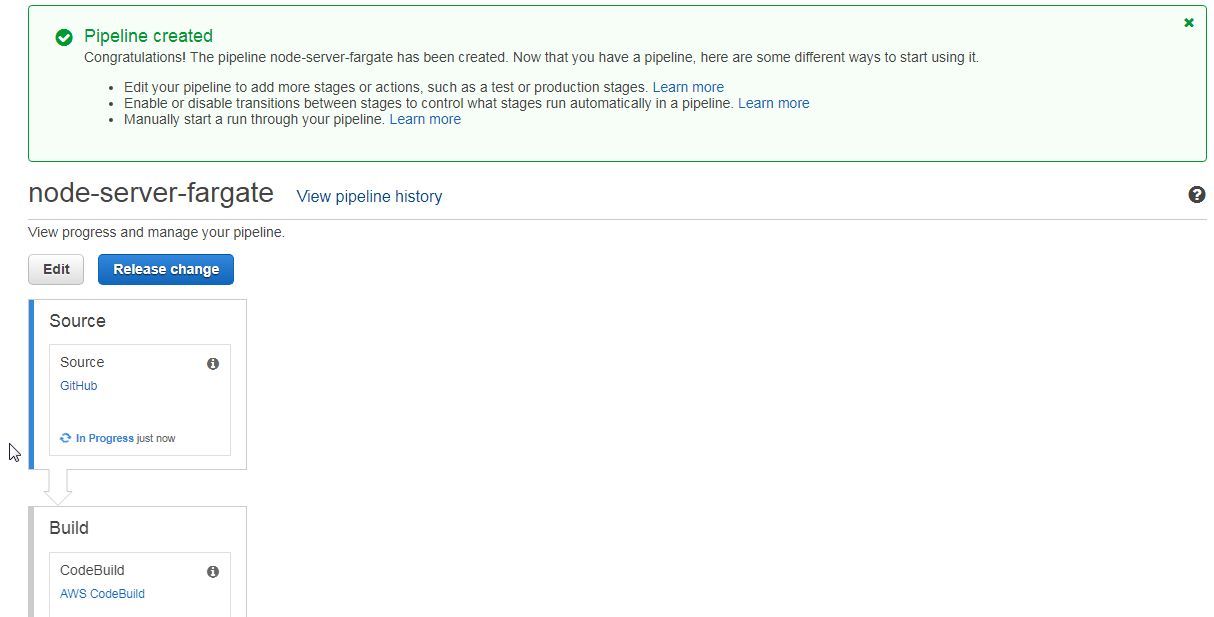 When the Source stage completes, its status becomes Succeeded as shown in Figure 29. And the Build stage starts to run as indicated by the In Progress status. 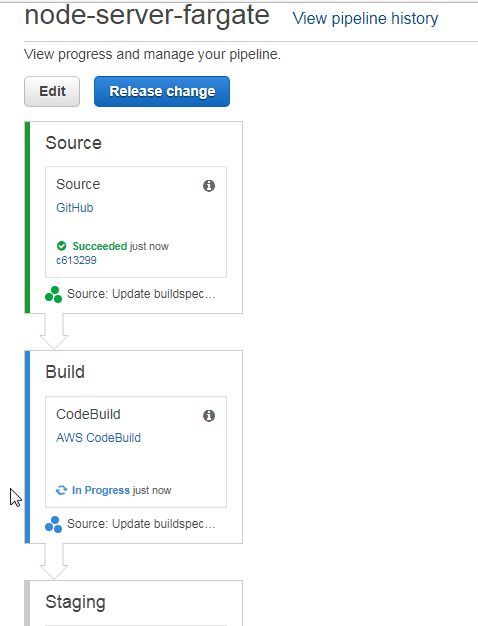 The Build stage also gets completed as indicated by the Succeeded status in Figure 30. The Staging stage starts to run. 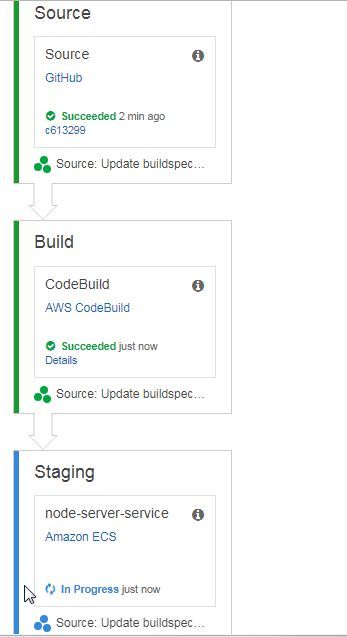 After modifying the Input/Output artifacts, click on Save pipeline changes as shown in Figure 32. 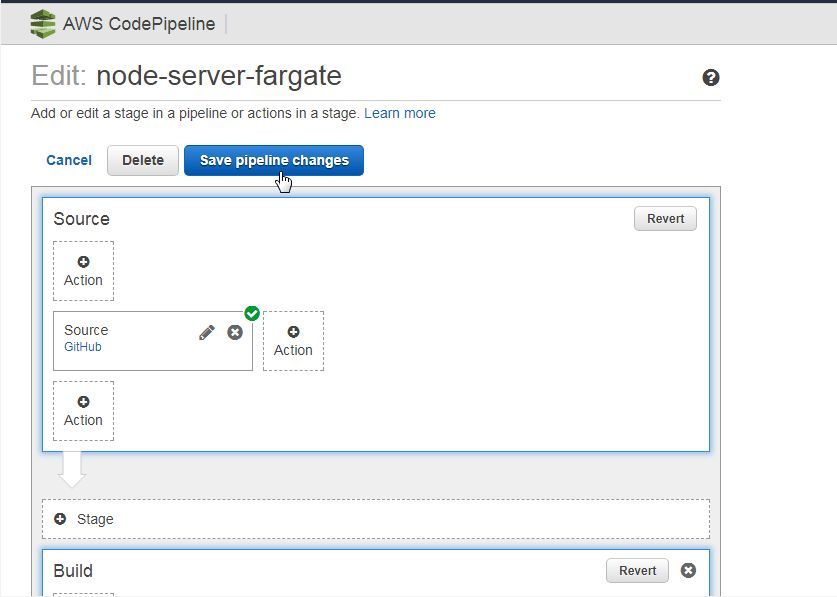 To run the CodePipeline after modification, click on Release change as shown in Figure 33.

In the Release change confirmation dialog, click on Release. The modifications made to the CodePipeline get applied and the CodePipeline starts to run from the start as indicated by the In Progress status for the Source stage in Figure 34. The status for the Build and Staging stages are from the previous run and does not indicate the current status of the stages. 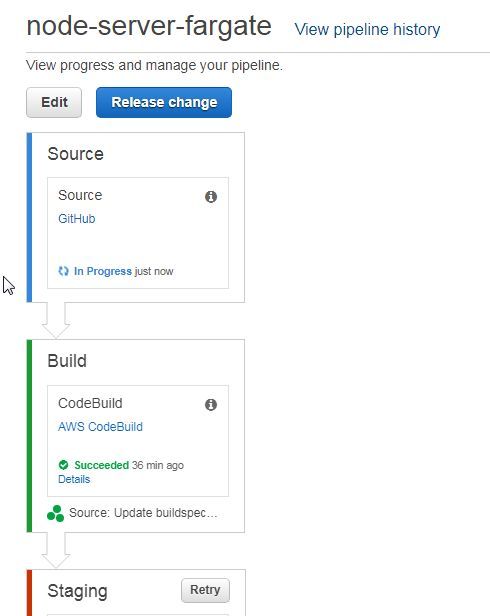 All stages of the CodePipeline get completed with status Succeeded as shown in Figure 35. 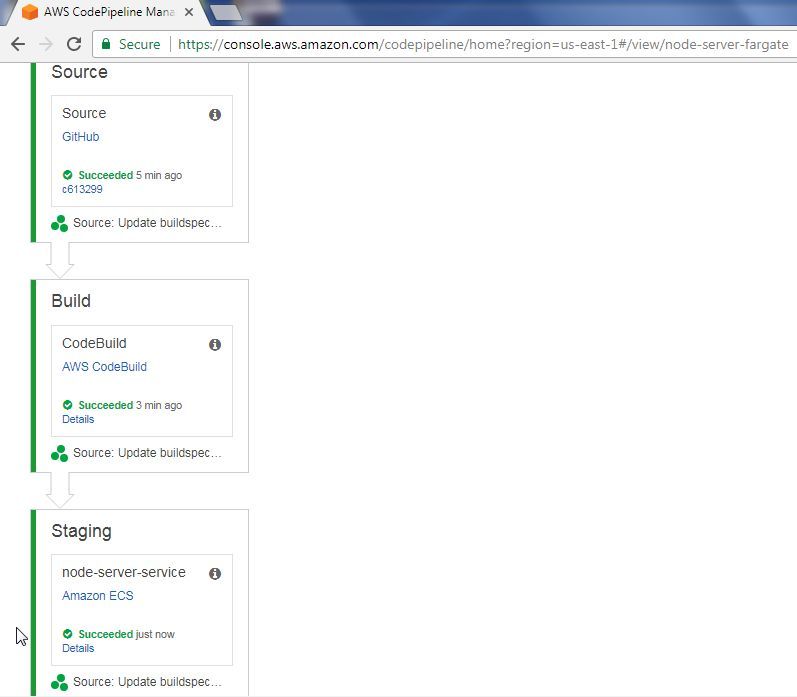 The previous service task gets stopped and a task based on the revised task definition starts to run as indicated by the RUNNING task status in Figure 36. 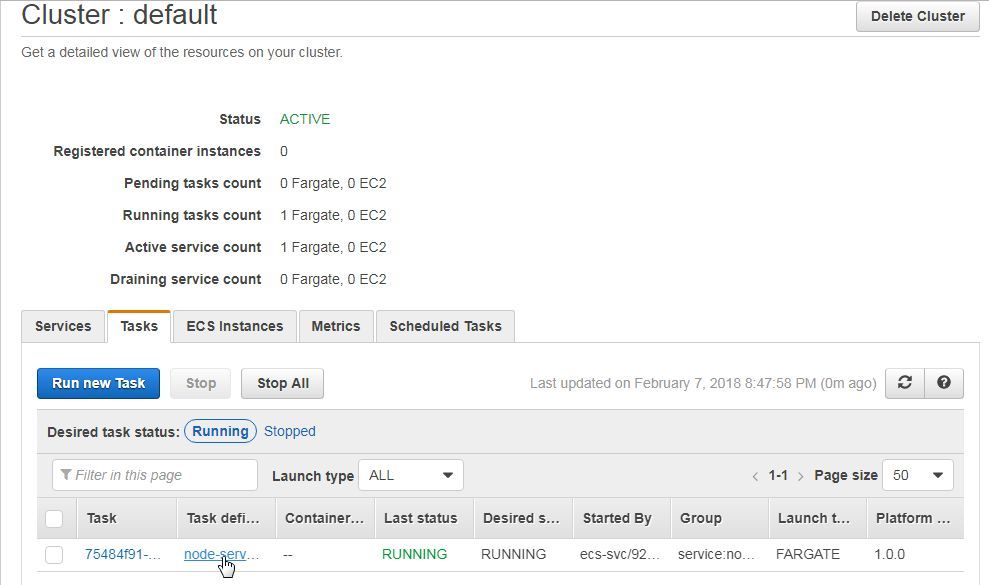 To invoke the new task, find its Public IP as before from the Elastic Network interface for the task. Open URL :8080 in a web browser to invoke the task. The Node server application response is shown in Figure 37.

To demonstrate, make a slight modification to source code in the GitHub repo, such as make the Hello message in server.js different. Click on Commit changes in the repo. The CodePipeline starts to re-run automatically as shown by the Source stage having completed successfully and the Build stage in progress in Figure 38. 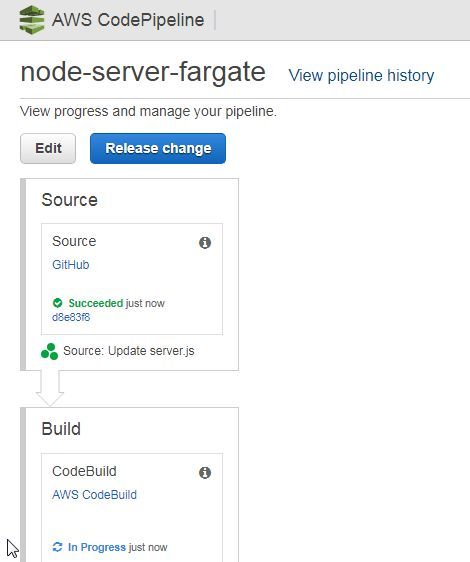 After the Build stage completes successfully, the Staging starts to run as indicated by the status messages in Figure 39. 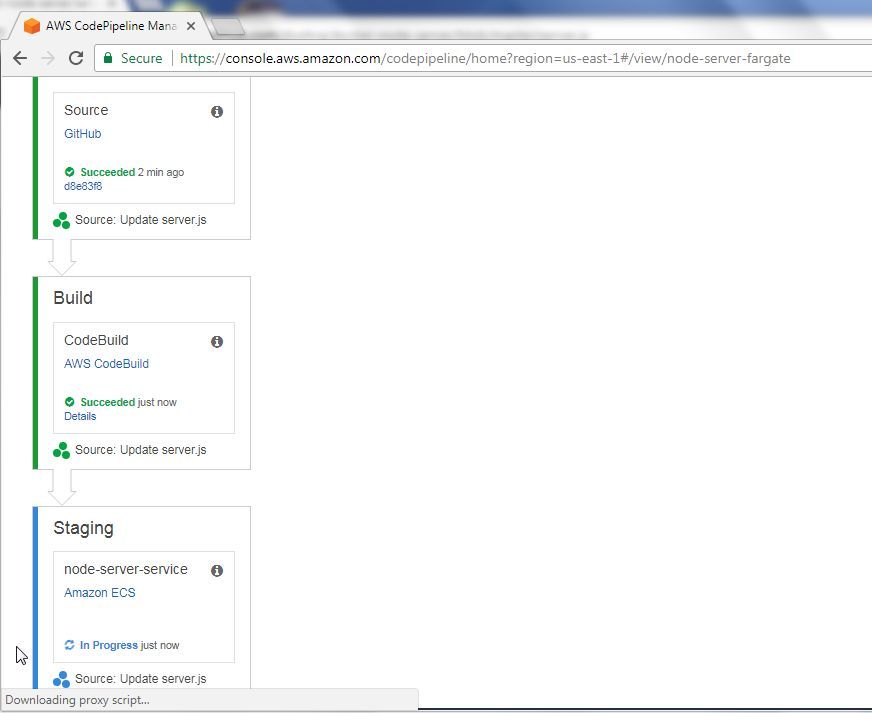 Docker just released a new Beta with built-in AWS deployment support. Let's check it out! Support this show on Patreon! It's the #1 way to support me intervi