How to Add and Remove Packages using NPM and Yarn 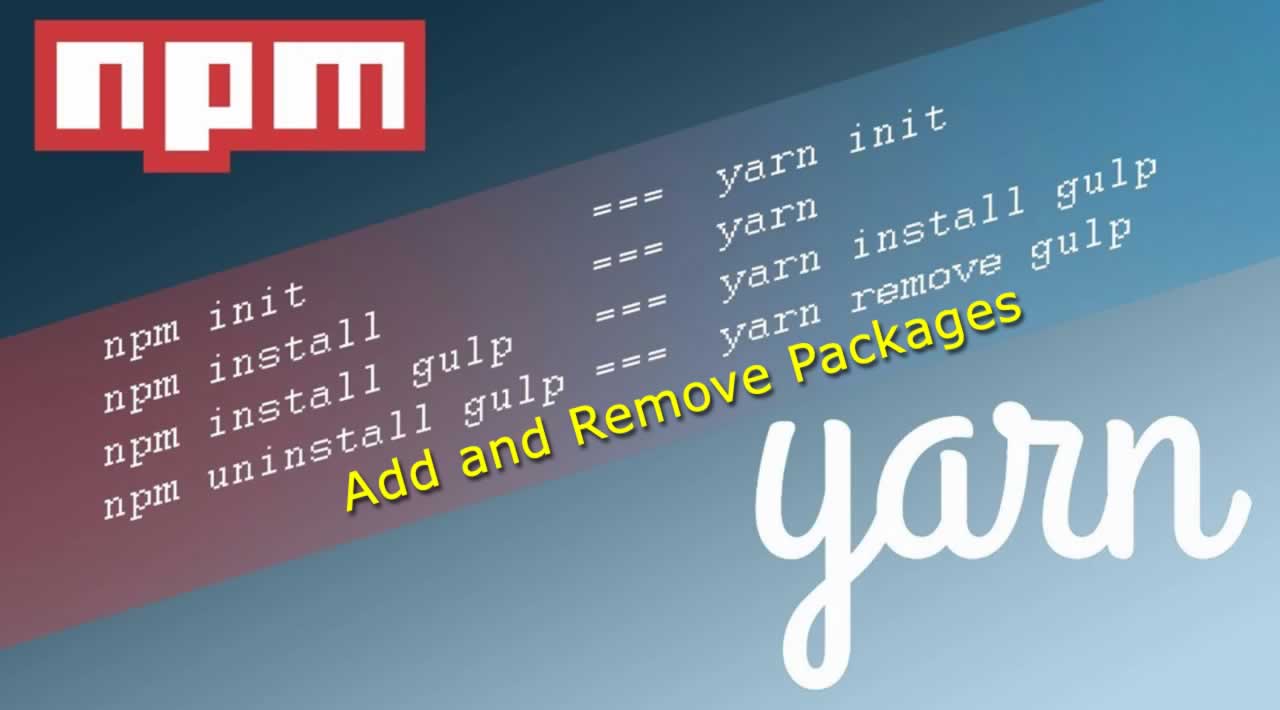 Learn how to add and remove packages globally and as project dependencies using npm and Yarn.

One of the beautiful things about both Open Source and the ecosystems of modern programming languages is that there’s a good chance the code you’re about to write has already been written.

There are a plethora of packages out there for Node.js and between you and me, they are usually written by folks smarter than myself that have thought through of a bunch of stuff I wouldn’t have even dreamed of. Standing on the shoulders of giants, as they say.

For this article, I’m going to discuss using both npm and yarn. If you’re an avid reader of our reptilian friendly site, you have probably seen both commands mentioned in our other Node.js articles.

For those new to the party, npm and yarn are package managers for Node.js. They both leverage the package.json file for your projects and function quite similarly.

I’m not here to start a flame war about which is better, but I do favor npm due to it’s ubiquity.

If you already have Node.js installed locally, you probably have npm installed. If you’d prefer to follow along using yarn, you can check out their installation instructions here.

Depending on your system, you could also consult with your friendly neighborhood package manager and install things that way.

Also, we’re going to be installing things globally as well as to a project as a dependency. You could very well use an existing project of yours, or you could create a dummy project out in your /tmp directory as such:

This creates a package.json file that we will be adding and removing packages from.

Adding a Development Dependency to a Project

Not all dependencies are created equal, as some are only required while doing development. These dependencies, while important, can slow down production deployments since they take time to install and the code will never be touched.

Adding a Production Dependency to a Project

Other dependencies are mission critical to the application and should always be installed regardless if it’s a development environment or not. We call these production dependencies and tend to includes packages like express or react.

Adding a production dependency to a project is just as easy as adding a development one, but it will be added to the dependencies section of our package.json instead:

Removing a Dependency From a Project

In every project’s life, there comes a time when a dependency that once seemed like a good idea, no longer serves any purpose. Don’t be too sad, deleting code is always a good thing (assuming you have proper test cover to ensure you didn’t break anything).

To remove either a development or production dependency from a project, we simply uninstall or remove it:

This will remove things from node_modules as well as drop the dependency from our package.json. Depending on your version of either command, you may also see updates to your lock file.

Removing a globally installed package is the same as removing one from a project, but we need to pass in the global argument as we did when installing it: