How to Organize and decouple API calls in Nuxt.js 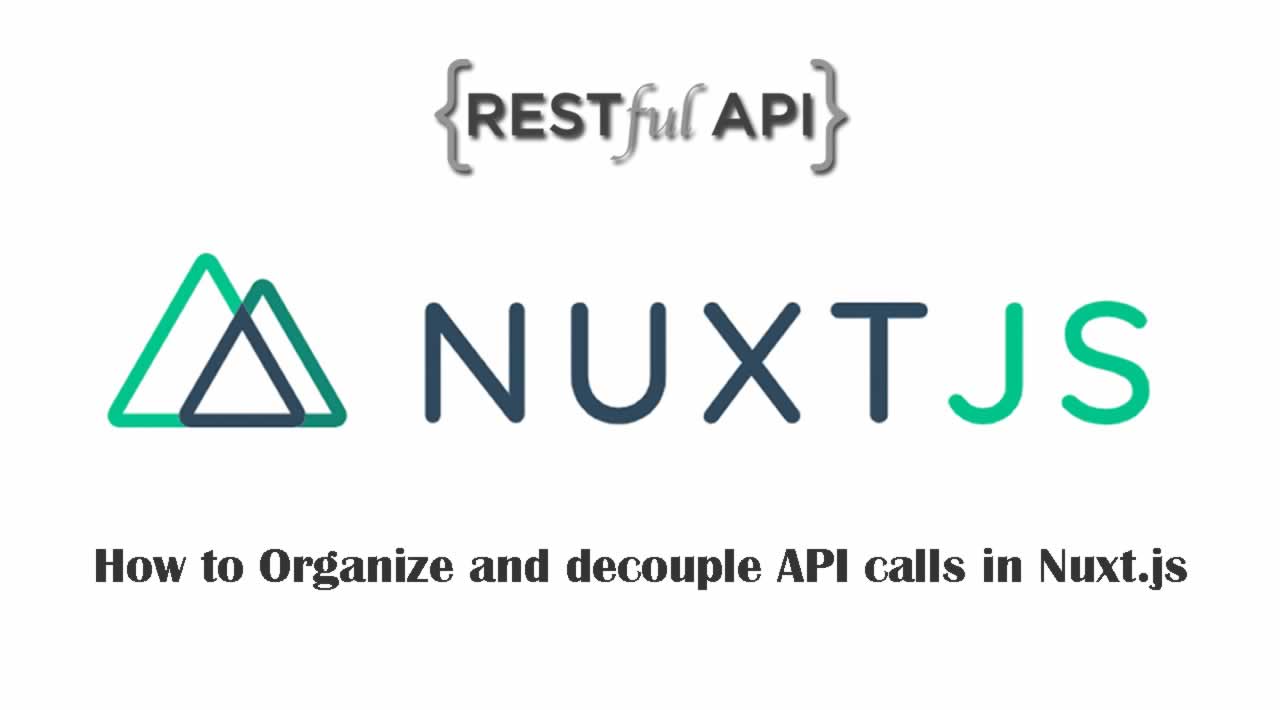 As your Nuxt app grows, so does your backend. With time, your API evolves from a hand full of endpoints into an enormous jungle of resources.

As your Nuxt app grows, so does your backend. With time, your API evolves from a hand full of endpoints into an enormous jungle of resources. And you want to stay the king of the jungle! That means not losing track of the different (RESTful) endpoints and organizing them properly. Imagine you want to rename a resource called images to photos. Nothing could be worse than doing a find and replace and using all your brainpower to not miss a call and avoid renaming other variables by accident. Or think about when you’d have to add another header for your Authentication.

So, a decent organization of your API calls in your frontend is necessary to stay sane. But how do we do that with Nuxt?

The two sides of the Nuxt

With Nuxt it seems to be bit more complicated to properly organize your API requests because you have to think about the server side in addition to the client side. You will probably retrieve data from your backend in asyncData or fetch methods, in the Vuex store or simply inside a Vue component. That means, our solution has to be accessible in all these contexts

If you are not using the official Nuxt axios module by now, you should really switch over soon (read: now). Instead of importing axios everywhere, the module provides you a convenient interface on the client-side (this.$axios in Vue components), in the Nuxt context (ctx.$axios) that is available in functions like asyncData and fetch and in the Vuex store (this.$axios again but not in arrow functions!). Furthermore, you can set up default headers, a baseURL depending on your environment and if necessary you can tweak your axios instance even more. Plus, you have a shorthand function for all HTTP verbs (eg. $get) which lets you omit the nested data key and delivers the response object on the top level.

But is that it? Of course not! We found a way to centralize our configuration but that’s just one part of the puzzle.

Now the interesting part begins. For further context, a RESTful API will be assumed. The techniques in the following paragraphs will work for most of the APIs though but have to be adapted slightly.

For our example, we will use parts of the JSONPlaceholder API as it covers all HTTP verbs and is not too complex.

Let’s take a look at the posts resource. What you basically want to do with it is:

If we consider other resources, for example users, the pattern will repeat:

With this knowledge, we can try to abstract our API with a Plain Old Javascript Object (POJO) by creating a method for each verb. A class would be fine as well.

The design pattern we borrow us here is called Repository Pattern.

Let’s save this file to ~/api/repository.js.

Okay, so we have a basic scaffold for our API abstraction though we still have to fill the methods somehow. Now the $axios from the Nuxt axios module comes in handy. But… how can we add it to an external module? Trying to access this.$axios will fail.

Dependency Injection to the rescue

Another term crosses our way: Dependency Injection. It’s a very common pattern in object oriented languages like PHP or Java and will help us in our situation as well.

If you are depending on a library like axios you usually would import and use it like this:

This is fine for many use-cases, but for that one, the approach comes with several disadvantages:

While the former isn’t a huge issue in our case, the latter poses a problem for us. We know the dependency but we can’t actually import it.

Instead, we inject the dependency which simply means we pass it as a parameter in a function (or to the constructor if you are using a class).

Boom, dependency injected! Let’s fill out our original scaffold and make use of the $axios shorthands:

Okay, so far so good. Currently, the posts resource is still hardcoded into our methods. To increase the reusability we want to pass in the resource URL dynamically again.

Instead of adding a second parameter to our default export we will transform the function to a higher order function (which is just a function that returns a function):

Now when we import our function somewhere, we can reuse it for many resources, but we only need to pass in the axios instance once:

With this pattern, you don’t have to pass in the options again and again.

Leverage the power of Nuxt.js plugins

There we go. We have abstracted our API resources successfully and found a way to re-use that abstraction properly, but two problems are still unsolved.:

To solve both problems at once we utilize a Nuxt.js plugin. They are mostly used to add global Vue components or libraries but of course, plugins can be utilized in many more ways. Also, they are evaluated before creating the root Vue instance.

If the plugin has a default export function, two parameters will be passed to that function: The Nuxt context and a method called inject.

Inside the function, we have everything we need to make our API repositories available across all relevant parts of our Nuxt app and to pass the axios instance to our construct.

Passing in the axios instance

Because the context is available in the plugin default export method, we can pass in the axios instance without any problems:

Now the last (and mightiest) step has to be taken. Make the implementation available across our app so it can be used in components, asyncData and so on. The good thing is, we don’t have to implement this on our own. It will be handled completely by the inject method which is provided as the second argument to the plugin function:

inject takes a name (used as key with `<div class="md:px-8 md:mt-12 pb-12 post" prefix) as the first argument and the value of that key as the second argument, which can be a primitive, an object or a function.

We’ve completed our whole setup, so the only thing left is to actually use it. Make sure to check out the Vue API query plugin by Robson Tenório which provides an advanced query builder for your API. That package can definitely save you some work!

Another highlight is the yamlful module by Jonas Galvez, another Nuxt team member! Definitely check it out ;)

Using an API repository to organize your calls is a mighty tool to keep track of your endpoints, call them uniformly, reduce duplicate code and also to have an easier time debugging or changing them!

Have you learned something by reading this post? Awesome, then I’ve reached my goal Also, please spread the word if you liked the article!

A step by step guide on how to migrate a Vue.js component from the traditional Object API to the modern Composition API, easy and in a cheatsheet format. The idea is to give you some tips related to new features you can find on Vue.js 3 as they get available. For now, we'll focus on Composition API, one of the most game-changing features!

Create a i18n Plugin with Composition API in Vue.js 3

A example on how to use the inject and provide functions to create a i18n plugin using Composition API in Vue.js 3. The way plugins are coded in Vue.js 3 with Composition API differ from traditional plugins. Traditional are used via a install function and added using Vue.use(plugin). They usually manipulate/extend the Vue prototype.

Quick tip on how to access the old this.$refs by using ref() in the new Composition API in Vue.js 3 components. You've seen in the last tip "Use old instance properties in Composition API in Vue.js 3" how to access instance properties in the new syntax. However, our beloved this.$refs wasn't included in the setup context object as you realized if you read the tip.