Simpliv LLC, a platform for learning and teaching online courses. We basically focus on online learning which helps to learn business concepts, software technology to develop personal and professional goals through video library by recognized industry experts and trainers.

Unity is one of the exciting and popular game engine that is used to create stunning games in the game industry. If you're interested to gain the skills to develop interesting 2D games with this powerful engine, then go for this Learning Path.

Packt’s Video Learning Paths are a series of individual video products put together in a logical and stepwise manner such that each video builds on the skills learned in the video before it.

The highlights of this Learning Path are:

Gain a strong hands-on experience in 2D game development
Learn to publish games on the Web and various mobile devices
Let’s take a quick look at your learning journey. To start with, you will be introduced to 2D game development. The Learning Path describes the process of setting up a project in 2D mode, covers the use of 2D sprites, discusses ways to access 2D objects through code, and explains the basics of the User Interface. You will then build your first game, a “text adventure game” and you will then go on to create an example of this with the various elements.

After making a text adventure game, you will go back to the challenges and use them to improve the game and your 2D game development skills.

Moving ahead you'll understand how to build your initial code structure, and from there, create controllers for your player and the camera. You'll then add in weapons and learn how to keep track of enemy kills, after which, you'll create game-play by scripting in C#. Finally, you'll create the visuals and publish the game to multiple platforms

By the end of this Learning Path, you will have a basic 2D game as well as a reusable game framework and an editor extension to expedite the creation of the 2D game you make.

Dr. Ashley Godbold is a programmer, game designer, artist, mathematician, and teacher. She holds a Bachelor of Science in Mathematics, a Master of Science in Mathematics, a Bachelor of Science in Game Art and Design, and a Doctor of Computer Science in Emerging Media where her dissertation research focused on educational video game design. She works full-time as a game developer and also runs a small indie/passion studio. She teaches college courses in Unity, 3ds Max, Adobe Flash, game design, and mathematics. She is also the author of Mastering Unity 2D Game Development, Second Edition by Packt Publishing.
Ethan Casner creates both single-player and Massively-Multiplayer Online Role-Playing Games (MMORPGs) with the Unity Engine. He has created games written in the industry standard C# programming language and runs an independent consultation and development studio called Stained Glass Llama, which is officially sponsored by Microsoft. Working alongside Exit Games (Photon), Ethan and SGL succeeded in creating the largest Unity-based multiplayer networking system to date. He also submitted his own game based on its software to Valve Corporation (the world's largest digital distributor of PC and console games) in its Greenlight program and it won the #1 spot in the world out of over 1,700 submissions.
To continue:

This is the most comprehensive course on Unity 3d on the Internet. We are avid game developers and were tired of all the junk out there - teaching students how to make 3D cubes without real world game development.

This Unity course is for absolute beginners & for seasoned programmers!

This course will take you down a guided learning path. You'll learn to code in C# and then go on to build 2D & 3D games.

Not only will you build games, but you will learn how to do it the way the pros do. We'll even cover advanced topics like lighting, cinematics, and multiplayer.

Here are some of the things you will learn:

And don't forget about our FREE chatroom where you can get live help, interact with the community, and find people to start your own game studio.

Now is the time to learn how to code and build Unity 3d games the Devslopes way!

How to Create a 2D Card Game in Unity 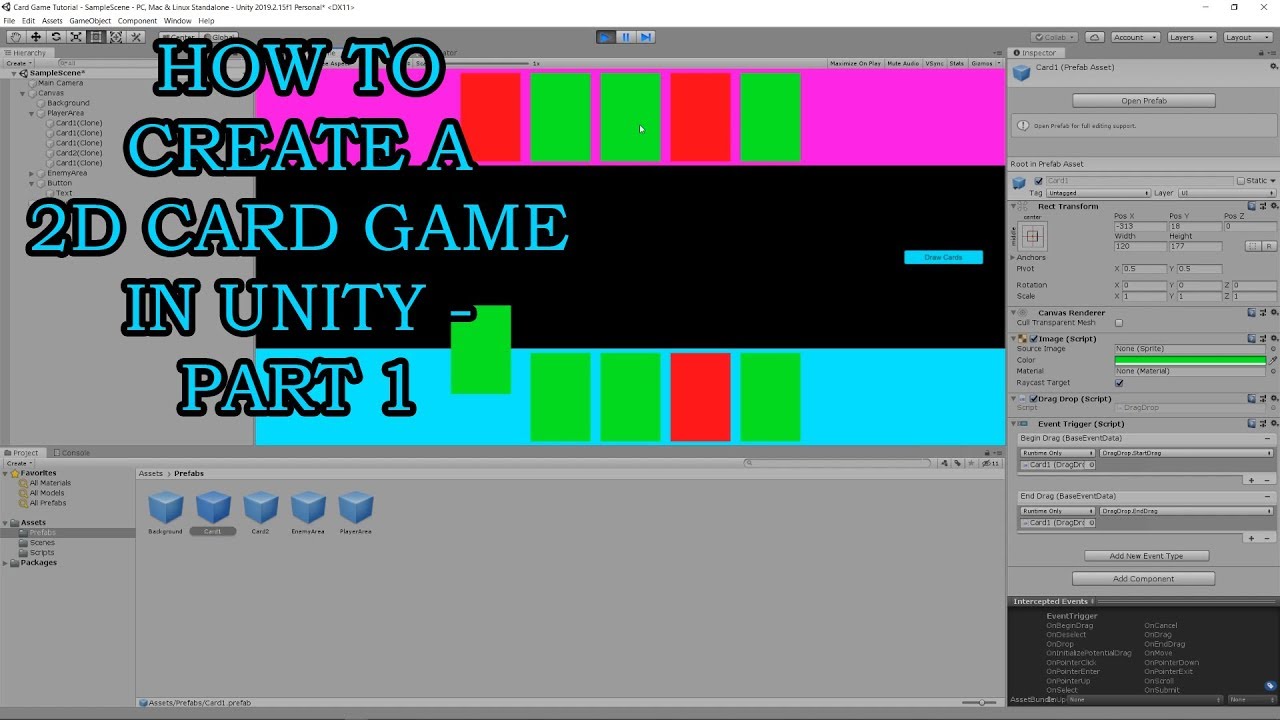 Learn how to create a 2D card game in Unity with randomized decks and draggable/droppable cards using the canvas, C# scripting, prefabs, and more!

Learn how to create a 2D card game in Unity with randomized decks and draggable/droppable cards using the canvas, C# scripting, prefabs, and more!

Check out my books and games: https://www.nightpathpub.com/

Learn how to develop Unity Games for Windows using C# and Unity, and see why Unity is the tool of choice for millions of game developers around the world. Explore the interface, 2D and 3D game development, publishing for Windows, and monetizing your games. Find out how Unity helps you animate events, use environmental controls, add finishing touches for a more polished game, and more. Don't miss it!