How to Use Docker-Compose to Containerize a Nodejs, Express & Mongodb

In this video we will learn how to use docker-compose to containerize a Nodejs ,express with MongoDB as a database. thank you very much for the tutorial, I followed all the steps and it works, but I had just one problem, when I run docker compose, I got an error with mongo credentials, so I had to comment from line 5 to line 8 in initDB.js, then it works perfectly. TY

Setting up NodeJS with MongoDB using Docker and Docker Compose

Learn about Docker and how to spin up a Docker orchestration for your development environment so, that way, you don’t have to install MongoDB, you can just run your NodeJS application and connect directly to a MongoDB instance that’s running within the Docker orchestration. Why should you care about Docker?

Docker is simply one of the most important technologies at the moment. It lets you run apps inside containers that are mostly isolated from “everything”.

Each container is like an individual virtual machine stripped out of everything that is not needed to run your app. This makes containers very light, fast and secure.

Containers are also meant to be disposable. If one goes rogue, you can kill it and make another just like it with no effort thanks to the container images system.

Another thing that makes Docker great is that the app inside containers will run the same in every system (Windows, Mac, or Linux). This is awesome if you are developing in your machine and then you want to deploy it to some cloud provider like GCP or AWS.

Containerizing your app with Docker is as simple as creating a Dockerfile for each of your apps to first build an image, and then running each image to get your containers live.

To build our Client image you will be needing a Dockerfile. Let’s create one:

This will instruct docker to build an image (using these configurations) for our Client. You can read all about Dokerfile here.

To build our API image you will be needing another Dockerfile. Let’s create it:

This will instruct docker to build an image (using these configurations) for our API. You can read all about Dokerfile here.

You could run each individual container using the Dokerfiles. In our case we have 3 containers to manage, so we will use docker-compose instead. Compose is a tool for defining and running multi-container Docker applications.

Let me show you how simple it is to use it:

What sorcery is that?

You should read all about docker-compose here.

Keep in mind that there are many ways of writing a docker-compose.yml file. You should explore the documentation and use what better suits your needs.##

To add a MongoDB database is as simple as adding these lines of code to your docker-compose.yml file:

This will create a container using the official MongoDB image.

Create a shared network for your containers

To create a shared network for your container just add the following code to your docker-compose.yml file:

Notice that you already defined each container of your app to use this network.

In the end, your docker-compose.yml file should be something like this: 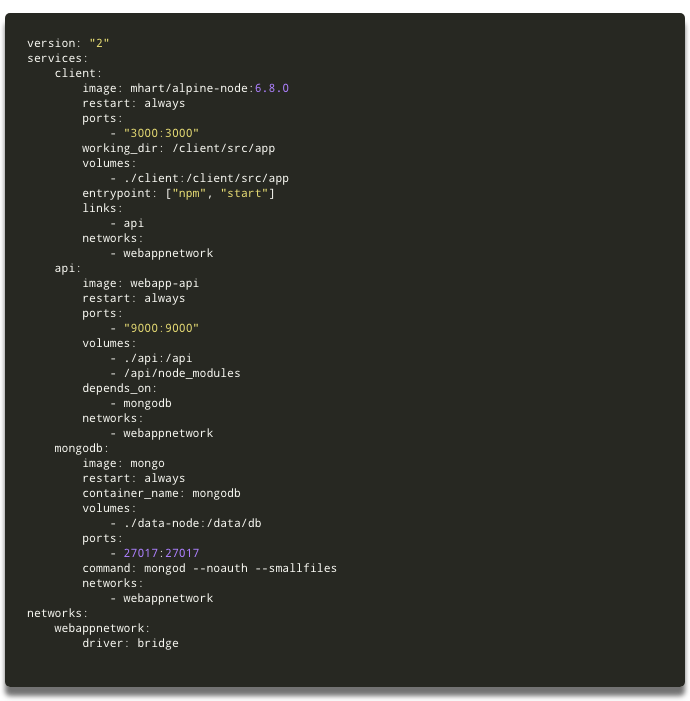 In the docker-compose.yml file, the indentation matters. Be aware of that.

Get your containers running

2. Now, to make Docker spin up the containers, just run:

And… just like magic, you now have your Client, your API, and your Database, all running in separated containers with only one command. How cool is that?

Connect your API to MongoDB

Now create a file called testDB.js on your API routes folder and insert this code:

Ok, let’s see what this code is doing. First, I import Express, ExpressRouter, and Mongoose to be used on our /testDB route. Then I create a variable that will be sent as a response telling what happened with the request. Then I connect to the database using Mongoose.connect(). Then I check if the connection is working or not, and change the variable (I’ve created earlier) accordingly. Finally, I use module.exports to export this route so that I’m able to use it on app.js file.

2. Now you have to “tell” Express to use that route you’ve just created. On your API folder, open the app.js file and insert this two lines of code:

This will “tell” Express that every time there is a request to the endpoint /testDB, it should use the instructions on the file testDB.js.

3. Now let’s test if everything is working properly. Go to your terminal and press control + C to bring your containers down. Then run docker-compose up to bring them back up again. After everything is up and running, if you navigate to http://localhost:9000/testDB you should see the message Connected to Database.

In the end, your app.js file should look like this: 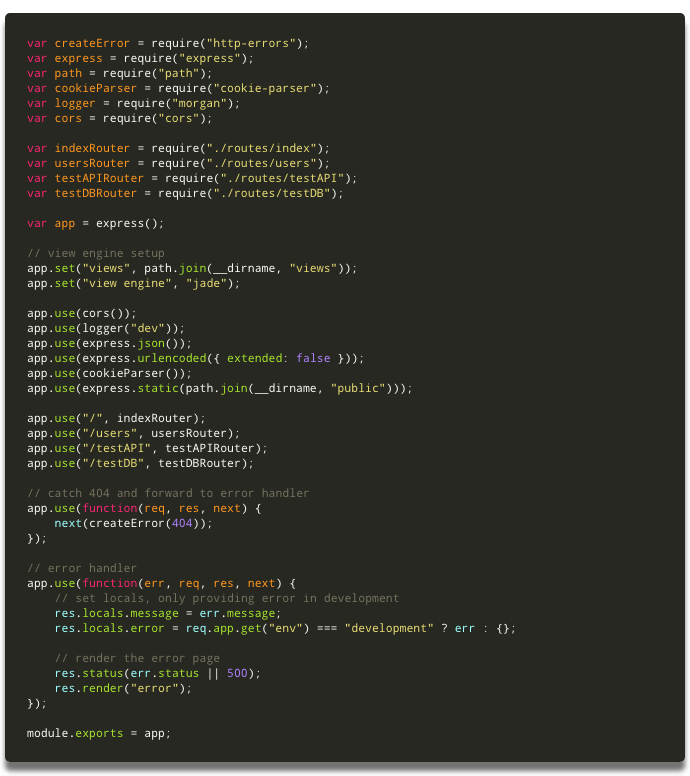 Yep… it means the API is now connected to the database. But your FrontEnd doesn’t know yet. Let’s work on that now.

Make a request from React to the Database

To check if the React app can reach the Database let’s make a simple request to the endpoint you defined on the previous step.

This method will fetch the endpoint you defined earlier on the API and retrieve the response. Then it will store the response in the state of the component

3. Add a variable to the state of the component to store the response:

4. Inside the lifecycle method **componentDidMount(), **insert this code to execute the method you’ve just created when the component mounts:

5. Finally, add another <;p> tag after the one you already have to display the response from the Database:

In the end, your App.js file should end up like this: 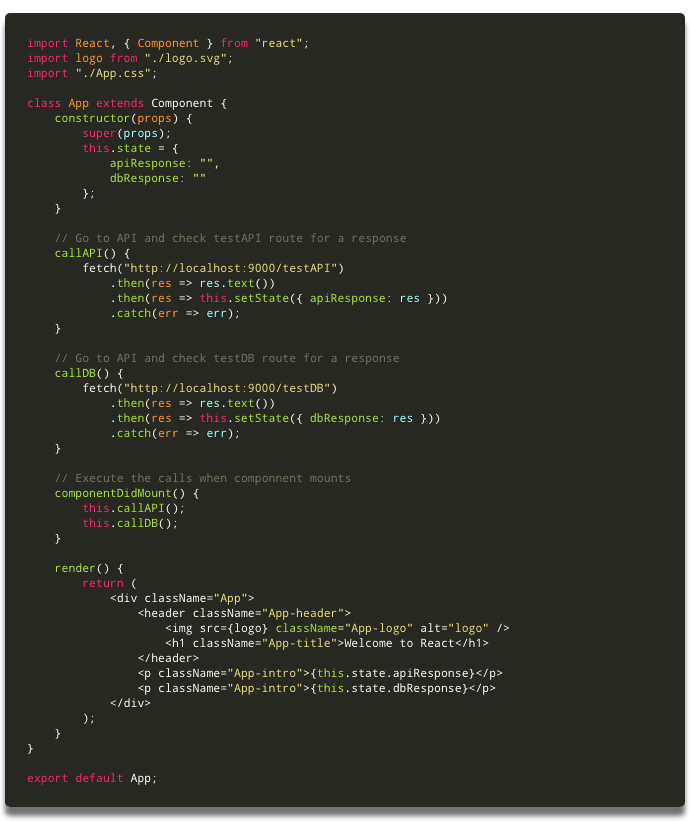 Finally, let’s see if everything is working

On your browser, go to http://localhost:3000/ and if everything is working properly, you should see these three messages :

You now have a full stack app with a React FrontEnd, a Node/Express API and a MongoDB database. All running inside individual Docker containers that are orchestrated with a simple docker-compose file.

This app can be used as a boilerplate to build your more robust app.

You can find all the code I wrote in the project repository.