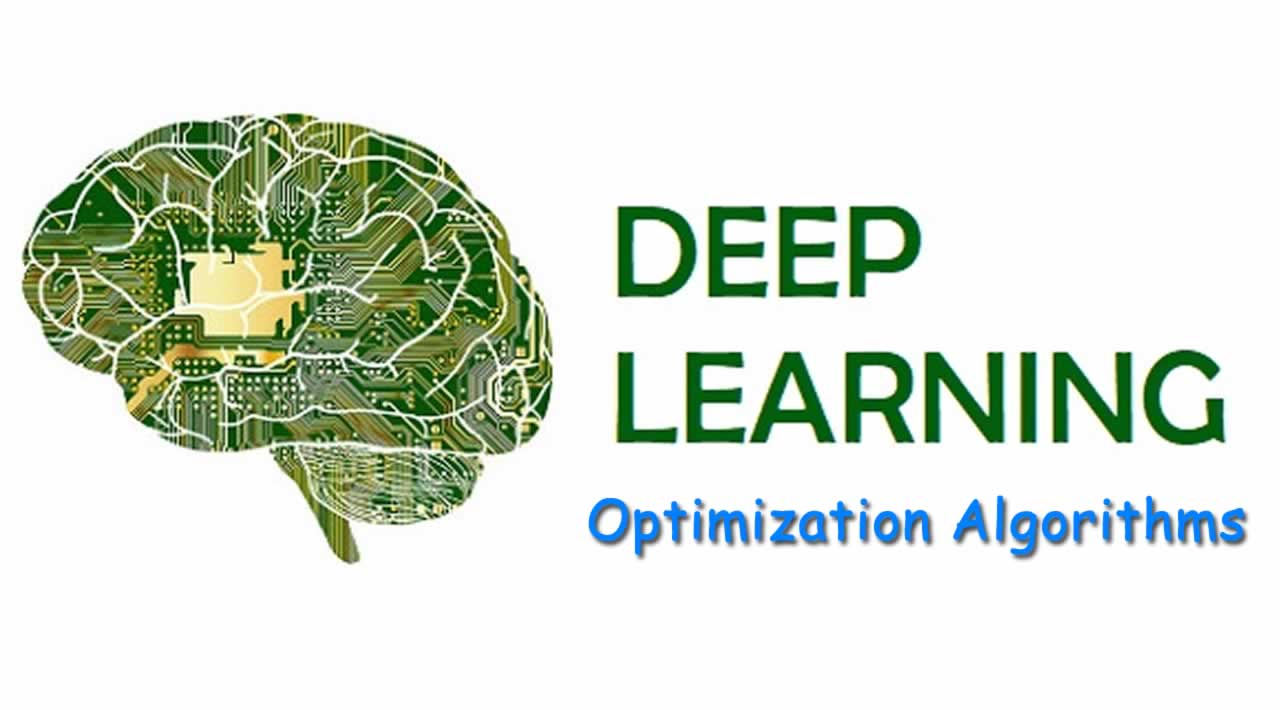 In this article, I will present to you the most sophisticated optimization algorithms in Deep Learning that allow neural networks to learn faster and achieve better performance. These algorithms are Stochastic Gradient Descent with Momentum...

In this article, I will present to you the most sophisticated optimization algorithms in Deep Learning that allow neural networks to learn faster and achieve better performance.

These algorithms are Stochastic Gradient Descent with Momentum, AdaGrad, RMSProp, and Adam Optimizer.

1. Why do we need better optimization Algorithms?

To train a neural network model, we must define a loss function in order to measure the difference between our model predictions and the label that we want to predict. What we are looking for is a certain set of weights, with which the neural network can make an accurate prediction, which automatically leads to a lower value of the loss function.

I think you must know by now, that the mathematical method behind it is called gradient descent.

By periodically applying the gradient descent to the weights, we will eventually arrive at the optimal weights that minimize the loss function and allow the neural network to make better predictions.

So far the theory.

Do not get me wrong, gradient descent is still a powerful technique. In practice, however, this technique may encounter certain problems during training that can slow down the learning process or, in the worst case, even prevent the algorithm from finding the optimal weights

A gradient near zero does not improve the weight parameters and prevents the entire learning process.

On the other hand, even if we have gradients that are not close to zero, the values of these gradients calculated for different data samples from the training set may vary in value and direction. We say that the gradients are noisy or have a lot of variances. This leads to a zigzag movement towards the optimal weights and can make learning much slower:

In the following article, we are going to learn about more sophisticated gradient descent algorithms. All of these algorithms are based on the regular gradient descent optimization that we have come to know so far. But we can extend this regular approach for the weight optimization by some mathematical tricks to build even more effective optimization algorithms that allow our neural network to adequately handle these problems, thereby learning faster and to achieve a better performance

The first of the sophisticated algorithms I want to present you is called stochastic gradient descent with momentum.

Intuitively speaking, by adding this momentum term we let our gradient to build up a kind of velocity v during training. The velocity is the running sum of gradients weighted by ρ.

ρ can be considered as friction that slows down the velocity a little bit. In general, you can see that the velocity builds up over time. By using the momentum term saddle points and local minima become less dangerous for the gradient. Because step sizes towards the global minimum now don’t depend only on the gradient of the loss function at the current point, but also on the velocity that has built up over time.

In other words, we are moving more towards the direction of velocity than towards the gradient at a certain point.

If you want to have a physical representation of the stochastic gradient descent with momentum think about a ball that rolls down a hill and builds up velocity over time. If this ball reaches some obstacles on its way, such as a hole or a flat ground with no downward slope, the velocity v would give the ball enough power to roll over these obstacles. In this case, the flat ground and the hole represent saddle points or local minima of a loss function.

In the following video (Fig. 4), I want to show you a direct comparison of regular stochastic gradient descent and stochastic gradient descent with momentum term. Both algorithms are trying to reach the global minimum of the loss function which lives in a 3D space. Please note how the momentum term makes the gradients to have less variance and fewer zig-zags movements.

Fig. 4 SGD vs. SGD with Momentum

When we update a weight parameter, we divide the current gradient by the root of that term g. To explain the intuition behind AdaGrad, imagine a loss function in a two-dimensional space in which the gradient of the loss function in one direction is very small and very high in the other direction.

Summing up the gradients along the axis where the gradients are small causes the squared sum of these gradients to become even smaller. If during the update step, we divide the current gradient by a very small sum of squared gradients g, the result of that division becomes very high and vice versa for the other axis with high gradient values.

As a result, we force the algorithm to make updates in any direction with the same proportions.

However, there is a problem with this optimization algorithm. Imagine what would happen to the sum of the squared gradients when training takes a long time. Over time, this term would get bigger. If the current gradient is divided by this large number, the update step for the weights becomes very small. It is as if we were using very low learning that becomes even lower the longer the training goes. In the worst case, we would get stuck with AdaGrad and the training would go on forever.

There is a slight variation of AdaGrad called RMSProp that addresses the problem that AdaGrad has. With RMSProp we still keep the running sum of squared gradients but instead of letting that sum grow continuously over the period of training we let that sum actually decay.

In RMSProp we multiply the sum of squared gradients by a decay rate α and add the current gradient weighted by (1- α). The update step in the case of RMSProp looks exactly the same as in AdaGrad where we divide the current gradient by the sum of squared gradients to have this nice property of accelerating the movement along the one dimension and slowing down the movement along the other dimension.

Let’s see how RMSProp is doing in comparison with SGD and SGD with momentum in finding the optimal weights.

Fig. 5 SGD vs. SGD with Momentum vs. RMS Prop

Although SGD with momentum is able to find the global minimum faster, this algorithm takes a much longer path, that could be dangerous. Because a longer path means more possible saddle points and local minima. RMSProp, on the other hand, goes straight towards the global minimum of the loss function without taking a detour.

So far we have used the moment term to build up the velocity of the gradient to update the weight parameter towards the direction of that velocity. In the case of AdaGrad and RMSProp, we used the sum of the squared gradients to scale the current gradient, so we could do weight updates with the same ratio in each dimension.

These two methods seemed pretty good ideas. Why do not we just take the best of both worlds and combine these ideas into a single algorithm?

This is the exact concept behind the final optimization algorithm called Adam, which I would like to introduce to you.

The main part of the algorithm consists of the following three equations. These equations may seem overwhelming at first, but if you look closely, you’ll see some familiarity with previous optimization algorithms.

The first equation looks a bit like the SGD with momentum. In the case, the term would be the velocity and the friction term. In the case of Adam, we call the first momentum and is just a hyperparameter.

The difference to SGD with momentum, however, is the factor (1- β1), which is multiplied with the current gradient.

The second part of the equations, on the other hand, can be regarded as RMSProp, in which we are keeping the running sum of squared gradients. Also, in this case, there is the factor (1-β2) which is multiplied with the squared gradient.

The term in the equation is called the second momentum and is also just a hyperparameter. The final update equation can be seen as a combination of RMSProp and SGD with Momentum.

So far, Adam has integrated the nice features of the two previous optimization algorithms, but here’s a little problem, and that’s the question of what happens in the beginning.

This first very large update step is not the result of the geometry of the problem, but it is an artifact of the fact that we have initialized the first and second momentum to zero. To solve the problems of large first update steps, Adam includes a correction clause:

As a result, the first update step of the neural network parameters does not get that large and we don’t mess up our training in the beginning. The additional bias corrections give us the full form of Adam Optimizer.

Now, let us compare all algorithms with each other in terms of finding the global minimum of the loss function:

Fig. 6 Comparison of all optimization algorithms.

6. What is the best Optimization Algorithm for Deep Learning?

Finally, we can discuss the question of what the best gradient descent algorithm is.

… this would be a very good starting point for any problem and virtually every type of neural network architecture I’ve ever worked with.

In this sense, I recommend that you always start with the Adam Optimizer, regardless of the architecture of the neural network of the problem domain you are dealing with.

Data Science, Machine Learning, Deep Learning, and Artificial intelligence are really hot at this moment and offering a lucrative career to programmers with high pay and exciting work.

That is why in this article, I want to share my 10 favorite data science resources (online ones), which I frequently use for learning and trying to