In this tutorial, we will learn how to generate HierarchyId with EF Core and SQL Server. ASP.NET Core Example. This is part 3 of “MS SQL Server- Zero to Hero” and in this article, we will be discussing about the SCHEMAS in SQL SERVER. Before getting into this article, please consider to visit previous articles in this series from below,

A glimpse of previous articles

In part one, we learned the basics of data, database, database management system, and types of DBMS and SQL.

How to Use SQL Server HierarchyID Through Easy Examples

Do you still hold on to the parent/child design, or would like to try something new, like SQL Server hierarchyID? Well, it is really new because hierarchyID has been a part of SQL Server since 2008. Of course, the novelty itself is not a persuasive argument. But note that Microsoft added this feature to represent one-to-many relationships with multiple levels in a better way.

You may wonder what difference it makes and which benefits you get from using hierarchyID instead of the usual parent/child relationships. If you never explored this option, it might be surprising for you.

The truth is, I didn’t explore this option since it was released. However, when I finally did it, I found it a great innovation. It is a better-looking code, but it has much more in it. In this article, we are going to find out about all those excellent opportunities.

However, before we dive into the peculiarities of using SQL Server hierarchyID, let’s clarify its meaning and scope.

What is SQL Server HierarchyID?

SQL Server hierarchyID is a built-in data type designed to represent trees, which are the most common type of hierarchical data. Each item in a tree is called a node. In a table format, it is a row with a column of hierarchyID data type. 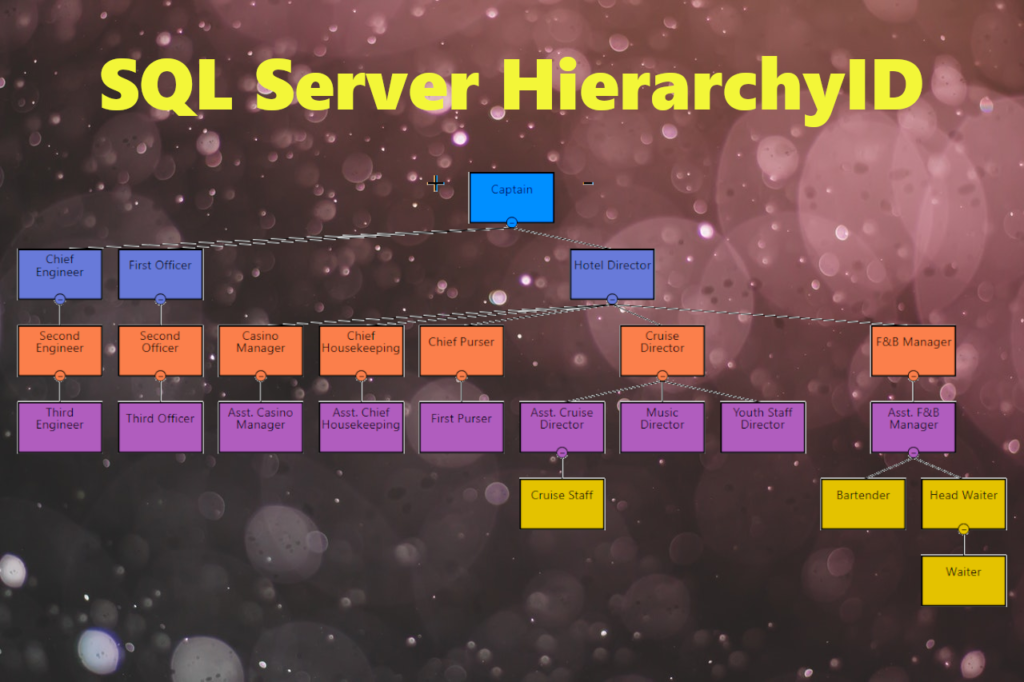 Usually, we demonstrate hierarchies using a table design. An ID column represents a node, and another column stands for the parent. With the SQL Server HierarchyID, we only need one column with a data type of hierarchyID.

When you query a table with a hierarchyID column, you see hexadecimal values. It is one of the visual images of a node. Another way is a string: 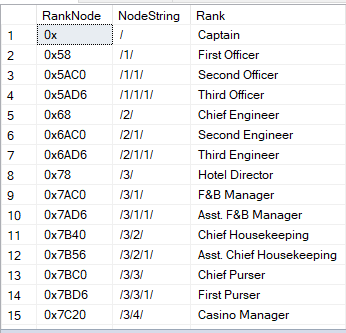 One of the available methods is IsDescendantOf. It returns 1 if the current node is a descendant of a hierarchyID value.

You can write code with this method similar to the one below:

Other methods used with hierarchyID are the following:

To ensure that queries for tables using hierarchyID run as fast as possible, you need to index the column. There are two indexing strategies:

In a depth-first index, the subtree rows are closer to each other. It suits queries like finding a department, its subunits, and employees. Another example is a manager and its employees stored closer together.

In a table, you can implement a depth-first index by creating a clustered index for the nodes. Further, we perform one of our examples, just like that.

Figure 2: Depth-first indexing strategy. The Chief Engineer subtree is highlighted in the org. chart and the result set. The list is sorted based on each subtree.

In a breadth-first index, the same level’s rows are closer together. It suits queries like finding all the manager’s directly reporting employees. If most of the queries are similar to this, create a clustered index based on (1) level and (2) node.

Figure 3: _Breadth-first indexing strategy. A portion of the second rank level is highlighted in the org. chart and the result set. The list is sorted based on the scale. _

It depends on your requirements if you need a depth-first index, a breadth-first, or both. You need to balance between the importance of the queries type and the DML statements you execute on the table.

Before we proceed, consider one more question. Looking at the result set with node strings, do you find the hierarchy visualizing hard for your eyes?

For me, it’s a big yes because I am not getting younger.

For this reason, we are going to use Power BI and Hierarchy Chart from Akvelon along with our database tables. They will help to display the hierarchy in an organizational chart. I hope it will make the job easier.

Now, let’s get down to business.

You can use HierarchyID with the following business scenarios:

Even if your business scenario is similar to the above, and you rarely query across the hierarchy sections, you don’t need hierarchyID.

For example, your organization processes payrolls for employees. Do you need to access the subtree to process someone’s payroll? Not at all. However, if you process commissions of people in a multi-level marketing system, it can be different.

Figure 4: Organizational structure of a typical cruise ship rendered using Power BI, Hierarchy Chart by Akvelon, and SQL Server. Names are made-up and do not relate to actual people and cruise ships.

Now you can visualize the hierarchy in question. We use the below tables throughout this post:

The table structure of each case is as follows: