A 47-page report by an independent lab finds that Voatz voting platform meets all US Election Assistance Commission (EAC) guidelines.

Controversial voting platform provider Voatz announced that an independent lab has determined that its platform meets all federal voting system guidelines as set by the US Election Assistance Commission. A 5-month period of testing in multiple areas including security, source code, and system integration resulted in a 47-page report by Pro V&V, which said Voatz remote accessible ballot delivery, marking, and return system used blockchain-based infrastructure throughout the process. The testing also analyzed the use of the mobile app of smartphone accessibility tools such as screen readers, voice control, and language capabilities. 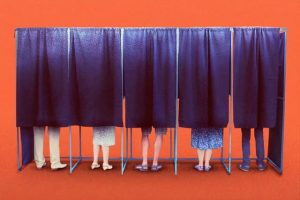 A 47-page report by an independent lab finds that Voatz voting platform meets all US Election Assistance Commission (EAC) guidelines.

Controversial voting platform provider Voatz announced that an independent lab has determined that its platform meets all federal voting system guidelines as set by the US Election Assistance Commission. A 5-month period of testing in multiple areas including security, source code, and system integration resulted in a 47-page report by Pro V&V, which said Voatz remote accessible ballot delivery, marking, and return system used blockchain-based infrastructure throughout the process. The testing also analyzed the use of the mobile app of smartphone accessibility tools such as screen readers, voice control, and language capabilities.

Cryptocurrency is a digital medium of exchange that uses encryption to send and receive money. The most frequently utilised cryptocurrency for which Blockchain technology was created is Bitcoin. Despite the fact that Blockchain has been the standard cryptocurrency technology for the past few years, concerns about speed and scalability have led to the creation of other solutions.

Tangle is a relatively young cryptocurrency. In this essay, we’ll look at the latest dispute between Tangle and Blockchain to see which is the better option.

What is Blockchain?
Blockchain is a transaction ledger that is cryptographically secure. Bitcoin, Litecoin, and Ethereum, as well as other cryptocurrencies, are all accepted. The ledger is made up of transaction blocks that are cryptographically connected to each other. Each block is linked to the previous one, preserving the ledger’s whole history.

All of the machines involved in these transactions are known as nodes. Each node authenticates transactions independently. This means that after both nodes have confirmed a transaction, it can proceed.

Want to learn more about Blockchain Technology? Blockchain certification courses could be the best to get started with.

What is Tangle?
Tangle is a bitcoin transaction technology that works in a similar fashion to Blockchain. Here, a directed acyclic graph (DAG) is used, which is similar to a distributed ledger. DAG is not governed by any external entity, such as a bank or a financial organisation.

Tangle is IoT-friendly, which is the cherry on top (Internet of Things). The Internet of Things (IoT) is a network of interconnected devices that can exchange data and communicate with each other. Tangle will be able to conduct large-scale transactions between multiple linked devices swiftly and seamlessly as a result of this.

What are the differences between a tangle and a blockchain?

Structure — A blockchain is made up of a lengthy, ever-growing chain of nodes, or data blocks, each one linked to the one before it. A tangle, on the other hand, is made up of data nodes that all flow in the same direction. And, unlike blockchain, which may technically loop back on itself in a circular pattern, the tangle can only go in one direction at a time and cannot reverse. This enables speedier data transport.

Security – Due to its arduous block-formation process, which involves the solution of a mathematical problem and verification through group consensus, blockchain has a higher level of security. Before a device can complete its own transaction and thus create a data node, it must first validate two previous transactions. The tangle is less secure than blockchain due to this less robust procedure.

Decentralization — Both blockchain and the tangle are decentralised systems, which means they are free of outside meddling and the fees and hurdles that come with it. The tangle, however, has had to erect a safety net, which it refers to as a “coordinator node.” This node effectively puts a centralising aspect into the tangle’s structure, putting to rest claims that it allows for entirely independent, uninterrupted transactions between IoT units.

In this case, blockchain has a clear advantage. It’s significantly more secure than Tangle and supports decentralised apps. Blockchain is becoming more popular among businesses and users for cryptocurrency transactions.

Tangle is still in its infancy and has faults. The technique can’t be labelled truly decentralised because it relies on a central coordinator node. This node checks that transactions are genuine, however Tangle data is not entirely self-contained in this regard. Because the node addition protocol is less precise than Blockchain, it is also less secure.

Top 5 Blockchain Platforms to watch for in 2021

Blockchain is a distributed ledger technology that provides a decentralized platform where information exchange occurs without third-party intervention. When we talk about Blockchain platforms, you would have noticed that there are different platforms, some of which are public, while others are permissioned. The latter is the area of interest for most of the banking institutions in the present scenario. There is a growing talk about permissioned Blockchain platforms because they are highly secure, and it has its members authorizing the exchange.

These platforms allow the Blockchain development based applications and some of the interesting ones include Ethereum, Hyperledger, Corda, R3 and EOS. These are only a handful of names, while there are many others in the making and others are in use. If you are still wondering why you need to invest in Blockchain platforms, then you have to take into account the benefits that these platforms offer:

Top 5 platforms that you should be looking forward to:

Stellar: This is a distributed ledger platform that allows the exchange of assets. It allows exchange between fiat currencies and cryptocurrencies. This platform can be used for smart devices, mobile wallets and banking tools.

Tezos: The next in our list is Tezos which is linked to digital token Tozzi. However, you must know that this platform is not based on the mining of Tez. The users are rewards for participating in the proof-of-stake consensus mechanism.

Hyperledger fabric: This is a popular name, and was developed by Linux Foundation. It is a permissioned Blockchain platform that aims at providing an enterprise-level solution.

Hyperledger Sawtooth: This platform was launched by Linux and contributed by IBM and digital assets. It offers an enterprise-level solution. This platform has been created to execute distributed ledgers, which helps maintain digital records without any central governing authority.

Ripple: It came into existence in 2012. This platform has been developed to connect different payment providers, banks and digital asset exchanges via the Blockchain network. The global payments take place via XRP or Ripple.

This is built on advanced Blockchain technology, and Ripple is faster and more scalable than other Blockchain.

These are some of the popular Blockchain platforms that have garnered a lot of attention from the investors and companies.