Instrument your Python applications with Datadog and OpenTelemetry 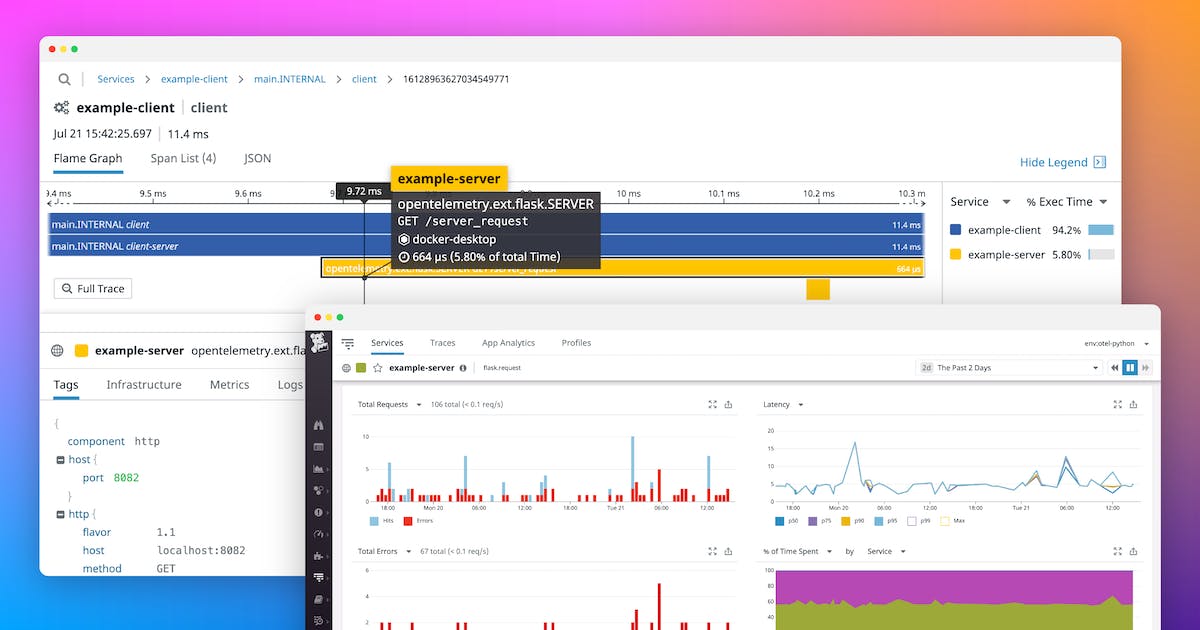 Learn how to instrument your Python applications with Datadog's exporter for OpenTelemetry. If you are familiar with OpenTracing and OpenCensus, then you have probably already heard of the OpenTelemetry project.

If you are familiar with OpenTracing and OpenCensus, then you have probably already heard of the OpenTelemetry project. OpenTelemetry merges the OpenTracing and OpenCensus projects to provide a standard collection of APIs, libraries, and other tools to capture distributed request traces and metrics from applications and easily export them to third-party monitoring platforms. At Datadog, we’re proud to be supporters of the project, and we’re building on that to provide out-of-the-box instrumentation for your applications using OpenTelemetry’s suite of tools and our existing tracing libraries.

As part of this ongoing work, we’re excited to announce a new Python exporter for sending traces from your instrumented Python applications to Datadog, with support for exporting metrics coming soon. OpenTelemetry exporters are libraries that transform and send data to one or more destinations. The Datadog exporter enables you to integrate the OpenTelemetry tracing library into your application and seamlessly connect to other applications already instrumented with either OpenTelemetry and Datadog libraries.

In this guide, we’ll show how to instrument an application with OpenTelemetry as well as how to plug in Datadog’s new Python exporter and start collecting data.

Instrumenting a Python application with OpenTelemetry

We’ll first take a look at a basic Python application that is already instrumented with OpenTelemetry.

The application imports modules from the OpenTelemetry API and SDK packages. The API package provides the necessary interfaces for instrumentation such as the TracerProvider, Tracer, and Span classes. With the OpenTelemetry API, developers can ship instrumented code or libraries and allow their users to easily plug in their preferred vendor backend using the OpenTelemetry SDK. The SDK package is an implementation of the API and provides the functionality for creating and exporting traces and spans. For example, the above application uses the SimpleExportSpanProcessor, which receives trace spans and sends them directly to the ConsoleSpanExporter exporter, which shows span information in your console’s output.

As part of it’s specification, OpenTelemetry requires both a tracer and span processor for instrumentation. The application sets the current global tracer provider with the opentelemetry.trace.set_tracer_provider and then adds the span processor to that tracer provider with trace.get_tracer_provider().add_span_processor. Finally, it uses tracer.start_as_current_span to create three spans.

Running the above application would show a JSON output in your console of a single trace with the three configured spans:

What Are The New Features in Python 3.9?