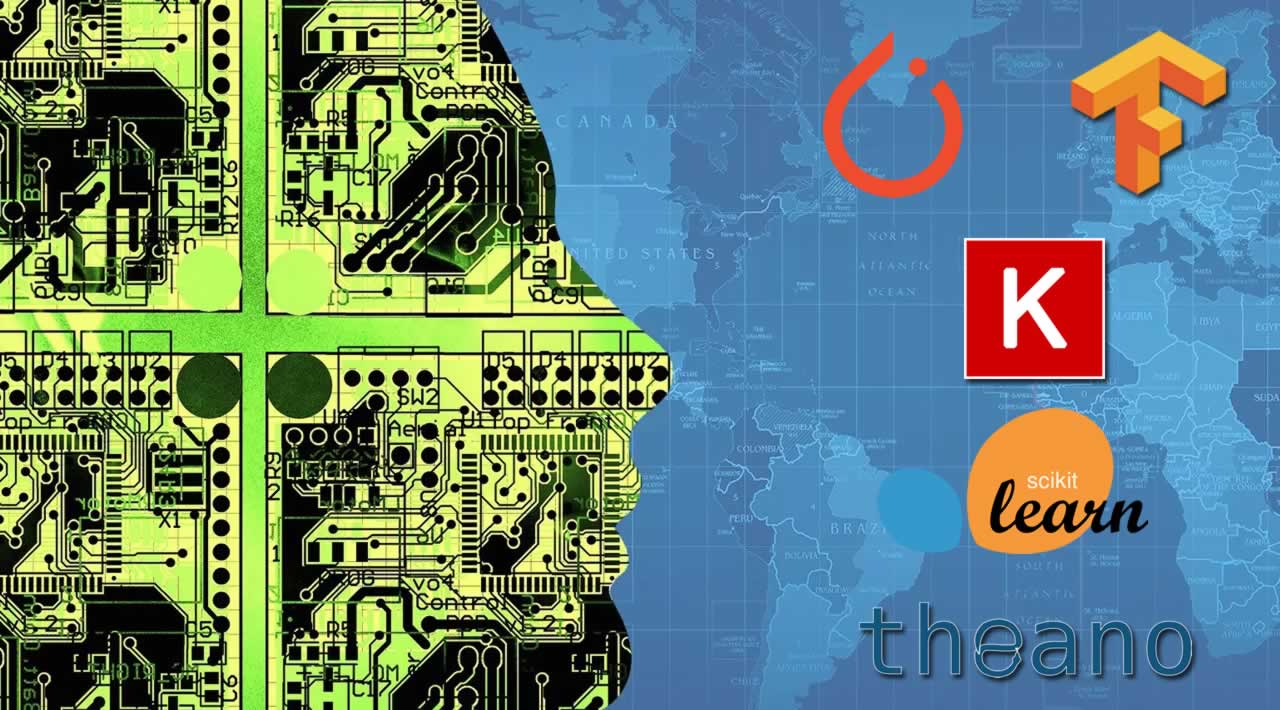 In this post, we will discuss the most popular and important ML/DL libraries in the world right now.

Machine Learning has grown in the past few years at a very rapid rate. This is due to the release of Machine Learning (ML)/Deep Learning (DL) libraries that abstracts away the huge complexity of scaffolding or implementing an ML/DL model.

ML/DL involves a lot of mathematical calculations and operationsת especially Matrix. These ML/DL makes it very easy for a complete noob in ML to start it up like a pro. The very first day I used Tensorflow I was awed by the amount of Matrix operations and mathematics I could skip-over, which was done for me by the library, I was able to build and train a XOR model at the very first attempt.

In this post, we will discuss the most popular and important ML/DL libraries in the world right now.

This is the most popular ML/DL in the world today, it wasn’t the first, but when it came with its simplicity. It grew rapidly to surpass the already existing libraries. It was because of its easy-to-use APIs. You could guess, it was released by Google in November 2015.

It is written in Python, but now we have a JavaScript port of it tensorflow.js.

This was due to the upsurge of JavaScript following the advent of Node.js.

TensorFlow is a free and open-source software library for dataflow and differentiable programming across a range of tasks. It is a symbolic math library, and is also used for machine learning applications such as neural networks.

Theano is a Python library for fast numerical computation that can be run on the CPU or GPU. It was developed by the LISA (now MILA) group at the University of Montreal, Quebec, Canada. It is named after a Greek mathematician, Theano.

Theano is a Python library and optimizing compiler for manipulating and evaluating mathematical expressions, especially matrix-valued ones.

This is a Facebook deep-learning library. PyTorch was built by Facebook, as it name implies it was written in Python.

Compared to Tensorflow, it is easier to learn and use but as you can guess it was beaten by Tensorflow. This is because Tensorflow encompasses a wide-range of stuff in ML/DL while PyTorch has a few. Nonetheless, PyTorch provide a simpler API for working with Neural Networks.

PyTorch is a deep learning library based on the Torch library, used for applications such as computer vision and natural language processing. It is primarily developed by Facebook’s artificial intelligence research group. It is free and open-source software released under the Modified BSD license.

This is a popular ML library, built on NumPy, SciPy and matplotlib. It focuses mostly on ML algorithms:

Like PyTorch it is less mature to Tensorflow, but it provides simple and efficient tools for data mining and data analysis.

Scikit-learn (formerly scikits.learn) is a free software machine learning library for the Python programming language.[3] It features various classification, regression and clustering algorithms including support vector machines, random forests, gradient boosting, k-means and DBSCAN, and is designed to interoperate with the Python numerical and scientific libraries NumPy and SciPy.

Keras is a DL library that wraps around the functionalities of othe libraries like Tensorflow, Theano or CNTK. Written in Python.

Keras has upper-hand on its competitors like Scikit-learn and PyTorch because it runs on top of Tensorflow.

Keras is an open-source neural-network library written in Python. It is capable of running on top of TensorFlow, Microsoft Cognitive Toolkit, Theano, or PlaidML. Designed to enable fast experimentation with deep neural networks, it focuses on being user-friendly, modular, and extensible.

There are many more tools in ML/DL world, but these are the most popular and widely used. ML/DL is a huge world and the most promising tech right now .

If you have any question regarding this or anything I should add, correct or remove, feel free to comment, email or DM me.

TensorFlow is a powerful library for numerical computation, particularly well suited and fine-tuned for large–scale Machine Learning ( but you could use it

Machine learning algorithms are different from other algorithms. With most algorithms, a programmer begins by entering the algorithm.

In this article, I will take you through some highly used applications of Machine Learning in finance sectors that you should be perfect at if you have a good interest in Finance.