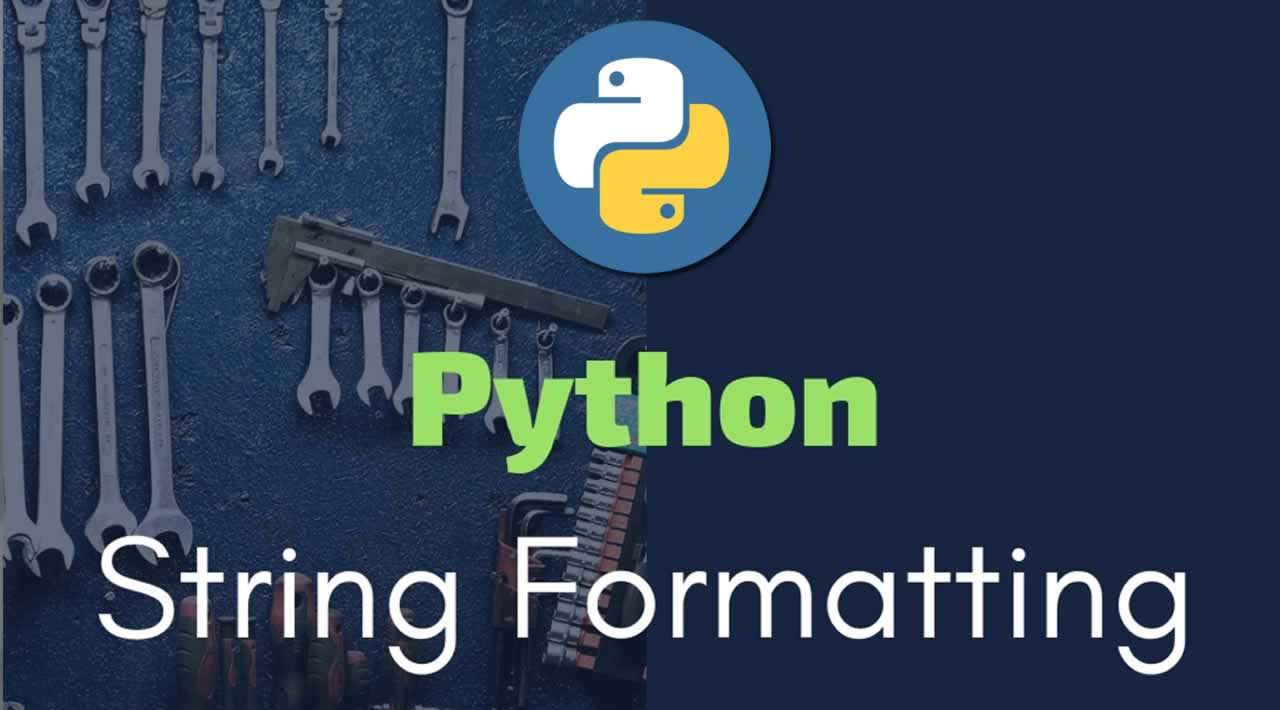 In this tutorial, you’ll learn the four main approaches to string formatting in Python, as well as their strengths and weaknesses. You’ll also get a simple rule of thumb for how to pick the best general purpose string formatting approach in your own programs.

Remember the Zen of Python and how there should be “one obvious way to do something in Python”? You might scratch your head when you find out that there are four major ways to do string formatting in Python.

Let’s jump right in, as we’ve got a lot to cover. In order to have a simple toy example for experimentation, let’s assume you’ve got the following variables (or constants, really) to work with:

Based on these variables, you’d like to generate an output string containing a simple error message:

That error could really spoil a dev’s Monday morning… But we’re here to discuss string formatting. So let’s get to work.

Strings in Python have a unique built-in operation that can be accessed with the % operator. This lets you do simple positional formatting very easily. If you’ve ever worked with a printf-style function in C, you’ll recognize how this works instantly. Here’s a simple example:

I’m using the %s format specifier here to tell Python where to substitute the value of name, represented as a string.

There are other format specifiers available that let you control the output format. For example, it’s possible to convert numbers to hexadecimal notation or add whitespace padding to generate nicely formatted tables and reports. (See Python Docs: “printf-style String Formatting”.)

Here, you can use the %x format specifier to convert an int value to a string and to represent it as a hexadecimal number:

The “old style” string formatting syntax changes slightly if you want to make multiple substitutions in a single string. Because the % operator takes only one argument, you need to wrap the right-hand side in a tuple, like so:

It’s also possible to refer to variable substitutions by name in your format string, if you pass a mapping to the % operator:

This makes your format strings easier to maintain and easier to modify in the future. You don’t have to worry about making sure the order you’re passing in the values matches up with the order in which the values are referenced in the format string. Of course, the downside is that this technique requires a little more typing.

I’m sure you’ve been wondering why this printf-style formatting is called “old style” string formatting. It was technically superseded by “new style” formatting in Python 3, which we’re going to talk about next.

You can use format() to do simple positional formatting, just like you could with “old style” formatting:

Or, you can refer to your variable substitutions by name and use them in any order you want. This is quite a powerful feature as it allows for re-arranging the order of display without changing the arguments passed to format():

This also shows that the syntax to format an int variable as a hexadecimal string has changed. Now you need to pass a format spec by adding a :x suffix. The format string syntax has become more powerful without complicating the simpler use cases. It pays off to read up on this string formatting mini-language in the Python documentation.

In Python 3, this “new style” string formatting is to be preferred over %-style formatting. While “old style” formatting has been de-emphasized, it has not been deprecated. It is still supported in the latest versions of Python. According to this discussion on the Python dev email list and this issue on the Python dev bug tracker, %-formatting is going to stick around for a long time to come.

“The formatting operations described here exhibit a variety of quirks that lead to a number of common errors (such as failing to display tuples and dictionaries correctly). Using the newer formatted string literals or the str.format() interface helps avoid these errors. These alternatives also provide more powerful, flexible and extensible approaches to formatting text.” (Source)

This is why I’d personally try to stick with str.format for new code moving forward. Starting with Python 3.6, there’s yet another way to format your strings. I’ll tell you all about it in the next section.

Python 3.6 added a new string formatting approach called formatted string literals or “f-strings”. This new way of formatting strings lets you use embedded Python expressions inside string constants. Here’s a simple example to give you a feel for the feature:

As you can see, this prefixes the string constant with the letter “f“—hence the name “f-strings.” This new formatting syntax is powerful. Because you can embed arbitrary Python expressions, you can even do inline arithmetic with it. Check out this example:

Formatted string literals are a Python parser feature that converts f-strings into a series of string constants and expressions. They then get joined up to build the final string.

Imagine you had the following greet() function that contains an f-string:

When you disassemble the function and inspect what’s going on behind the scenes, you’ll see that the f-string in the function gets transformed into something similar to the following:

The real implementation is slightly faster than that because it uses the BUILD_STRING opcode as an optimization. But functionally they’re the same:

String literals also support the existing format string syntax of the str.format() method. That allows you to solve the same formatting problems we’ve discussed in the previous two sections:

Python’s new formatted string literals are similar to JavaScript’s Template Literals added in ES2015. I think they’re quite a nice addition to Python, and I’ve already started using them in my day to day (Python 3) work.

Here’s one more tool for string formatting in Python: template strings. It’s a simpler and less powerful mechanism, but in some cases this might be exactly what you’re looking for.

Let’s take a look at a simple greeting example:

You see here that we need to import the Template class from Python’s built-in string module. Template strings are not a core language feature but they’re supplied by the string module in the standard library.

Another difference is that template strings don’t allow format specifiers. So in order to get the previous error string example to work, you’ll need to manually transform the int error number into a hex-string:

The more complex formatting mini-languages of the other string formatting techniques might introduce security vulnerabilities to your programs. For example, it’s possible for format strings to access arbitrary variables in your program.

That means, if a malicious user can supply a format string, they can potentially leak secret keys and other sensitive information! Here’s a simple proof of concept of how this attack might be used against your code:

See how a hypothetical attacker was able to extract our secret string by accessing the globals dictionary from a malicious format string? Scary, huh? Template strings close this attack vector. This makes them a safer choice if you’re handling format strings generated from user input:

Which String Formatting Method Should You Use?

I totally get that having so much choice for how to format your strings in Python can feel very confusing. This is an excellent cue to bust out this handy flowchart infographic I’ve put together for you:

I have a dataframe like below, and I need to create a new column&nbsp;Block&nbsp;with either the value&nbsp;1&nbsp;or&nbsp;2&nbsp;in it based on a partial string match in the column&nbsp;Program Number&nbsp;where it says _block_1 or _block_2. I've been trying if statements and&nbsp;.str.contains&nbsp;but can't get it to work. How would you do this?

I have a dataframe like below, and I need to create a new column Block with either the value 1 or 2 in it based on a partial string match in the column Program Number where it says _block_1 or _block_2. I've been trying if statements and .str.contains but can't get it to work. How would you do this?