TypeScript vs. Flow - What is the Difference? 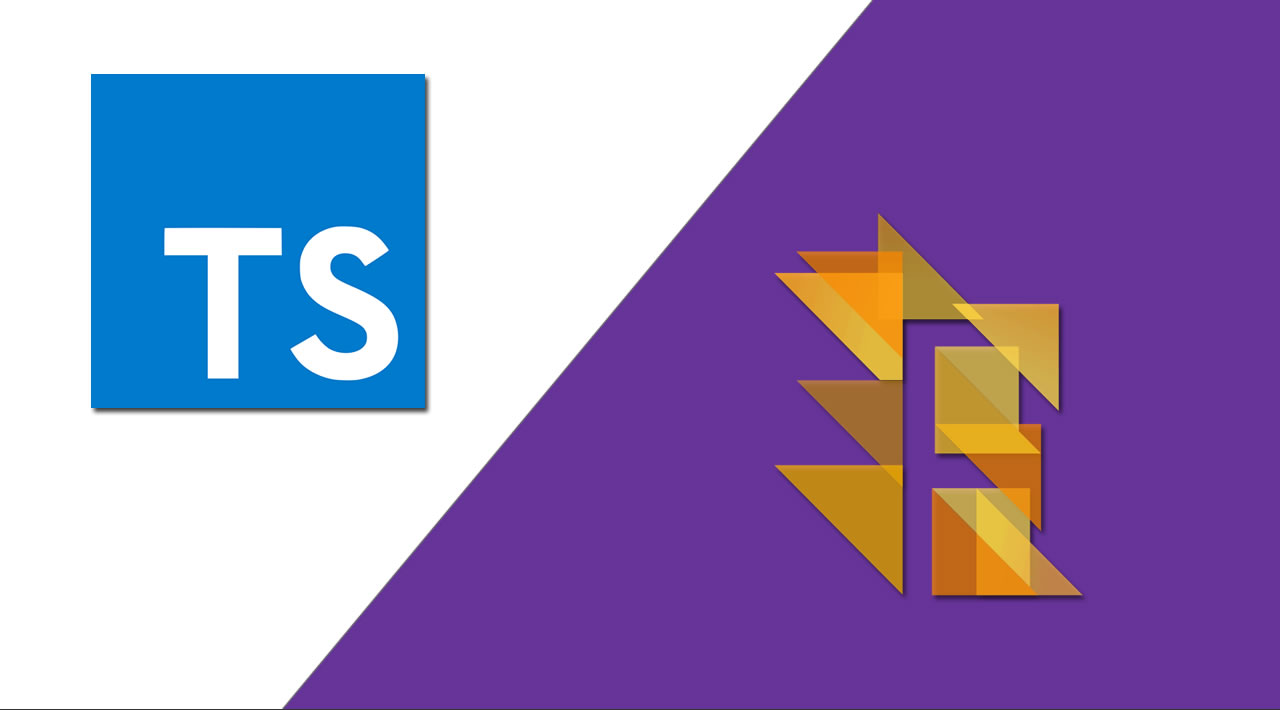 JavaScript is a dynamically typed language. There are two typed extensions of JavaScript, Microsoft’s TypeScript and Facebook’s Flow. In this article, we’ll look at and compare the features of each of these. Differences between Flowtype and TypeScript

JavaScript is a dynamically typed language. This means that data types of variables can change as we assign different values to them.

There are two typed extensions of JavaScript, Microsoft’s TypeScript and Facebook’s Flow. In this article, we’ll look at and compare the features of each of these.

From the support perspective, TypeScript is much better because major frontend frameworks like Vue, Angular, and Facebook’s own React all support TypeScript out of the box. For example, we can build a Vue project with TypeScript by choosing the TypeScript option from the Vue CLI.

Once we chose TypeScript, then we can configure it to transpile to JavaScript, (usually ES5) to maximize the support of browsers.

Then when we reference Vue when creating our component we’ll get TypeScript type inference:

Also, with Vue, we can write components with TypeScript in its own special way with classes like this:

We can see the familiar JavaScript syntax with some TypeScript annotations. For example, Angular is built with TypeScript and it uses TypeScript almost exclusively. There was an option to write Angular apps with plain JavaScript but it never caught on.

On the other hand, Flow is only supported by React. According to this document, we can use Flow with React, we just have to add Flow support in the Babel configuration to enable support for Flow with Babel.

to the .babelrc file.

Both TypeScript and Flow have operators and various utility types to preserve the flexibility of the JavaScript type system. For instance, the following is the same in both Flow and TypeScript:

The function above takes two strings and then returns both concatenated together. They both have types for optional properties. TypeScript has the nullable type and Flow has the maybe type. Both Flow and TypeScript have generics, which we can use to write code that takes a variable type.

For instance, the following function takes whatever is passed in and returns the same thing:

We can use it by writing:

Flow provides typecasting as does TypeScript. They work similarly. With Flow, we can cast a value to a related type by using the : symbol like this:

The code above is Flow code to cast a value type 1 to a number.

With TypeScript, we can cast types using the as operator like this:

Another important feature that both Flow and TypeScript have are interfaces. Interfaces are used as types that restrict the structure of an object.

The code above creates a class that implements the PersonInterface interface.

We’ll get an error with the Flow and TypeScript transpilers if we didn’t implement all the members listed in the interface.

This isn’t available with TypeScript. However, this isn’t a big draw since comments don’t have autocomplete or syntax highlighting.

TypeScript has much better support with text editors. Editors like Visual Studio Code and IDEs like WebStorm have built-in support for TypeScript. As we can see from JetBrain’s website, WebStorm has built-in support for debugging TypeScript code and also checking it for errors. Syntax and compilation errors are displayed right in the IDE. Hints are available as we’re typing in code in WebStorm. Type checking with TypeScript is built into these programs.

Supporting TypeScript means that developers get full type checking, auto-complete, and compiler errors right on the screen of your editor even before building the code. TypeScript code has type definitions that are added to libraries to denote the types that the code has.

Type definitions are bundled with libraries like Lodash and moment.js so that we get autocomplete and type checking support in text editors that work with TypeScript like Visual Studio Code. 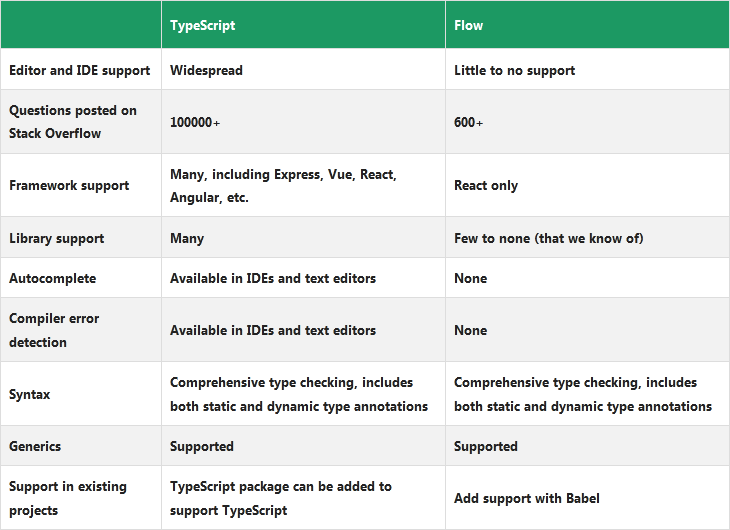 Community support for TypeScript is much better than Flow, as we have already mentioned. Other than React, Flow’s support is sparse. Most libraries don’t support Flow.

Also, there’s little documentation outside of the official sources, and in Stack Overflow, there aren’t too many questions about Flow when compared to TypeScript.

As we can see from https://stackoverflow.com/questions/tagged/typescript, there are more than 100,000 questions for TypeScript and from https://stackoverflow.com/questions/tagged/flow we only see a few hundred questions, and most of them have nothing to do with Facebook’s Flow. For instance, there’s also documentation for adding Flow support to a Create React App project.

Also, for plain JavaScript projects, there is documentation to install Flow support in an existing project via Babel. Many frameworks have support for TypeScript, including Vue, Angular, and React frontend frameworks as we saw above. Also, Node.js web frameworks like Express can have TypeScript support added. Nest.js is a backend framework that’s built with TypeScript support baked in, allowing us to use TypeScript for development without making big changes to our project.

For example, with Express, we just have to run:

to install the TypeScript transpiler.

Then we can add a tsconfig.json file to configure our TypeScript transpiler by writing something like:

Then to install the type definitions for Express and Node’s standard library, we run:

As we can see, it’s not too hard to use TypeScript with existing libraries since there are TypeScript type definitions for many libraries and frameworks.

For more type definitions for TypeScript, we can go to the DefinitelyTyped website.

As we mentioned in the developer experience section, editor support is way better with TypeScript. Visual Studio Code, Sublime, and other editors have support for TypeScript either built-in as with Visual Studio Code or available as a plug-in for Sublime.

TypeScript definitely wins in terms of the quantity, resources, and documentation available.

Since it’s supported by many libraries and frameworks, lots of people are using TypeScript daily. There is plenty of information about each feature in TypeScript, including examples and explanations.

Here are a few more resources

On the other hand, Flow only has some documentation and a short document on how to set up Flow with React.

TypeScript is definitely the more widely used language that’s transpiled to JavaScript. TypeScript has more support than Flow does with libraries, frameworks, and it’s used more pervasively in apps because of that. They both provide very similar type checking abilities which retain the flexibility of JavaScript.

TypeScript and Flow both include all the built-in JavaScript data types. In addition, we can use it to define literal types, union types, intersection types, etc. to create more flexible types.

In addition, they both have interfaces to restrict the members that we can add to objects when they’re used to annotate the type of an object. For creating scalable JavaScript code, TypeScript is definitely the winner since no other alternatives have such pervasive usage and support.

Typing in JavaScript — Flow vs. TypeScript

Typing in JavaScript — Flow vs. TypeScript. There are two typed extensions of JavaScript, Microsoft’s TypeScript and Facebook’s Flow. We’ll look at and compare these type checkers in this post