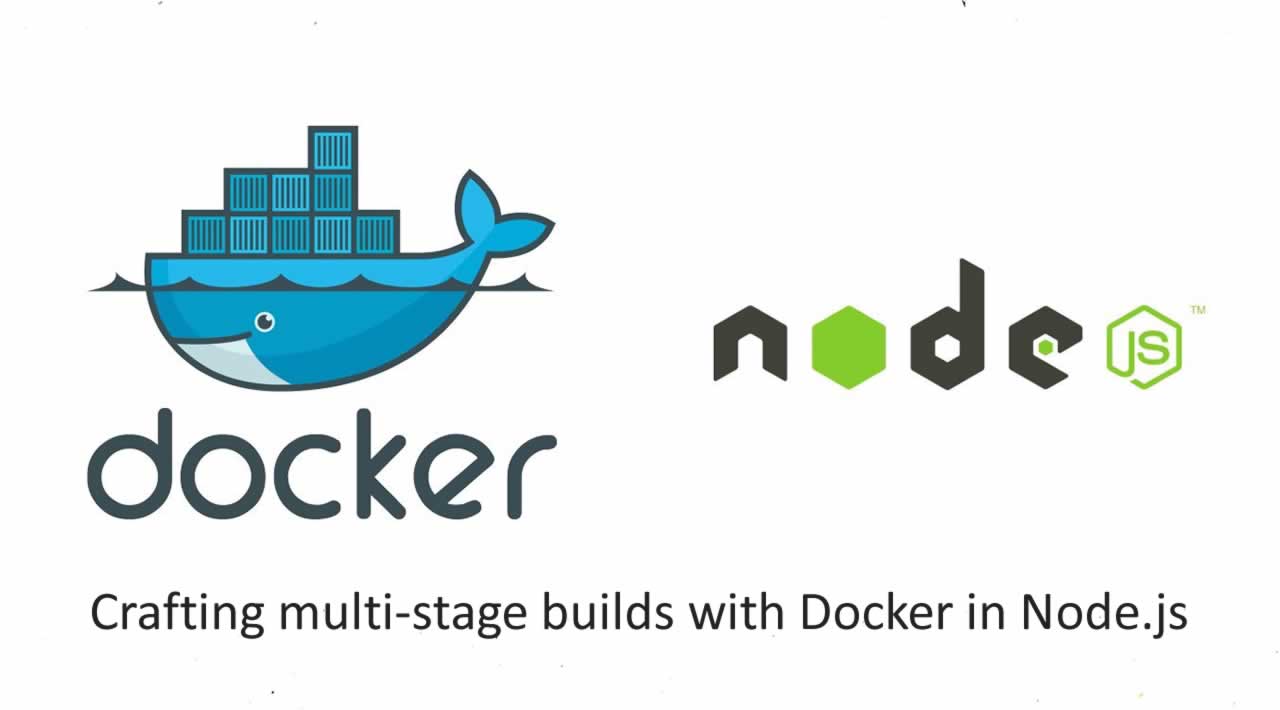 Learn how you can use a multi-stage Docker build for your Node.js application. Docker multi-stage builds enable us to create more complex build pipelines without having to resort to magic tricks.

Everyone knows about Docker. It’s the ubiquitous tool for packaging and distribution of applications that seemed to come from nowhere and take over our industry! If you are reading this, it means you already understand the basics of Docker and are now looking to create a more complex build pipeline.

In the past, optimizing our Docker images has been a challenging experience. All sorts of magic tricks were employed to reduce the size of our applications before they went to production. Things are different now because support for multi-stage builds has been added to Docker.

In this post, we explore how you can use a multi-stage build for your Node.js application. For an example, we’ll use a TypeScript build process, but the same kind of thing will work for any build pipeline. So even if you’d prefer to use Babel, or maybe you need to build a React client, then a Docker multi-stage build can work for you as well.

A basic, single-stage Dockerfile for Node.js

Let’s start by looking at a basic Dockerfile for Node.js. We can visualize the normal Docker build process as shown in Figure 1 below.

The Dockerfile in Listing 1 below is just a standard, run-of-the-mill Dockerfile for Node.js. You have probably seen this kind of thing before. All we are doing here is copying the package.json, installing production dependencies, copying the source code, and finally starting the application.

This Dockerfile is for regular JavaScript applications, so we don’t need a build process yet. I’m only showing you this simple Dockerfile so you can compare it to the multi-stage Dockerfile I’ll be showing you soon.

Listing 1: A run-of-the-mill Dockerfile for Node.js

The need for multiple stages

We can already run whatever commands we want in the Dockerfile when building our image, so why do we even need a multi-stage build?

To find out why, let’s upgrade our simple Dockerfile to include a TypeScript build process. Listing 2 shows the upgraded Dockerfile. I’ve bolded the updated lines so you can easily pick them out.

Listing 2: We have upgraded our simple Dockerfile to include a TypeScript build process

We can easily and directly see the problem this causes. To see it for yourself, you should instantiate a container from this image and then shell into it and inspect its file system.

I did this and used the Linux tree command to list all the directories and files in the container. You can see the result in Figure 3.

FIgure 3: The debris from development and the build process is bloating our production Docker image. Bear in mind this is only a trivial project, so we aren’t actually seeing too much cruft left in our production image. But you can imagine how bad this would be for a real application with many sources files, many dev dependencies, and a more complex build process that generates temporary files!

We don’t want this extra bloat in production. The extra size makes our containers bigger. When our containers are bigger than needed, it means we aren’t making efficient use of our resources. The increased surface area of the container can also be a problem for security, where we generally prefer to minimize the attackable surface area of our application.

Wouldn’t it be nice if we could throw away the files we don’t want and just keep the ones we do want? This is exactly what a Docker multi-stage build can do for us.

Crafting a Dockerfile with a multi-stage build

We are going to split out Dockerfile into two stages. Figure 4 shows what our build pipeline looks like after the split.

Our new multi-stage build pipeline has two stages: Build stage 1 is what builds our TypeScript code; Build stage 2 is what creates our production Docker image. The final Docker image produced at the end of this pipeline contains only what it needs and omits the cruft we don’t want.

Compare this to a regular single-stage Dockerfile, and you can see that it actually looks like two Dockerfiles squished together in one.

The most important thing to note is the use of --from in the second stage. I’ve bolded this line in Listing 3 so you can easily pick it out. This is the syntax we use to pull the built files from our first stage, which we refer to here as stage 0. We are pulling the compiled JavaScript files from the first stage into the second stage.

We can easily check to make sure we got the desired result. After creating the new image and instantiating a container, I shelled in to check the contents of the file system. You can see in Figure 5 that we have successfully removed the debris from our production image.

Figure 5: We have removed the debris of development from our Docker image.

We now have fewer files in our image, it’s smaller, and it has less surface area. Yay! Mission accomplished.

But what, specifically, does this mean?

The effect of the multi-stage build

What exactly is the effect of the new build pipeline on our production image?

I measured the results before and after. Our single-stage image produced by Listing 2 weighs in at 955MB. After converting to the multi-stage build in Listing 3, the image now comes to 902MB. That’s a reasonable reduction — we removed 53MB from our image!

While 53MB seems like a lot, we have actually only shaved off just more than 5 percent of the size. I know what you’re going to say now: But Ash, our image is still monstrously huge! There’s still way too much bloat in that image.

Well, to make our image even smaller, we now need to use the alpine, or slimmed-down, Node.js base image. We can do this by changing our second build stage from node:10.15.2 to node:10.15.2-alpine.

This reduces our production image down to 73MB — that’s a huge win! Now the savings we get from discarding our debris is more like a whopping 60 percent. Alright, we are really getting somewhere now!

This highlights another benefit of multi-stage builds: we can use separate Docker base images for each of our build stages. This means you can customize each build stage by using a different base image.

Say you have one stage that relies on some tools that are in a different image, or you have created a special Docker image that is custom for your build process. This gives us a lot of flexibility when constructing our build pipelines.

You probably already guessed this: each stage or build process produces its own separate Docker image. You can see how this works in Figure 6.

The Docker image produced by a stage can be used by the following stages. Once the final image is produced, all the intermediate images are discarded; we take what we want for the final image, and the rest gets thrown away.

Figure 6: Each stage of a multi-stage Docker build produces an image.

There’s no need to stop at two stages, although that’s often all that’s needed; we can add as many stages as we need. A specific example is illustrated in Figure 7.

Here we are building TypeScript code in stage 1 and our React client in stage 2. In addition, there’s a third stage that produces the final image from the results of the first two stages.

Now time to leave you with a few advanced tips to explore on your own:

Docker multi-stage builds enable us to create more complex build pipelines without having to resort to magic tricks. They help us slim down our production Docker images and remove the bloat. They also allow us to structure and modularize our build process, which makes it easier to test parts of our build process in isolation.

So please have some fun with Docker multi-stage builds, and don’t forget to have a look at the example code on GitHub.

Here’s the Docker documentation on multi-stage builds, too.