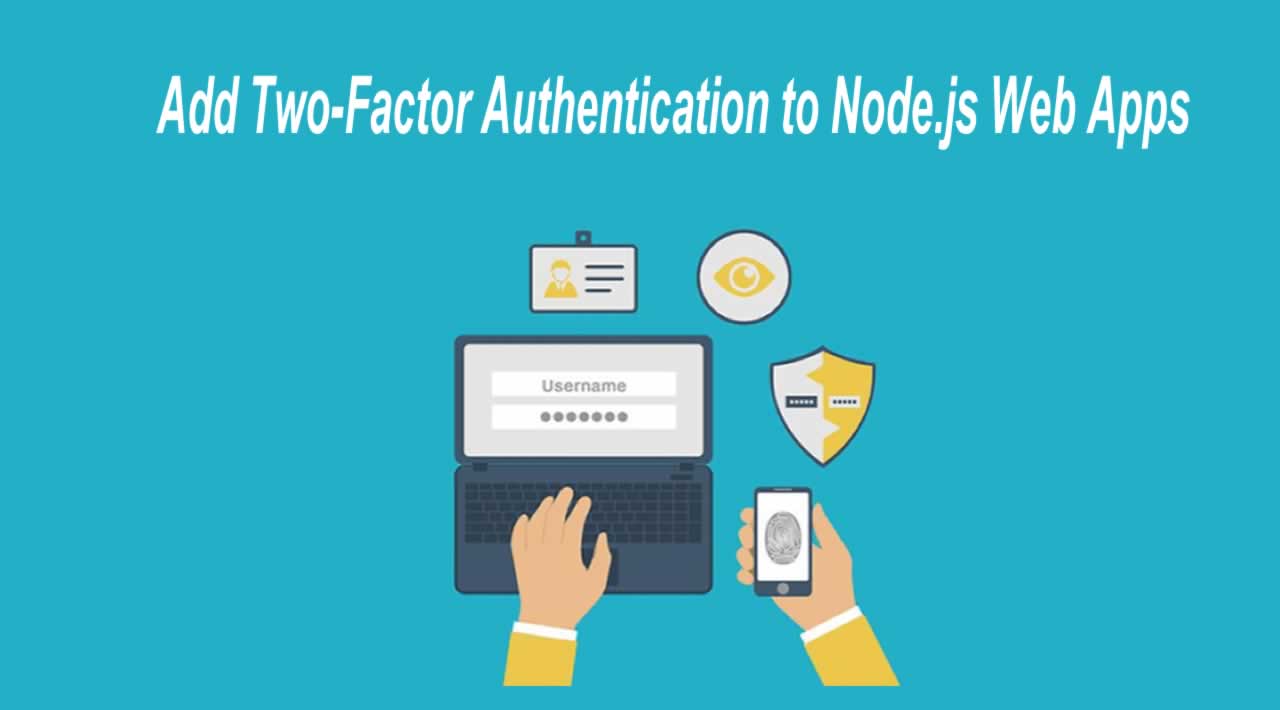 In this tutorial you'll see how you can add two-factor authentication (2FA) to your web app using the Nexmo Verify API and Node.js.

In this tutorial you'll see how you can add two-factor authentication (2FA) to your web app using the Nexmo Verify API and Node.js.

Two-factor authentication (2FA) gets its name from the fact that you require two things to verify your identity. Something you know, like a password, and something you have, like the verification code from your mobile device or physical token.

Adding 2FA to your application does not have to be a difficult chore. This tutorial will cover how to implement 2FA for your web applications and services for an additional layer of security with the help of the Nexmo Verify API. We will be building a simple Koa.js application to understand how the underlying mechanism works. This will make it easier to see how this will fit into your own existing projects, even if you are not using Koa.js.

You would start off with a login page that asks your user for a mobile phone number. Upon submission, they would be asked to input a verification code that gets sent to their mobile phone number via SMS. Once that’s sorted, they can access the application.

This tutorial will take you through the process from scratch. If you’d like to see the finished code, you can clone the git repository for this project. We also have a Glitch version, which has a more over-the-top design, and you can remix it as well. Note that they are slight differences for the Glitch implementation to cater for how projects are hosted on the platform. 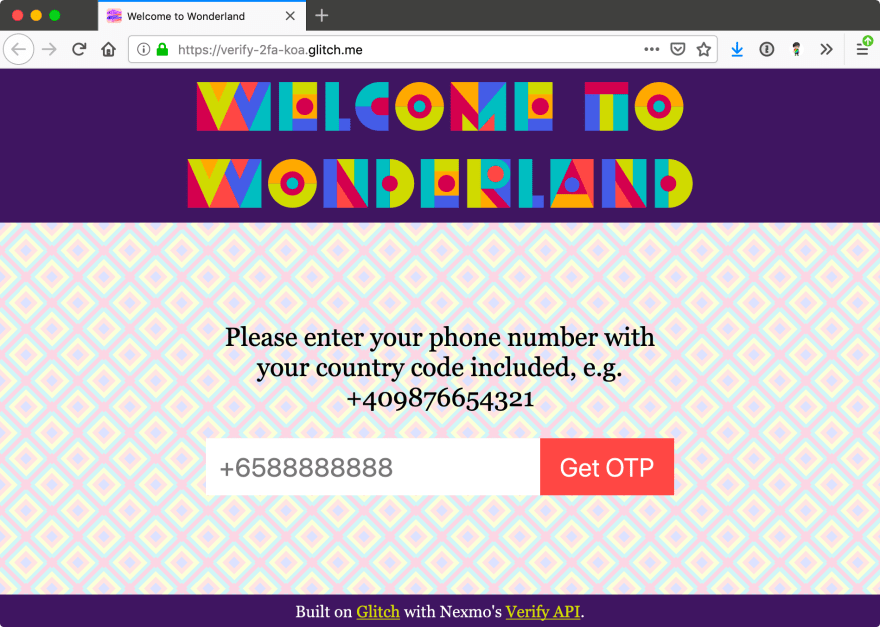 Starting a Koa.js project from scratch

Create a project folder on your local machine, then run the following command to set up a new Node.js project.

This will trigger a series of prompts that will generate your package.jsonfile. You can choose to leave the answers blank to use the default values if you wish. 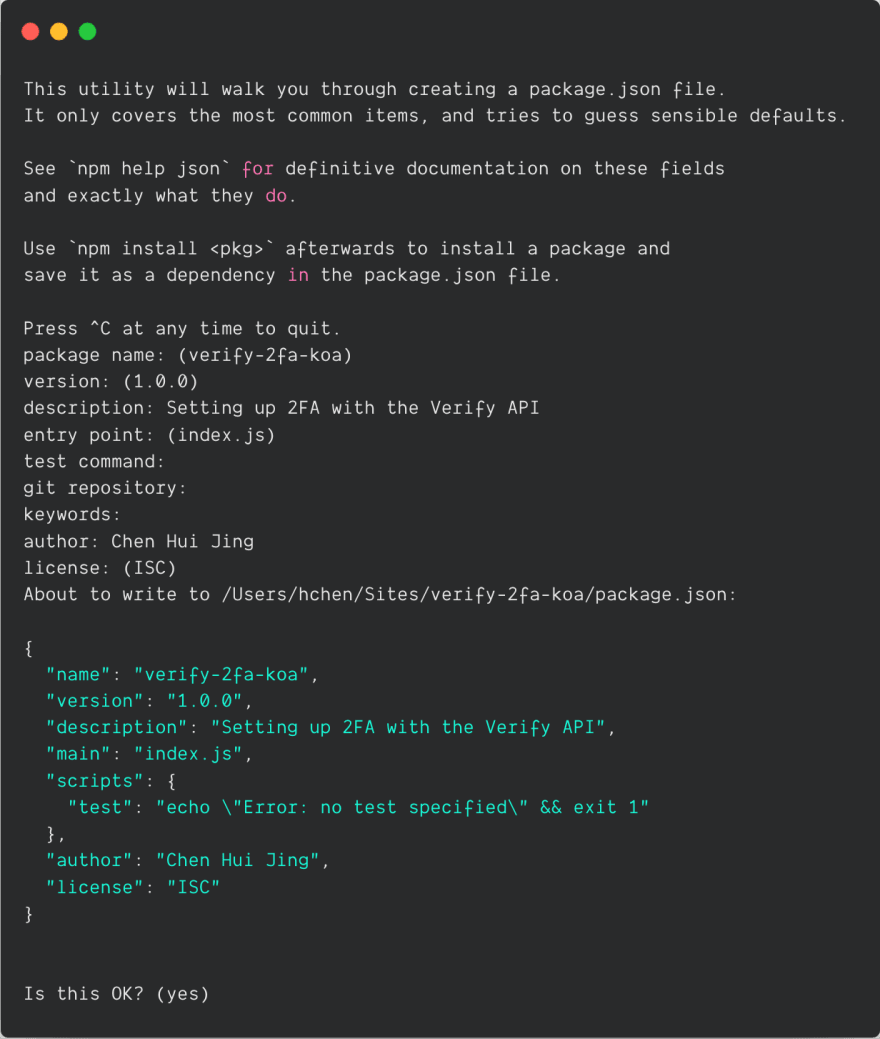 Next, install Koa.js. Do note that Koa requires node v7.6.0 or higher for ES2015 and async function support.

Create a package.json file in your project folder.

Paste the following code into your newly created file.

If you navigate to package.json from your browser, you should see an empty page with the text, “Hello Unicorn 🦄”. 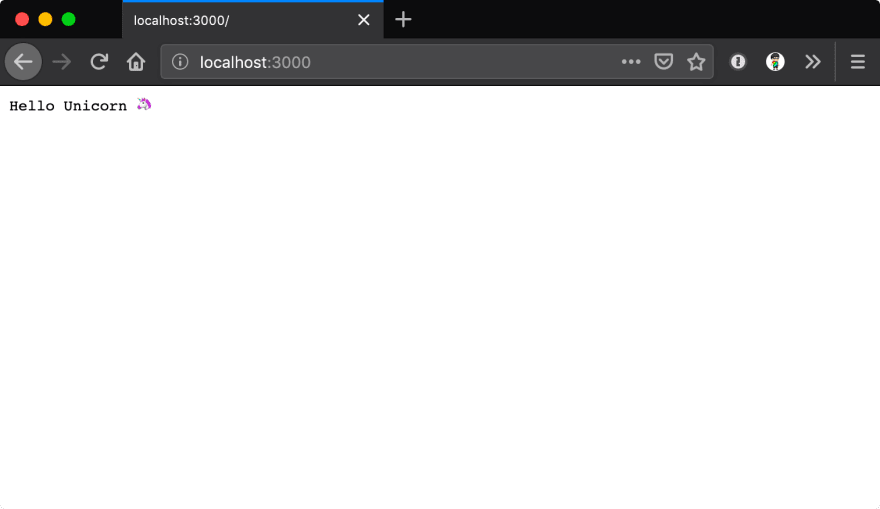 You should also install dotenv, which allows you to load environment variables stored in a package.json file into package.json.

And now you can create the package.json file and it should contain at least the following variables:

To access environment variables, you’ll have to require it, ideally at the top of your package.json file.

If you haven’t signed up for a Nexmo account yet, now is a pretty good time to do it. Once you’ve logged into the dashboard, your API credentials should be the first thing you see. Be sure to enclose both your key and secret with quotes.

With that, you’ll have to make some tweaks to the package.json file to serve the package.json file and related assets, instead of simply a line of text. Koa.js is a fairly barebones framework, so any additional functionalities for routing or serving static assets need to be installed separately. Here is the list of additional modules and their uses:

This example also makes use of Nunjucks to render template files. The Nexmo Verify API will be used to trigger the verification code via SMS, so you will need to install Nexmo’s Node.js client library as well.

To allow the application to serve static assets. like stylesheets and client-side Javascript, out of the /public folder, you can add the following to the package.json file:

The next thing to set up would be some basic routes for serving your application pages.

The structure of the web form is fairly straightforward, and you are free to spruce it up with CSS however you wish.

This form will post the user inputs to the package.json route and you can use the phone number in the input to trigger the verification code request. A similar form can be used for the other 2 routes for package.json and package.json as well.

Then, for handling user inputs via web forms, you will need some routes to handle package.json requests as well. Do make sure to declare package.json before any of the routes.

Now that you’re able to receive your user’s phone number, you will need to use the Verify API to send a PIN code to it. Initialise a new Nexmo instance with your credentials.

There are 3 functions we need to take care of. The first one is to trigger the verification code with the package.json function. It involves the user’s phone number, and a string for the brand name which will be displayed to the user as the sender.

The last function gives your user the option to cancel the verification if they changed their mind. It uses the package.json function, and again, requires the request ID generated from triggering the PIN code and a string value of package.json. 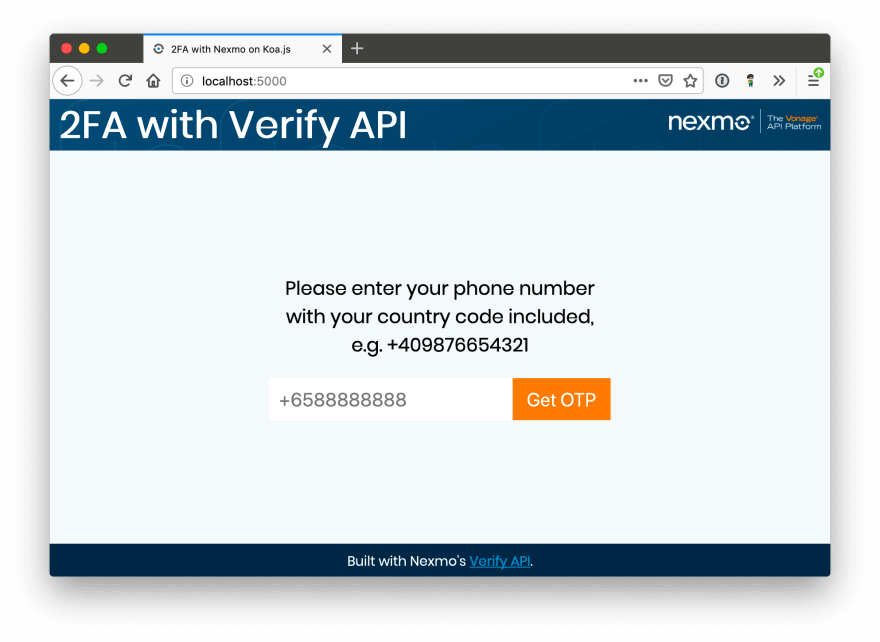 Now you need to make use of these 3 functions in the routes we specified earlier, starting with the one for triggering the verification code first.

From there, you can send the request ID over to the frontend for use when the user enters the verification code. 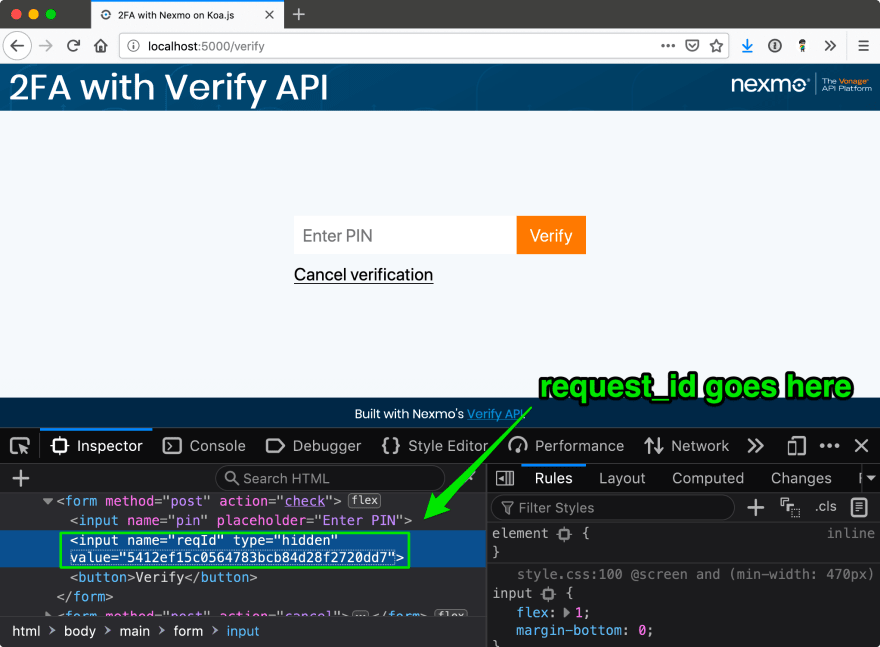 When your user submits the correct PIN, you will need to plug both the PIN and the request ID into the package.json function.

Again, both those values can be obtained from the package.json and if the PIN is validated to be correct, you will receive a response that looks like this:

You can then make use of the status code to determine what message you would like to display to your user. This example uses Nunjucks, so the markup on the results page could look something like this:

This was a thorough break-down of each part of the code but for a look at how the application looks like in its entirety, do check out the source code on GitHub.

Additional things to take care of

This tutorial is a stripped down version, highlighting only the bits necessary for implementing two-factor authentication. But there are numerous things that have to be taken care of in an actual application. One of the most important is error handling. The Verify API returns a status value of package.json for successful queries, but any other value indicates an error.

These errors should be handled and the user interface on the frontend should reflect any potential errors preventing sucessful verification. It might also be a good idea to implement some sort of frontend validation, or even utilise Nexmo’s Number Insight API to ensure only valid phone numbers are passed to the Verify API.