How to Build a Instant Messaging App: Things You Should Focus On to Succeed Let’s draw the premise first - Instant messaging has become the primary communication today! We have come a long way from writing letters to emails to now chatting with Brands. Companies are now counting on real-time messaging app to nurture...

Let’s draw the premise first - Instant messaging has become the primary communication today! We have come a long way from writing letters to emails to now chatting with Brands. Companies are now counting on real-time messaging app to nurture communication between employees and also with customers. The scale and scope of business success, and also its further expansion is quite literally on fingertips today!

There has never been a more perfect time to launch an instant messaging solution for acquiring and retaining more customers. Companies are now using them as an exclusive tool for proficient communication tool between employees of the company. Either way, it’s a win-win! 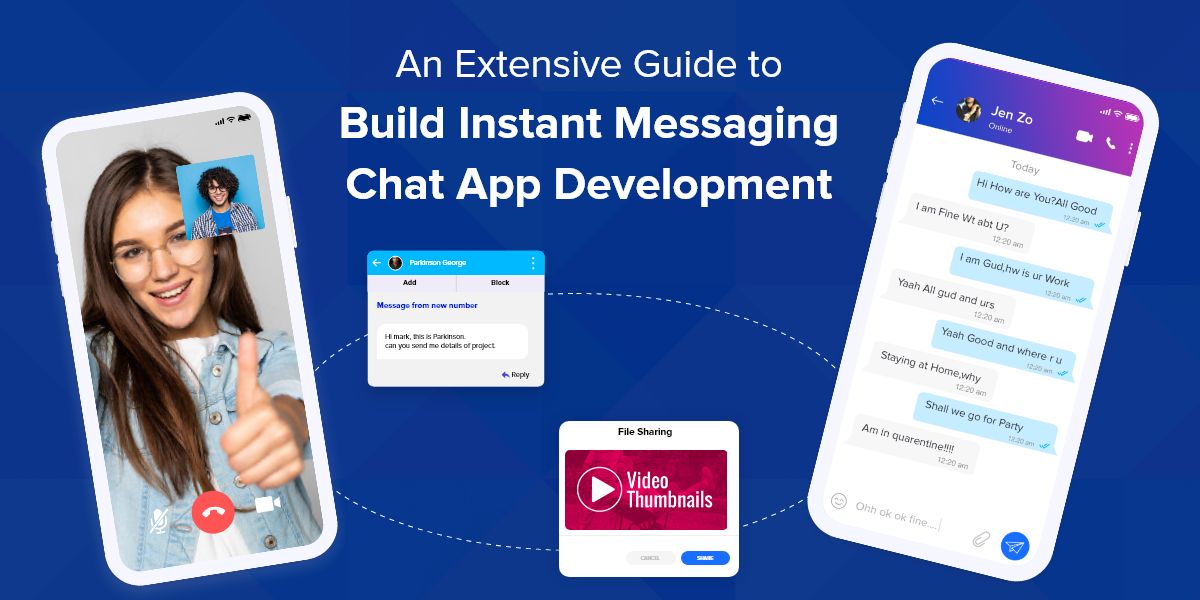 Must-have functionality Here are the main features that will turn your application into a silver bullet.

Yes! Absolutely! There’s no way around it - Your chat application should have an instant messaging service through which customers and employers can chat in real-time. These messages carry very little data with them but should have convenience at fingertips! What would be the other defining features?

Sticking to just one mode of communication is not ideal. CU-SeeMe was the first-ever desktop video conferencing software developed by Tim Dorsey during the 1990s. Today, we have free video and voice calling features in almost every instant chat application allowing people to connect using just the internet connection.

There is immense benefit in implementing both. It allows for more convenience to communicate while users cannot send out text messages. This feature can be a lifesaver even in case of a simple glitch or error in keyboard software on the phone.

This feature enables users/employees/customers to share important documents in form of images or PDFs. It can be linked to a phone gallery or even cloud servers on the phone where people store data.

Using public channels to broadcast or announce anything, without the unnecessary influx of messages or discussions. It can be beneficial for businesses as well as new brands trying to bring in a business announcement among their audience.

Bridge your app with Social Media

Signing in thorough social media has become relatively easier than filling lengthy forms. Sharing links or files through these platforms is easier as accessing social media is easy-peasy today.

These are some of the basic boundaries you have to draw while you are in the process of building the chat app. It time that we discuss the technicalities of instant messaging app development.

Be it any chat app, there should be a protocol that allows users to exchange data between them. These set of rules determine how seamless and low latent the communication between both the parties would be. So what are these protocols?

The basic root protocol of XMPP that dates back to times when ICQ was famous. It got evolved into XMPP that is known for its effective push mechanism. The best part about this protocol is the liberty that it grants for any developer to use the XMPP server. This set of rules uses extremely secure SASL encryption. The drawback of this protocol is the extra labor developers need to put in to ensure message delivery confirmation in the app. Even though it is secure, the complexity of it is way too much - resulting in glitches and delays. Not very ideal!

Known as the publish-subscribe network protocol, this is an open OASIS and IPO standard lightweight set of rules. It can run on any network protocol which ensures lossless, ordered, bi-directional connections that support MQTT. It also connects with different IoT devices. It gets flake for its complicated process of developing a custom service or plugins that authenticate, authorize, and publishes to queue. It’s architectural and performance complications overarch the good it has to offer.

Websockets are an amazing protocol solution for messaging app development. They provide a full-duplex connection over a single TCP connection. It has a strong point of bi-directional flows where one does not need to wait for servers to respond. Known as a ‘Handshake’, a connection between a browser/client and server can be established for a lifetime when WebSocket connections are requested by the browsers.

No compromise on Programming Languages

Apart from a flexible protocol, the coding language must also be strong enough to support millions of node interactions. Let’s look at three strong programming languages to create a instant messaging app.

What about storing chat?

Another additional technical robustness to pay attention to while in the Storage of chat history. Here there are two options to choose from - Cloud storage or User device storage. Generally, people do get frustrated for storing a lot of data because of limited storage capabilities. But on the other hand, opting for cloud storage will incur additional expenses for the developer.

API’s are the core of building a messaging app. It is the foundation where for event processing, message routing, authentication, and other programs take place. 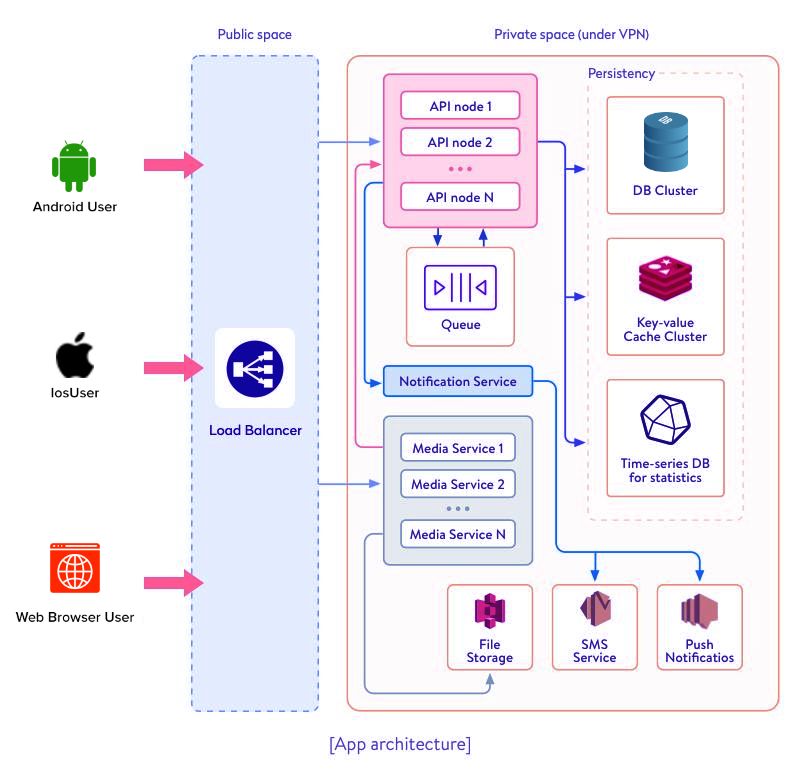 2. The flow of Messages in the app - how the process should be ↓

Let’s see how messages are distributed in a group with three participants (see the schema below):

The flow of the process is demonstrated in the image. 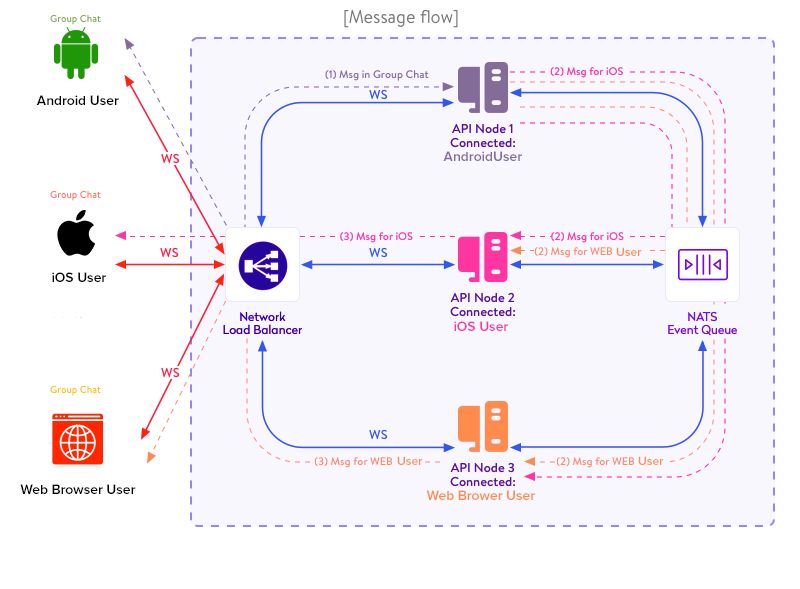 The success of the messaging app entirely depends on Architectural support. It should swiftly deliver messages even in case of network delays. Synchronization between multiple devices must be adept for which there are more requirements from the server-side software architecture. Event Sourcing pattern by Microsoft is ideal for a messaging app. This pattern records a series of events executed on the data instead of storing it in a domain. 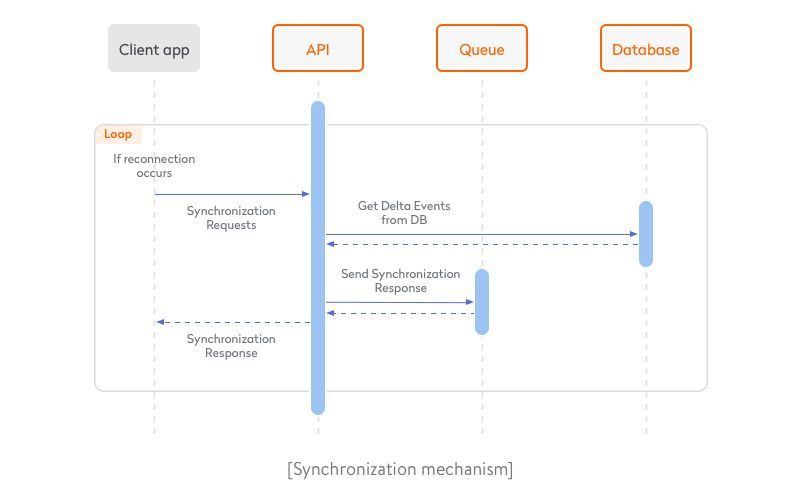 Use WebRTC solution which is a collection of APIs and Protocols which ensure real-time user-to-user connection to share and stream audio-video. 3 main pillar APIs for WebRTC for smooth streaming is -

5. How to go about Media Processing?

The bulk of the work - which is the image, audio, or video processing should partially be on the client-side, and then comes the server participation. It is advisable to process media in the backend of the app. Developing a solution independent from any cloud support will redirect the result in programming the app’s own scalable media service.

6.The most crucial pillar of the entire app development process - Security!

To compete in the market, you should constantly improve your app’s functionality. We’ve gathered a list of advanced features that will make your app a robust competitor to giants like WhatsApp and WeChat.