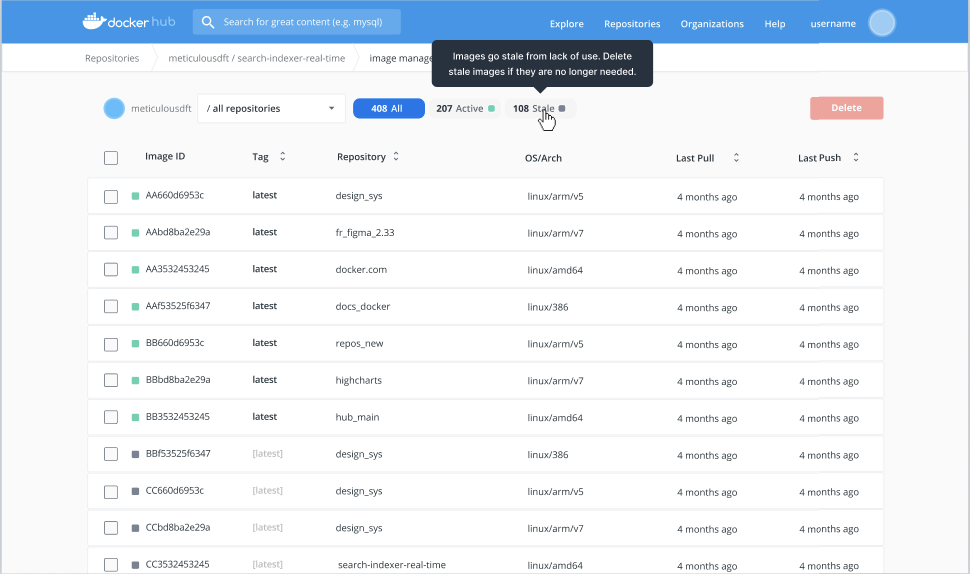 Docker Hub Image Retention Policy Delayed, Subscription Updates. Today we are announcing that we are pausing enforcement of the changes to image retention until mid 2021. ... Instead, Docker is focusing on consumption-based subscriptions that meet the needs of all of our customers

Today we are announcing that we are pausing enforcement of the changes to image retention until mid 2021. Two months ago, we announced a change to Docker image retention policies to reduce overall resource consumption. As originally stated, this change, which was set to take effect on November 1, 2020, would result in the deletion of images for free Docker account users after six months of inactivity. After this announcement, we heard feedback from many members of the Docker community about challenges this posed, in terms of adjusting to the policy without visibility as well as tooling needed to manage an organization’s Docker Hub images. Today’s announcement means Docker will not enforce image expiration enforcement on November 1*. *Instead, Docker is focusing on consumption-based subscriptions that meet the needs of all of our customers.In this model, as the needs of a developer grow, they can upgrade to a subscription that meets their requirements without limits.

This change means that developers will get a base level of consumption to start, and can extend their subscriptions as their needs grow and evolve, only paying for what is actually needed. The community of 6.7 million registered Docker developers is incredibly diverse–the requirements of someone getting started with containers is different than the needs of an OSS project organizer which are also different for a 40,000 person software development team. Our new model gives each individual developer or organization the opportunity to scale their usage and consumption along the dimensions that make most sense to them.

As we make this move to consumption-based subscriptions, we are also creating new capabilities to help users understand and manage their usage of various resources on the Docker platform. As an example of this, for image storage on Docker Hub we will soon release an experimental Hub CLI tool, a Hub Dashboard and new APIs. Our goal is to give developers the insights required to effectively understand and manage their image storage in Docker Hub. We will be delivering the first tools in the coming weeks, and will announce the timeline for new image retention policies early in 2021.

Continuing with our move towards consumption-based limits, customers will see the new rate limits for Docker pulls of container images at each tier of Docker subscriptions starting from November 1, 2020. Anonymous free users will be limited to 100 pulls per six hours, and authenticated free users will be limited to 200 pulls per six hours. Docker Pro and Team subscribers can pull container images from Docker Hub without restriction as long as the quantities are not excessive or abusive. We want our Docker Pro subscription to be the best way for individual developers to work with Docker and our Team subscription to continue to add value for teams to come together as they scale their usage with tools like CI/CD. The levels for what is abusive/excessive will be managed with these two goals in mind.

Excessive usage/abuse of Pro and Team limits will be initially managed through a process where a customer will be informed about the usage overage through email as well as the ability to get usage information in response headers from Docker Hub. Continued abuse may be followed with hard restriction in usage. Details about Docker subscription levels and differentiators are available on the Docker Pricing Page.

Going forward you will see this model extended to other capabilities available from Docker in order to provide maximum flexibility for developers. With millions of developers pulling billions of images per month, any change we make to the system has to be considered with our community in mind. We appreciate the feedback and suggestions from the Docker community, and we are excited to share more new features with you in the coming weeks and months.

Learn from Docker experts to simplify and advance your app development and management with Docker. In this article, we’ll take a look at determining where you currently fall within the rate limiting policy using some command line tools.

An image like the one we created in the Node.js Hello World Docker Container from scratch post is simple, yet it’s a perfect example to try one of the cool features of Docker, provided through Docker Hub, the official hosting service of public and private Docker Images. Before we can do that, however, we need to register on Docker Hub. Docker Hub is free in its basic plan which includes unlimited public repos and one private repo.