How to query JSON documents in the Terminal with GROQ 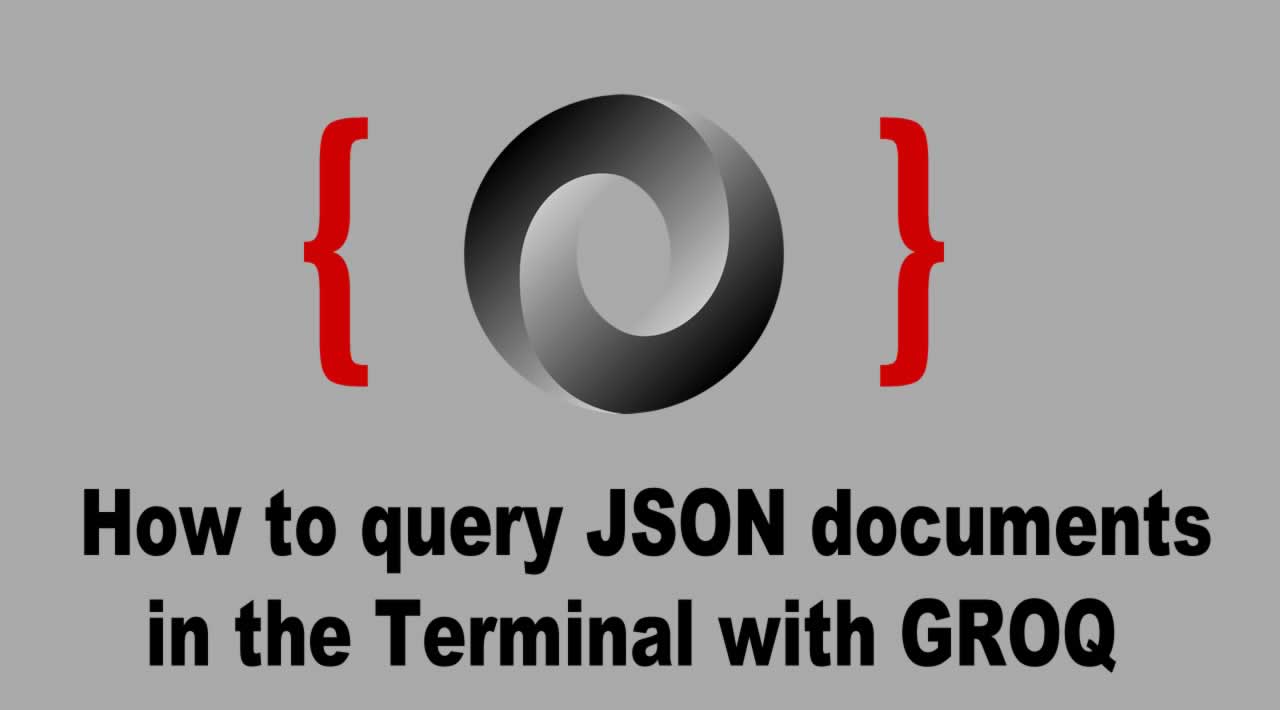 JSON documents are everywhere today, but they are rarely structured the way you want them to be. They often include too much data, have weirdly named fields, or place the data in unnecessary nested objects. Graph-Relational Object Queries (GROQ) is a query language (like SQL, but different) which is designed to work directly on JSON documents. It basically lets you write queries you can quickly filter and then reformat JSON documents to get them into the most convenient shape.

GROQ was developed by Sanity.io (where it’s used as the primary query language). It’s open source and it gives us built-in ways to use it in JavaScript and the command line on any JSON source. Together, we’ll add GROQ to the terminal toolkit, which will save you time whenever you need to wrangle some JSON data on a poject.

Like most things, we need to install the GROQ CLI tool and can do so with with npm (or Yarn) in the terminal:

In order to play with it, we need to have a JSON file available. We’ll use curl to download an example dataset of todo data:

Let’s take a quick look at a sample item in the data:

Pretty straightforward. We have a user ID, a todo item ID, a todo title and a boolean specifying whether the todo item is completed or not.

Now let’s run a basic GROQ query: finding all completed todos, but only return the todo titles and user IDs. It’s OK to copy/paste this line because we’ll walk through what it means in a bit.

The groq command line tools accept a JSON document on standard input. This works very nicely with the Unix philosophy of “doing one thing and work on a text stream.” In order to read JSON from a file we’ll use the cat command. Also note that groq will output a minimal JSON on a single line by default, but by passing --pretty, we get a nicely indented and highlighted syntax.

To store the result, we can pipe it to a new file using >:

The query itself consists of three parts:

Let’s warm up with some exercises

You probably didn’t think you’d need to exercise to get through this post! Well, the good news is that we’re only exercising the mind with a few things to try out with GROQ before we get into more details.

We’ll put the answers at the end of the post for you to reference.

The todo data is nice for a warmup, but let’s be honest: It’s not very motivating to look at a list that uses Latin as placeholder content. However, the Nobel Prize has a dataset of all past laureates available to use publicly.

Ah! This is much more interesting! Let’s download the dataset and find the first name of all Norwegian laureates. Here, we’re going to use --output flag for curl to save the data to a file.

What do you get back? I received 12 Norwegian Nobel laureates. Not bad!

Note that this query is not quite like the first query we wrote. We have an extra .laureates in this one. When we used * in the todo dataset, it represents the whole JSON document which is contained in an array at the top-level of the todo dataset. On the other hand, the laureate file uses an object at the top-level where the list of laureates is stored in the "laureates" property.

To access a specific item, we can use the filter [0] and return just the first name. That ought to tell us who the first Norwegian was to win a Nobel prize.

We’d be remiss not to play around with this new dataset a bit to see how the queries work.

Now we know that in total there have been 12 Norwegian Nobel laureates, how many of them were born after 1950? That’s no problem figuring out with GROQ

You know the drill: try playing with filters a bit to see how they work with the dataset. Answers are at the end, of course.

The Nobel Prize dataset separates the first name and the surname for each laureate, but what if we want to combine them together into one field? Projections in GROQ can do exactly that!

Running this query tells us that May-Britt Moser and Edvard Moser received one prize (which was, in fact, the same prize):

What happened here? Well, when we write a projection in GROQ what we’re really writing is a JSON object. Previously, we had simple projections (like {firstname}), but this is a shortcut way of writing {"firstname": firstname}. By using the expanded object syntax, we can both rename keys and transform the values.

Hopefully, you’re getting a good feel for things at this point, but here are some more ways to practice working with projections:

1.Find all laureates who have won two or more prizes.

Doing more at once

Catch that? A GROQ query doesn’t have to start with *. In this query, we’re creating a JSON object where the values are results from separate queries. This provides a lot of flexibility in what we can produce with GROQ. Maybe you want the total number of incomplete todos together with a list of the five last ones. Or maybe you want to split the todos into two separate lists: one for completed and one for incomplete. Or maybe you need to wrap everything inside an object because that is what another tool/library/framework expects. Whatever the case, GROQ has you covered.

Let’s try one last exercise. Can you project an object where laureates contains an array with a rounded percentage of the total number of prizes that each laureate has run, returning the laureates’ first name? Then, try outputting the total number handed out.

There isn’t much you need to learn before getting some good use out of GROQ. If you have followed the exercises, you’re on a great path to becoming a GROQ guru. Naturally, this introduction doesn’t touch on all the different features and aspects of GROQ, so feel free to explore the specification and the project itself on GitHub.

JSON Parsing in Android - What is JSON, Comparison betwen JSON and XML, JSON parsing step by step implementation and functions.

Before we get started with how to use JSON with Python, we’ll take a look at “What is JSON?”.The JSON stands for JavaScript Object Notation.

Introduction to JSON will provide in-depth knowledge about the data interchange operator. It will help you understand the basics and fundamentals of JSON and why it is preferred over XML.

Set the JSON body from an external JSON file in Postman

In this short tutorial, I will show you how to get your entire JSON request body from an external file. This can be particularly useful if you want to use di...