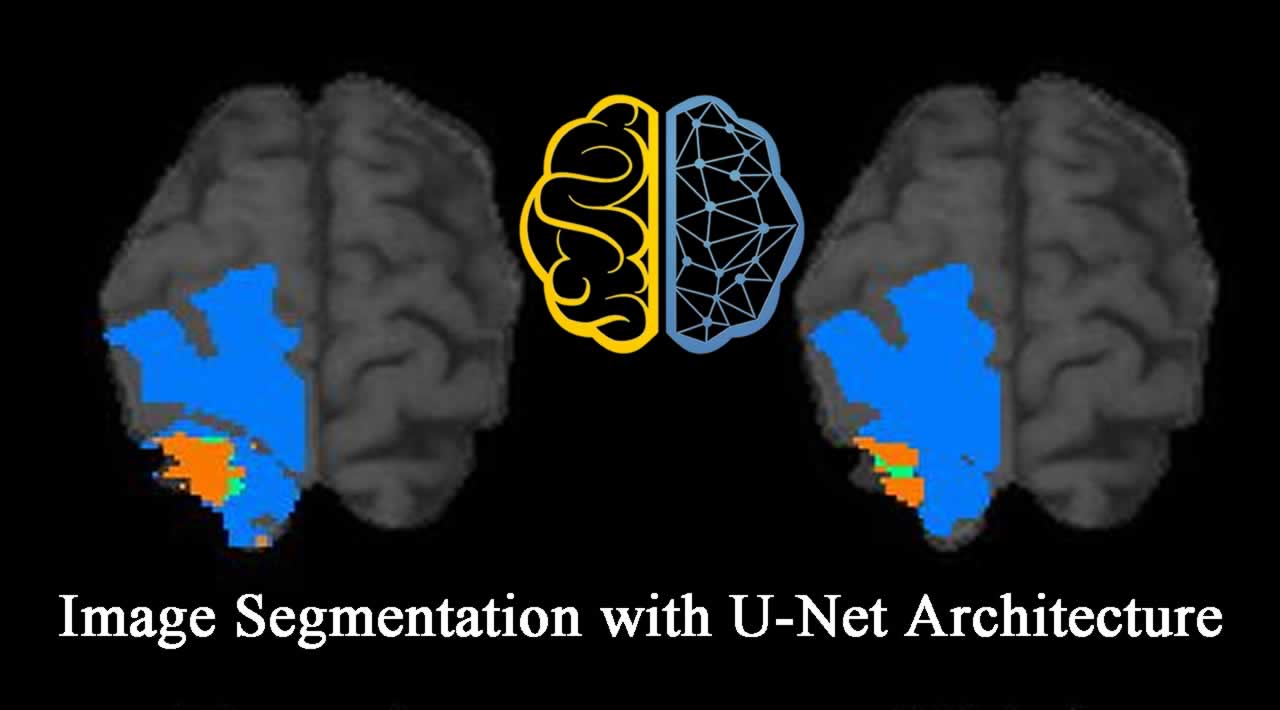 U-Net is more successful than conventional models, in terms of architecture and in term pixel-based image segmentation formed from convolutional neural network layers. Now, we learn about using U-Net Architecture for Image Segmentation in Deep Learning

Why segmentation is needed and what U-Net offers?

Basically, segmentation is a process that partitions an image into regions. It is an image processing approach that allows us to separate objects and textures in images. Segmentation is especially preferred in applications such as remote sensing or tumor detection in biomedicine.

There are many traditional ways of doing this. For example; point, line, and edge detection methods, thresholding, region-based, pixel-based clustering, morphological approaches, etc. Various methods have been developed for segmentation with convolutional neural networks (a common deep learning architecture), which have become indispensable in tackling more advanced challenges with image segmentation. In this post, we’ll take a closer look at one such architecture: u-net.

In Deep learning, it’s known that we need large datasets for model training. But there are some problems we run into at this point! We often cannot afford the amount of data that needs to be collected for an object classification problem. In this context, affordability means time, money, and most importantly, hardware.

For example, it isn’t possible to collect many biomedical images with the camera on your mobile phone. So we need more systematic ways to collect data. There’s also the data labeling process, for which a single developer/engineer will not suffice—this will require a lot of expertise and experience in classifying the relevant images. This is especially true with highly-specialized areas such as medical diagnostics.

Another critical point is to provide education about the general image in classically convolutional neural networks through class labels. However, some problems require knowledge of localization/positioning with pixel-based approaches. In areas that require sensitive approaches, such as biomedical or defense, we need class information for each pixel.

U-Net is more successful than conventional models, in terms of architecture and in terms pixel-based image segmentation formed from convolutional neural network layers. It’s even effective with limited dataset images. The presentation of this architecture was first realized through the analysis of biomedical images.

As it’s commonly known, the dimension reduction process in the height and width that we apply throughout the convolutional neural network—that is, the pooling layer — is applied in the form of a dimension increase in the second half of the model.

The pooling layer reduces height and width information by keeping the number of channels of the input matrix constant. The calculation is a step used to reduce complexity (Each element of the image matrix is called a pixel). In summary, the pooling layer refers to a pixel that represents groups of pixels.

These layers are intended to increase the resolution of the output. For localization, the sampled output is combined with high-resolution features throughout the model. A sequential convolution layer then aims to produce a more precise output based on this information.

U-Net takes its name from the architecture, which when visualized, appears similar to the letter U, as shown in the figure above. Input images are obtained as a segmented output map. The most special aspect of the architecture in the second half. The network does not have a fully-connected layer. Only the convolution layers are used. Each standard convolution process is activated by a ReLU activation function.

U-Net consists of a contracting path (left side) and an expansive path (right side)!

The pixels in the border region are symmetrically added around the image so that images can be segmented continuously. With this strategy, the image is segmented completely. The padding (pixel adding) method is important for applying the U-Net model to large images; otherwise, the resolution will be limited by the capacity of the GPU memory. The result of padding and segmenting with the mirroring I mentioned is shown in the figure below.

The difference between U-Net and the autoencoder architecture

To help highlight what makes U-Net unique, it might be helpful to quickly compare it to a different traditional approach to image segmentation: the autoencoder architecture.

In a classical autoencoder architecture, the size of the input information is initially reduced, along with the following layers.

This architecture is ideal in preserving the output size, but one problem is that it compresses the input linearly, which results in a bottleneck in which all features cannot be transmitted.

This is where U-Net differs. U-Net performs deconvolution on the decoder side (i.e. in the second half) and, in addition, can overcome this bottleneck problem, which results in the loss of features through connections from the encoder side of the architecture.

Let’s return to our specific use case at hand—biomedical image segmentation. The most common variation in tissue in a biomedical image is deformation, and realistic deformations can be efficiently simulated. In this way, the learning process is more successful with the elastic deformation approach, which helps us increase the size of our dataset.

In addition, it’s difficult to determine the boundaries when there are parts of the same class that touches each other. For this purpose, it’s recommended to use the values that have a large weight in the loss function, while separating the information to be segmented from the background first.

Loss can be calculated by standard binary cross-entropy and Dice loss, which is a frequently-used performance criterion for assessing success in biomedical images.

Is a pixel-based criterion and is often used when evaluating segmentation performance.

The varying pixel ratio between the target matrix and the resulting matrix is considered. This metric is also associated with the Dice calculation.

Input and image labeled by input

Here’s a look at how U-Net performs on EM image segmentation, as compared to other approaches:

Here is the U-Net

Results from PhC-U373 and DIC-HeLa datasets and comparison with previous studies:

Of course, segmentation isn’t only used for medical images; earth sciences or remote sensing systems from satellite imagery also use segmentation, as do autonomous vehicle systems. After all, there are patterns everywhere.

Professional seismic imaging requires expert interpretation of salt bodies. This leads to very subjective, variable predictions. To generate the most accurate seismic images and 3D imaging, TGS (geology data company) hopes that Kaggle’s machine learning community can create an algorithm that automatically and accurately determines whether an underground target is a salt.

Here are some examples of successful u-net approaches:

The determination of map regions by using satellite imagery is another u-net application area. In fact, it can be said that the applications that will emerge with the development of this field will greatly facilitate the work of mapping and environmental engineers.

We can use this method not only for defense industry applications but also for urban district planning applications. For example, in the competition for the detection of buildings, mean accuracy of 0.943 and mean sensitivity of 0.954 is reached. You can see the u-net model of this successful study here. 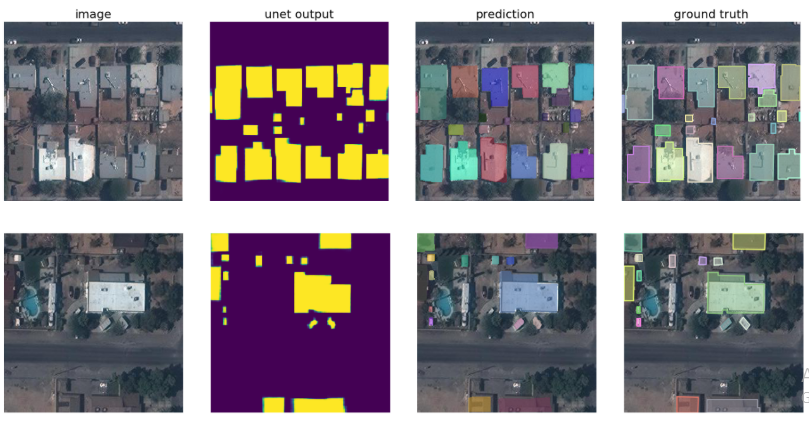 Result of the Mapping Challenge — Neptune.ML

U-net inspired the combination of different architectures as well as other computer vision deep learning models.

For example, the ResNet of ResNet (RoR) concept is one of them. The structure, which can be defined as the second half of the u-net architecture, is applied to the skip connections in classical residual networks.

As can be seen from the classic ResNet model architecture, each blue block has a skip connection. In the RoR approach, new connections are added from the input to the output via the previous connections. There are different versions of RoR as in ResNet. Take a look at the various references at the end of this post if you want to examine the details.

Segmenting images can be a challenging problem, especially when lacking enough high- and low-resolution data. It’s an area where new approaches can be developed by evaluating different, current, and old approaches.

Remember, biomedical imaging isn’t the only use case!

Other areas of application for segmentation include geology, geophysics, environmental engineering, mapping, and remote sensing, including various autonomous tools.

Thanks for reading. keep visiting!

Changing Image Backgrounds Using Image Segmentation. Make the world your green screen. Hello readers! In this article I’ll be discussing another cool trick we can do with deep learning.

During my studies at JKU there was a task for preprocessing images for a machine learning project. It is necessary to clean the raw images…

Being a practitioner in Machine Learning, you must have gone through an image classification, where the goal is to assign a label or a class to the input image.