In this post, we will understand the below core concepts of Object oriented Programming in the following sequence:

In OOP, computer programs are designed in such a way where everything is an object that interact with one another. Inheritance is one such concept where the properties of one class can be inherited by the other. It helps to reuse the code and establish a relationship between different classes. 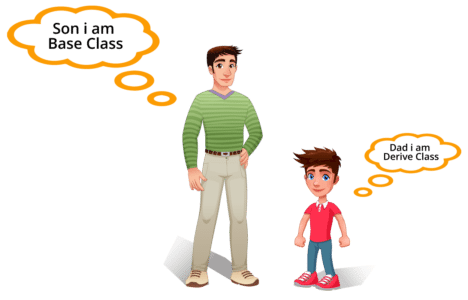 As we can see in the image, a child inherits the properties from his father. Similarly, in Java, there are two classes:

1. Parent class ( Super or Base class)

Inheritance is further classified into 4 types:

So let’s begin with the first type of inheritance i.e. Single Inheritance:

In single inheritance, one class inherits the properties of another. It enables a derived class to inherit the properties and behavior from a single parent class. This will in turn enable code reusability as well as add new features to the existing code.

Here, Class A is your parent class and Class B is your child class which inherits the properties and behavior of the parent class.

When a class is derived from a class which is also derived from another class, i.e. a class having more than one parent class but at different levels, such type of inheritance is called Multilevel Inheritance.

Let’s see the syntax for multilevel inheritance in Java: 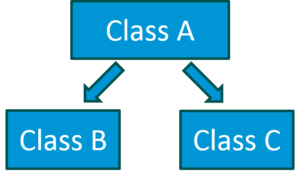 If we talk about the flowchart, Class B and C are the child classes which are inheriting from the parent class i.e Class A.

Let’s see the syntax for hierarchical inheritance in Java:

Now we have learned about inheritance and their different types. Let’s switch to another object oriented programming concept i.e Encapsulation.

Encapsulation is a mechanism where you bind your data and code together as a single unit. It also means to hide your data in order to make it safe from any modification. What does this mean? The best way to understand encapsulation is to look at the example of a medical capsule, where the drug is always safe inside the capsule. Similarly, through encapsulation the methods and variables of a class are well hidden and safe.

We can achieve encapsulation in Java by:

Let us look at the code below to get a better understanding of encapsulation:

Abstraction refers to the quality of dealing with ideas rather than events. It basically deals with hiding the details and showing the essential things to the user. If you look at the image here, whenever we get a call, we get an option to either pick it up or just reject it. But in reality, there is a lot of code that runs in the background. So you don’t know the internal processing of how a call is generated, that’s the beauty of abstraction. Therefore, abstraction helps to reduce complexity. You can achieve abstraction in two ways:

Let’s look at the syntax of an abstract class:

Interface: Interface in Java is a blueprint of a class or you can say it is a collection of abstract methods and static constants. In an interface, each method is public and abstract but it does not contain any constructor. Along with abstraction, interface also helps to achieve multiple inheritance in Java.

These methods need be present for every car, right? But their working is going to be different.

Let’s say you are working with manual car, there you have to increment the gear one by one, but if you are working with an automatic car, that time your system decides how to change gear with respect to speed. Therefore, not all my subclasses have the same logic written for change gear. The same case is for speedup, now let’s say when you press an accelerator, it speeds up at the rate of 10kms or 15kms. But suppose, someone else is driving a super car, where it increment by 30kms or 50kms. Again the logic varies. Similarly for applybrakes, where one person may have powerful brakes, other may not.

Since all the functionalities are common with all my subclasses, I have created an interface ‘ParentCar’ where all the functions are present. After that, I will create a child class which implements this interface, where the definition to all these method varies.

Next, let’s look into the functionality as to how you can implement this interface.

So to implement this interface, the name of your class would change to any particular brand of a Car, let’s say I’ll take an “Audi”. To implement the class interface, I will use the ‘implement’ keyword as seen below:

Here as you can see, I have provided functionalities to the different methods I have declared in my interface class. Implementing an interface allows a class to become more formal about the behavior it promises to provide. You can create another class as well, say for example BMW class which can inherit the same interface ‘car’ with different functionalities.

So I hope you guys are clear with the interface and how you can achieve abstraction using it.

Polymorphism means taking many forms, where ‘poly’ means many and ‘morph’ means forms. It is the ability of a variable, function or object to take on multiple forms. In other words, polymorphism allows you define one interface or method and have multiple implementations.

Let’s understand this by taking a real-life example and how this concept fits into Object oriented programming. 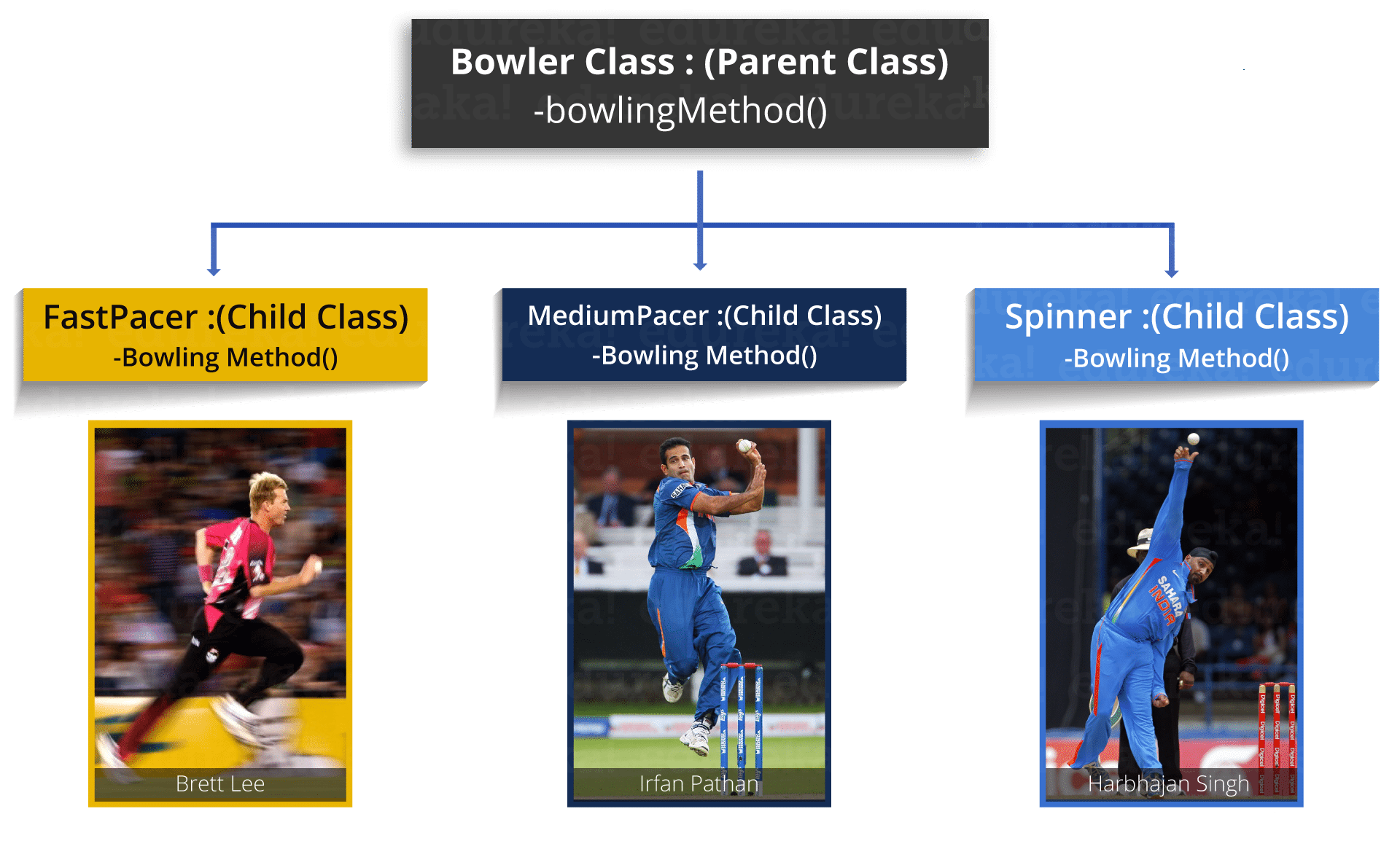 Let’s consider this real world scenario in cricket, we know that there are different types of bowlers i.e. Fast bowlers, Medium pace bowlers and spinners. As you can see in the above figure, there is a parent class- BowlerClass and it has three child classes: FastPacer, MediumPacer and Spinner. Bowler class has bowlingMethod() where all the child classes are inheriting this method. As we all know that a fast bowler will going to bowl differently as compared to medium pacer and spinner in terms of bowling speed, long run up and way of bowling, etc. Similarly a medium pacer’s implementation of bowlingMethod() is also going to be different as compared to other bowlers. And same happens with spinner class.

The point of above discussion is simply that a same name tends to multiple forms. All the three classes above inherited the bowlingMethod() but their implementation is totally different from one another.

Polymorphism in Java is of two types:

Let us look at the following code to understand how the method overloading works:

I hope you guys are clear with all the object oriented programming concepts that we have discussed above i.e inheritance, encapsulation, abstraction and polymorphism. Now you can make your Java application more secure, simple and re-usable using Java OOPs concepts. 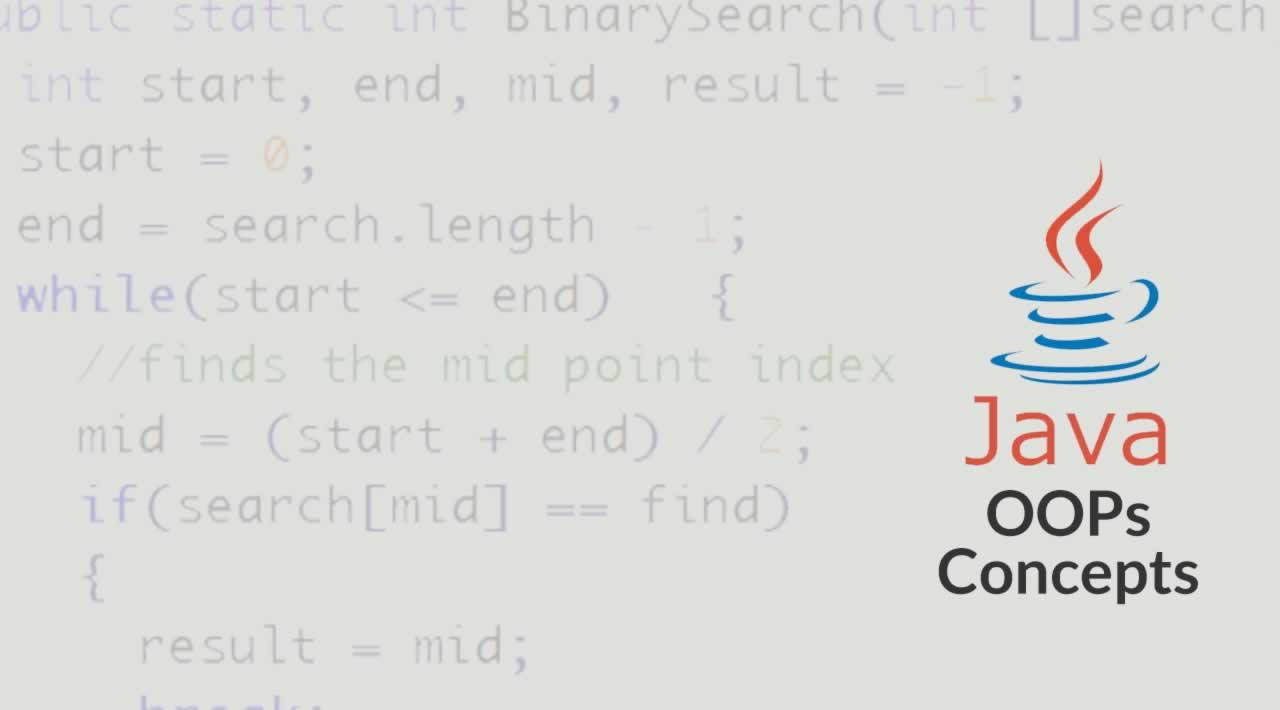