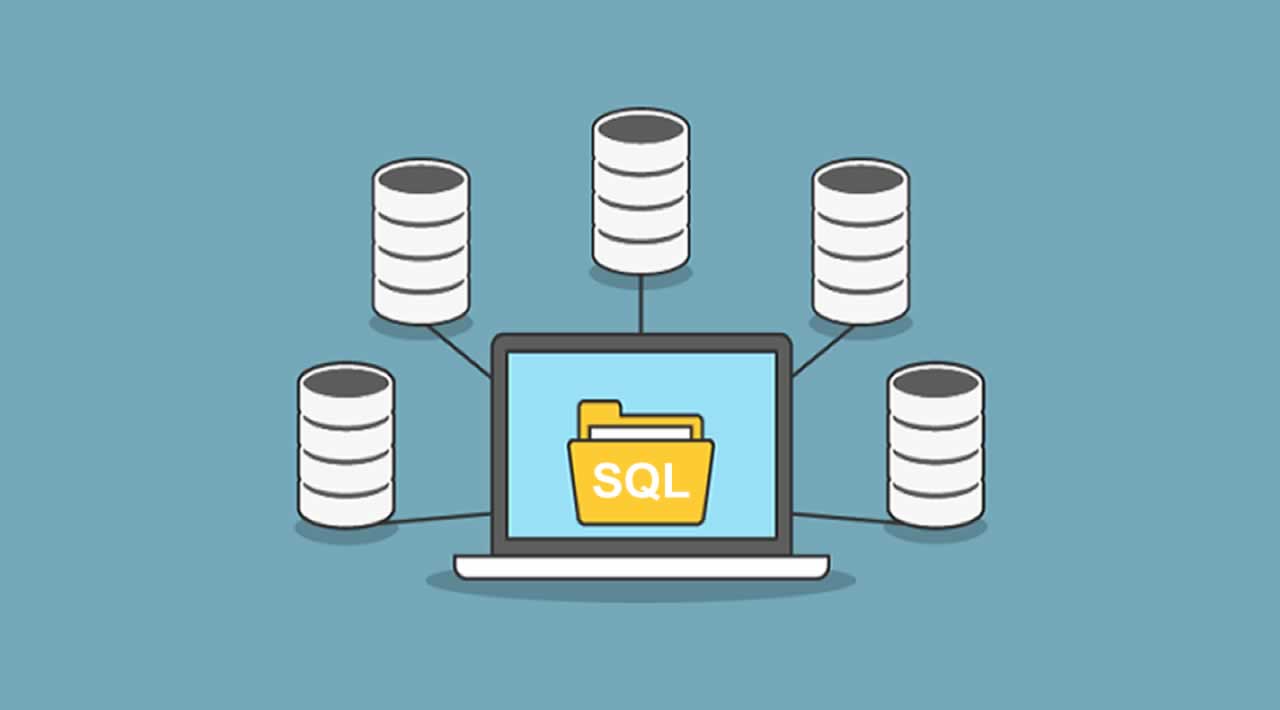 SQL Database Performance Tuning for Developers - SQL performance tuning can be an incredibly difficult task, particularly when working with large-scale data where even the most minor change can have a dramatic (positive or negative) impact on performance...

SQL Database Performance Tuning for Developers - SQL performance tuning can be an incredibly difficult task, particularly when working with large-scale data where even the most minor change can have a dramatic (positive or negative) impact on performance...

In mid-sized and large companies, most SQL performance tuning will be handled by a Database Administrator (DBA). But believe me, there are plenty of developers out there who have to perform DBA-like tasks. Further, in many of the companies I’ve seen that do have DBAs, they often struggle to work well with developers—the positions simply require different modes of problem solving, which can lead to disagreement among coworkers.

When working with large-scale data, even the most minor change can have a dramatic impact on performance.

On top of that, corporate structure can also play a role. Say the DBA team is placed on the 10th floor with all of their databases, while the devs are on the 15th floor, or even in a different building under a completely separate reporting structure—it’s certainly hard to work together smoothly under these conditions.   In this article, I’d like to accomplish two things:

If you’re a complete newcomer to databases and even asking yourself “What is SQL performance tuning?”, you should know that indexing is an effective way to tune your SQL database that is often neglected during development. In basic terms, an index is a data structure that improves the speed of data retrieval operations on a database table by providing rapid random lookups and efficient access of ordered records. This means that once you’ve created an index, you can select or sort your rows faster than before.

Indexes are also used to define a primary-key or unique index which will guarantee that no other columns have the same values. Of course, database indexing is a vast an interesting topic to which I can’t do justice with this brief description (but here’s a more detailed write-up).

If you’re new to indexes, I recommend using this diagram when structuring your queries:   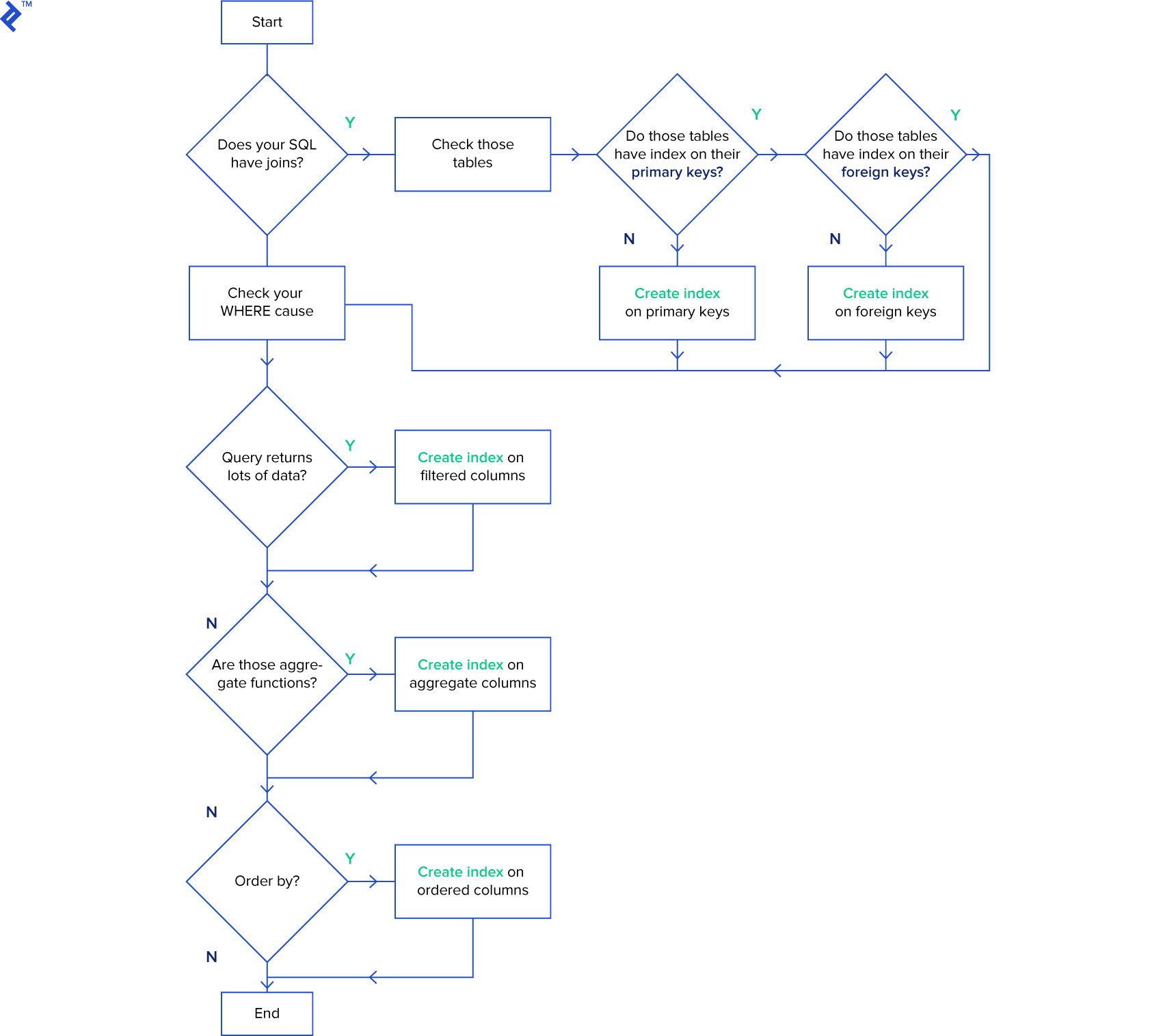 Basically, the goal is to index the major searching and ordering columns.

Note that if your tables are constantly hammered by INSERT, UPDATE, and DELETE, you should be careful when indexing—you could end up decreasing performance as all indexes need to be modified after these operations.

Further, DBAs often drop their SQL indexes before performing batch inserts of million-plus rows to speed up the insertion process. After the batch is inserted, they then recreate the indexes. Remember, however, that dropping indexes will affect every query running in that table; so this approach is only recommended when working with a single, large insertion.

By the way: the Execution Plan tool in SQL Server can be useful for creating indexes.

Its main function is to graphically display the data retrieval methods chosen by the SQL Server query optimizer. If you’ve never seen them before, there’s a detailed walkthrough.

Afterwards, a third tab named “Execution Plan” will appear. You might see a detected missing index. To create it, just right click in the execution plan and choose the “Missing Index Details…”. It’s as simple as that!

Imagine a scenario in which 1000 queries hammer your database in sequence. Something like:

You should avoid such loops in your code. For example, we could transform the above snippet by using a unique INSERT or UPDATE statement with multiple rows and values:

Make sure that your WHERE clause avoids updating the stored value if it matches the existing value. Such a trivial optimization can dramatically increase SQL query performance by updating only hundreds of rows instead of thousands. For example:

A correlated subquery is one which uses values from the parent query. This kind of SQL query tends to run row-by-row, once for each row returned by the outer query, and thus decreases SQL query performance. New SQL developers are often caught structuring their queries in this way—because it’s usually the easy route.

Here’s an example of a correlated subquery:

A more efficient SQL performance tuning technique would be to refactor the correlated subquery as a join:

In this case, we go over the Company table just once, at the start, and JOIN it with the Customertable. From then on, we can select the values we need (co.CompanyName) more efficiently.

One of my favorite SQL optimization tips is to avoid SELECT *! Instead, you should individually include the specific columns that you need. Again, this sounds simple, but I see this error all over the place. Consider a table with hundreds of columns and millions of rows—if your application only really needs a few columns, there’s no sense in querying for all the data. It’s a massive waste of resources. (For more issues, see *[here](http://stackoverflow.com/questions/3639861/why-is-select-considered-harmful#answer-3639964 "here*").)

If you really need every column, explicitly list every column. This isn’t so much a rule, but rather, a means of preventing future system errors and additional SQL performance tuning. For example, if you’re using an INSERT... SELECT... and the source table has changed via the addition of a new column, you might run into issues, even if that column isn’t needed by the destination table, e.g.:

To avoid this kind of error from SQL Server, you should declare each column individually:

Note, however, that there are some situations where the use of SELECT * could be appropriate. For example, with temp tables—which leads us to our next topic.

SQL Tuning: The Wise Use of Temporary Tables (#Temp)

Temporary tables usually increase a query’s complexity. If your code can be written in a simple, straightforward manner, I’d suggest avoiding temp tables.

But if you have a stored procedure with some data manipulation that cannot be handled with a single query, you can use temp tables as intermediaries to help you to generate a final result.

When you have to join a large table and there are conditions on said table, you can increase database performance by transferring your data in a temp table, and then making a join on that. Your temp table will have fewer rows than the original (large) table, so the join will finish faster!

The decision isn’t always straightforward, but this example will give you a sense for situations in which you might want to use temp tables:

Imagine a customer table with millions of records. You have to make a join on a specific region. You can achieve this by using a SELECT INTO statement and then joining with the temp table:

(Note: some SQL developers also avoid using *```SELECT INTO``` to create temp tables, saying that this command locks the tempdb database, disallowing other users from creating temp tables. Fortunately, this is [fixed in 7.0 and later](http://stackoverflow.com/questions/1302670/sql-server-select-into-and-blocking-with-temp-tables#answer-1302787 "fixed in 7.0 and later*").)

As an alternative to temp tables, you might consider using a subquery as a table:

But wait! There’s a problem with this second query. As described above, we should only be including the columns we need in our subquery (i.e., not using SELECT *). Taking that into account:

All of these SQL snippets will return the same data. But with temp tables, we could, for example, create an index in the temp table to improve performance. There’s some good discussion here on the differences between temporary tables and subqueries.

Finally, when you’re done with your temp table, delete it to clear tempdb resources, rather than just wait for it to be automatically deleted (as it will be when your connection to the database is terminated):

SQL Tuning: “Does My Record Exist?”

This SQL optimization technique concerns the use of EXISTS(). If you want to check if a record exists, use EXISTS() instead of COUNT(). While COUNT() scans the entire table, counting up all entries matching your condition, EXISTS() will exit as soon as it sees the result it needs. This will give you better performance and clearer code.

As DBAs working with SQL Server 2016 are likely aware, the version marked an important shift in defaults and compatibility management. As a major version, it, of course, comes with new query optimizations, but control over whether they’re used is now streamlined via sys.databases.compatibility_level.

SQL Performance Tuning (in the Office)

SQL database administrators (DBAs) and developers often clash over data- and non-data-related issues. Drawn from my experience, here are some tips (for both parties) on how to get along and work together effectively.