Visual Studio includes a straightforward clone experience. If you know the URL of the repository that you would like to clone, you can paste the URL in the Repository location section and then choose the disk location you would like Visual Studio to clone to.
Git is now the default version control experience in Visual Studio 2019. Since version 16.6, we’ve worked on building out the feature set and iterating on it based on your feedback. The new Git experience is turned on by default for everyone with the release of version 16.8.
When you clone a repository or open a local repository, Visual Studio switches you into that Git context by saving and closing any previously open solutions and projects. Solution Explorer loads the folder at the root of the Git repository and scans the directory tree for any View files. These include files such as CMakeLists.txt or those with the .sln file extension.

Visual Studio adjusts its View based on which View file you load in Solution Explorer: 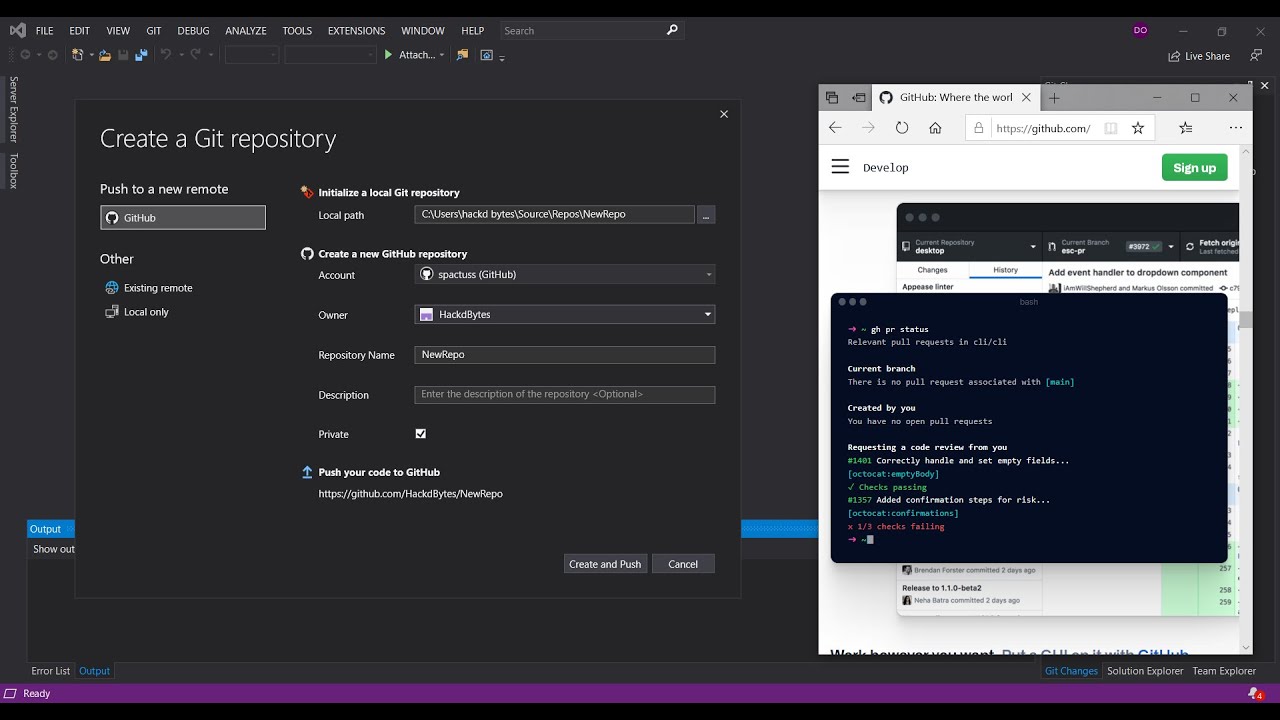 The new Windows Terminal has arrived on Visual Studio 2019 16.6 for Windows and Visual Studio 8.6 for Mac. In this article I will show how to enhance it with posh-git for a better experience with GIT commands.

posh-git is a PowerShell environment for Git that provides powerful tab-completion facilities, as well as an enhanced prompt to help you stay on top of your repository status. Because The new terminal is compatible with PowerShell (and also classical command prompt) we are able to use them together for a better experience with GIT. Here is a tutorial to install it:

First, set the value of ExecutionPolicy to RemoteSigned for all users use the next command:

Then install it from the PowerShell gallery:

At least update your PowerShell prompt with the following command:

You can find here more documentation about it: https://github.com/dahlbyk/posh-git

Now you can open a new Windows Terminal from the menu here:

Visual Studio includes a straightforward clone experience. If you know the URL of the repository that you would like to clone, you can paste the URL in the Repository location section and then choose the disk location you would like Visual Studio to clone to.
Git is now the default version control experience in Visual Studio 2019. Since version 16.6, we’ve worked on building out the feature set and iterating on it based on your feedback. The new Git experience is turned on by default for everyone with the release of version 16.8.
When you clone a repository or open a local repository, Visual Studio switches you into that Git context by saving and closing any previously open solutions and projects. Solution Explorer loads the folder at the root of the Git repository and scans the directory tree for any View files. These include files such as CMakeLists.txt or those with the .sln file extension.

Visual Studio adjusts its View based on which View file you load in Solution Explorer: UPDATE: The book giveaway challenge is complete. We will be announcing winners on the Visual Studio blog within the next week. Thank you for your submissions!

Visual Studio v16.7 Preview 2 delivers various improvements in the C++ space. Within the Connection Manager, you’re now able to edit remote SSH connections, e.g. if the IP address of your target system changes and needs to be updated. You’re also able to set default remote connections to be consumed via **${defaultRemoteMachineName} **in CMakeSettings.json and launch.vs.json. 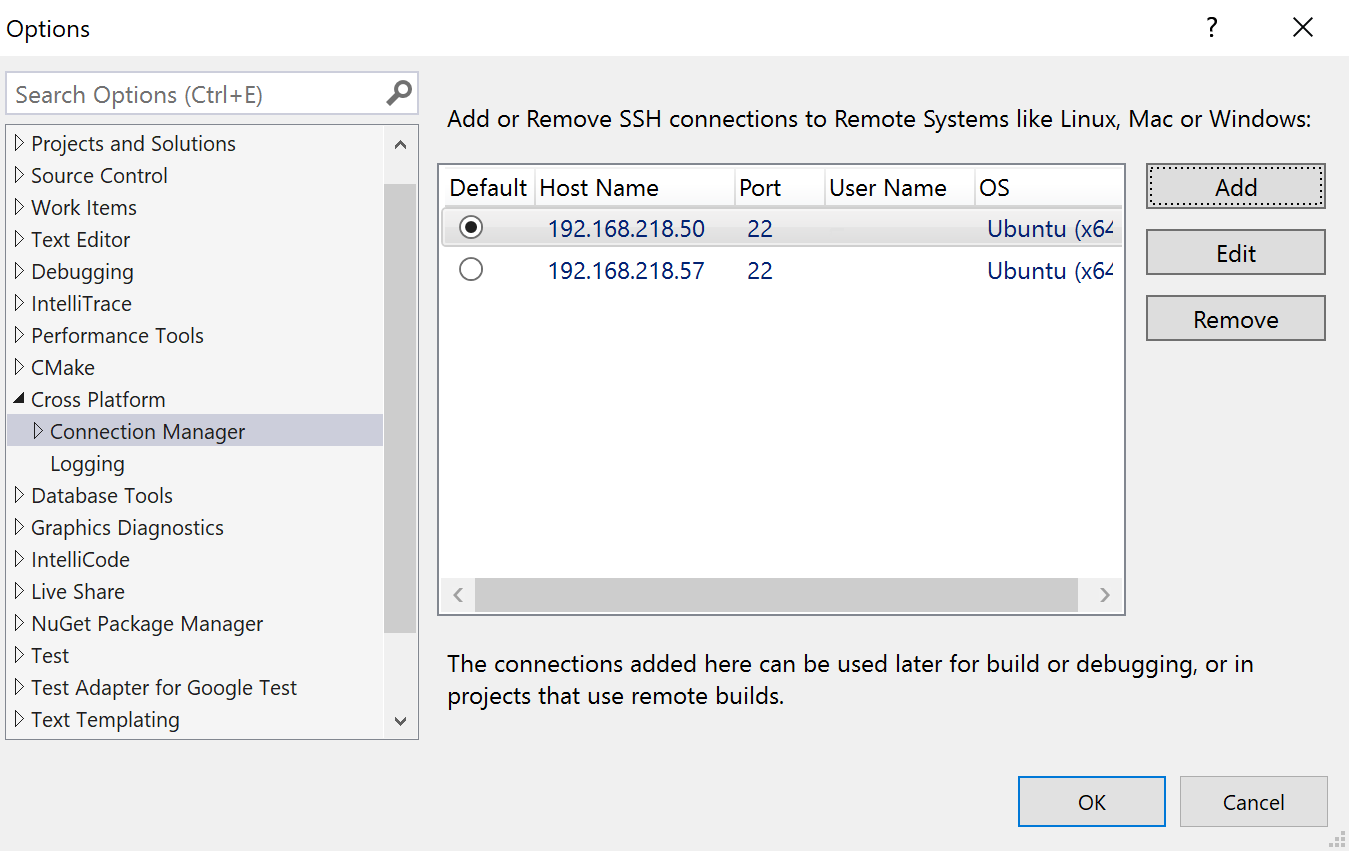 Exciting new updates to the Git experience in Visual Studio

We’ve seen a lot of enthusiasm in the past few months with the improvements we’ve been making to the Git integration for Visual Studio 2019. We’ve also received a healthy amount of good feedback that’s helped us focus our efforts. We first announced the new changes in a blog post in March. Since then, the team has been hard at work analyzing the feedback, polishing the user interface, and building more features. We’re excited to share those updates with you today.

You can turn the experience off using the same checkbox.

As we talked to customers about the pain points they face when working with source control, we consistently heard about the frustration with merge conflicts. When you get a merge conflict, it interrupts your coding flow and forces you to switch context. We also realized we needed better messaging to indicate you encountered a conflict during a Git pull operation. To address these concerns, the Git Changes tool window now clearly lists unmerged changes and displays a status message specifying that conflict resolution is in progress. In addition, in our user studies, as we walked through different workflows, we noticed that not all developers always have the Git Changes window open. If you don’t, you’ll only see the file with conflict indicators and may try to manually resolve the conflicts in-line. We all know how painful that can be, especially for large files with many conflicts. So, we added a gold info bar at the document level to notify you when the file contains conflicts, prompting you to open the Merge Editor.

The three-way Merge Editor has undergone quite a revamp based on ongoing customer feedback. We’ve changed the legacy TFVC terminology of _Source _and _Target _to _Incoming _and Current with a strong emphasis on the branch name. This used to be a constant point of confusion. Incoming and Current also each have a new checkbox to take all changes from either version with a single click.

Incoming / Current and branch names in the Merge Editor headings

The Merge Editor now makes it easier to parse conflicts by better aligning matching lines, displaying word level differences, and making differing whitespace visible. We’ve also reduced the clutter around the zoom margin, health margin, and toolbar. Further, you can turn off non-conflicting differences to just focus on the conflicts. And if you don’t need the horsepower of the Merge Editor, such as in Add/Add conflicts, you can resolve those now at the file level with a two-way merge.

After we launched the first version of the Git Changes tool window, we wanted to make sure we incorporated community feedback and suggestions as we iterated on the experience. Our research informed us there are specific Git operations most of you perform while coding that made sense in the Git Changes window adjacent to your editor. But other times, you need a full-screen experience to focus on a dedicated Git activity. So, in Version 16.7 Preview 3, we built the _Git Repository _window, the future home for all your Git related activities. It’s now available in Visual Studio Preview, with some initial functionality.

First, we built an interactive branch tree where you can manage all the branches in the repository in a single view. From here you can use the context menu to Fetch, Pull, and Push branches without having to check them out. You can also create a new branch directly from any local or remote branch. We’ve also added the commands to Reset, Cherry-Pick, and Unset Upstream Branch, which weren’t available in the Git Changes branch picker.

In addition to using the power-packed context menu, you can also double click a branch in the list to show you its history in the right pane. At the top of the graph, you can see incoming commits after performing Fetch. Soon, you’ll be able to see outgoing commits as well. Double clicking on a commit will open its metadata in the Commit Details pane. You can access this window through the_ Manage Branches_ command in the Git menu as well as the Unpushed Commits button in the Status Bar.

This is just the first iteration of the Git Repository window and we will continue to build more features into it. But in the meantime, we’re eager for you all to try it out and let us know what you think.

Manage branches and view history from the Git Repository window

You can now create a new repository on GitHub, Azure Repos, or any remote URL at any time, even from an empty folder. Visual Studio will help you initialize the new repository locally as well as push it to your remote GitHub account. Use the existing remote option to push your code to a hosted Git repository you’ve already created.

Create a new repository and push it to GitHub

It’s super important to be able to personalize and customize your Git settings at a repository level as well as at a global level. We’ve migrated all your settings to Tools – Options – Source Control.