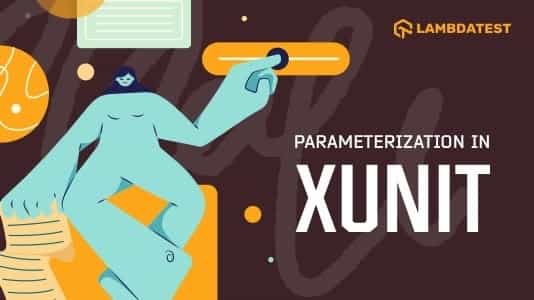 In this ongoing xUnit tutorial, we have already seen how to run the first script in xUnit. In this tutorial we will see some of the ways to implement xUnit parameterized tests using the Theory attribute and other popular attributes that enable parameterization:

When a developer comes up with unit tests, there are multiple ways through which they try to optimize the test code. Reduction of code size by reusing the existing code is one way of achieving the same. While working with frameworks like xUnit, Test fixtures can be streamlined by devising data-driven tests or xUnit parameterized tests, thereby taking advantage of code reusability.

Like other popular test frameworks in C#, the xUnit framework also supports parameterized and non-parameterized tests for Selenium testing. The Fact attribute in xUnit denotes a test method that does not take any input arguments. On the other hand, the Theory attribute specifies a test that can take input parameters, and the method can be tested against different input combinations.

You can refer to our earlier blogs on the xUnit framework if you want to get started with automated browser testing using that framework. Parameterized tests in xUnit can be created using Theory tests, which can be used along with attributes like InlineData, ClassData, and MemberData to pass data into the test methods.

What Is Selenium? How Selenium Works? Selenium Basics & More

In this WebDriverIO tutorial on alert handling in Selenium, I’ll show you how to handle alerts and pop-ups as well as overlay modal in WebDriverIO.