Angular vs React vs Vue: Which one will be popular in 2020 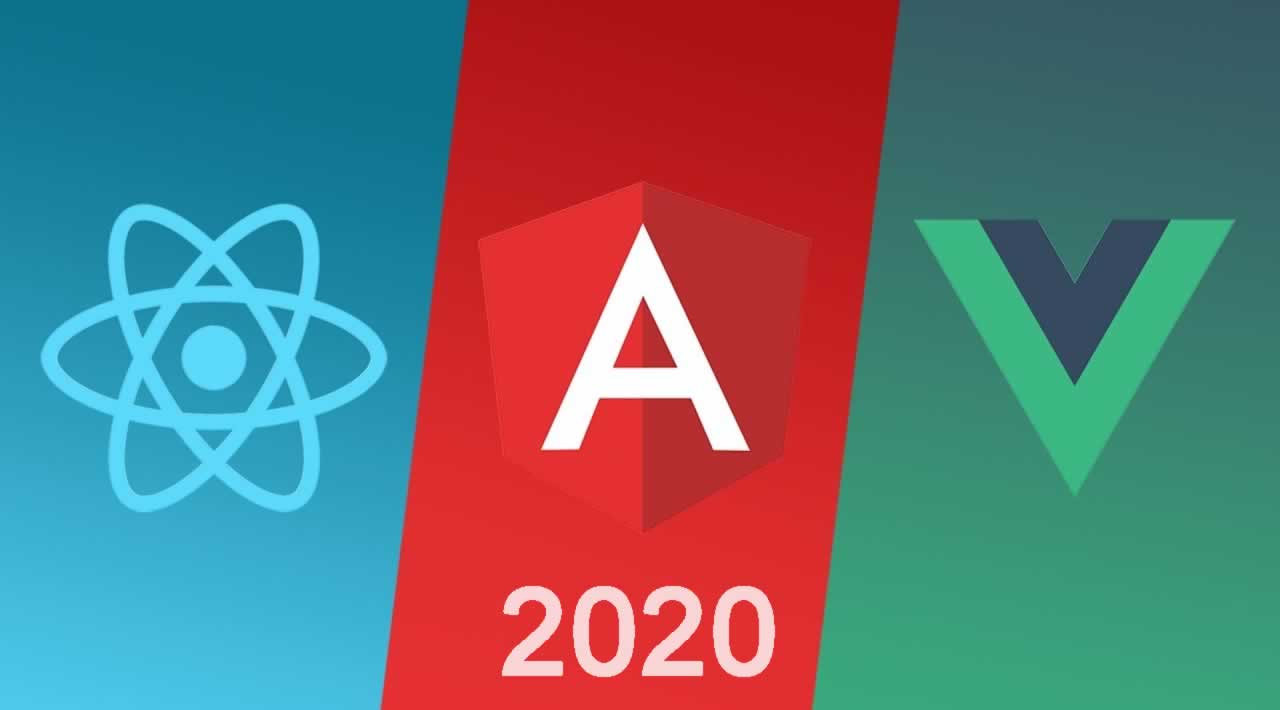 Angular vs React vs Vue: Which is the Best Choice for 2020, which is better performance?

Vue and React offers better performance and flexibility than Angular. Vue and react are more suited for light-weight applications and angular is the best for large UI applications. from routing, templates to testing utilities in its package. Vue is the most popular, loved and growing framework of Javascript.

A year ago, the developers argued: what is better Angular or React? But in 2018 another “player” gained popularity - Vue. That’s why by 2020 you need to decide between these three frameworks. It complicates the choice.

Against this background, I would like to present the usage statistics of each product, the attitude of developers to it, as well as the main advantages and disadvantages. I can't give an exact answer to the question "what is better to choose?". My goal is to give maximum information, on the basis of which you can make your own choices.

It is not likely that you want to study such products for the sake of interest. Most likely, you are planning to use future knowledge to work for some company. Therefore, you need to understand which experts are most in demand at different resources. 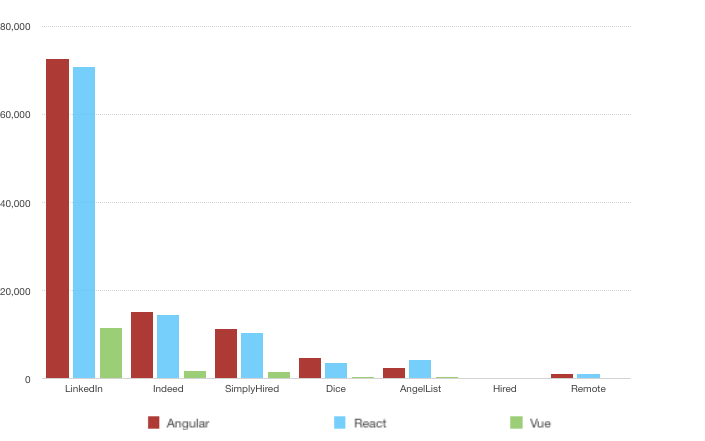 As you can see, experts with knowledge of Angular are the most in demand, although there are not less requests for React developers. Such indicators are not surprising, even considering the rumors that Angular is losing ground. Today, it just has good competition, compared with 2012-2014, when there was no React.What about Vue, the figures are also quite logical. This framework has grown sharply only in 2018, but it is still a long way from the top of the rankings. Therefore, the demand for relevant developers is much less.

The speed of work is important for each developer. It is not about that delays can be annoying. For each project, there is a deadline. The priority is to finish the work earlier, to make edits if it is necessary.

As you can see, Angular is far superior to its competitors. In many ways, it is provided by the latest updates. Many developers claim that Angular v.2 + is a new chapter in the history of frameworks.

But more interesting is that the dark horse Vue bypassed React in figures. Accordingly, not for nothing this framework gained momentum in 2018 and took high ranking positions.

Now let’s consider the frequency of usage and search for these frameworks. This directly shows their demand among users. Accordingly, it will be possible to draw preliminary conclusions about which product developers prefer the most.

As expected, React far surpasses Angular and Vue. It is worth noting that it is downloaded more and more, with the exception of a small leap at the beginning of 2019. Vue is also gaining momentum step by step, but Angular in actual fact doesn't move from the spot by the number of downloads.It is probably due to a lot of controversy and rumors that this development environment has become much worse and its usage today is not rational. Quite a well-known community among developers, The State of Javascript, published the results of interrogations, according to which the talk about worsening of Angular, in comparison with its competitors really began. But now, the exact answer can't be given, because there are still many supporters of this product.

Since Github is the largest platform for hosting IT projects, you cannot get past it when comparing the popularity of frameworks.

First of all, we see that Angular has almost three times less stars and repository copies, which shows its low popularity regarding two competitors. In this case, users have noted more problems or suggested improvements.

Two factors show that Angular is really rated much worse than in previous years. But the framework is improved. However, its figures strongly losing the ground in comparison with competitors. 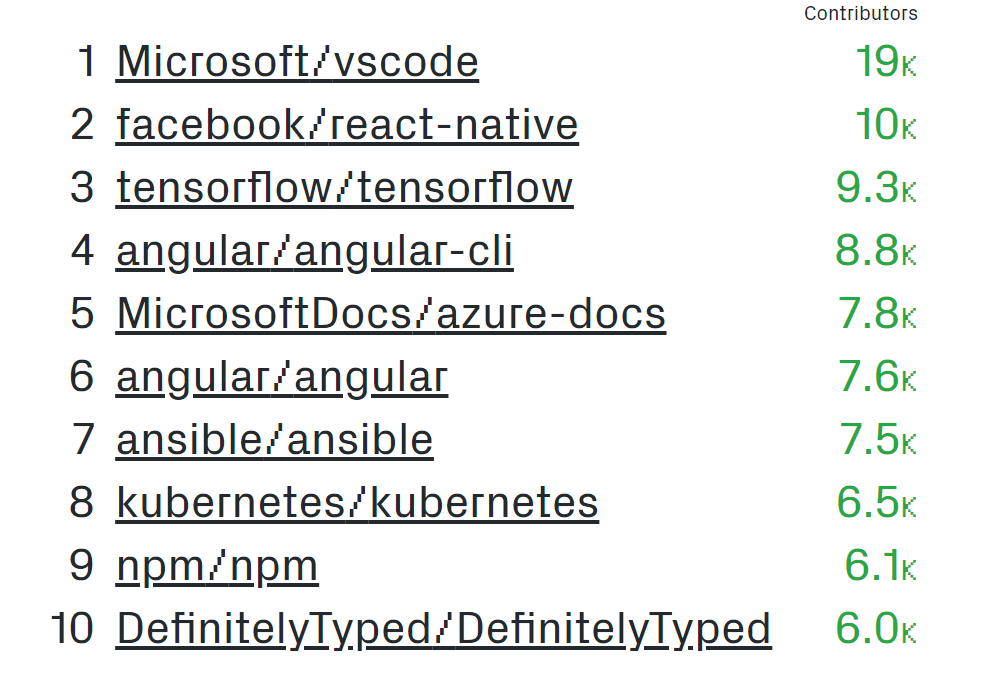 In spite of it, Vue did not even hit in the list of the best open source frameworks for today. At the same time, React takes the second place, and Angular - the sixth, with a rather small gap. (All statistics as of March 8, 2019).

Google queries can’t be taken as the main indicator. Firstly, even frameworks are not always searched exclusively by web designers. Secondly, they are often searched for with a single-word query (for example, “React” instead of “React developer”), and two of the three names may make sense that is not related to IT.

And now the statistics with a modified search query:

Apparently, in the first case React takes the first place, Angular the second, and Vue, quite expectedly - the third. But when searching for only one word, the statistics change dramatically.

In general, the growth of each product is noticeable, if we talk about the number of downloads and activity on Github. Even with increased dissatisfaction, Angular is still holding its ground.

However, you can notice a disproportionate difference between the actual usage of Vue and the stars on Github. After all, in fact, this framework has not yet reached the level of Angular and React.

The January negative leap indicates that these two development environments still have problems and, probably, their growth slows down a bit. This is especially noticeable in the Chinese region, where many developers are rapidly switching to Vue. Therefore, it is possible that in 2020 the graphics will change dramatically.

Important point: Vue is already used by such economic giants as Alibaba, Xiaomi, Tencent and Baidu. All of them are representatives of the Chinese market, which is actively developing and almost crowding out the western one. Therefore, I assume, in 2020 Vue will not only raise its position, but also the demand for experts of this framework will be much higher.

The transition to the new version is always accompanied by new errors and bugs. So, for example, Instagram users in most cases complain about problems in the work of individual tools almost after each update. Dota 2 players have a whole series of jokes about the game bugs and the broken mechanics of the characters during the regular update.

But, as a rule, it doesn't apply to quality frameworks. React is used by companies like Twitter and Airbnb, Vue provides half of the Chinese giants. That’s why stability is very important for developers of each product. After all, they are focused on large companies and in case of an error there will be no time for jokes.

Angular makes large-scale updates but plans them on average 6 months. Moreover, the main API of the previous version becomes obsolete within 6 months after the update. Therefore, users have enough time to make all the necessary changes.

Facebook said that stability is of paramount importance for them. Therefore, in React, the transition to the new version is quite simple. Part of the upgrade is a script that helps the user move to the next version of the software.

As for Vue, 90% of the APIs of adjacent versions are almost identical. Therefore, there are almost no problems with updates. Moreover, in this framework, there is a tool that controls the state of applications after the transition to the new version.

Programming is an art, because when using different tools, you need to love them, not just use them. After all, it is much easier to work with what brings pleasure. Therefore, I offer you The State of Javascript statistics about the developers' attitude to each of the frameworks.

In many ways, these results reflect previous graphs. Again, React has a great advantage, as more than half of the respondents answered they would use this product again. At the same time, only 23.9% of respondents wish to continue working with Angular, and 33.8% will no longer use it.

As for Vue, almost everyone who has already worked with the framework is not opposed to continue using it. And almost 50% are interested in exploring this development environment. Another confirmation that Angular has lost its ground in relation to the development of other products.

In this case, I didn't consider all the features of the products and paid attention only to the key ones, which the developer will mention primarily.

Components are integral ingredients of frameworks. As a rule, they receive input data and change the application behavior, based on them. Visually, it is manifested itself as a change in the user interface.

Returning to The State of Javascript, I also want to draw your attention to the advantages and disadvantages of each product, which the developers have noted. 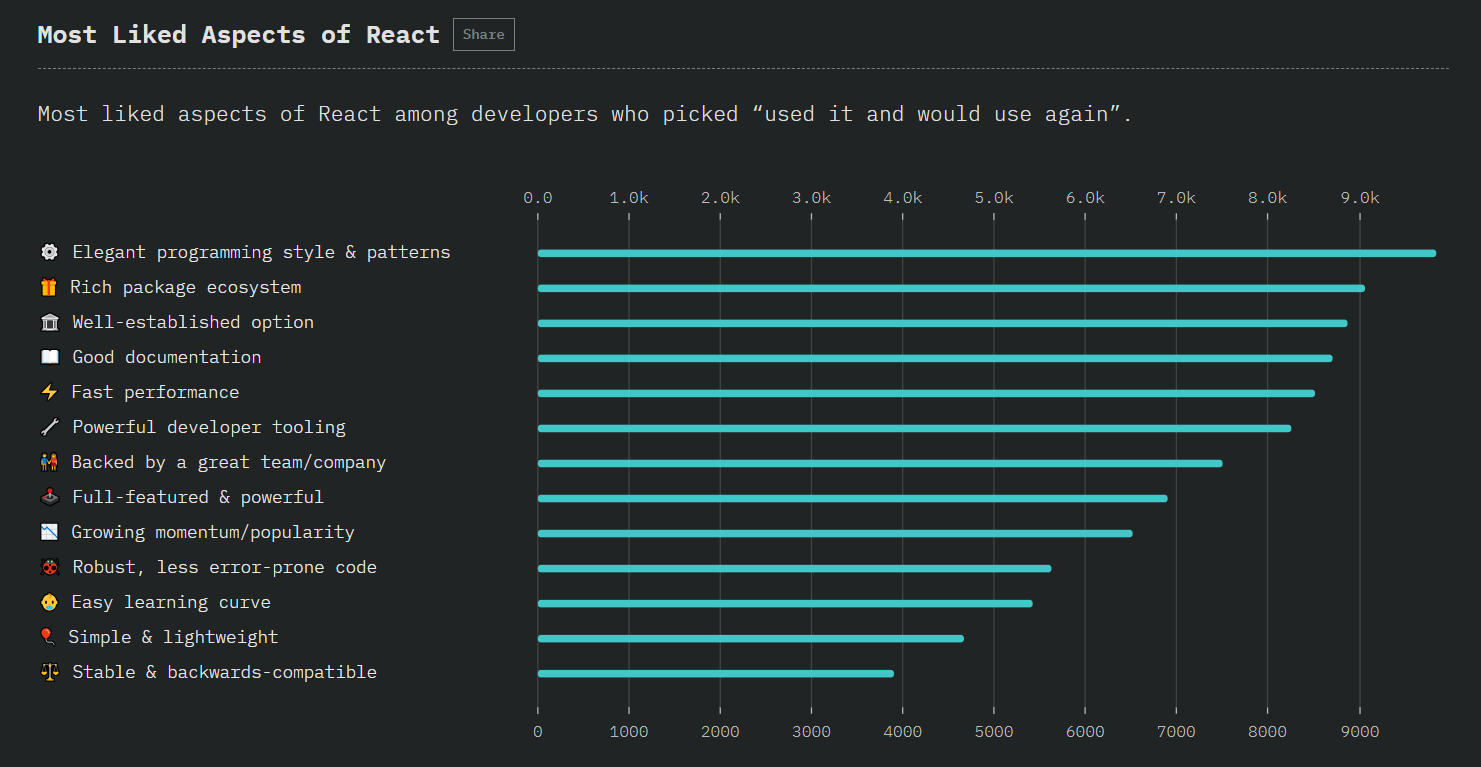 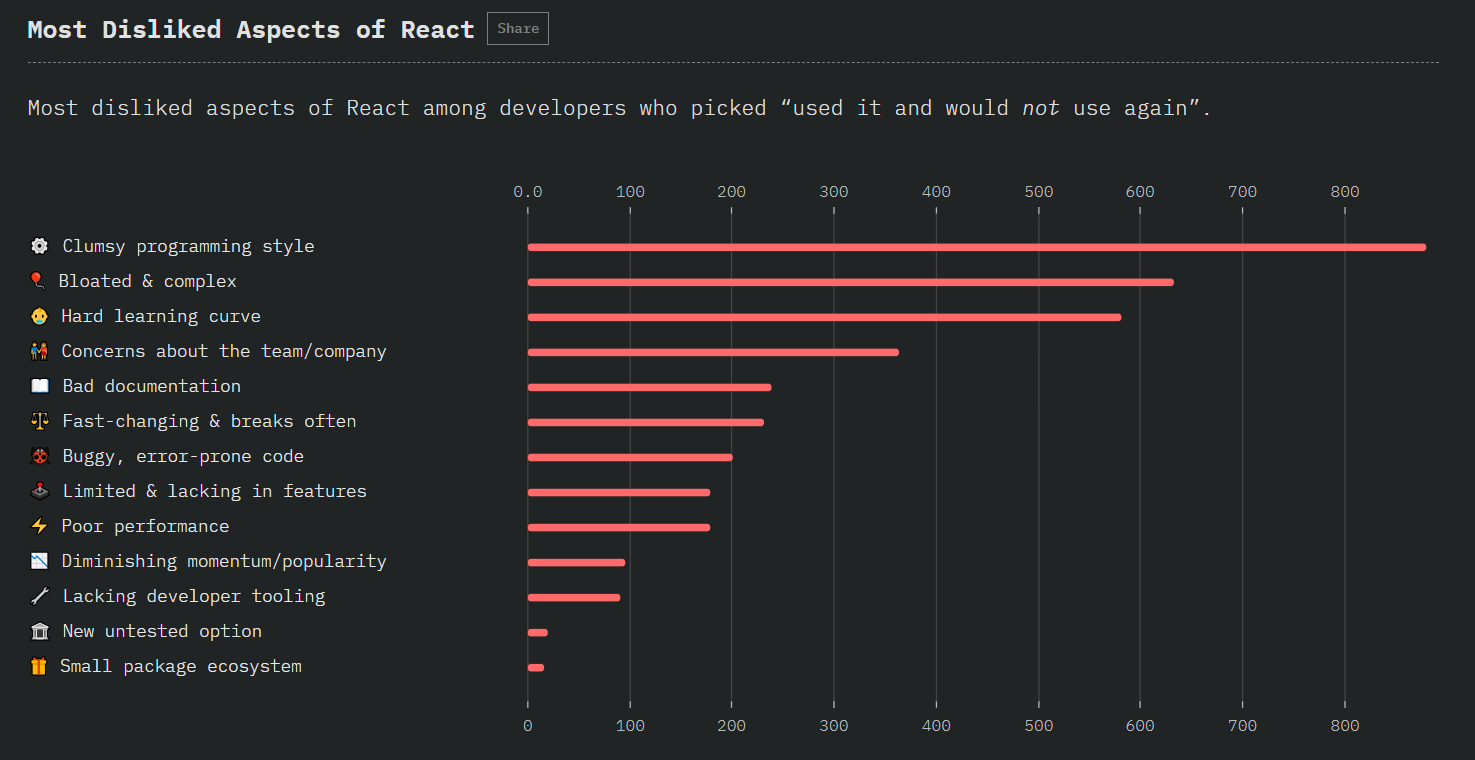 Angular is a good choice for large corporations, as it has full set of tools and quality support. However, its learning curve is steep, so for beginners, this framework will be very difficult.React is a rather “grown-up” product, which is currently the most popular and appreciated by developers. Flexibility and easy integration with other libraries are one of the key features of the product. At the moment, it’s the most versatile option among the three compared.

Vue exists for several years, but in fact it’s a newcomer to the market. Nevertheless, the majority of large Asian companies switched to its usage, that shows its quality. Especially well-suited for those who need fast growth. For example, a start-up with a young team should have paid attention to this particular development environmen.

To date, the top lines are confidently occupied by React. There is a great demand for developers in this environment, so it makes sense to study it. However, for the overall development, Vue is worth considering. This newcomer may soon climb to the top due to its simplicity and ease of usage.

That’s why by 2020 you need to decide between these three frameworks.