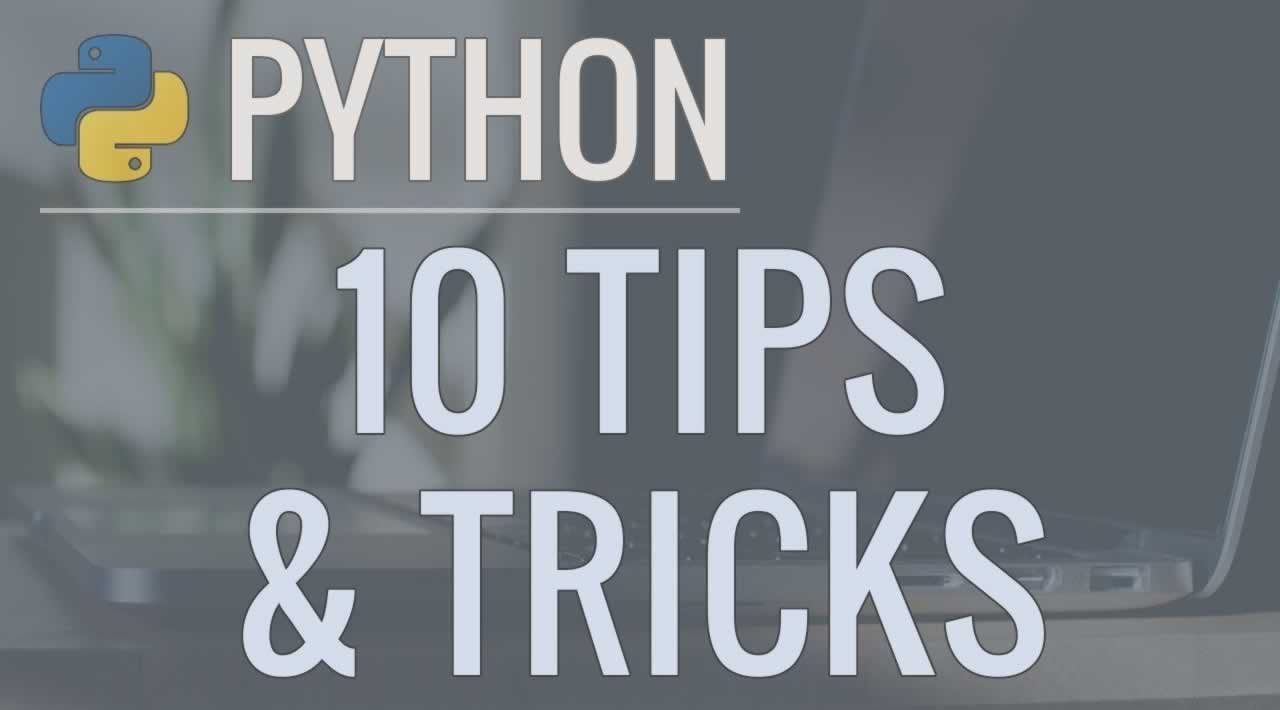 There are plenty of articles written about features in Python such as variable unpacking, partial functions, enumerating iterables, but there is much more to talk about when it comes to Python, so here I will try to show some of the features I know & use, that I haven't yet seen mentioned elsewhere

So here we go.

Problem of sanitizing user input applies to almost every program you might write. Often it's enough to convert characters to lower or upper-case, sometimes you can use Regex to do the work, but for complex cases, there might be a better way:

In this example you can see that whitespace characters "\n" and "\t" have been replaced by single space and "\r" has been removed completely. This is a simple example, but we could take it much further and generate big remapping tables using unicodedata package and its combining() function to generate and map which we could use to remove all accents from string.

2. Taking Slice of an Iterator

If you try to take slice of an Iterator, you will get a TypeError, stating that generator object is not subscriptable, but there is a easy solution to that:

Using itertools.islice we can create a islice object which is an iterator that produces desired items. It's important to note though, that this consumes all generator items up until the start of slice and also all the items in our islice object.

Sometimes you have to work with files which you know that start with variable number of unwanted lines such as comments. itertools again provides easy solution to that:

This code snippet produces only lines after initial comment section. This approach can be useful in case we only want to discard items (lines in this instance) at the beginning of the iterable and don't know how many of them there are.

4. Functions with only Keyword Arguments (kwargs)

It can be helpful to create function that only takes keyword arguments to provide (force) more clarity when using such function:

As you can see this can be easily solved by placing single * argument before keyword arguments. There can obviously be positional arguments if we place them before the * argument.

5. Creating Object That Supports with Statements

We all know how to, for example open file or maybe acquire locks using with statement, but can we actually implement our own? Yes, we can implement context-manager protocol using __enter__ and __exit__ methods:

This is the most common way to implement context management in Python, but there is easier way to do it:

If you ever wrote a program that was creating really big number of instances of some class, you might have noticed that your program suddenly needed a lot of memory. That is because Python uses dictionaries to represent attributes of instances of classes, which makes it fast but not very memory efficient, which is usually not a problem. However, if it becomes a problem for your program you might try using __slots__:

What happens here is that when we define __slots__ attribute, Python uses small fixed-size array for the attributes instead of dictionary, which greatly reduces memory needed for each instance. There are also some downsides to using __slots__ - we can't declare any new attributes and we are restricted to using ones on __slots__. Also classes with __slots__ can't use multiple inheritance.

If instead of optimizing your program memory or CPU usage, you want to just straight up limit it to some hard number, then Python has a library for that too:

Here we can see both options to set maximum CPU runtime as well as maximum memory used limit. For CPU limit we first get soft and hard limit for that specific resource (RLIMIT_CPU) and then set it using number of seconds specified by argument and previously retrieved hard limit. Finally, we register signal that causes system exit if CPU time is exceeded. As for the memory, we again retrieve soft and hard limit and set it using setrlimit with size argument and retrieved hard limit.

8. Controlling What Can Be Imported and What Not

Some languages have very obvious mechanism for exporting members (variables, methods, interfaces) such as Golang, where only members starting with upper-case letter are exported. In Python on the other hand, everything is exported, unless we use __all__:

Based on code snippet above, we know that only bar function will be exported. Also, we can leave __all__ empty and nothing will be exported casing AttributeError when importing from this module.

It can be pretty annoying to implement all the comparison operators for one class, considering there are quite a few of them - __lt__ , __le__ , __gt__ , or __ge__. But what if there was an easier way to do it? functools.total_ordering to the rescue:

How does this actually work? total_ordering decorator is used to simplify the process of implementing ordering of instances for our class. It's only needed to define __lt__ and __eq__, which is the minimum needed for mapping of remaining operations and that's the job of decorator - it fills the gaps for us.

Using lots of hardcoded index values can quickly become a maintenance and readability mess. One option would be to use constants for all index values, but we can do better:

In this example, we can see that we can avoid mysterious indices, by first naming them using slice function and then using them when slicing out part of string. You can also get more information about the slice object using its attributes .start, .stop and .step.

Lots of command line tools or scripts require username and password to operate. So, if you happen to write such program you might find getpass module useful:

This very simple package allows you to prompt the user for a password as well as get their username, by extracting current user’s login name. Be aware though, that not every system supports hiding of passwords. Python will try to warn you about that, so just read warnings in command line.

Now, for a little more obscure feature of Python standard library. If you ever find yourself in situation where you need to find words similar to some input string using something like Levenshtein distance Python and difflib have your back.

difflib.get_close_matches finds the best "good enough" matches. Here, first argument is being matched against the second one. We can also supply optional argument n which specifies maximum number of matches to be returned. Another available keyword argument cutoff (defaults to 0.6) can be set to change threshold for score of matched strings.

If you have to do some networking in Python you might find ipaddress module very useful. One use-case would be generating list of ip addresses from CIDR ( Classless Inter-Domain Routing):

Another nice feature are network membership checks of IP addresses:

There are plenty more interesting features that I will not go over as you can find those here. Be aware though, that there is only a limited interoperability between ipaddress module and other network-related modules. For example, you can't use instances of IPv4Network as address strings - they need to be converted using str first.

If you are one of the people who refuse to use IDE and are coding in Vim or Emacs, then you probably got into a situation where having debugger like in IDE would be useful. And you know what? you have one — just run your program with python3.8 -i - the -i launches interactive shell as soon as your program terminates and from there you can explore all variables and call functions. Neat, but how about actual debugger ( pdb)?

And run script with python3.8 -i script.py

We see where we crashed, now let’s set a breakpoint:

Most of the time print statements and tracebacks are enough for debugging, but sometimes, you need to start poking around to get a sense of what’s happening inside your program. In these cases you can set breakpoint(s) and when you run the program, the execution will stop on the line of breakpoint and you can examine your program, e.g. list function args, evaluate expression, list variables or just step through as shown above. pdb is fully featured python shell so you can execute literary anything, but you will need some of the debugger commands which you can find here

One feature that is very common in programming languages, but not in Python, is function overloading. Even though you can’t overload normal functions, you can still (kinda) overload constructors using class methods:

You might be inclined to put all the logic of alternate constructors into __init__ and solve it using *args, **kwargs and bunch of if statements instead of using class methods. That could work, but it can become hard to read and hard to maintain. I would therefore recommend to put very little logic into __init__ and perform all the operations in separate methods/constructors. This way you will get code that is clean and clear both for the maintainer and user of the class.

Have you ever wrote a function that was performing expensive I/O operations or some fairly slow recursive function that could benefit from caching (memoizing) of its results? If you did, then there is easy solution to that using lru_cache from functools:

In this example we are doing GET requests that are being cached (up to 32 cached results). You can also see that we can inspect cache info of our function using cache_info method. The decorator also provides a clear_cache method for invalidating cached results. I want to also point out, that this should not be used with functions that have side-effects or ones that create mutable objects with each call.

Finding the most common items in list is pretty common task, which you could do using for cycle and dictionary (map), but that would be a waste of time as there is Counter class in collections module:

Under the hood, Counter is just a dictionary that maps items to number of occurrences, therefore you can use it as normal dict:

I think that this time most of the tips I shared here can be useful pretty much everyday if you are working with Python, so I hope they will come in handy. Also, if you have any thoughts on these Python tips and tricks, or maybe if you know of any better ways of solving above problems, then let me know! 🙂