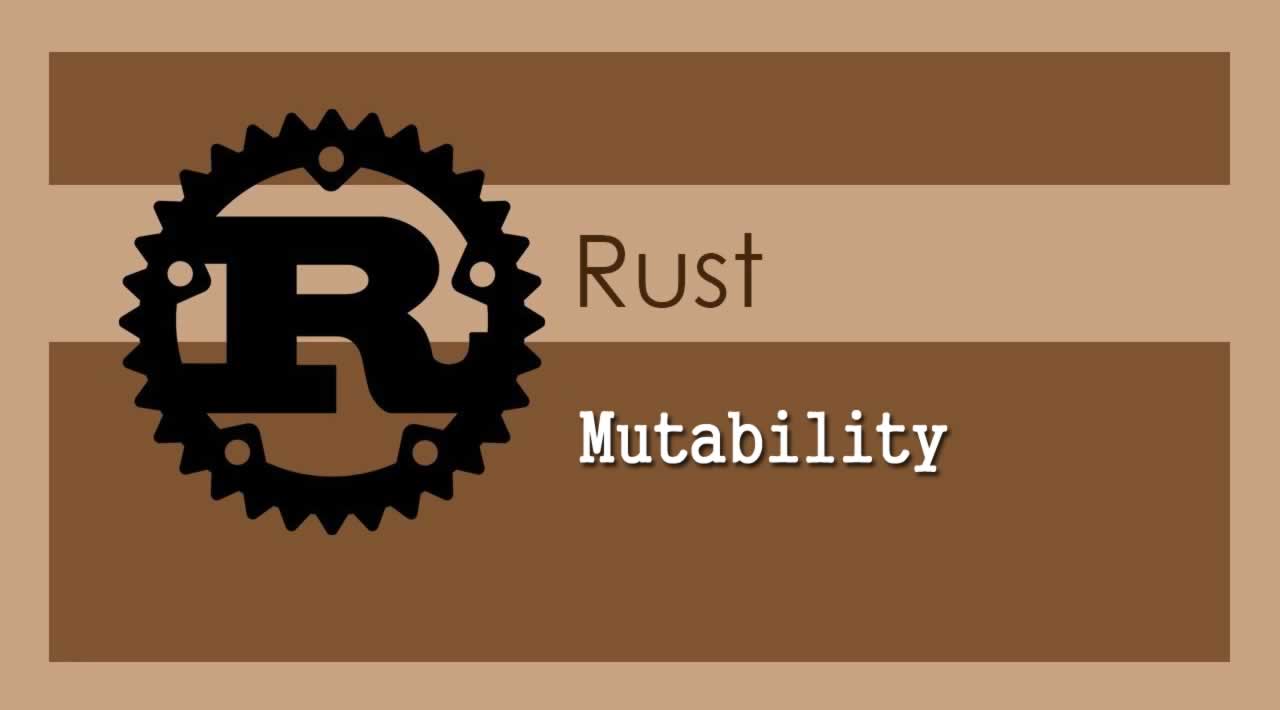 Mutability, the ability to change something, works a bit differently in Rust than in other languages. Mutability is a property of either a borrow (&mut) or a binding (let mut). Interior vs. Exterior Mutability: when we say something is ‘immutable’ in Rust, that doesn’t mean that it’s not able to be changed: we are referring to its ‘exterior mutability’ that in this case is immutable.

Mutability, the ability to change something, works a bit differently in Rust than in other languages. The first aspect of mutability is its non-default status:

We can introduce mutability with the mut keyword:

This is a mutable variable binding. When a binding is mutable, it means you’re allowed to change what the binding points to. So in the above example, it’s not so much that the value at x is changing, but that the binding changed from one i32 to another.

Of course, if you need both:

Now y can be bound to another value, and the value it’s referencing can be changed.

It’s important to note that mut is part of a pattern, so you can do things like this:

Note that here, the x is mutable, but not the y.

However, when we say something is ‘immutable’ in Rust, that doesn’t mean that it’s not able to be changed: we are referring to its ‘exterior mutability’ that in this case is immutable. Consider, for example, Arc<T>:

When we call clone(), the Arc<T> needs to update the reference count. Yet we’ve not used any muts here, x is an immutable binding, and we didn’t take &mut 5 or anything. So what gives?

To understand this, we have to go back to the core of Rust’s guiding philosophy, memory safety, and the mechanism by which Rust guarantees it, the ownership system, and more specifically, borrowing:

You may have one or the other of these two kinds of borrows, but not both at the same time:

So, that’s the real definition of ‘immutability’: is this safe to have two pointers to? In Arc<T>’s case, yes: the mutation is entirely contained inside the structure itself. It’s not user facing. For this reason, it hands out &T with clone(). If it handed out &mut Ts, though, that would be a problem.

Other types, like the ones in the std::cell module, have the opposite: interior mutability. For example:

RefCell hands out &mut references to what’s inside of it with the borrow_mut() method. Isn’t that dangerous? What if we do:

This will in fact panic, at runtime. This is what RefCell does: it enforces Rust’s borrowing rules at runtime, and panic!s if they’re violated. This allows us to get around another aspect of Rust’s mutability rules. Let’s talk about it first.

Mutability is a property of either a borrow (&mut) or a binding (let mut). This means that, for example, you cannot have a struct with some fields mutable and some immutable:

The mutability of a struct is in its binding:

However, by using Cell<T>, you can emulate field-level mutability:

The Rust Programming Language - Understanding If in Rust

The Rust Programming Language - Understanding If in Rust. Rust’s take on if is not particularly complex, but it’s much more like the if you’ll find in a dynamically typed language than in a more traditional systems language. if is a specific form of a more general concept, the ‘branch’, whose name comes from a branch in a tree: a decision point, where depending on a choice, multiple paths can be taken.

The Rust Programming Language - Understanding Ownership in Rust. Ownership is Rust's most unique feature, and it enables Rust to make memory safety guarantees without needing a garbage collector. Ownership is how Rust achieves its largest goal, memory safety. There are a few distinct concepts, each with its own chapter: ownership, borrowing and lifetimes ...

The Rust Programming Language - Understanding Functions in Rust - Functions - Functions are the building blocks of readable, maintainable, and reusable code. Every Rust program has at least one function.