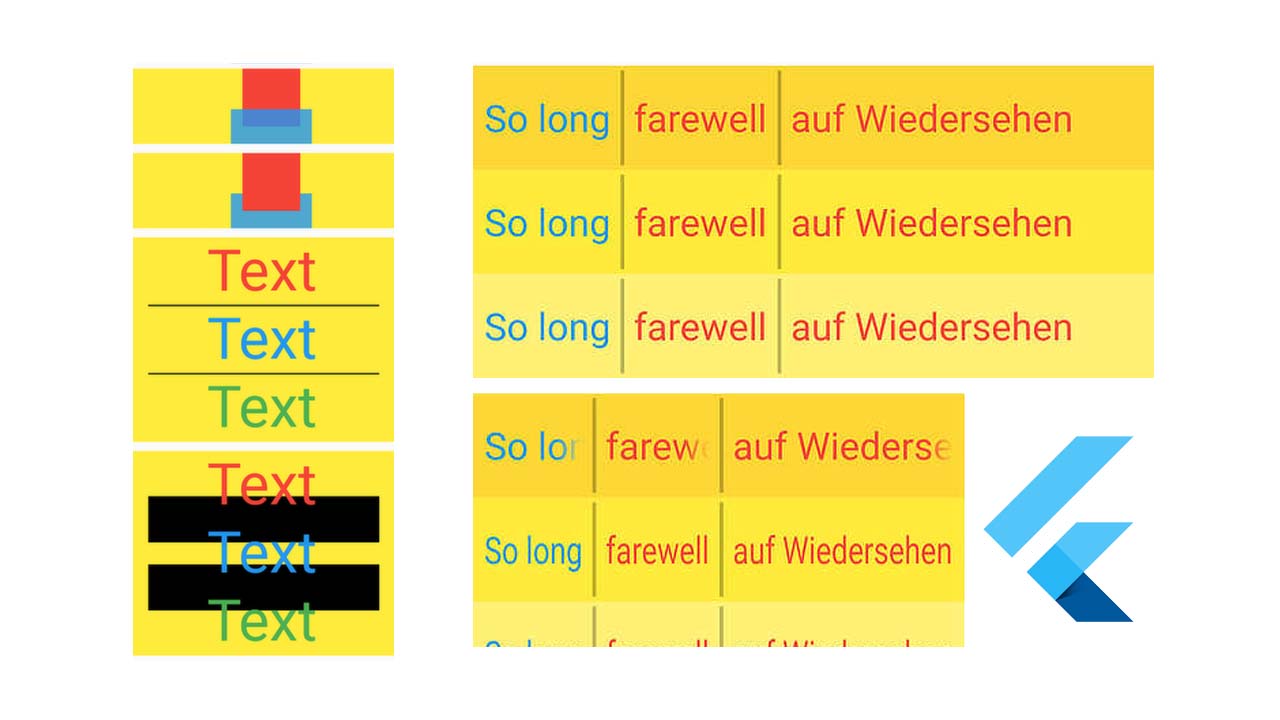 Flutter package: Assorted layout widgets that boldly go where no native Flutter widgets have gone before.

Widgets in this package:

I will slowly but surely add interesting widgets to this package.

Given a list of children widgets, this will arrange them in a column. It can overlap cells, add separators and more.

Note: This is not a substitute for Flutter's native Column, it doesn't try to have a similar API, and it doesn't do all that Column does. In special, Expanded and Flexible widgets don't work inside of ColumnSuper, and it will overflow if the column is not big enough to fit its contents. ColumnSuper is meant only for certain use cases where Column won't work, like when you need overlapping cells.

Given a list of children widgets, this will arrange them in a row. It can overlap cells, add separators and more.

On contrary to ColumnSuper and the native Row (which will overflow if the cells are not big enough to fit their content), RowSuper will resize its cells, proportionately to the width of the minimum intrinsic width of each cell content.

Most parameters are the same as the ones of ColumnSuper, except:

You can also use a RowSpacer to add empty space (if available) between cells. For example:

Note: This is not a substitute for Flutter's native Row, it doesn't try to have a similar API, and it doesn't do all that Row does. In special, Expanded and Flexible widgets don't work inside of RowSuper, since RowSuper will resize cells proportionately when content doesn't fit. RowSuper is meant only for certain use cases where Row won't work, like when you need overlapping cells, or when you need to scale the contents of the cells when they don't fit.

The child will be asked to define its own intrinsic height. If fitsHeight is true, the child will be proportionately resized (keeping its aspect ratio) to fit the available height.

Then, if the child doesn't fit the width, it will be shrinked horizontally only (not keeping its aspect ratio) until it fits, unless shrinkLimit is larger than zero, in which case it will shrink only until that limit. Note if shrinkLimit is 1.0 the child will not shrink at all. The default is 0.67 (67%).

This is specially useful for text that is displayed in a single line. When text doesn't fit the container it will shrink only horizontally, until it reaches the shrink limit. From that point on it will clip, display ellipsis or fade, according to the text's Text.overflow property.

Box is something between a Container and a SizedBox, which is less verbose and can be made const.

Since it can be made const, it's good for creating colored boxes, with or without a child and padding:

If top and bottom are equal, you can instead provide vertical:

You can't provide vertical and top or bottom at the same time.

You can also hide the box by making the show parameter equal to false.

Box can be used as a cleaner substitute for Padding. For example, this code:

Is the functional equivalent of this:

WrapSuper is similar to the native Wrap widget with direction = Axis.horizontal, but it allows you to choose different algorithms for the line-breaks.

WrapSuper with WrapType.fit uses a greedy algorithm for line breaks, which is the same one used by the native Wrap widget.

However, WrapSuper with WrapType.balanced (the default) uses a minimum raggedness algorithm for line breaks. It will position its child widgets in the same number of lines as the greedy algorithm, but these lines will tend to be more similar in width.

TextOneLine is a substitute for Text when maxLines: 1, to fix this issue: https://github.com/flutter/flutter/issues/18761 filled by myself a long time ago.

It uses a special fade-with-ellipsis, which is much better than the current buggy and ugly-looking ellipsis-that-cuts-the-whole-word.

Will print this in the screen:

This widget probably only makes sense while that issue is not fixed.

What will be the impact on your pocket if you opt for Flutter app development?

We cannot imagine the modern world without mobile apps as apps have become an integral part of our lifestyle. We have mobile apps for all our daily needs right from food to travel to medicines to movie or hotel bookings and many more. Mobile app development is indeed playing a prominent part in making the world fast-paced. Almost everything can be managed through mobile apps as they are rich in features and impeccable in making the life of user easy. The high performance of mobile apps has made it inevitable for businesses to opt for them or lag behind in …

Free Flutter Introduction for Beginners: Get Started with Flutter and learn how to build an iOS and Android app with Flutter! Flutter Crash Course for Beginners 2020 - Build a Flutter App with Google's Flutter & Dart