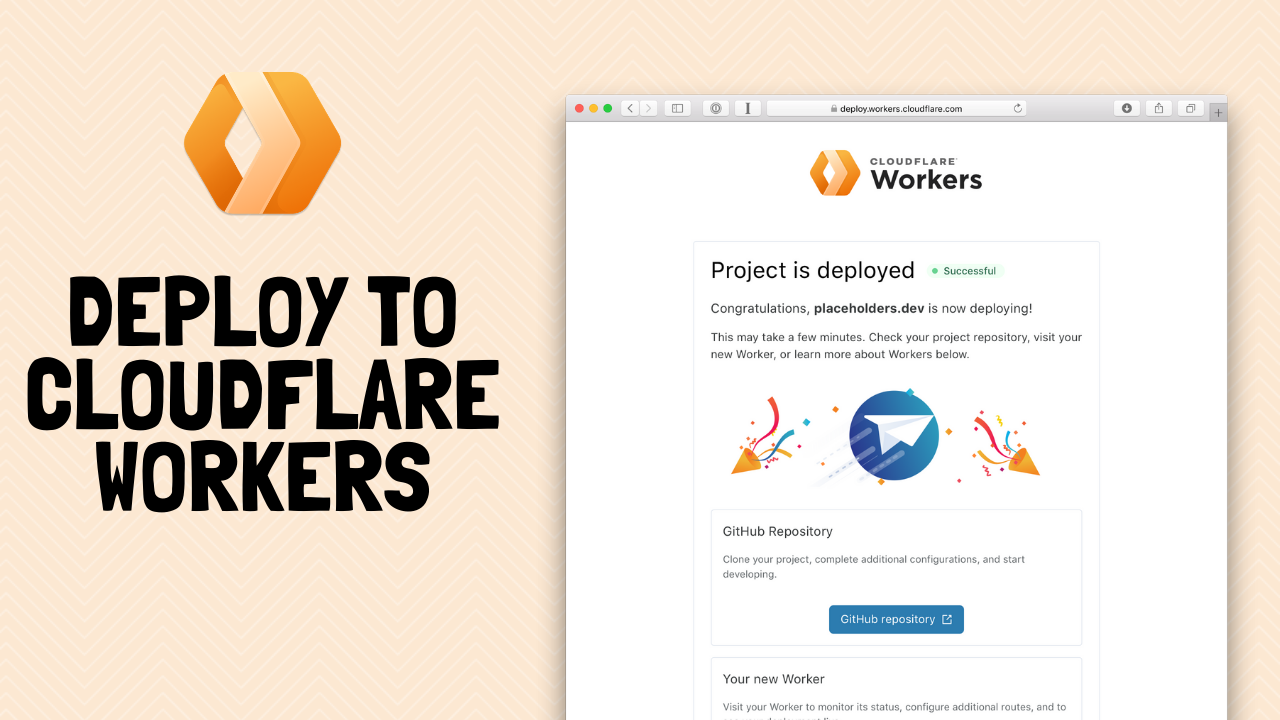 Introducing Deploy Buttons: Deploy Buttons help you deploy a project to the Workers Platform without even needing to set up a local development environment.

When I first try out new development platforms, the first thing I do is get an OSS (Open Source Software) project I find on Github up and running. I used to start by following tutorials or digging through documentation. It’s a little bit counterintuitive. Let me share with you why. One reason is that Hello, World! examples rarely show the real “magic” of the platform. I want to feel excited and get a sense of how other people are creatively using the platform.

For example, I love it when I can build and deploy an OSS Pokedex app in a few minutes on Flutter to see if the platform actually lives up to the hype. It’s so much easier to do this than to spend a few hours following tutorials and documentation to get through the initial learning curve. You can think of it as shortening the time to first dopamine.

Another reason is that it makes learning the new platform much faster. Building off of an experienced developer’s work shows me which classes and functions are most useful to learn. There’s more nuance to building out full applications than is usually explained in the documentation. I can see how the pieces fit together and get a deeper understanding.

When I started my internship on the Workers team, I realized I could help create the magical experience of trying out a new platform quickly for the Workers dev experience. The team and I have spent the last few months working hard with the Workers team to make this possible. Today, I’m happy to share with you: Deploy Buttons.

Deploy Buttons let you deploy a project to the Workers Platform without even needing to set up a local development environment. Before Deploy Buttons, new developers had to jump between multiple places like the signup pages, the docs, the dashboard, and Wrangler to deploy a project. Now, it’s as easy as clicking a Deploy Button and three short steps to deploy using our new web-based deploy tool. This is the fastest way for beginners to get something live in less than five minutes, and for developers to share their projects with others by creating their own deploy buttons.

A “cold start” is the time it takes to load and execute a new copy of a serverless function for the first time. It’s a problem that’s both complicated to solve and costly to fix.

Today the Cloudflare Workers team is thrilled to announce the launch of Cron Triggers. Before now, Workers were triggered purely by incoming HTTP requests but starting today you’ll be able to set a scheduler to run your Worker on a timed interval.

Today, we are excited to announce the next phase of this with the launch of our new platform, Workers Unbound, without restrictive CPU limits in a private beta. We launched Cloudflare Workers® in 2017 with the goal of building the development platform that we wished we had. We want to enable developers to build great software while Cloudflare manages the overhead of configuring and maintaining the infrastructure. Workers is with you from the first line of code, to the first application, all the way to a globally scaled product.