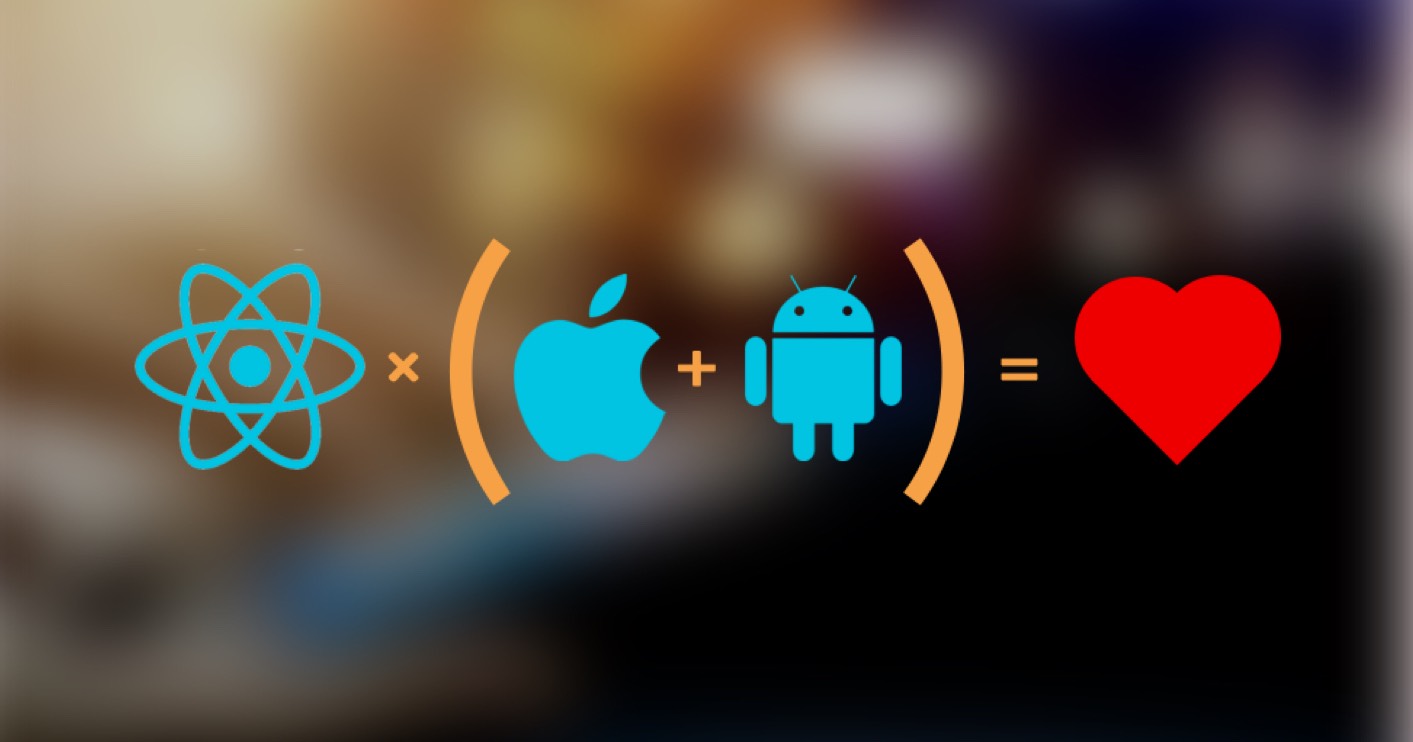 React Native allows writing hybrid apps that work on iOS, Universal Windows Platform, and Android without the difference in performance to their native ‘relatives.’

A cross-platform infrastructure is a wonderful alternative to standard mobile applications. One of the most popular JavaScript frameworks is React Native. Facebook managed to launch an open-source platform which allowed numerous companies to make their projects efficiently with React.

React Native allows writing hybrid apps that work on iOS, Universal Windows Platform, and Android without the difference in performance to their native ‘relatives.’ The key difference here, though, lies in functionality:

native solutions are created separately for each compatible platform, with the consideration of particular differences and requirements; hybrid apps are created once to fit all.

In fact, React Native makes the line between common software development requirements more transparent. This framework is prophesied by many to be the real future of the mobile app market.

THE POPULARITY The tendencies of using React Native for the development of mobile solutions is increasingly growing and spreading. There are at least six reasons for such popularity:

CROSS-PLATFORM A major part of code is written in JavaScript - one of the most renowned programming languages for any platform in general. Its open interaction with native components of other systems allows for apps to work with all existing OS's. Particular elements, like design, still require an individual approach, however.

ACCESSIBILITY Apps built with React Native by a specialist that has experience working with frontend and backend parts don’t require any special, time-consuming preparation. One utterly crucial requirement here is the high skill of writing in JavaScript as well as React knowledge. Experience is also required to not get confused by the similar aspects of iOS and Android.

TIME-EFFICIENCY Apart from the multipurpose character and accessibility, the time-efficiency is achieved with the help of the extensive community as well. There are numerous connectible modules in public access that can be used in React Native to solve various issues.

Sometimes, a project can be completed with the help of some other framework that is cheaper and faster, but you won’t be able to provide the native performance without React.

SPEED WITHOUT COMPLICATIONS Apps built with React Native is the perfect solution for small and medium-scale solutions that don’t require the processing of large data volumes, video content, or complex calculations. End products are identical to native solutions in terms of performance, which allows the framework to meet user expectations and hold a valued position in the mobile development niche.

UPGRADES Automatic updates in apps is a definite advantage of React Native. Users don’t need to update manually through App or Play Store anymore, which reduces issues with outdated versions. Only the native components should be updated manually.

COMPATIBILITY A simple way to combine the framework with native code elements written in Objective C, Swift, or JavaScript allows for adding such components to both key platforms at once, boosting the resource performance.

FACEBOOK Both the world-renowned social network and related apps like Ads Manager and Facebook Analytics serve as vivid React Native examples. The numerous web development benefits (fast iteration, creation of a single command for all products, etc.) allow to decrease the loading time 2x. The performance speed is among the key properties of a successful solution.

INSTAGRAM This is a technical guru that started integrating a cross-platform tool with a native app from the simplest representation - push notifications, previously implemented as WebView. The interface simplicity took away the need to build the navigational infrastructure.

Thanks to the multipurpose character of code, the team of developers managed to solve many processing issues and complete the project much faster as opposed to its native counterpart.

SKYPE Microsoft updated its Android app, switching it to a platform based on React Native, which shows favor for the functionality and usability the framework offers. This technological monster refused using its own product - Xamarin - ultimately choosing React Native instead.

TESLA This is more complex, as opposed to the previous React Native app examples - a project of a world-renowned car manufacturing giant. The tech solution here allows users to directly interact with their Tesla vehicle. In the ‘live’ mode, you can turn charging on and off, warm up or cool down the car, block or unblock it from a distance, and track its movement and location.

DISCOVERY VR A top-of-the-line virtual reality solution, created with the help of the framework in the discussion. VR allows users to explore new places, characters, and concepts most conveniently. With the exclusive content from Discovery, this is all the more an attention-grabbing solution.

SOUNDCLOUD PULSE SoundCloud is the largest audio streaming platform in the world, containing over 150 million tracks and continuously replenishing music. React Native paved the way for the app’s iOS iteration. The difference in the quality of versions for different OS's used to be huge. The framework allowed SoundCloud developers to efficiently update their solution without involving any narrow-profiled experts.

BLOOMBERG This is a renowned business portal that provides relevant market, financial, cryptocurrency, and other information. An updated resource received the interactive interface with personalized content and live streams. The speed of the portal connection was boosted dramatically.

ADIDAS GLITCH The only way to purchase a longstanding exclusive implementation of the sports giant is to use its React Native-based app. Currently, it is available only in Great Britain, France, and Germany, but the solution is looking to expand upon the positive testing results.

DELIVERY.COM This is a service for ordering product delivery from your favorite wine stores, restaurants, cafes, as well as laundry and dry-cleaning services. The app provides comparison data and saves addresses and other information about order and payments.

React Native made it possible to combine the built-in app map with the compass, scaling, and rotating features, significantly decreasing memory requirements and accelerating the speed of loading.

MORE PARTNERS It’s only a reasonable sign of quality in any project or product when an extensive scope of production giants prefer to use it. The functionality, wide scope of application, and adaptability of React Native can boast more satisfied clients in all possible business niches. Other prominent apps using React Native that should be mentioned include:

Wix - a hosting and website design services company. Uber Eats - a restaurant food delivery app. Vogue - a fashion magazine dedicated app. Myntra - a big Indian clothing store. QQ - the largest Chinese messenger, servicing hundreds of millions of users. Discord - a specialized app for gamers that provides a convenient means of online connection. Pinterest - a storage for ideas and inspiration for all fields of life. Salesforce - combines a CRM, a chatter, and many other user processes and business applications. Unacademy - the largest Indian educational platform. 2048 - a mobile game, which is one of the most popular React Native apps in the App Store, with millions of downloads. KFC - a dedicated loyalty app. CBS Sports Franchise Football - the best football game of 2016. Hive - an innovation that allows users to manage their home from afar. Yeti Smart Home - another smart home concept implemented with React Native. Whym - a real-time translator for travelers, hospitality, and tourism companies.
Townske - another solution for travelers that provides tips on visiting local attractions. Artsy - a collector’s assistant that helps to find and purchase over half a million various art objects. MoneyLion - a financial tool, with the help of which, you can store and withdraw money in any part of the world via only your smartphone. BENEFITS OF REACT NATIVE The popularity of the discussed framework demonstrates how a great number of developers consider it to be the best foundation for their projects. Native tools are still widely used, but the benefits of ‘Facebook’s offspring’ become less possible to ignore every year.

REUSABLE CODE The wholesomeness of the coding base for several platforms and an ability to use it with web apps allow users to dramatically save time and money on project costs. A company simply requires fewer in-house programmers as well as third-party specialists.

IT HAS EVERYTHING If it’s all about web development, React Native will be everything you need. If it’s about designing a standalone app, however, the native tools, such as the following, come in handy:

a library additional parameters for key platforms Flexbox - styling of the user interface widgets, plugins, and animations for visual attractiveness of the product SEAMLESS INTEGRATION OF FEATURES The economy of resources without sacrificing quality and time is the unique feature of React Native. The framework’s accessible capabilities allow for much faster handling of tasks like:

AFTERWORD The ever-growing popularity of the framework is based on the great cost-efficient, universal nature of React Native. If your solution doesn’t allow for processing of large data volumes, complex animations, or video - React Native will be your best choice at the moment.

Considering that many tech giants at the Microsoft level have switched from authentic products to this framework, due to its flexibility and efficiency, React Native is the future of hybrid app-making.

We at Anyforsoft are fans of developing React Native apps. We help our customers to save budget and reduce time-to-market while delivering a fully-functioning application.