Q&A on the Book Techlash 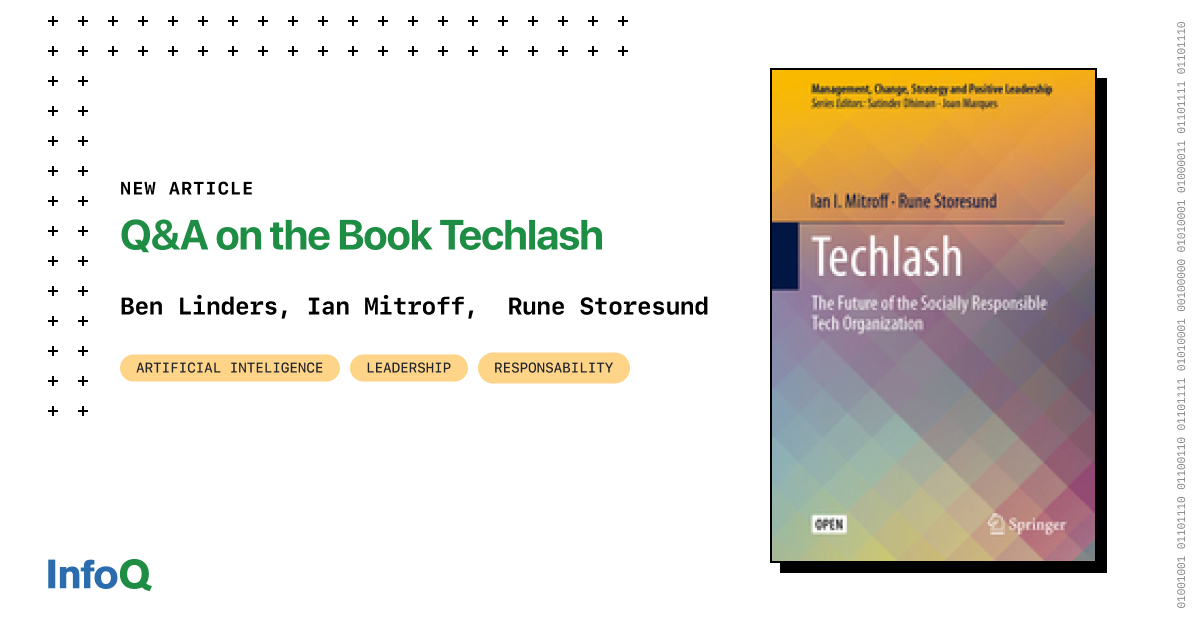 The book Techlash by Ian Mitroff and Rune Storesund explains why companies need to become socially responsible by considering the potential negative outcomes of technology. It explains how proactive crisis management can help prevent a crisis by the early detection and correction of deviations from expected conditions.

The book Techlash by Ian Mitroff and Rune Storesund explains why companies need to become socially responsible by considering the potential negative outcomes of technology. It explains how proactive crisis management can help prevent a crisis by the early detection and correction of deviations from expected conditions.

InfoQ interviewed Ian Mitroff and Rune Storesund about the problems tech is facing and the factors which lead to a backlash against tech companies,  the threats posed by technology and why tech companies should become socially responsible, the theory of the unthinkable, the fatal flaws of AI, tech courts, proactive crisis management,  ethics, and how tech leaders can take social responsibility.

InfoQ: Why did you write this book?

Ian Mitroff: We wrote the book because we are fundamentally concerned about the accumulating negative impacts of technology on our lives and the glaring inability of technologists to foresee and address them.

Rune Storesund: This book was motivated to empower the public to be proactive in their thinking regarding new emerging technologies.

Technology developers are uniquely positioned (because only they have a “vision” of what the outcome of the technology will be) to consider both the positive as well as the potential negative outcomes of their technologies. Currently, the preponderance of the focus is on the “good” outcomes of technology (driven in many cases to secure capital funding), with a total omission of potential “negative” outcomes, deferring this to later stages AFTER the technology has been implemented (“We just need to get it launched and generate revenue”).

InfoQ: For whom is this book intended?

Mitroff: All of us who are impacted by technology, i.e., everyone, effectively.

Storesund:  The book is intended for the general public, but is also targeted towards individuals who develop new technologies and the organizations that provide funding for such ventures.  One of our working hypotheses is that these tech developers may not know that there are proactive steps they can take to help configure the technology to better manage and minimize the portfolio of negative impacts stemming from their work.

InfoQ: What are the major problems that tech is facing?

Mitroff:  In our quest to become the masters of human evolution, and thus to direct it for our benefit, we’re playing with forces of whose consequences we have little knowledge, and even less control over. Thus, in the hope of curing childhood diseases, Chinese doctors have made significant modifications in the DNA of twins, thereby giving rise to the all-too-real fears of “designer babies,” if not ultimately “designer humans.”

Storesund:  First, let’s make sure we acknowledge that technology is a broad spectrum of things.  Also, small-scale “research and development” projects may or may not launch into the larger global community.  There are many motivations that drive development of technologies and intellectual interest, trying to solve a “problem,” fulfilling a social/societal need, etc.  Given this context, the most pressing problem for tech is the contrast between the narrow focus of the tech developer relative to the larger universe of applications and potential modifications.  Tech developers must "open" their thinking to be mindful of these additional contexts in which the fruits of their labor will reside.

It is widely accepted that when English Banker, Sir Henry Furnese increased his profits after gathering information way back in the 1800s, the term Business Intelligence was coined. Imagine you are the captain of a ship that has a broken compass...

Artificial Intelligence and Big Data​: The super team to take your business ahead

Big data and AI help businesses to enhance the customer experience, boost ROI & productivity and making business processes smoother. Artificial Intelligence and Big data are and will be the essential factors that will shape the present and the...

What are the different types of business level strategies?