Now, with significant increase in the consumer and commercial drone markets, there’s an entirely new set of potential implementations for the technology and the people utilizing it.

It used to be that when someone heard the term “drone” the first thing they thought of was militaries flying unmanned aerial vehicles (UAV) over hostile territory to record valuable information or potentially even deploy weapons. With the advent of recreational drones, the focus has shifted, with many associating drones with fun, outdoor activities.

Now, with significant increase in the consumer and commercial drone markets, there’s an entirely new set of potential implementations for the technology and the people utilizing it. 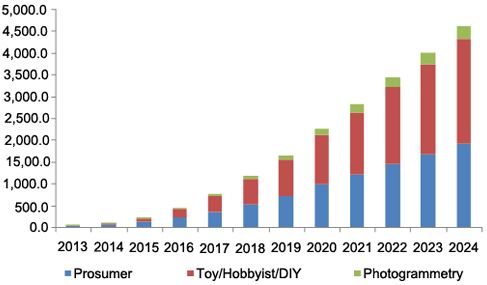 The market for consumer drones has been growing consistently over recent years, especially after the Federal Aviation Administration (FAA) in the US was brought to court in response to an original decision requiring recreational owners to register their drones. Upon review, a federal appeals court deemed the program unlawful and stated that recreational drone users would not need to register their drones. Now, a recent bill from the Trump administration requires owners to register, yet again. However, even with the on-again, off-again relationship with the FAA, drone enthusiasts are still involved in their hobby in large numbers. In 2016 it was reported that drone sales tripled in one year alone, according to research from The NPD Group. Ben Arnold, executive director and industry analyst for The NPD Group said in a statement along with the published research that the growth can be attributed to many new uses for drones.