Improve your Docker workflow with this VS Code extension 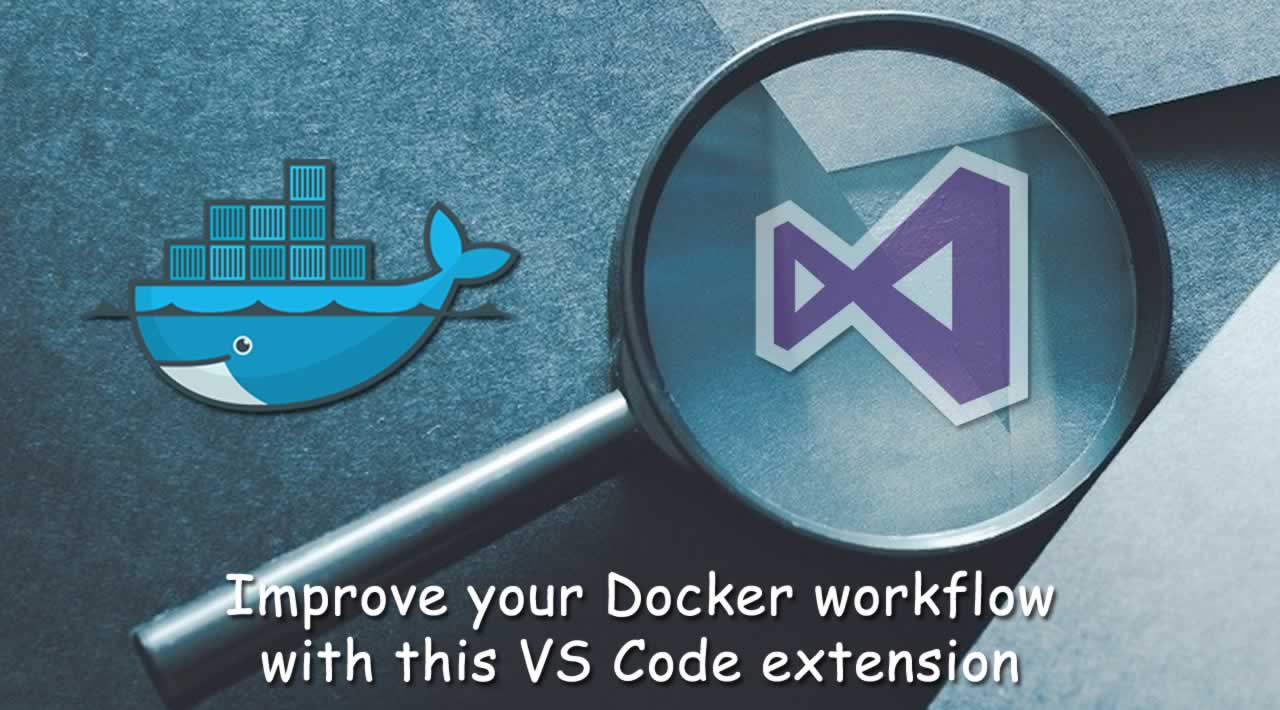 There are quite a few things you will need to do as part of your Docker Workflow. You will spend a lot of your time at the terminal and a lot of your time authoring Dockerfiles and/or docker-compose.yaml. Luckily there exist an extension that can greatly help with that all of the above as well as deploying to the Cloud

There are quite a few things you will need to do as part of your Docker Workflow. You will spend a lot of your time at the terminal and a lot of your time authoring Dockerfiles and/or docker-compose.yaml. Luckily there exist an extension that can greatly help with that all of the above as well as deploying to the Cloud

There are some actions we keep on doing when dealing with Docker. Those are:

We are likely to spend a lot of our time in the terminal unless we have something like Docker Kitematic at our disposal or some similar tool.

The point of this article is to present a Visual Studio Code Extension that can really help your workflow. So what can it do?

We install this like we would install any extension. We open up our Visual Studio Code and press the extension button and type Docker, like so:

There are two ways we can go about this:

Bring up your command menu CMD +SHIFT + P on a Mac and start typing Docker. It should show you this

Then we are prompted with the following Select platform

We go with Node.js cause that's what we are trying to build. If you have a Go or .Net Core project, select that instead.

Lastly we are asked to select a port, we go with the default suggested 3000.

Ok then, what did we get from this? We got:

Dockerfile Let's look at the Dockerfile for example

Above we see that everything is done for us. It has

Quite impressive !. Of course, we still need to author our app

It has set everything up in terms of how to build the image, set an environment variable and mapped a port

docker-compose.debug.yml This gives us a very similar looking file as that of docker-compose.yml but with the difference of it running node in inspect mode, like so command: node --inspect index.js

.dockerignore This file contains a lot of good patterns that match files that we don't want to copy over like node_modules, .git, .env, Dockerfile. You might want to adjust this file to fit your needs.

Ok. Let's look at a scenario where we do everything from scratch. Let's start off by creating a Dockerfile.

Let's start typing FROM. As you can see below we get help with typing the command and what it should look like

We keep on typing the name of our baseImage, in this case, we are looking for Node.js image so we start typing the character n. Below we get a list of options matching what we are typing. It lists the base images by popularity and also adds some useful information so we understand what we are getting:

Next thing we try to type is ENV but we only get as far as E before it starts suggesting what command we are writing and how to type it:

As you can see it's quite helpful in how we should type the command.

Next up is WORKDIR and it shows us:

Not only is it telling is how to type the command but tells us that it affects commands like COPY and ADD etc.

At this point we want to tell it to copy some files we might need before running commands like installing a library:

This gives us the two different ways in which we can copy things relative or absolute.

As mentioned we want to run a command so we can install things. Our auto complete tells us the following:

Again it suggests what kind of commands that might be.

This far in the Dockerfile we might want to COPY our application files and we've already shown you how to use the autocomplete for that so let's look at EXPOSE:

As you can see it shows all the different ways in which you can export a port, really educational.

Ok, one more command is usually needed at this point either we use a CMD or ENTRYPOINT to start up our app in the container:

We will use the Command Palette here. It is almost a ridiculous amount of commands that it lets us invoke. Let's try to mention them by topic though. The Command Palette consists of a long long list of Docker commands. We can

Let's focus on getting an app up and running.

Ok, this is a really simple app so let's turn it into a Node.js app by going to the terminal and run

followed by adding the following to app.js:

lastly update package.json by adding the following to scripts:

Now we are ready!

For all below commands, bring up the command palette with View / Command Palette from the menu or invoke the short command, for Mac it is CMD + SHIFT + P

Start typing Docker: Build, the autocomplete will narrow down the choices. Invoke the suggested command.

This will ask us if we want to use the Dockerfile where we are standing and what to tag the image with. After we've done our choices it set's about pulling down the base images and carries out all the commands in the Dockerfile. Once it's done you should be able to see the newly built image by typing docker images and look for the tag name that you gave it, it should be listed on top.

Start typing Docker: Run and take the command it suggests. This will give you a list of Docker images you could run. Looking at the command it invokes in the terminal it looks like so: docker run --rm -d -p 3000:3000/tcp articles:latest

Of course, we can leverage the power of Docker Compose, both up and down.

Start typing Docker: Compose Up, this will create the Docker images the first time it's run followed by running the containers. Verify this with docker ps. Additionally, we have Docker: Compose Down and Docker Compose Restart.

At the bottom of your action bar, you should have an icon that looks like a Docker whale. Clicking that and you should be faced with: 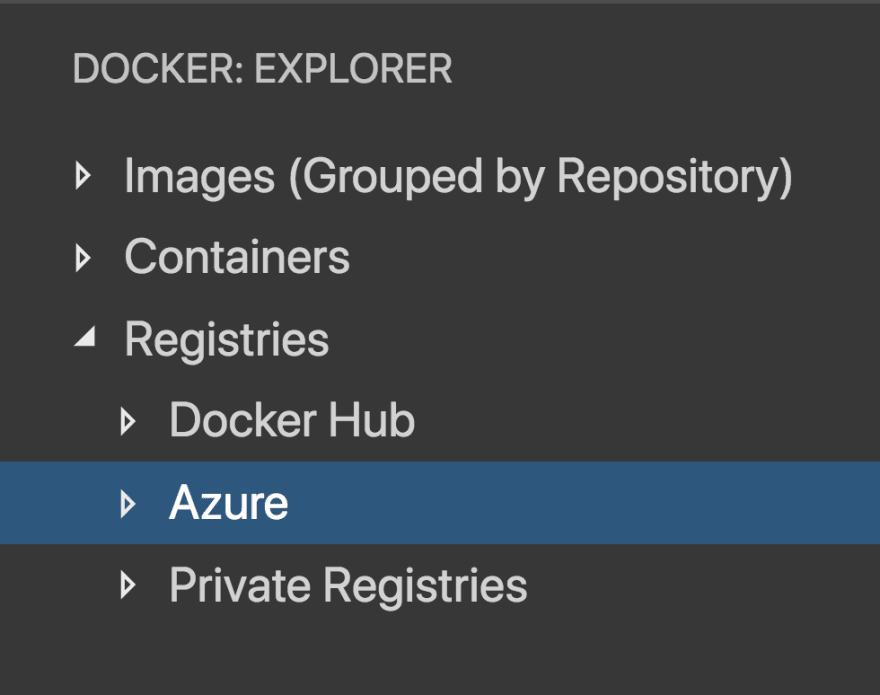 As you can see above you can view all the images on your machine but you can also look in different registries such as Docker Hub, Azure and if you've added any private registries. To use the Azure one you would need the Azure Account extension installed. Once that is installed you should see something like this:

There are more commands we can carry out if we right-click on an a Docker image in our container registry in Azure:

As you can see we can look at our resource in the portal. We can remove the entire repository but we can also PULL down whatever is there to our local machine.

There is one way to deploy to the Cloud:

This article Article covering this extension says deployment from Container Registry should be possible. I'm sure it is, I just couldn't figure it out how to do it from the extension. I will update the articles as soon as I do figure it out. 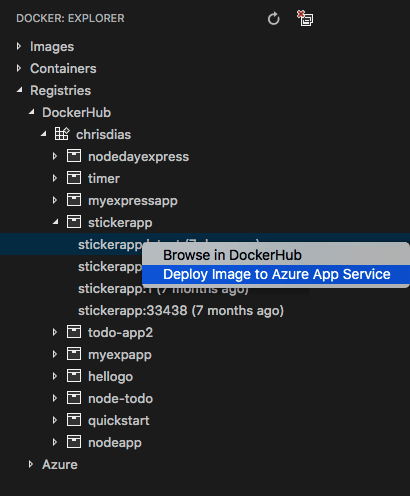 We've shown you a lot of things you can do with this Visual Studio Code extension. You can manage your images, containers and do all sort of things with them like build them, run them, see the logs and even bring them to the Cloud.

I hope you found this useful and that you give the extension a go.