Python… the most popular and favorite programming language in the world for programmers of all age groups. If you are a beginner this language is strongly recommended to learn first. Well, In programming, we all know the importance of code editor and IDEs to write our program and to execute it but choosing the best code editor or IDE is always a confusing question. Understand that the best code editor or IDE depends on so many things such as programming language, project type, project size, OS support and considering a lot of other features. If we talk about Python so this language is also not an exception.

We are going to discuss the code editor or IDEs for Python.

What is Your Level?

Which Hardware Do You Have?

So, Here is the list of some of the best IDE and Code Editor for Python.

PyCharm is one of the best Python IDE available having number of amazing and powerful features which allows you to develop variety of Python Applications.

For beginner programmer, using PyCharm can be a little challenging. However, PyCharm have a great Community Support. So, troubleshooting in PyCharm will be very easy and quick for you.

You can choose the pre-built theme or you can also customize the IDE of PyCharm based on your need or requirement.

There are 2 versions of PyCharm available for download. One is PyCharm Community, which is free and dedicated for Python Development.

Whereas other one is PyCharm Professional is paid and have a built-n support for number of other technologies.

Features: Here are some of the Top Features of PyCharm IDE.

Spyder is a cross platform IDE, so it is available for Windows, macOS and Linux.

It is dedicatedly designed for Data Scientists and Engineers. As it is very well integrated with the libraries like – Numpy, Pandas, Matplotlib, SciPy and many more.

So, if you are into Data Science or Machine Learning, then Spyder is the IDE you should go with.

People often compare Spyder with PyCharm. Spyder IDE have a less features a compared to PyCharm.

However, Spyder is a light weight IDE, as a result quite fast as compared to PyCharm IDE.

Features: Here are the Top Features of Spyder IDE.

If you know Eclipse, which is one of the most popular IDE among Java Developers. Now, with the help of PyDev(Eclipse Plugin), you can create the Environment for Python Development as well.

With PyDev, you will get lots of features, like – Advance Debugging, Django Integration, Auto Code Completion, Syntax and Error Highlighting and many more.

So, if you already a Eclipse user, then PyDev is the best IDE you should go with.

Features: Here are the Top Features of PyDev IDE.

Atom is a cross platform Code Editor, which was developed by Github using the popular framework Electron.

Atom is really easy to use because of it’s simple User Interface and You can also customize the UI according to your need.

Atom is a Code Editor, however it has all the basic functionality of an IDE as well. It support most of the popular Programming Languages, like – PHP, Java, Python, JavaScript, C++ and many more.

Features: Here are the Top Features of Atom Code Editor.

IDLE is a simple and light weight Python IDE, which automatically gets installed after the installation of Python on your computer.

IDLE is mostly used by beginner Programmer who are looking forward to learn Python Programming.

Therefore, it is not recommended for developing big Projects.

Features: Here are the Top Features of IDLE IDE.

Visual Studio Code is an amazing IDE developed by Microsoft. It have a really interactive and eye catching User Interface.

It is most popular IDE among developer for Python as well other Programming Languages.

It comes with a lots of cool features and extensions for different Programming Languages and Technologies.

I personally prefer VS Code over any other IDE because of it Interactive UI.

Sublime Text 3 is the most popular Code Editor among programming Community.

It is light weight and Cross Platform Code Editor which supports number of Programming Languages.

There are many Plugin available which will helps you customizing and changing the functionality of the Code Editor.

It provide a really good experience for Python Development.

Sublime Text is free to use. However, In sometime, you will be asked to buy a premium version of the Editor.

Thonny is a simple and cross platform IDE which was especially created for beginner Python Programmer.

So, if you are a beginner, then Thonny is the best IDE for you.

In Thonny IDE, a separate window has been created for each function call, which will help you understanding the actual working a program.

Features: Here are the Top Features of Thonny IDE.

Jupyter is a simple and dedicated IDE for Data Science.

So, if you have just started your Data Science Journey, then this is the tool you must use.

As Jupyter comes with the lots of Data Science libraries, like – Pandas, Matplotlib, Numpy and many more.

It also supports number of other Programming Languages other then Python.

Features: Here are the Top Features of Jupyter IDE.

Vim is a quite simple but very helpful Code Editor among the Developer Community.

If you are a command prompt or terminal lover, then you will love Vim editor. As Vim is a Editor which you can use in your terminal as well.

Vim is used for Text Editing as well as for Code Editing and supports most of the Programming Languages.

It comes pre-installed on Linux and macOS.

Vim has a lots of Shortcut Key available and you can extend the functionality by adding more Plugin as well.

Features: Here are the Top Features of Vim Code Editor.

Hope you like the article, If you have any suggestion or other IDE, which should be in this list. Let me know in the comment section below. 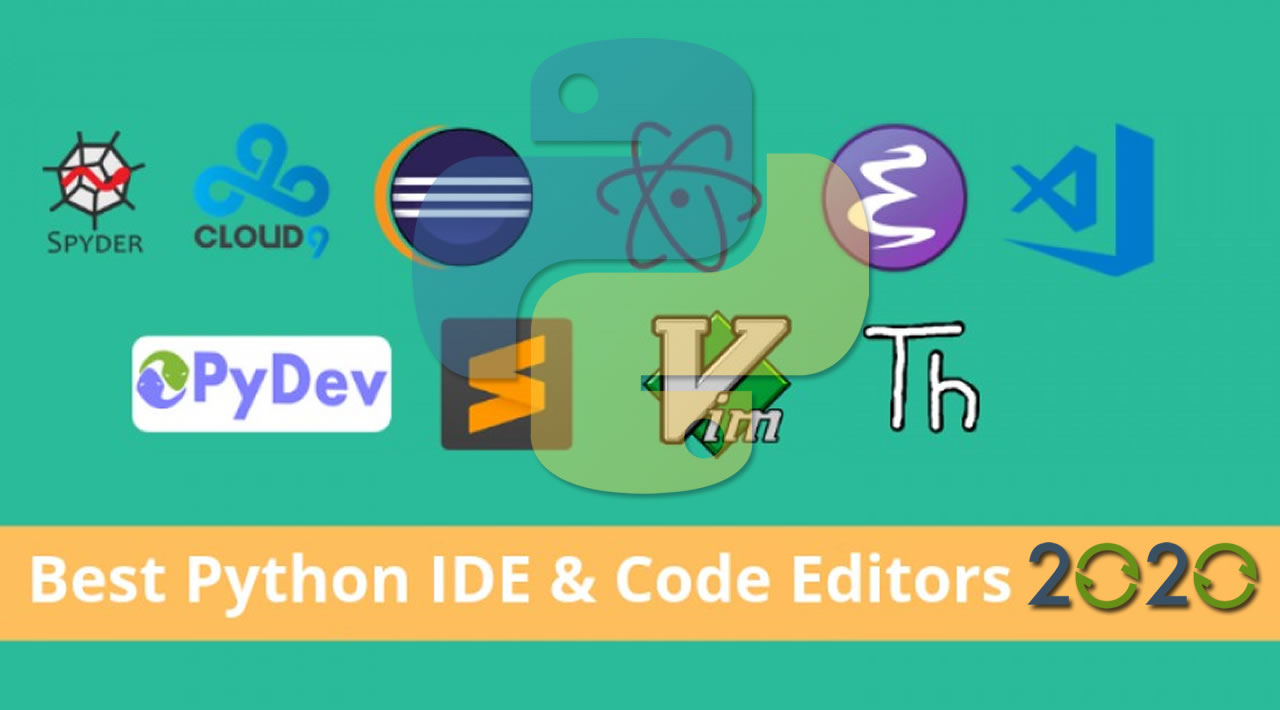 In this post, we’ll discuss what is an IDE/ Code editor, the difference between IDE & Code editors, and some of the best Python IDE_s & code editors_, along with their best features.

Python is a multi-faceted programming language that has been embraced globally with open arms. Python comes with innumerable useful features of simplicity, faster execution of programs, an enormous collection of packages, libraries, and much more!

Today, it is the Github’s 2nd most popular language after JavaScript and the most popular one for machine learning. Python is the first choice of several diverse projects ranging from web applications to being deployed into artificial intelligence, machine learning, Deep Learning, and more.

Code editors/ IDEs are the first points of contact with any programming language, so its selection is a very crucial factor in deciding the future journey or workflow of a project.

We always have the option to code onto a notepad. However, it is a known fact that Python IDEs & code editors can dramatically boost the productivity and efficiency of a programmer. So, knowing about their key features and benefits is a must for a** python developer**.