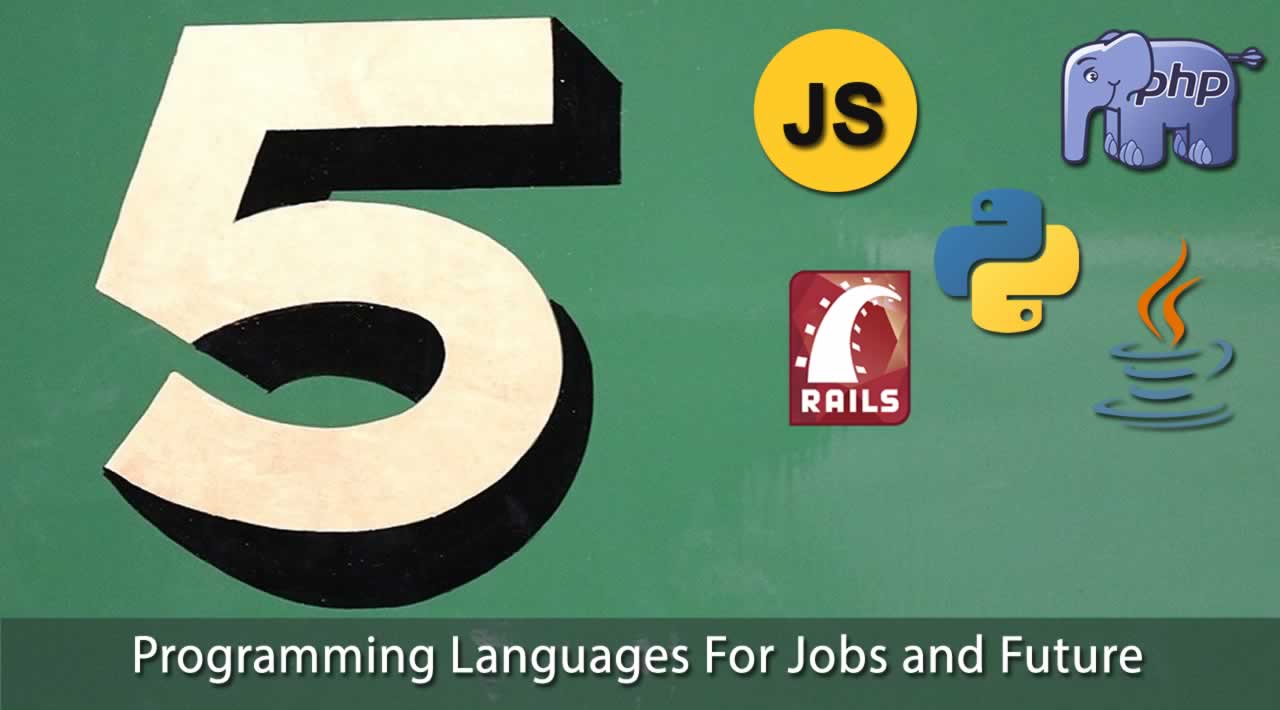 Sometimes it is difficult to find the best out of the rest. Here are the top five programming languages and their job rates and future scope.

Before starting with languages, let’s brief that what is programming language is?

The programming language is a language that contains a set of instructions that produce various kinds of outputs. It is used in computer programming to execute algorithms.

Thousands of different programming languages built and many more created every year but only a few implemented in the market or used by developers.

Top Programming Languages and Their Jobs and Future Scopes

The most essential skill to learn in today’s scenario is how to write a computer program. The programming and developer communities are emerging at a rate faster than ever before.

It is a general-purpose programming language, which is used to build easy and tools and libraries. For backend web development, artificial intelligence, data analysis, and scientific computing- python is a great language.

There are many developers who use python and find it simple and easy to learning. Therefore, they have used python to build productivity tools, games, and desktop applications.

Today, Python has multiple implementations including Jython, scripted in Java language for Java Virtual Machine; IronPython has written in C# for the Common Language Infrastructure, and PyPy version written in RPython and translated into C.

While these implementations work in the native language they are written in, they are also capable of interacting with other languages through the use of modules. Most of these modules work on the community development model and are open-source and free.

The various application of the Python language is a combination of features which give this language advantages.

JS is the high-level, interpreted scripting language which follows the ECMAScript specification. It is the multi-paradigm, supporting object-oriented, dynamic, imperative, declarative and a prototype-based language.

Even it’s used in many non-browser environments. Javascript is an easy and the language that is used to design or program the webpages. Also, for controlling webpage behavior.

In Javascript, the basic syntax, intentionally related to Java and c++ languages to reduce the number of new concepts required to learn this language.

But “Javascript has not interpreted java”. The language constructs are such as:

A Javascript web server would host an object that represents HTTP request and response objects for the Javascript program to generate dynamic web pages. The most popular example of Javascript is Node.js.

There are some databases like MongoDB and CouchDB which use Javascript as their programming language. 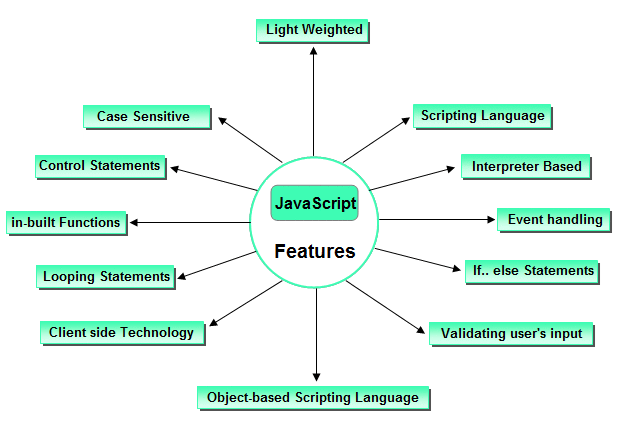 There are so many options for freshers or experienced people:

No doubt that there are various frameworks (Vue.js, jQuery, Angular.js, and React.js) that have their own established in the market which is constantly growing as well as some frameworks might fail in future and some continually grow. 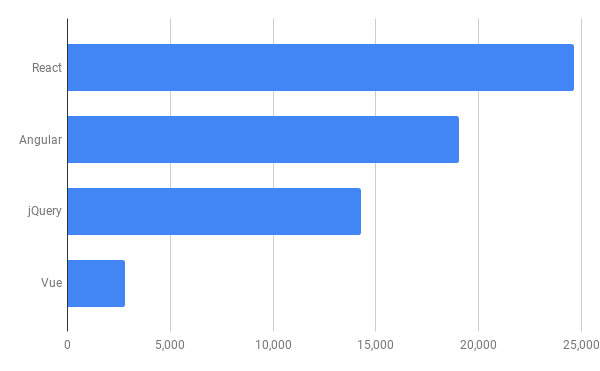 Looking at the statistics and market position, it does not seem that react.js will leave its popularity in recent times as well as in the future.

The future, however, it will be a hybrid of everything available today. Where one framework, which is defined as the easiest to adopt by developers and proposes a complete solution, uses complementary techniques such as web components, web assembly, and AI, to create an end to end solution for developing applications.

It is a general-purpose programming language that is class-based, and object-oriented. Java code can run anywhere or on all platforms that support Java without the need for recompilation. Java applications are typically compiled to bytecode that can run on any Java virtual machine (JVM). The syntax of Java is similar to C and C++.

Java Is Popular Because

[Important] The latest version is Java 12 which is released in March 2019. 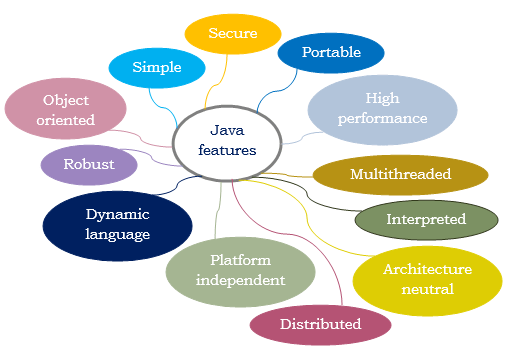 There are many career options with Java: 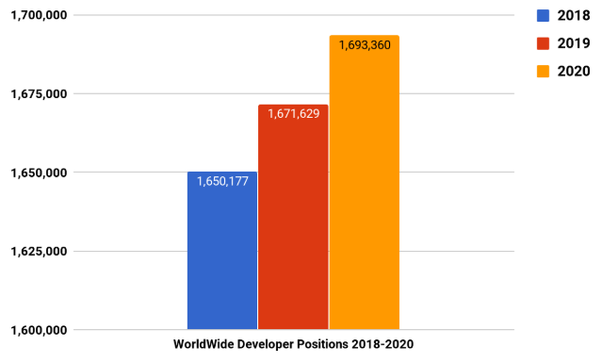 In the above graph, you find three years of representation of developers' positions.

Java is the one outstanding Android versatile application that improving the market. The popularity of Java is high than other programming languages.

No doubt that java would have an amazing future, as it is a future-oriented programming language for years. Secondly, Java has brought many new concepts in which the most significant one is the security of applications and programs. So, in the upcoming years, business organizations find Java applications more secure.

It is an interpreted, high-level, general-purpose programming. Ruby is used to collecting garbage, it is a dynamic type of language that supports multiple programming paradigms. Also, it includes procedural, object-oriented and functional programming.

Rails is a development tool that gives web developers a framework and a structure to write code. It simply helps to build websites and applications. ” Convention over configuration” is the key principle of Ruby.

Why Developers Go With Ruby on Rails? 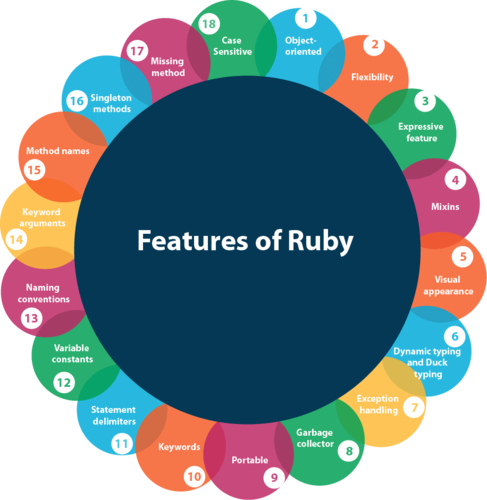 As now ruby on rail becomes the popular programming language. Ruby on rails entry-level jobs is Junior programmer and co-developers. As well as the experienced person gets the good opportunity of high-position jobs like chief technology officer, project leader, and senior developers. With these amazing jobs, they get an annual salary which is starts at $100,000 to $154,000.

Future of Ruby on Rail

After watching the career scope of Ruby, it looks like Ruby has a huge and bright future because it is—

Hypertext Preprocessor (PHP) is a general-purpose programming language, which is designed for web development. PHP code is usually processed by a PHP interpreter as a module in the webserver secondly, the PHP code executed with a command-line interface (CLI). It is a scripting language that adopts to server-side web development. So, it can be used for client-side GUI and command-line scripting. Many web hosting providers support PHP for their clients. Also, PHP is free of cost.

The main use of PHP is that it acts like a filter, which takes input from text and converts it into output another stream. And it common output as HTML. PHP main focuses on the server-side scripting languages that provide dynamic content from a webserver to the client. 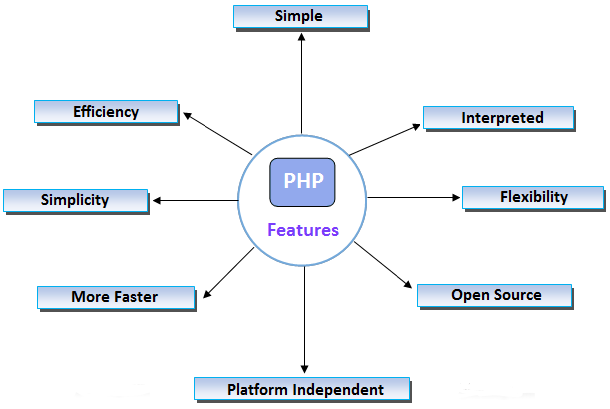 Some features of PHP.

Becoming a PHP developer can open several doors throughout your career. The first step up the ladder from this position is a senior web developer job.

In this role, your responsibilities encompass all aspects of creating websites and software, including the supervision of PHP. From the position of a senior web developer, you can go on to become an IT manager, development director, Chief Technology Officer, or a senior .NET developer. These are just a few options you can take depending on your other qualifications. 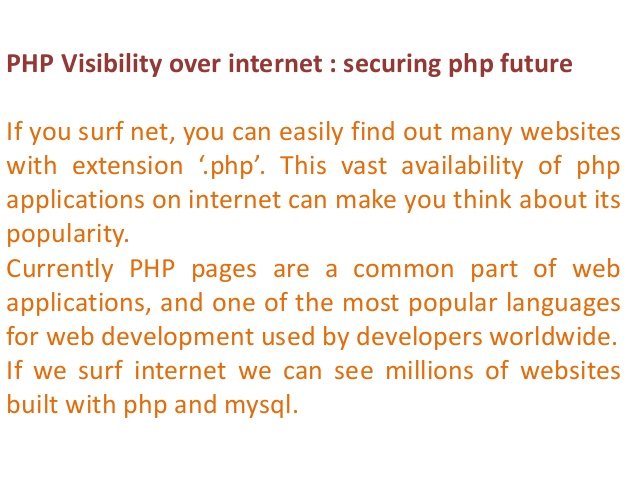