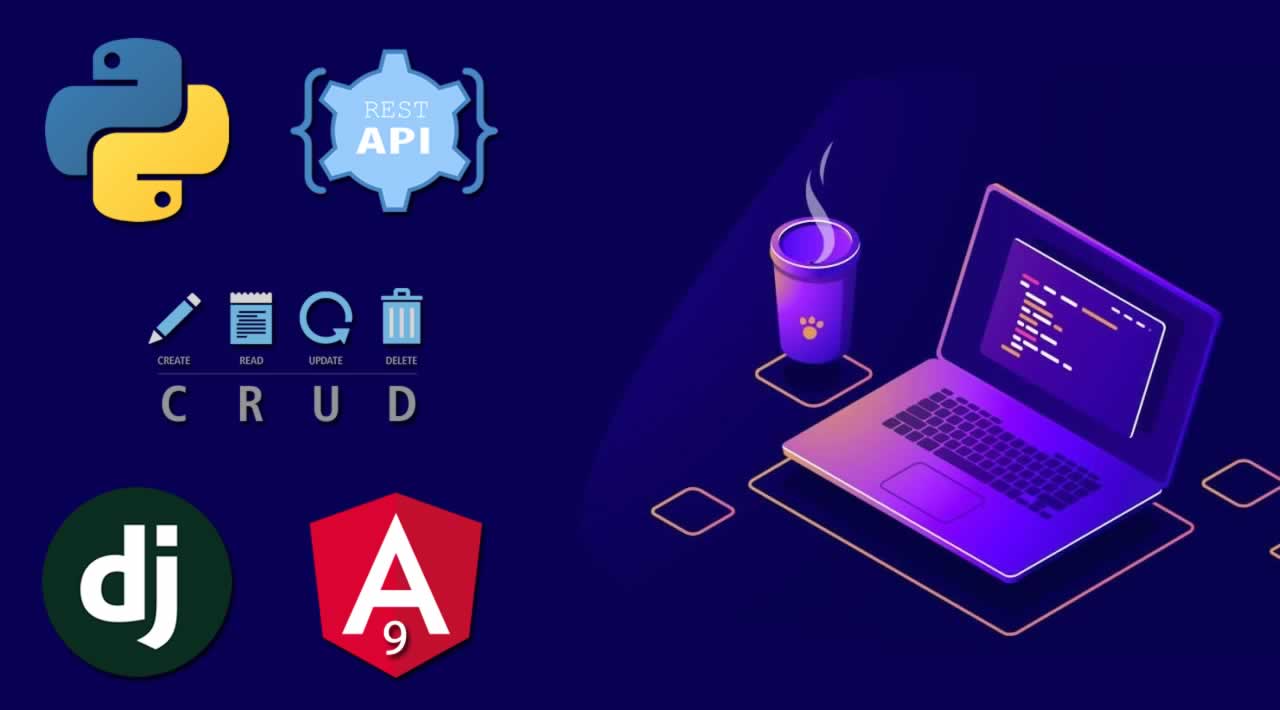 This Angular 9 CRUD tutorial explains how to use Angular 9 to build front-end apps for their back-end REST APIs. Using Python & Django as the backend or use JSON-Server to mock the API if you don't want to deal with Python. Learn Angular 9 by example by building a full-stack CRUD — Create, Read, Update and Delete — web application

This tutorial is designed for developers that want to use Angular 9 to build front-end apps for their back-end REST APIs. You can either use Python & Django as the backend or use JSON-Server to mock the API if you don't want to deal with Python. We'll be showing both ways in this tutorial.

You will see by example how to build a CRUD REST API with Python.

The new features of Angular 9 include better performance and smaller bundles thanks to Ivy.

Throughout this tutorial, designed for beginners, you'll learn Angular by example by building a full-stack CRUD — Create, Read, Update and Delete — web application using the latest version of the most popular framework and platform for building mobile and desktop client side applications (also called SPAs or Single Page Applications), created and used internally by Google.

In the back-end we'll use Python with Django, the most popular pythonic web framework designed for perfectionists with deadlines.

In nutshell, you'll learn to generate apps, components and services and add routing.

You'll also learn to use various features such as HttpClient for sending AJAX requests and HTTP calls and subscribing to RxJS 6 Observables etc.

By the end of this tutorial, you'll learn by building a real world example application:

You will need to have the following prerequisites in order to follow this tutorial:

If you have these requirements, you are good to go!

We'll be using a Python REST API that we have created in this tutorial. Go ahead and clone the project's code from GitHub using the following command:

Next, create and activate a virtual environment:

Next, navigate to your CRM project and install the requirements using pip:

Finally, you can run the development server using the following command:

Your REST API will be available from the http://localhost:8000/ address with CORS enabled.

If you don't want to use a real Python & Django REST API server, you can also use json-server to quickly mock the REST API.

Next, create a folder for your server and create a JSON file (data.json) with the following content:

We added empty entries for JSON data. Feel free to add your own data or use a tool like Faker.js to automatically generate fake data.

Next, you need to start the JSON server using:

Your REST API server will be running at http://localhost:3000.

We'll have the following resources exposed:

This is nearly the same REST API exposed by our real Python REST API server.

The example Angular application we'll be building is the front-end for the CRM RESTful API that will allow you to create accounts, contacts and activities. It's a perfect example for a CRUD (Create, Read, Update and Delete) application built as an SPA (Single Page Application). The example application is work on progress so we'll be building it through a series of tutorials and will be updated to contain advanced features such as RxJS and JWT authentication.

Make sure you have Node.js installed, next run the following command in your terminal to install Angular CLI 9:

At the time of this writing @angular/cli v9.0.0-rc will be installed.

Before the final release of Angular 9, you will need to use the @next tag to install the pre-release version.

You can check the installed version by running the following command:

Now, you're ready to create a project using Angular CLI 9. Simply run the following command in your terminal:

The CLI will automatically generate a bunch of files common to most Angular projects and install the required dependencies for your project.

Next, you can serve your application locally using the following commands:

The command will compile our project and finally will display the ** Angular Live Development Server is listening on localhost:4200, open your browser on http://localhost:4200/ ** ℹ ｢wdm｣: Compiled successfully. message.

This means, your application is running at http://localhost:4200.

A component is a TypeScript class with an HTML template and an optional set of CSS styles that control a part of the screen.

Components are the most important concept in Angular. An Angular application is basically a tree of components with a root component (the famous AppComponent). The root component is the one contained in the bootstrap array in the main NgModule module defined in the app.module.ts file.

One important aspect of components is re-usability. A component can be re-used throughout the application and even in other applications. Common and repeatable code that performs a certain task can be encapsulated into a re-usable component that can be called whenever we need the functionality it provides.

An Angular application is made of several components forming a tree structure with parent and child components.

A component is an independent block of a big system (web application) that communicates with the other building blocks (components) of the system using inputs and outputs. A component has an associated view, data and behavior and may have parent and child components.

Let's now see this practically. Head over to your Angular project folder and open the src/app folder. You will find the following files:

Except for the last file which contains the declaration of the application main (root) Module, all these files are used to create a component. It's the AppComponent: The root component of our application. All other components we are going to create next will be direct or un-direct children of the root component.

Go ahead and open the src/app/app.component.ts file and let's understand the code behind the root component of the application.

First, this is the code:

The export keyword is used to export the component so that it can be imported from other components and modules in the application.

The title variable is a member variable that holds the string 'app'. There is nothing special about this variable and it's not a part of the canonical definition of an Angular component.

Now let's see the corresponding template for this component. If you open src/app/app.component.html this is what you'll find:

The template is a normal HTML file (almost all HTML tags are valid to be used inside Angular templates except for some tags such as <script>, <html> and <body>) with the exception that it can contain template variables (in this case the title variable) or expressions (``) that can be used to insert values in the DOM dynamically. This is called interpolation or data binding. You can find more information about templates from the docs.

You can also use other components directly inside Angular templates (via the selector property) just like normal HTML.

After getting the theory behind Angular components, let's now create the components for our simple CRM application.

Our REST API, built either with Django or JSON-Server, exposes these endpoints:

Let's use the Angular CLI to create the components. Open a new terminal and run the following commands:

This is the output of the first command:

You can see that the command generates all the files to define a component and also updates src/app/app.module.ts to include the component.

If you open src/app/app.module.ts after running all commands, you can see that all components are automatically added to the AppModule declarations array:

Note: If you are creating components manually, you need to make sure to include them manually so they can be recognized as part of the module.

Now that we've created the various components, let's set up HttpClient in our Angular 9 project to consume the RESTful API back-end.

You simply need to add HttpClientModule to the imports array of the main application module:

We can now use HttpClient in our application.

A service is a global class that can be injected in any component. It's used to encapsulate code that can be common between multiple components in one place instead of repeating it throughout various components.

Now, let's create the services that encapsulates all the code needed for interacting with the REST API. Using Angular CLI 8 run the following commands:

Note: Since we have multiple services, we can put them in a services folder or whatever you want to call it.

Injecting HttpClient in the Services

Open the src/app/services/contact.service.ts file then import and inject HttpClient:

Note: You will need to do the same for the other services.

Angular provides a way to register services/providers directly in the @Injectable() decorator by using the new providedIn attribute. This attribute accepts any module of your application or 'root' for the main app module. Now you don't have to include your service in the providers array of your module.

Throughout this tutorial for beginners, we've seen, by building a simple real world CRUD example, how to use different Angular 9 concepts to create simple full-stack CRUD application.

How to Build a Chat application with Django, Python and React

This Python tutorial will explain how to build a chat application with Python, Django and React. In this post, we will use Stream, an API for chat that takes care of WebSocket connections and other heavy lifting using Go, Raft and RocksDB. Let's go Building a Chat application with Django, Python and React