Java Vs Python: Which Programming Language is Best for Startup? ***Quick Summary:** Today, entrepreneurs are in the dilemma about developing their enterprise app development because there is a difficult decision to make- Which language to choose for their business app development? Java and Python both have...

Quick Summary: Today, entrepreneurs are in the dilemma about developing their enterprise app development because there is a difficult decision to make- Which language to choose for their business app development? Java and Python both have their pros and cons, and both come with a set of similarities. However, Java Vs Python has its own differences as well. The trickiest choice is to select between the two master languages for entrepreneurs who want to digitize their startups. You might have read about the difference between these two- depending upon your project needs from a technical perspective. This blog gives eye-opening insights when choosing between Java Vs Python in 2020.

An entrepreneur’s most precarious decision before taking their business to the next level is to decide the programming language for their software and app development. The bizarre dilemma that executes in the minds of such enthusiastic startup owners is a struggling battle.

Java Vs Python: Which is best?

Java Vs Python in 2020: Which is better for my business app development?

Java vs. Python: Which should you choose?

Such questions hover above the businessmen as they are eager to transform their company onto a digital platform. One such conundrum between two tech-enthusiast entrepreneurs turned up into a fierce battle. Eric prefers Java, and Lee Favors Python. Both of them put up their perspectives and prominent reasons for their peculiar choices. 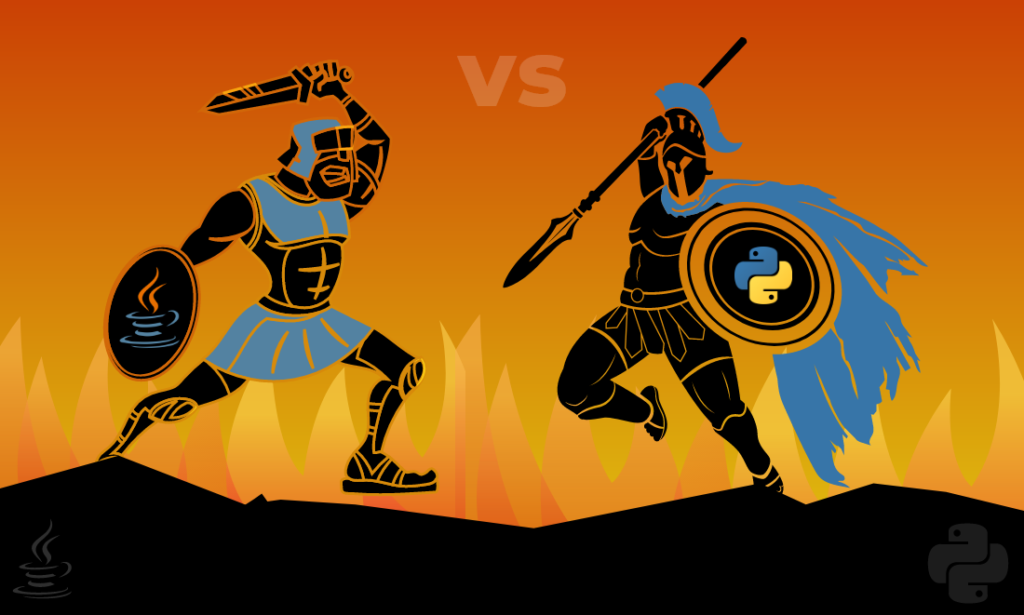 This blog post will help you decide the right programming language for your enterprise app development. It is said that you always learn from other’s experiences. Let us find out what Lee and Eric have to say and see who wins the debate. Your entrepreneurial solution awaits you; hop on the journey.

The Debate Java Vs Python Comparison Starts With Hand Shake

Lee and Eric sit across from each other and debate Java Vs Python with a firm handshake. Instead of fighting, both try to enlighten the other one about their preferred programming language for app development.

Round One Introduction to the Languages

Eric explains Lee about Java right from scratch: an object-oriented and general-purpose language that is a genuine fit for varied web, mobile, and enterprise applications. Eric admits that Java is a compiled language.

Lee immediately prompts by bringing in Python a high-level programming language that has proven its worth in AI, machine learning, web development, data science, and automation. He adds up saying that Python is an interpreted language. Object-oriented programming in Java Vs Python is a never-ending discussion.

The moderator asks both the contenders to bring up their points one by one, as he categorizes Python and Java on various aspects like community support, popularity, performance, cost-effectiveness, security, and future trends, etc.

Round Two Java Vs Python: Who Is Winning the Battle of popularity?

We all know about the popularity of both these standard programming languages, still, let’s see what Eric and Lee are mentioning.

Lee starts to point out that Python was released early comparatively, in 1991, which makes it worthy of an old and proven programming language. Eric adds to the point that Java was just launched a few years after Python in 1995.

Eric states that Java is a popular choice for most developers, which makes it technically popular amongst the tech-people. However, Lee mentions that Python was the fastest-growing programming language in the last two years. Check out the current Google trend comparing Java Vs Python popularity.

Round Three Java Vs. Python: Which Is More Cost-Effective?

Just like Eric and Lee, all business owners first calculate the cost of their investments and the risks lying ahead. Especially when you decide to go digital, the choice of a programming language is a critical one.

Whereas, Lee tells us about the cost-benefits of Python: though hiring Python developers may be higher, it’s the best version of your application that counts the most. Entrepreneurs might have to pay comparatively high hourly-salary to Python developers, but the AI/ML integration in your Python application will ultimately turn your cost into your benefits.

Hence, Lee says that Python development is like an investment venture. It brings advantages in the future.

One tricky point for entrepreneurs is how their application is performing. The performance of your app matters the most to your customers. How long does it take to load your application? App-speed is vital, and for heavy applications, your programming language plays a crucial role in the development process.

Eric says that as Java is a compiled language and comes with its Java Virtual Machine JVM, programs are written in Java are faster than Python.

Lee comes to the point that though Python is comparatively slower, using specific libraries like CPython, PyPy, or Cython to increase your enterprise application speed. Know the solution for How to Optimize Python Performance? You can alternatively use Jython to compile Python code into Java bytecode, which improves app performance. 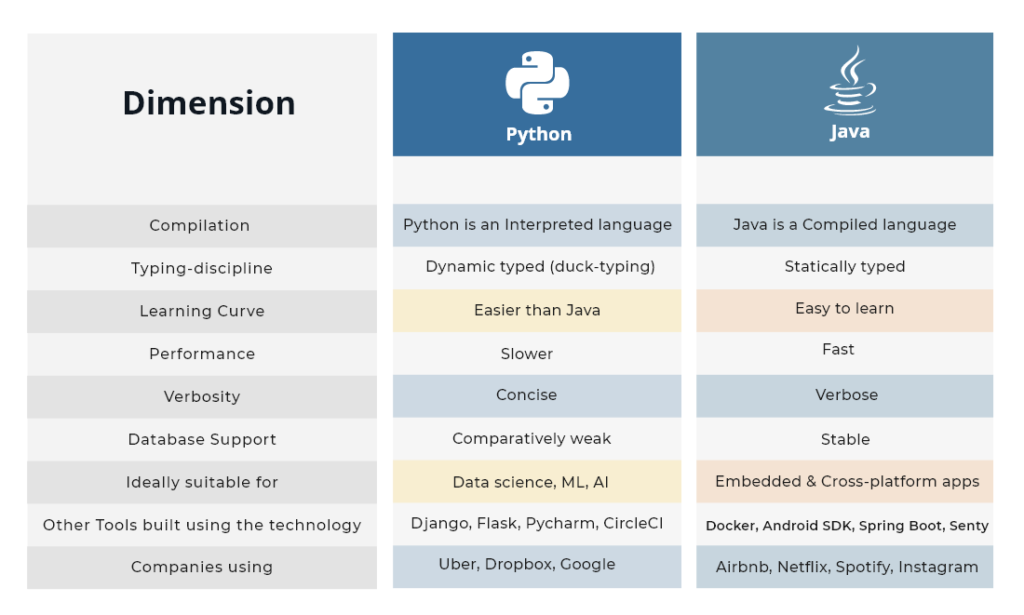 Modern digital businesses need modern and newer tactics to retain their customers. Python is a programming language that is a wholesome framework to accumulate all the much-essential characteristics of a successful current enterprise application. If you want to engage your users with data science, machine learning, or artificial intelligence incorporated in your application, I would highly recommend to hire Python developer from a renowned and leading Python app development company.

Suggested Read: Java Vs Python Comparison: Which Programming Language is Right for My Business?

Java vs. Python Comparison: The Battle of Best Programming Language in 2021

A guideline on Java Vs. Python to make an informed decision about which programming language to choose for your next product development.

How to Choose the Best Programming Language for Career 2020

It is very difficult to choose the best programming language for jobs today and for the future. Many new programming languages are emerging in the job markets. Each language is ahead of the other due to its uniqueness. Your interest in language selection comes first, and then comes the reputation of any language.