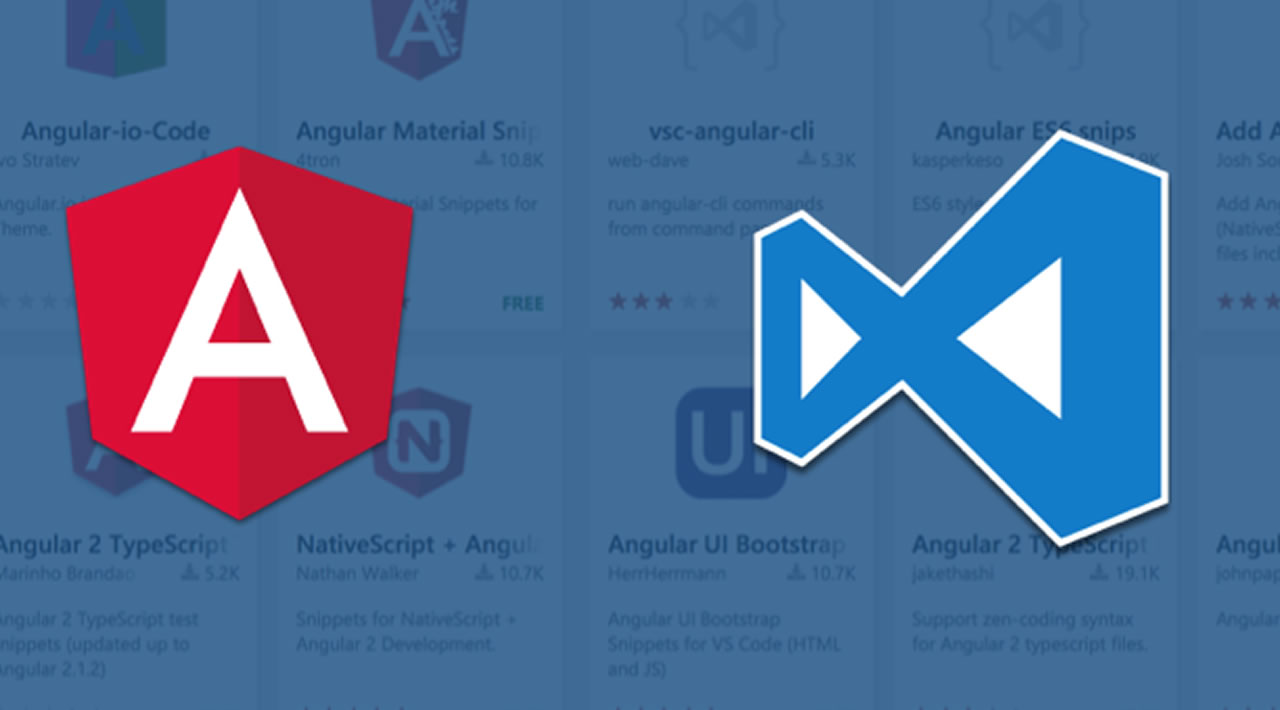 Angular is a popular JavaScript library for building web application user interfaces developed by Google. The Visual Studio Code editor supports Angular IntelliSense and code navigation out of the box.

Angular is a popular JavaScript library for building web application user interfaces developed by Google. The Visual Studio Code editor supports Angular IntelliSense and code navigation out of the box. 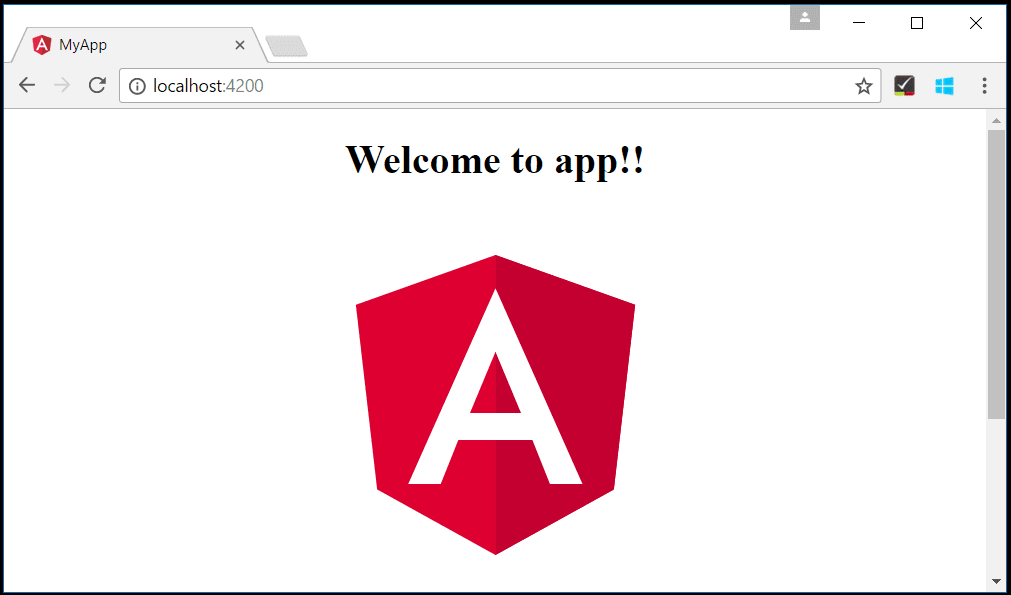 We'll be using the Angular CLI for this tutorial. To install and use the command line interface as well as run the Angular application server, you'll need the Node.js JavaScript runtime and npm (the Node.js package manager) installed. npm is included with Node.js which you can install from Node.js downloads.

Tip: To test that you have Node.js and npm correctly installed on your machine, you can type node --version and npm --version.

To install the Angular CLI, in a terminal or command prompt type:

This may take a few minutes to install. You can now create a new Angular application by typing:

my-app is the name of the folder for your application. This may take a few minutes to create the Angular application in TypeScript and install its dependencies.

Let's quickly run our Angular application by navigating to the new folder and typing ng serve to start the web server and open the application in a browser:

You should see "Welcome to app!!" on http://localhost:4200 in your browser. We'll leave the web server running while we look at the application with VS Code.

To open your Angular application in VS Code, open another terminal (or command prompt) and navigate to the my-app folder and type code .:

Now expand the src\app folder and select the app.component.ts file. You'll notice that VS Code has syntax highlighting for the various source code elements and, if you put the cursor on a parenthesis, the matching bracket is also selected.

As you hover your mouse over text in the file, you'll see that VS Code gives you information about key items in your source code. Items such as variables, classes and Angular decorators are a few examples where you'll be presented with this information. 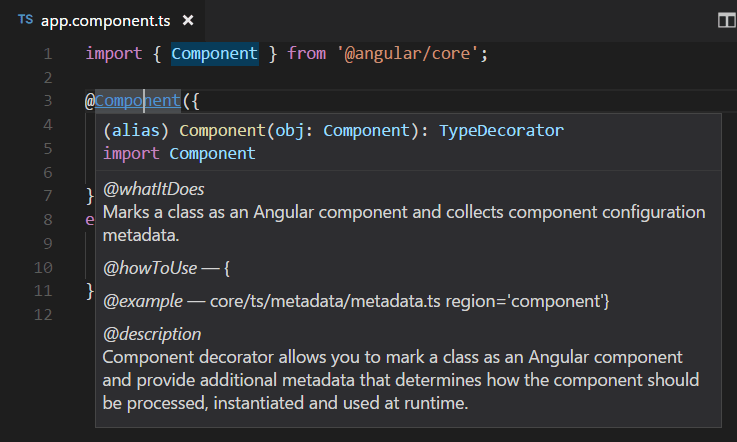 As you start typing in app.component.ts, you'll see smart suggestions and code snippets. 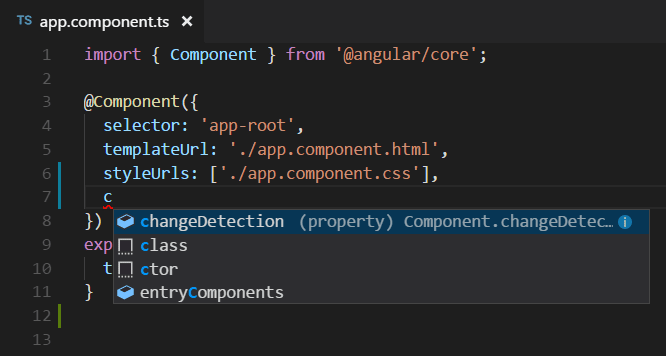 You can click the information button (i) to see a flyout with more documentation. 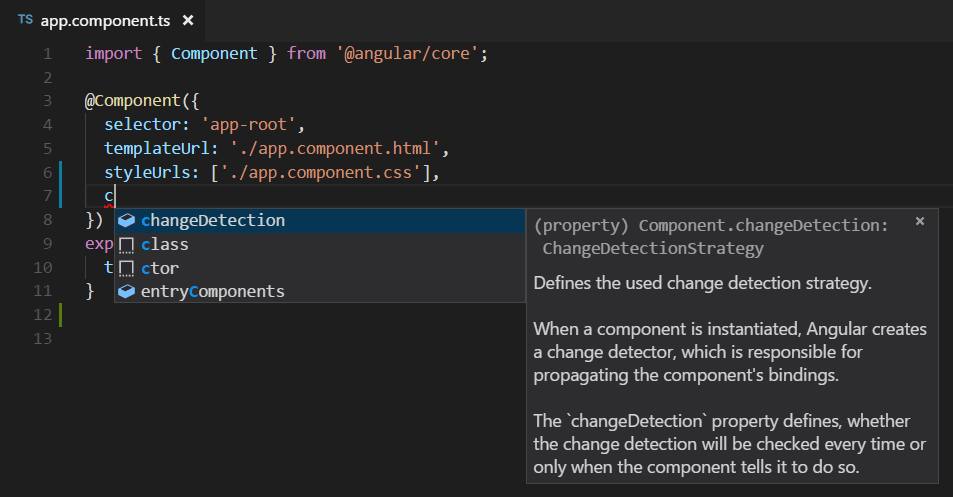 VS Code uses the TypeScript language service for code intelligence (IntelliSense) and it has a feature called Automatic Type Acquisition (ATA). ATA pulls down the npm Type Declaration files (*.d.ts) for the npm modules referenced in the package.json.

Through the TypeScript language service, VS Code can also provide type definition information in the editor through Go to Definition (F12) or Peek Definition (Alt+F12). Open the app.module.ts file and put the cursor over AppComponent in the bootstrap property declaration, right click and select Peek Definition. A Peek window will open showing the AppComponent definition from app.component.ts. 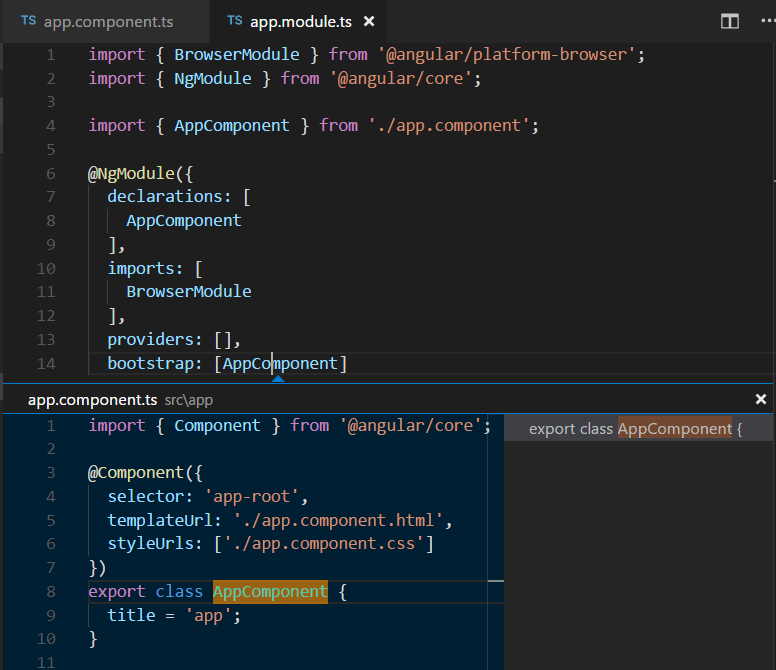 Once you save the app.component.ts file, the running instance of the server will update the web page and you'll see "Welcome to Hello World!!".

Tip: VS Code supports Auto Save, which by default saves your files after a delay. Check the Auto Save option in the File menu to turn on Auto Save or directly configure the files.autoSave user setting. 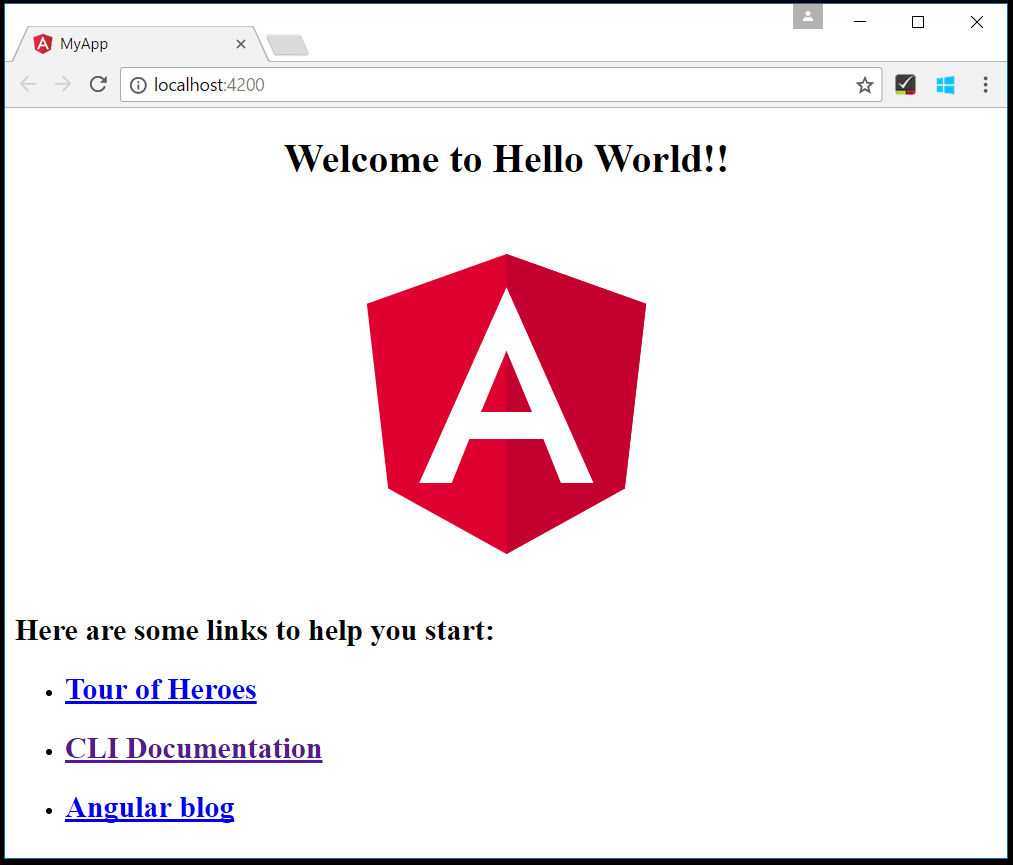 To debug the client side Angular code, we'll need to install the Debugger for Chrome extension.

Note: This tutorial assumes you have the Chrome browser installed. There are also debugger extensions for the Edge and Firefox browsers.

Press the Install button for Debugger for Chrome. 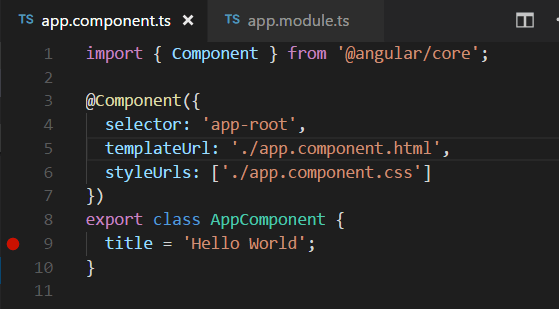 We need to make one change for our example: change the port of the url from 8080 to 4200. Your launch.json should look like this: 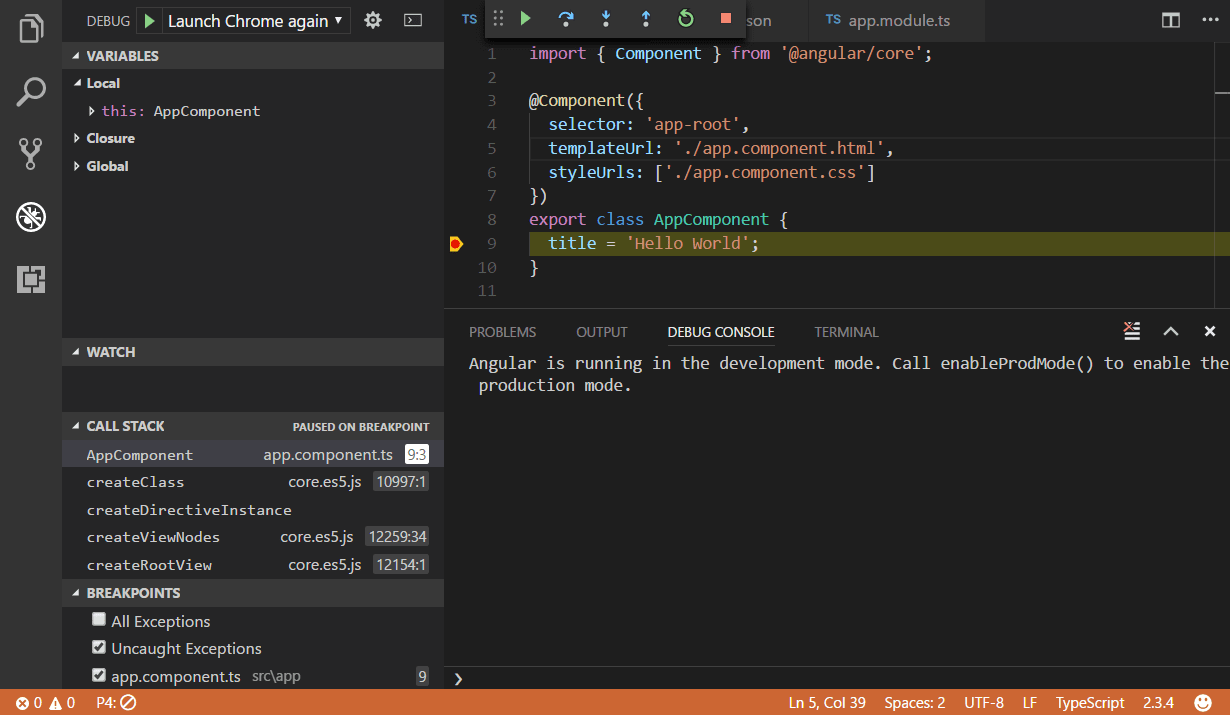 You can step through your source code (F10), inspect variables such as AppComponent, and see the call stack of the client side Angular application. 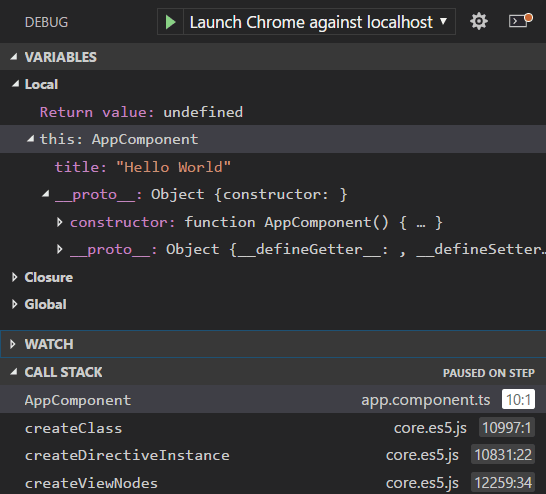 The Debugger for Chrome extension README has lots of information on other configurations, working with sourcemaps, and troubleshooting. You can review it directly within VS Code from the Extensions view by clicking on the extension item and opening the Details view.

The VS Code team has created recipes for more complex debugging scenarios. There you'll find the Chrome Debugging with Angular CLI recipe which also uses the Angular CLI and goes into detail on debugging the generated project's unit tests.

If you'd like to see a full MEAN (MongoDB, Express, Angular, Node.js) stack example, look at MEAN.JS. They have documentation and an application generator for a sample MEAN project. You'll need to install and start MongoDB, but you'll quickly have a MEAN application running. VS Code also has great MongoDB support through the Azure Cosmos DB extension.

React is another popular web framework. If you'd like to see an example of React working with VS Code, check out the Using React in VS Code tutorial. It will walk you through creating an React application and configuring the launch.json file for the Debugger for Chrome extension.

Learn Angular from Scratch and Go from Beginner to Advanced

In this Angular 9 PWA tutorial, we will use the most recent version of Angular 9 to build a Progressive Web Application (PWA) that works on mobile or any platform that uses a standard-compliant browser. Creating Progressive Web Apps Using Angular 9. How to convert the existing angular application to PWA? How to Add PWA features in an angular application? How to work with Service Workers? How to configure the add-to-home-screen feature using web manifest file? How to audit the PWA app with Google’s Lighthouse extension?

How to Use Angular CDK

In this post, I am going to show you how to create a reusable modal overlay/dialog using Angular CDK Overlay that can be reused inside our Angular project multiple times with ease. We are going to try and match the behavior and the functionality of Angular Material Dialog component, but using the UI Framework of our choice.